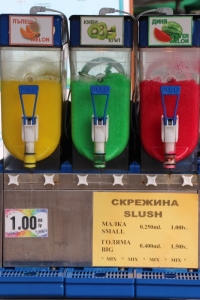 colourful drinks for sale in Sozopol. at the Bulgarian Black Sea Coast

Driving back from Turkey to Bulgaria, we were once again confronted with the differences between these two countries. Heading for the Black Sea Coast, we chose a different border crossing, this time, going north via Kirklaredi and the first Bulgarian village, Aziziye . A much smaller affair than the crossing at Edirme, to be sure, just one cubicle on each side, and nobody is really interested in you, or your car. A few formalities, forms, stamps, and in five minutes we are through. On the Turkish side, an excellent two- to four-lane road climbs up into the mountains, good quality tarmac, and there are even signposts to “Bulgaristan”. On the Bulgarian side – back in the EU, after all – a narrow, potholed road winds down to the first villages and towns, which are probably some of the most depressive we have seen so far. This is how things must have looked 25 years ago, communism at its best, only further run down, by now. The revolution hasn’t reached here, yet, that’s for sure.

For the next hour, or so, nothing changes. Communism still at its best. Desperate villages, decrepit houses, apartment buildings falling apart, nobody on the streets. But then we get closer to what I will call the Bulgarian Riviera, Bulgaria’s hot property zone, and center of international tourism. They didn’t go to Sofia, no, they come straight away to the Black Sea. And forget about loud Spanish-speaking groups, here the Russians rule. 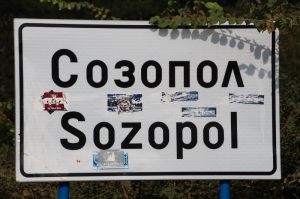 this helps to better understand the Cyrilic alphabet 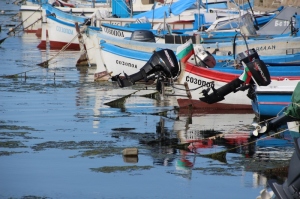 small boats in the fishing port of Sozopol 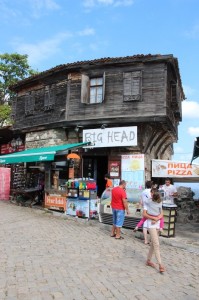 Sozopol has quite some attractive, authentic-looking wooden houses 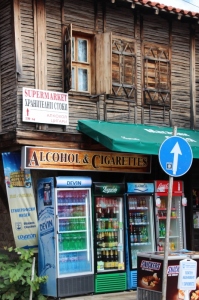 although the tourist trade has invaded them 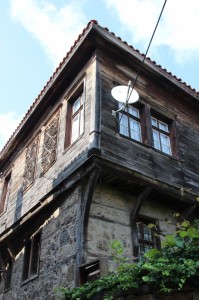 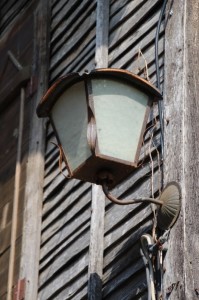 although not all facilities are new

Our first stop is Sozopol, ancient Apollonia, apparently, and a few ruins testify to the early presence of Greeks colonists and Roman occupationists. Nowadays, the invaders are the Russians, who have come not with weapons but with money – which is, perhaps, why there are billboards advertising guns. The old town, on a small peninsula, still has some authentic feel over it, the small fishing port still contains some fishing boats, and along the cobbled the streets the largely wooden houses have been tastefully restored. Although the hotel and restaurant trade is taking over, and tourist shops line some of the streets, one can still get away from it all by turning into the smaller alleys. The new town? We didn’t check, from a distance the resort hotels and condominiums didn’t look very promising, at least to us. And outside the fishing harbor? The Marina, with yachts in every size and prize, but mostly big and expensive: Sozopol, Saint Tropez of the Bulgarian Riviera. 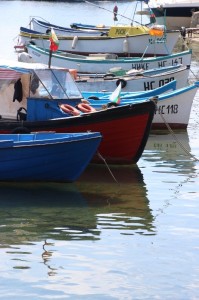 boats in the harbour of Nesebar 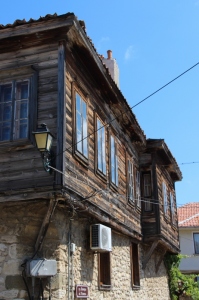 in Nesebar, too, wooden houses have been patched up, many now owned by foreigners

The presumed highlight of the Bulgarian Riviera is Nesabar, another peninsular town, also with a Greek and Roman history. Yet, the Greco-Roman connection is somewhat more difficult to imagine, with heavily restored ruins that look landscaped, manicured, and picture-perfect: good if you have no idea about Roman ruins – and what would the Russians know about Roman ruins, after all, that was one place the Romans didn’t go, no? Luckily, there are several Byzantine churches around town, most of them equally restored, but giving a slightly more original impression. And that is it, for the rest, Nesebar could be anywhere, really, it is not different from your average coastal resort, whether in Spain or Turkey, Tunisia or Thailand. Terraces, ice cream parlours, every street plastered with tourist trinkets, every house an art gallery, a fashion outlet or a jewelry shop. The wooden houses that were so enchanting in Sozopol, are here just a bit too restored, just a bit too modernized, and have lost the feel of authenticity. Bali in the Balkans. 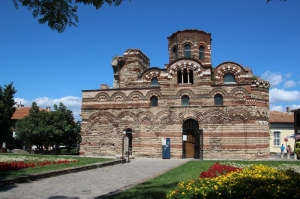 one of the Byzantine churches in Nesebar 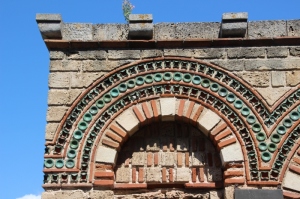 Across the bay is Sunny Beach – that is also how the Bulgarians call it -, apparently the most beautiful stretch of sand along the Bulgarian Riviera. From the distance, we got sufficient feel for how it must look like, all-inclusive resort hotel after all-inclusive resort hotel, the bigger the better. Likewise, we avoided Pomorie, we didn’t even get out of the highway, from where we could see the development underway, high rise apartment buildings and mega-resorts being constructed as we speak. Obviously, the fruits of progress are about to be eaten. 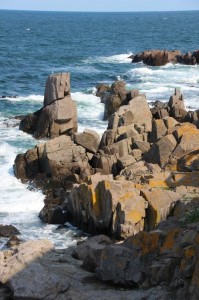 the Black Sea Coast, not everywhere a smooth beach 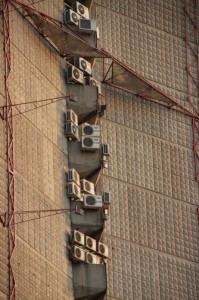 air conditioners on the side of the Hotel Bulgaria in Burgas 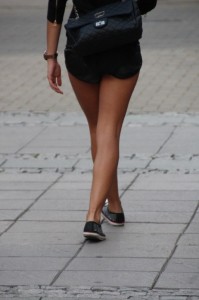 hotpants are in fashion, in Bulgaria 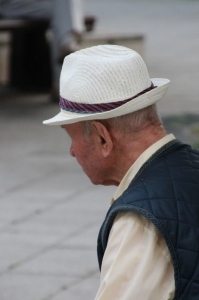 the old men are watching it, all the changes

Burgas is the larger town in the area, with a reasonable public beach, and an extensive pedestrian zone lined with decent shops – no tourist rubbish – and cafes and restaurants. Pleasant enough to spend an evening, and observe the local and foreign population, complete with current fashion: Bulgarians with the shortest possible hotpants, Russians with even less cloths on, the highlight being a woman with a strapless dress that was hanging from her nipples, or so it seemed. Still, expensive cloths, expensive shops, expensive latte-macchiatos. Obviously, lots of money available, lots of money being spent.

One cannot help but think back at that border area, a little further south, a little further inland, no more than an hour’s drive, or so -, and how little has changed there in the past 25 years. And how big the contrasts are, not only with Turkey, but equally so with the fast-paced Bulgarian Riviera.

Next: away from the coast, to Veliko Tarnovo