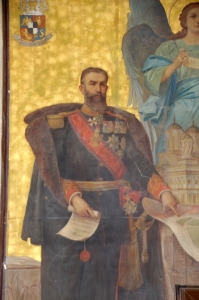 Curtea de Arges, in Wallachia, is steeped in Romanian history, and not only because it is the burial place of King Carol I

Maybe we need a bit of history first. I know, boring, but Romania is in a way unusual – unusual, because of its undeniably Latin-like population with a Latin-like language in the middle of heavily Slav-dominated Eastern European entities. It all starts with the Roman invasion of what was then Dacia, around 100 years AD, which – or so claim many of the Romanians – left behind Roman blood, or genes rather; meaning sophistication, which almost 2000 years later is still evident. Quite unlikely, of course, as has been pointed out by several non-Romanian historians, because, firstly, Roman legions in those days were manned by Barbarians from all over the Roman Empire, with only a small contingent of officers being of Roman origin, and secondly, the Romans withdrew again barely 150 years later, which leaves a rather short period of domination to establish such an impact on a local population. After all, the Romans have been in England for much longer than just 150 years, yet, everybody will readily agree that there is very little Latin left in English culture.

In any event, the Romans left because of the threat of the Barbarians, very real indeed, as the area of present-day Romania has subsequently been invaded by many others, about every possible civilization – if it may have had this name – imaginable. Of course, as Robert Kaplan, a journalist, remarks, its geographical location is less than enviable. Its main provinces, Moldavia and Wallachia, are east and south-east of the Carpathians, leaving the door open for Russian and Turkish invaders, and Transylvania, on the other side of those same mountains, is an easy grab for Hungary. The Huns, the Slavs, the Visigoths, even the Mongols, they have all been to Romania. Perhaps culturally most influential was the 9th Century Bulgarian occupation, which introduced Orthodox Christianity in the place of the Roman Catholic church – perhaps removing its last tangible link to its Roman roots. Yet, there are undeniably Latin characteristics left in Romanian society. 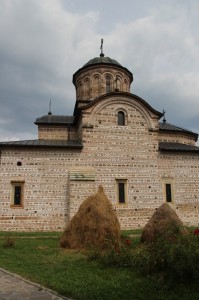 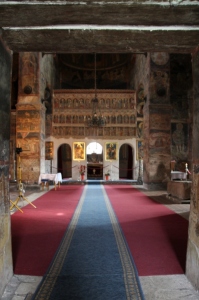 inside the Saint Nicholas church 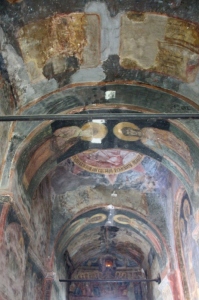 frescoes inside the church 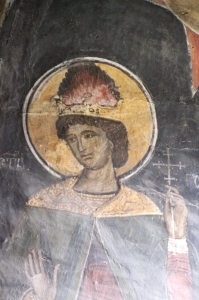 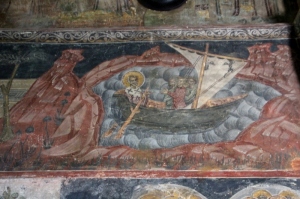 Except for short-lived unifications of variable extend of the principalities of Moldavia and Wallachia under strong individuals in the Middle Ages, like Stefan the Great, Vlad the Impaler, and Michael the Brave – unifications that often collapsed again after the death of such individual -, the country Romania only came into existence in 1861, or 1859 – different sources quote different dates. (And Transylvania was only added in 1918, after some 1000 years of Hungarian domination.) But the first administration, run by a colonel, wasn’t much of an improvement over previous rulers, whether Turkish or Hungarian, and in 1866 the Romanians decided they needed a Monarchy, the idea being that a foreigner would, presumably, exploit the country less than any local powerbroker would. So they asked a Prussian Prince whether he wanted to become their king. I wonder how you do that: first select, then approach someone from Royal descent, and pop the question: do you want to become our King? Karl von Hohenzollern must have been equally surprised, but he said yes, and from then on went through life as King Carol I of Romania. Apparently, he approached his new dominion low key, and traveled by second class railway coach to Bucharest. Having arrived, and being shown his new home, he asked, in disbelief: ‘but the palace, where is the palace?’ (or something like that). Yet, he took his role seriously, and can be credited with creating a viable state. And some viable alternatives to his initially humble housing. 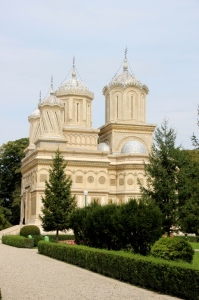 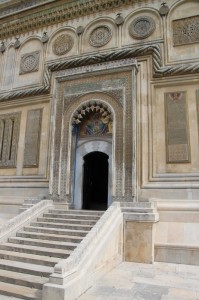 marble doorway of the cathedral 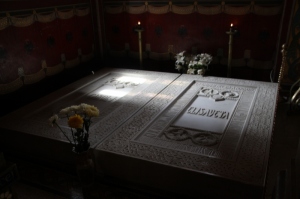 the tombs of Carol I and his with Elizabeth

All this introduction, because Curtea de Arges, two hours to the NW of Bucharest, is steeped in Romanian history. It has a beautiful, small church, once more dedicated to Saint Nicholas, which is said to date from the beginning of the 14th century, and was established by Besarab the First. Besarab was an early voivode, a prince, who founded Wallachia – named after the inhabitants of the area, the Vlachs. And Wallachia today is one the three main principalities that make up Romania, the other two being Moldavia and Transylvania. Anyhow, the church is definitely another highlight, once again frescoes all over, walls and ceiling, well kept, well maintained. The complex in which the church is located, the so-called Princely Court, shows that the Romanians may have kept the language from the Romans, but certainly not their building skills: like the Princely Court in Bucharest, there is very little left here, just a pile of rubble.

The second church, in fact the Curtea de Arges Cathedral, shows that Ceaucescu was not the first Romanian to construct totally misplaced buildings. Although there was an earlier edifice, apparently also heavy on marble, built by another voivode, also called Besarab (16th Century Neagoe Basarab, distant relation, I think), the present-day building is not a church, this is a mausoleum, a hugely pompous, all-marble structure dating from 1875. It was built on the orders of King Carol I  – and Carol I and his wife are duly buried here. And so is his successor, nephew Ferdinand I and his British-born wife Queen Marie. And guess what the frescoes are all about, in the church. As I said: a mausoleum.

a more recent fresco, it seems 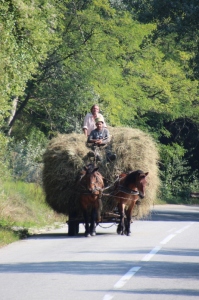 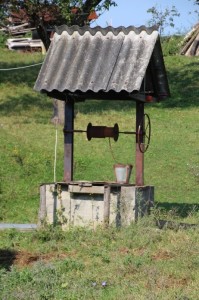 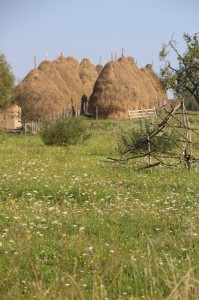 hay stacks, a common sight this time of the year

Far more interesting is Curtea de Arges, a pleasant small town along the river Arges, and the surrounding countryside. This is – I suppose – vintage Wallachia. Small villages, with a wide variety of peasant houses, but not necessarily all small and poor: there are quite a few new houses, or newly painted, well maintained houses. And yet, the area has this air of poverty, somehow, or perhaps it is just the air of 50 years ago. Roads off the main highway, a two-lane affair through the village, quickly turn into unsurfaced tracks. People are simply dressed, women in rather shapeless clothes, the older ones often in black, often with head scarves. In fact, most people are older: the young have almost all left for the cities. A lot of transport is by horse-drawn cart, and if there is a tractor in use, it looks old. It reminds me of Albania, 20 years ago – like the Bulgarian countryside also reminded me of Albania. Except that every 500 meters, or so, somebody had opened a bright-new Pensiune, varying from a simple bed & breakfast place to elaborate multi-story guesthouses complete with restaurants, ice cream parlours and coffee shops. Obviously, a new development, and judging from the excellent Italian some of the owners speak, developed with  money earned abroad, and brought back to invest. It remains to be seen whether there is sufficient market for all that investment.

Next: finally a taste of Dracula, in the Carpathian castles 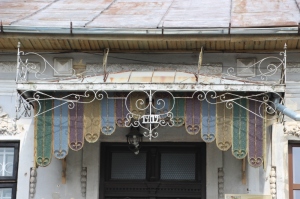 porch of a house in Curte de Arges 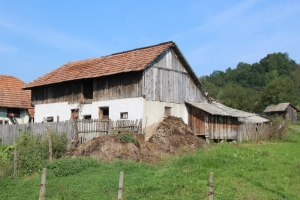 house in the Wallachia countryside 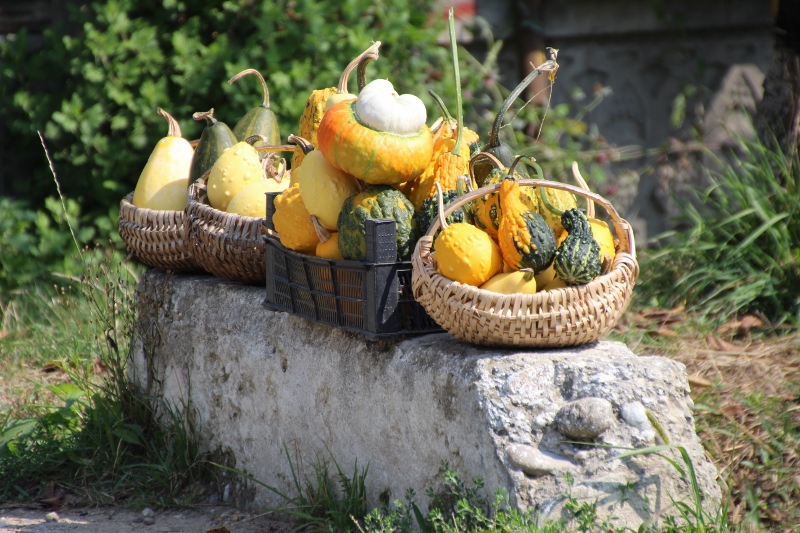 pumpkins for sale along the road