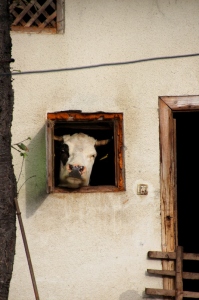 inside a Maramures yard

Perhaps one of the most beautiful regions of Romania, Maramures has lots of attractions, from churches and cemeteries to wooden villages

To get from Bucovina to Maramures takes about half a day. The first few hours, all the way to the Mestacanis Pass, we drive along the main road, the usual two-to-four lane affair. Theoretically to make great progress, but the reality is, as usual, quite different. Main roads go right through villages, where maximum speed is 50 km/hour, and quite reasonably so, given the chicken and the children who randomly run onto the road. Outside the villages, progress is hampered by railway crossings, which do require serious slowing down, by horse drawn carts – ever better visible because of fluorescent reflecting vests, either on the man, or hung onto the back of the cart – and by a whole string of other more or less unexpected dangers and annoyances (there are bicycles, there are huge trucks that worm their way up the winding road to the pass, there is cattle on the motorway, and worst of all, there are other cars). Driving gets rather tiring. 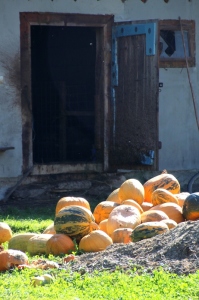 squash in front of the barn 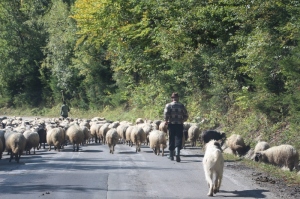 Just past the pass, we turn off onto a much smaller road. No more traffic. Very few villages. Certainly no more railway crossings. But progress is even slower now, thanks to the huge potholes in the road. You never win, on the road in Romania.

But soon we find something else to marvel. Totally unprepared, we arrive in Ciocanesti village, where houses have been decorated with geometrical and floral patterns. The story goes that long ago a peasant woman who got married wanted to redecorate her house. She found a local artist, who carved patterns in the soft plaster of the house, which the woman subsequently painted. The story doesn’t say how this became a tradition, but fact is that all the houses now have been painted in this way, as decreed by local law. 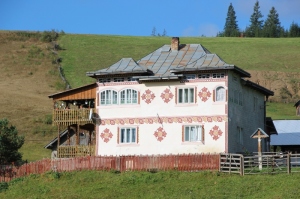 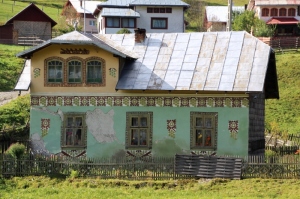 not all the houses are well-maintained 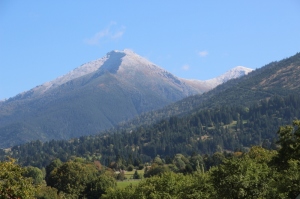 view over the Rodna Mountains 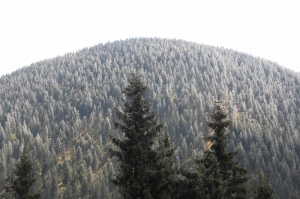 at 1500 m or os the tops of the trees are white, even though it is only end September 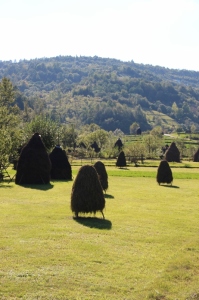 hay stacks, perhaps one of the most characteristic views in Maramures 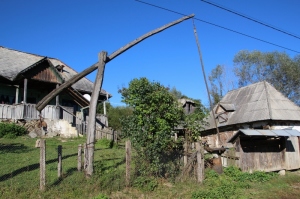 along the road, plenty people still get their water from simple wells

After yet another pass, the Prisslop Pass at just over 1400 meters – where we decide to leave the menacingly-named Complex Turistic the Complex Turistic, without checking it out -, we finally enter Maramures proper. Another one of these regions that have had various different rulers, having been annexed by the Transylvanian principality is the 16th Century, and the Austrian Empire afterwards, occasionally disturbed by Tartar invasions in the 18th Century, until most of it joined Romania in 1918, together with Transylvania (‘most of it’, because the northern-most part, like part of Bucovina, went to Ukraine). 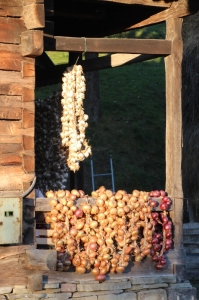 onions and garlic drying in the sune 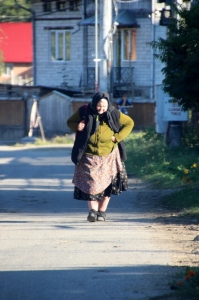 Maramures’ fame comes from its wooden churches, according to most historical sources built to celebrate the final retreat of the Tartars after 1717 – how they knew it was final, at the time, beats me, but never mind. In fact, a few of the churches are thought to date back to the 17th Century, and in any case I would think that, being made of wood, it is likely that a certain amount of restoration and rebuilding has been undertaken. Whatever the case, these are outstanding churches, beautifully constructed from wood only, with steep spires reaching for the sky – in the belief, apparently, that the taller the spires, the easier it was to get your prayers where you wanted them. More about these churches later. 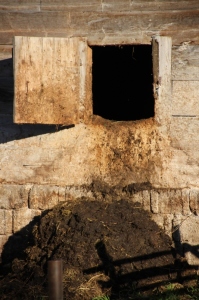 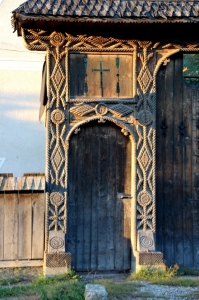 the smaller of two doors, in the gate 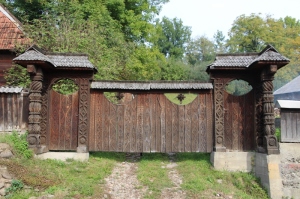 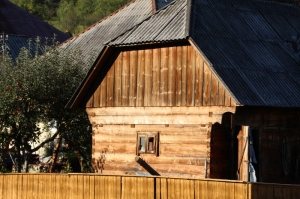 many houses and barns are made of wood

Wood comes back in people’s houses, too, where doors and windows have been decorated, and especially in the wooden gates. These are exquisitely carved structures, not even that old – I noted gates from 1985, numbers carved, and 1989 -, but very impressive. Many have two doors, a large one for the cart, and a smaller one, for people, and often there is a bench, too. Where in the old days the gates were an integral part of the wooden complex, they now have become more and more a status symbol, part of a concrete wall which surrounds a modern house, but nevertheless, this allows the tradition to continue. 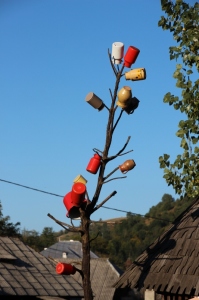 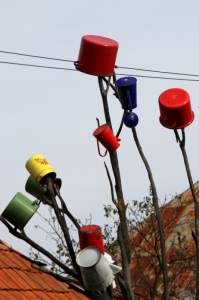 another pot tree, only the top

Another tradition is the pot tree. A tree in the garden has been decorated with colourful pots and pans, according to one source to indicate that there is a girl available for marriage in the house – whether the girl likes to be advertised this way, the story doesn’t say, neither if a bigger tree with more pots  generates more interest. But colourful it is.

Next: the wooden churches for which Maramures is rightfully famous 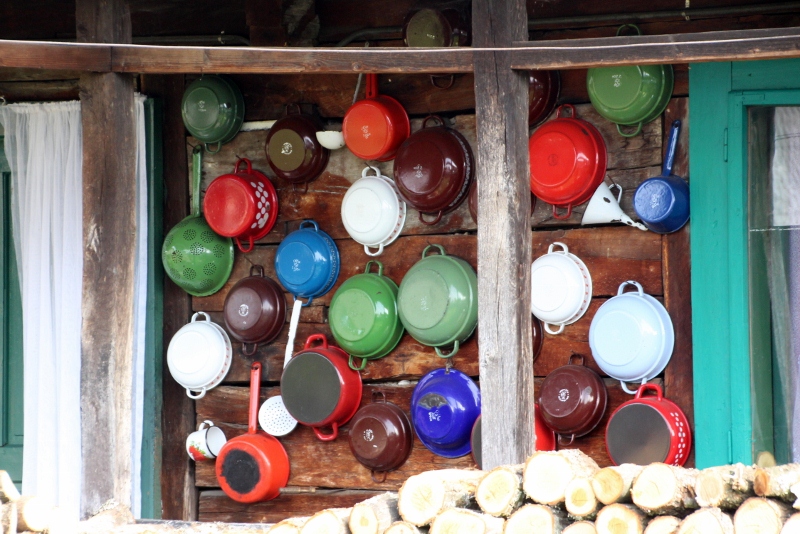 some people have no tree, perhaps?