35. the wooden churches of Maramures 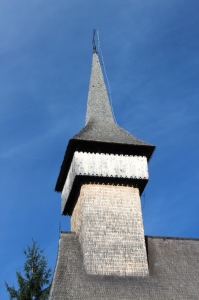 Another unique Romanian feature are the steep, wooden churches of Maramures, beautifully decorated inside with frescoes

There are around a hundred wooden churches in Maramures, of which eight are on the UNESCO World Heritage List. We didn’t visit all of them, not only because there is a limit to how many wooden churches one can visit, but also because visiting the churches isn’t as easy as it sounds. For starters, they are closed. Some have a piece of paper with a telephone number, to reach the caretaker, who may, or may not decide to turn up after a call. Others have no indication of where to obtain the key, whatsoever; but asking around often generates enough clues as to on which door to knock, or to which door to call if the yard is being protected by a mean-looking and frantically barking dog. And in most cases, somebody turns up eventually; and waiting is often worthwhile, the reward being a look inside the churches. 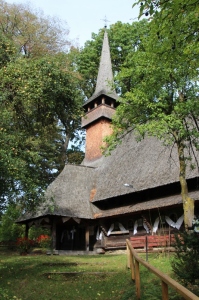 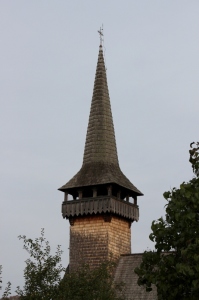 the spire of the Sat Sugatag church 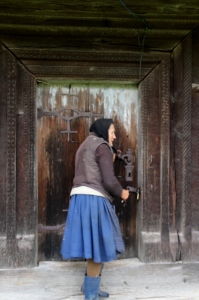 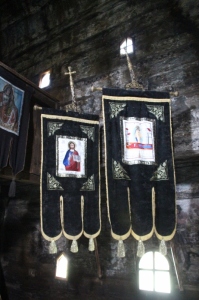 inside the Sat Sugatag church, few frescoes, but many standrads, still in use for processions 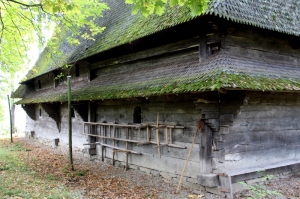 the wooden construction in Harnicesti

Many of the churches have been brilliantly decorated, as befits orthodox churches. Although along the benches some of the frescoes have been eroded, by people sitting against them, the Biblical scenes on the walls and the ceilings – no different subject-matter than in Bucovina, of course – are often very well executed, in a naïve style, and still quite bright. 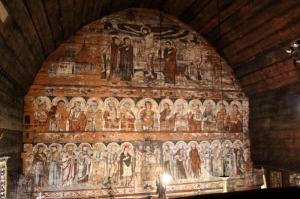 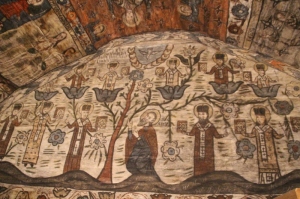 another fresco, high up in the Desesti church

one of my favourites, part of the hell scene in the Poienile Izei church 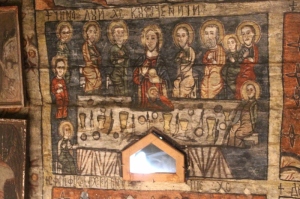 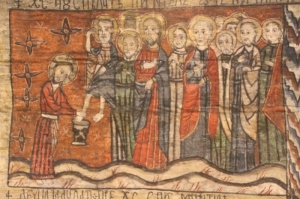 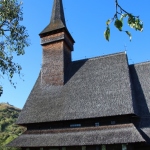 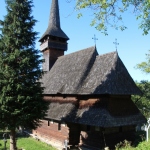 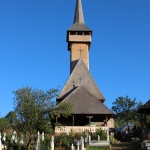 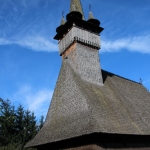 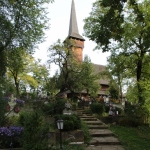 The churches we entered were those  in Ieud, Poienile Izei, Desesti and Budesti, as well as the less expressive, but perhaps more authentic church of Botiza (by following the links you’ll find some additional photos). a simple metal cross outside the Desesti church 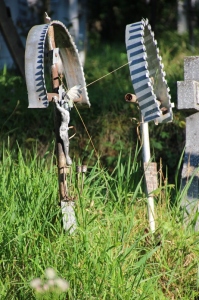 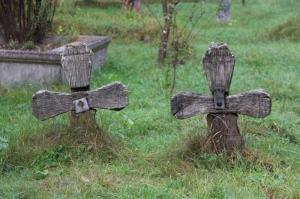 The churches come with cemeteries, as most churches do. Remarkable is the variety of material used for the crosses, perhaps also a reflection of economic hardship. There are simple wooden crosses, elaborately carved wooden crosses, a few stone crosses, but mostly, people have opted for metal crosses, sometimes decorated with a small sculpture, or a semi-arc, at other times no more than a simple metal cross. 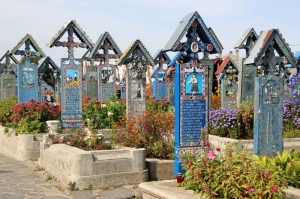 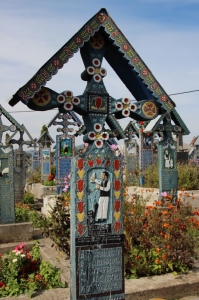 cross of a drinker, the Romanian text refers to tuica 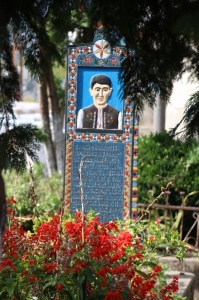 another, fairly new grave, under the tree and behind the flowers 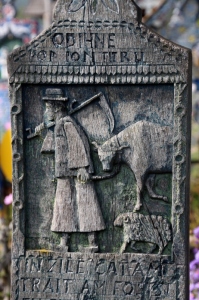 an older one, a man with his animals 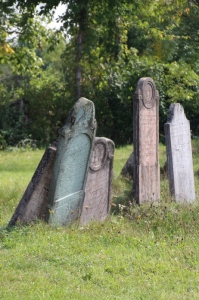 some of the Jewish tombstones

That it doesn’t need to be this way, is demonstrated  in the village of Sapanta, close to the Ukrainian border. Few cemeteries will be more colourful than the Cimitirul Vesel here, which translate into Merry Cemetery. Villagers have created a tradition of mildly mocking the deceased, through poems or images added to the crosses, which themselves are bright blue. The poems are in Romanian, of course, but the images are quite expressive: a house wife, a soldier, a farmer, a musician. A car accident, showing how somebody got to his end. It is the first cemetery where I had to pay an entrance fee, including extra for my camera, it is also the first cemetery where I saw lines of tourist stalls outside, selling socks and pots and tablecloths. Obviously, this is more than a cemetery alone, it is a major tourist attraction. Which cannot be said of the Jewish cemetery, a few hundred meters back. It is fenced, and the gate is closed, I suppose to avoid desecration. The cemetery is in memory to the thousand Jews deported in the war, and a stark reminder of the anti-Semitism that dominated this part of Romania. Not every cemetery is merry. 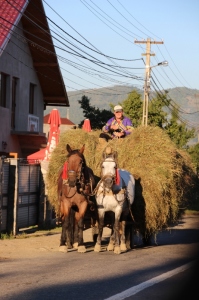 a Dutch-speaking Romanian on top of his hay cart 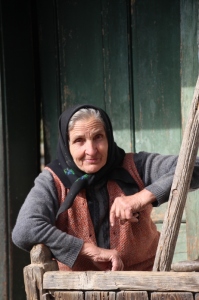 It is our last day in Romania, tomorrow we start the long drive home, to The Netherlands. As I get out of the car, to take some pictures of the hay stacks that form another characteristic of this country, a horse-drawn cart appears, also full of hay. The guy on top asks me, in good Dutch, if I am from The Netherlands. It turns out that he has been working there for a couple of years, and now he is back. On top of the hay, on top of his cart. Showing quite a bit of flexibility. Isn’t it great, this free traffic of people among European countries?

Next: the last entry, looking back, a reflection on Romania 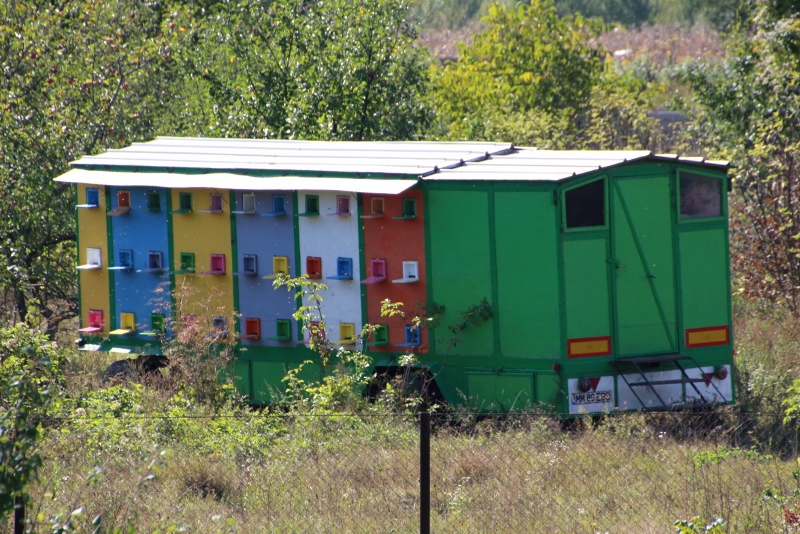 these are bee hives, a real honey machine 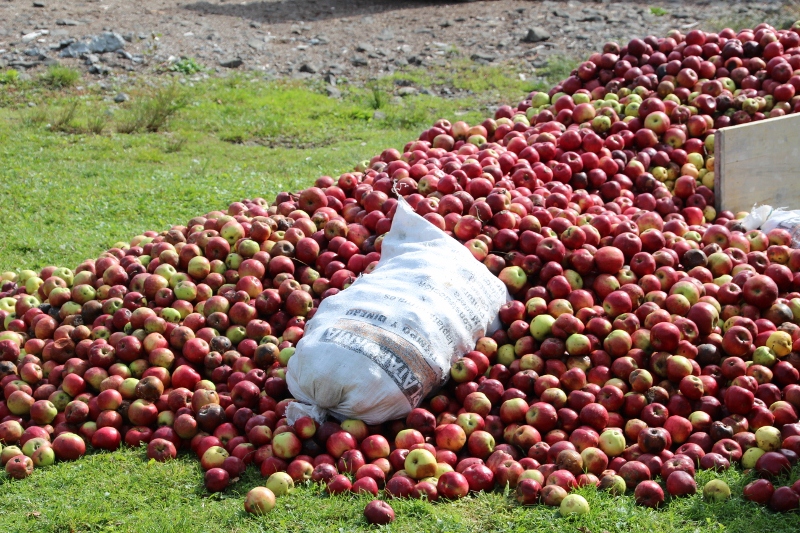 apples galore, at this time of the year