18. the Carpathian castles 20. the Bucegi Mountains 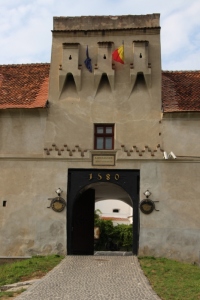 the entrance to the Brasov Citadel

Old Brasov is a nice, German-style town, with an attractive center showing of a relative affluence, perhaps characteristic for Transylvania

Crossing the Carpathians, from Poienari Fortress to Bran Castle, we also move from Wallachia into Transylvania, and it shows. Immediately upon entering the county of Brasov, the roads improve. The villages are still rural villages, but they look better maintained, more affluent, houses better looked after. There are still horse-drawn carts, and still women wearing black, and shapeless dresses, but somehow it all moved a little more upmarket, it seems. Or perhaps it is just slightly better organized.

In the Middle Ages Transylvania was relatively underpopulated, and the Hungarian rulers at the time encouraged German settlers to move there, and set up their business. Which they did, by establishing several towns – in the popular opinion seven, which is why Transylvania became known, in German, as Siebenburgen; although in reality, they founded nine towns. They also populated over 200 villages, but more about that later. The Saxons never made up even anything close to a majority, in relation to the many Romanian-speaking peasants, mostly working as serfs for the ruling Hungarian nobility, and by other settlers, a Hungarian tribe called Szekelies. I think most historians would agree that the Romanians made up the majority population, but it took until 1918 for Transylvania to formally become part of Romania  – Romania won, Hungary lost, in WW I. The area changed sides a few more times, which triggered forced migrations backwards and forth of Romanians and Hungarians. Except that the German – Saxon – population suffered badly after WW II, and probably halved in size, thanks to Russian deportations. And then almost entirely disappeared after the fall of the Communist regime, in 1989 – with a one-way ticket to Germany proper. 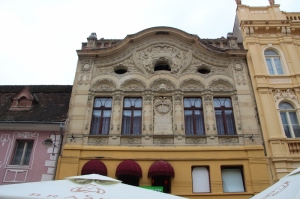 one of the turn-of-the-century houses in old Brasov 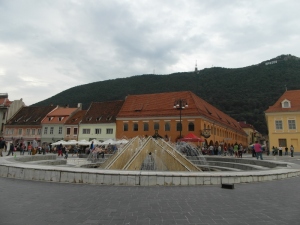 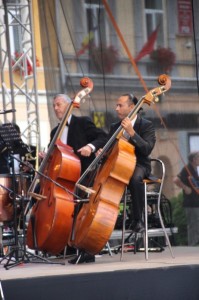 members of the Brasov Philarmonica 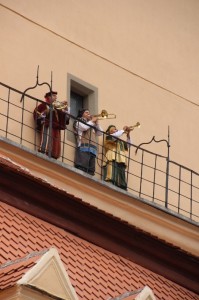 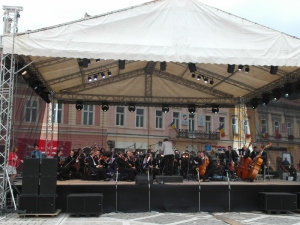 the Brasov Philharmonic, during afternoon practice 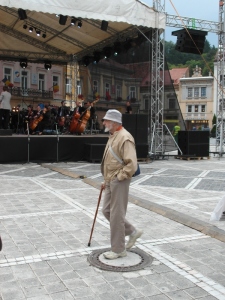 Brasov, in German called Kronstadt, is the second-biggest of the original Saxon cities, and contrary to common belief, not one of the seven cities, but the last one, the ninth to be established, now with a quarter of a million people or so. But once inside, you hardly notice it. The old town centre, mostly pedestrian promenades, is your usual cobbled streets, lined with terraces and cafes, and rows of attractive, well restored turn-of-the-century houses (turn from 19th to 20th Century), culminating in a large square. For the occasion, the square was enriched with a platform, on which the Brasov Philharmonic played a potpourri of waltzes, followed by the accompaniment to Brasov’s finest, a whole series of what looked like aspiring opera singers, a sort of classical music Karaoke. Which provided a great atmosphere, entertaining music, and many onlookers – or onlisteners. The funnier part was a few hours earlier, when they were rehearsing, whilst the fountain was still happily splashing water around, a truck was noisily pumping I don’t know what, and at exactly six o’clock, the City’s Trumpeters appeared on the Municipal Tower opposite, and Brasov Philharmonic or not, gave their daily trumpet salute, as they have done since the Middle Ages. 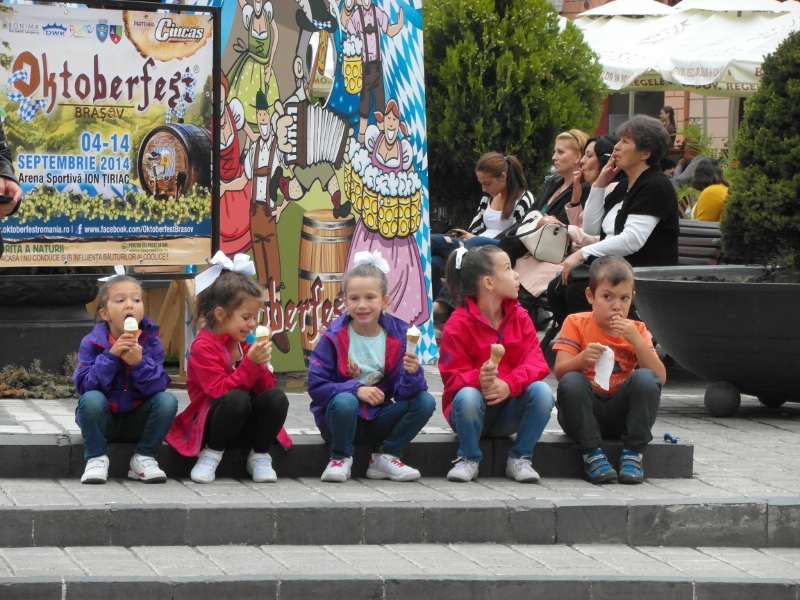 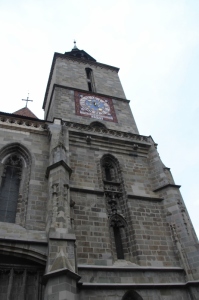 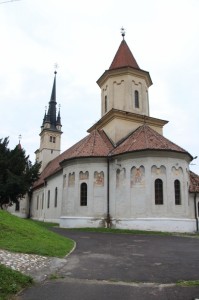 the Saint Nocolas church, with a clearly more orthodox origin 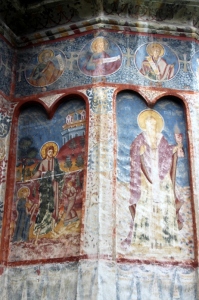 including remains of frescoes on the outer walls

The main church, the so-called Black Church, is huge. Of course, we have crossed the old schism, so to speak, between Roman and Orthodox Christianity, and have now arrived in former Roman Catholic, then Reformed country (leave that to the Saxons!), where churches are big, as opposed to the far humbler – in size – yet far more expressive – in interior decoration – churches of the Orthodox Church. After three weeks of Orthodox, the Reformed church looks rather pale in comparison. 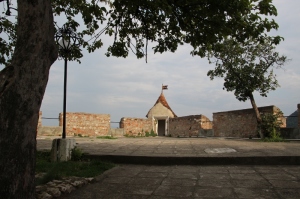 the citadel, high above the town

The town citadel, on a hill away from the centre, is less impressive, mostly being used as restaurant and café, but does provide a nice view over town, also town beyond the old, apparently well-to-do part. There are traces of the old wall, and its defense towers, left, and further afield the true nature of modern Brasov shows, derelict industries and row after row of palatis, some of them patched up and painted in jolly colours, others as depressive as they come. 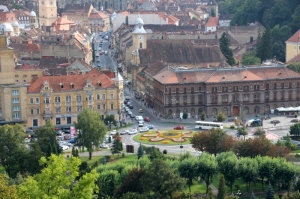 view from the citadel – old town 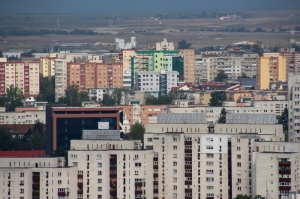 view from the citadel – new town

One gets the impression that life in Transylvania is a little more affluent than in Wallachia. Or perhaps it is just more organized. For starters, the old part of Brasov looks more Mittel-Europa than we have seen for quite a while, since we left, in fact. I wonder if this observation holds, in the next few weeks; after all, the outskirts of Brasov seem little different from what we have seen so far in Romania and also Bulgaria, remnant of a stagnant communist regime.

Next: the Bucegi Mountains