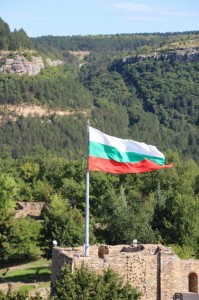 the Bulgarian flag in Veliko Tarnovo

Despite appearances to the contrary, Bulgaria is actually a very friendly country, with lots of attractions

I said ‘time to move on’, at the end of my previous entry, but perhaps that is a little unfair on Bulgaria. From rather low levels of expectation, we have actually been pleasantly surprised by our Bulgaria experience – even though we spent only some ten days here, not nearly enough to claim an understanding of the culture, of the people and of anything else Bulgarian.

Bulgarian history is one of these things we average Western Europeans have no idea of. After Bulgur tribes invaded the area, they quickly moved to become the dominant power in the Southeast European region – the First Bulgarian Empire was established in the 7th Century. Struggles with an admittedly formidable enemy, the Byzantines, let to decline, but as soon as Byzantium itself started to weaken, the Bulgarians were at it again, establishing the Second Bulgarian Empire (12th Century), once again dominating the area between the Adriatic and the Black Sea. Only to be wiped out by the Ottoman forces, which seems to have ended any further Bulgarian world domination – mind you, not its aspirations: they duly organized a revolution against the Ottomans, but needed the Russians to be successful. Subsequent attempts to form a Third Bulgarian Empire came to nothing, Bulgaria ultimately losing out, and losing territory, in the Balkan Wars, and then choosing the wrong side in both World Wars. With communists winning the post-war election – after Russians had invaded -, Bulgaria turned Soviet-style communist, a regime that collapsed only in 1989, together with all other Eastern European communist regimes 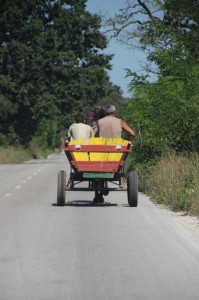 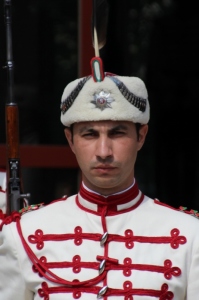 changing of the guard, in Sofia; solemn looking Bulgarian 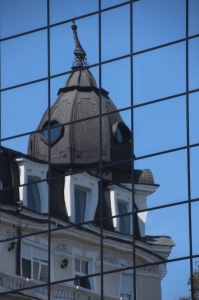 old and new: turn of the century building reflected in modern glass wall in Sofia 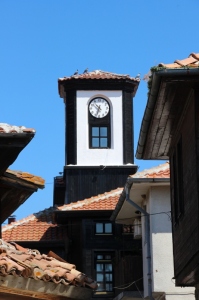 clock tower in Nesebit, on the Black Sea

Our Western European stereotype perception of Bulgarians, the ones who take our jobs and our wallets, we will have to adjust. The average Bulgarian male between 20 and 40 years old has tattoos, a crew cut and no neck; they are rather well-built, if you know what I mean  – and of course you do, you have the same stereotype impression. And if you would meet a type like that in a big city dark ally, you would probably walk away. And yet, in Bulgaria we never felt threatened, despite the presence of many typical 20-40 year old rather well-built males with tattoos and crew cuts. In fact, they proved to be most polite, helpful people when we needed them, showing us the way, translating in shops. It’s just the way things are.

Similarly, I am sure all these newspaper reports on corruption in Bulgaria have more than a grain of truth. But no-one asked us for unaccounted-for direct taxation, no-one – except for one supermarket cashier, on the tourist-heavy Black Sea coast – tried to cheat us, everywhere the price we paid was as published, as agreed, and very reasonable. In most of the tourist attractions, there is no entry fee, or only a very small amount requested – always with ticket – for upkeep of the property. No policemen stopped us and asked us for exorbitant fines for non-existent traffic offenses (they didn’t deal with the very real traffic offenses of quite of few Bulgarian drivers, either, of course). In fact, life as a traveler in Bulgaria is perhaps the most relaxed I have ever experienced, anywhere, as a traveler.

I commented earlier on the rather stern attitude of Bulgarians, not very talkative, not much room for a smile, rather indifferent to the foreigner, and in fact to everybody else around them. Perhaps that is a remnant of life under a communist regime. We have, in our vocabulary, introduced the word ‘Bulgarian face’ to refer to a non-expressive, somber face. And yet, perhaps we are not entirely fair to the Bulgarians, perhaps we haven’t had enough time with them. The younger generation, for sure, is much more open, ready to make a joke, helped by their excellent command of English. And they are also Bulgarians, increasingly so, of course.

Food? Widely available, grilled kebaps, expansive salads, and if you get lost, there is always a pizza. Excellent local beer. Wine? I have no idea where to start, we didn’t realize, but Bulgaria has an enormous selection of wines, from merlot to Bulgarian-only mavrud, in every price range. And not bad, at all. Much too varied to even try to comment on in any more detail, after only ten days.

So after all, we have to conclude that we actually had a great time, here. The sites, from Sofia and the Rila Monastery to Veliko Tavorno and its tiny little hidden Saint Nicolas church, were great, the various towns and villages we visited enormously varied. Architectural remains from thousands of years of history, from Roman to National Revival. And cobbled streets, cobbled streets everywhere. Nature, the Balkan Mountains, perhaps not too impressive, and the Black Sea Coast over-developed, at least to our taste. But overall, no regrets including Bulgaria in our trip. To be recommended, actually, should you want something else than your usual holiday destination.

Next: back to Romania, to Bucharest 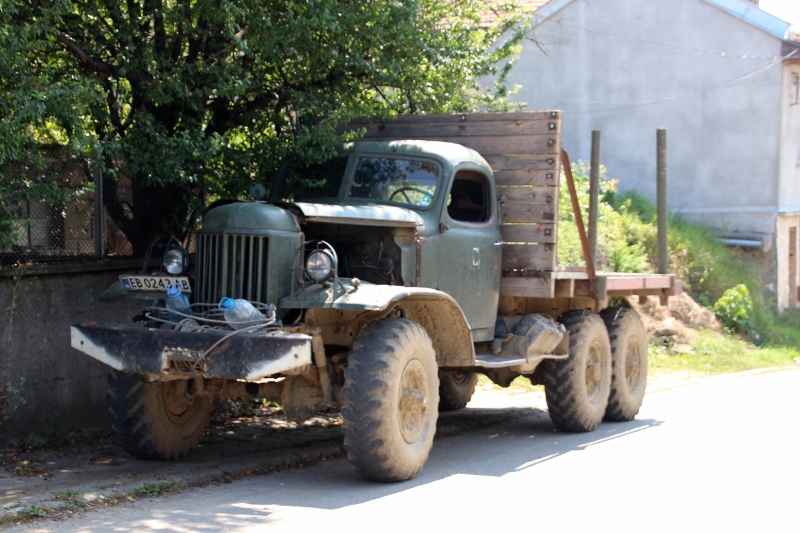 not everything is new, just yet: an old truck in Tryavna

2 Responses to 15. the Bulgaria experience