26. the Prahova Valley 28. an industrial heritage 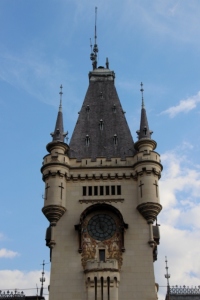 the tower of the Palace of Culture, Iasi’s signature building

One of Romania’s biggest towns and its surroundings, with an insider’s view

Driving from Ploiesti to Iasi, after a few hours we decided to abandon the highway – which in itself is a big term for the two-to-four lane road that connects Bucharest with Romania’s second, or third, or fourth-largest city, depending on whose statistics you believe, and whether you count the student population. On the highway, bicycles are not uncommon, and despite signs forbidding them, horse-drawn carts are also a frequent sight. Most of the road is two-lane, with a fairly narrow hard shoulder, which is used as extra lane, allowing cars to overtake even when there is oncoming traffic, a perfectly normal concept in Romania. Which does nothing for the oncoming car overtaking the truck that stopped on the hard shoulder to buy grapes, or apples, or anything else that is sold along the road. Or for the car that has to turn left or right and moves at snail’s pace on the hard shoulder, or no pace at all on the main lane. In short, reason enough to abandon the highway. 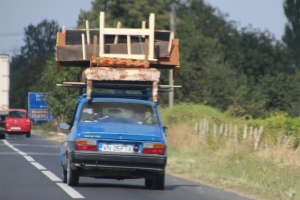 poor quality photo, but still: on the highway, moving house 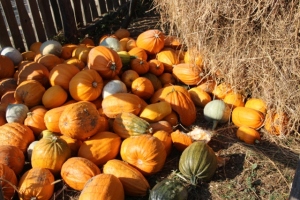 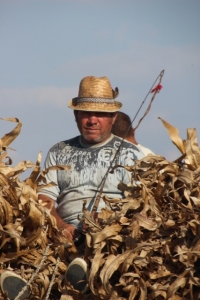 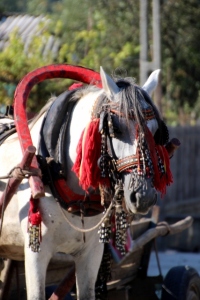 beautifully decorated horse, in front of a simple cart

Which brought us into a much more attractive part of Moldavia, the third main province of Romania. Forests, as well as extensive agricultural land, small villages, some excruciatingly poor, others well-off; again, we observed this stark contrast, within a relatively short distance: in one village we find a man approaching us for a Euro, or for some money for a drink – his own words -, whilst in neighbouring villages the new economy was in full swing, new cars, new houses. Although the horse-drawn cart is present everywhere, rich or otherwise. 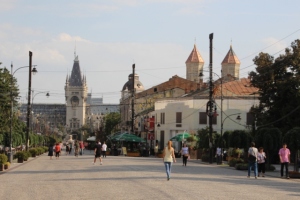 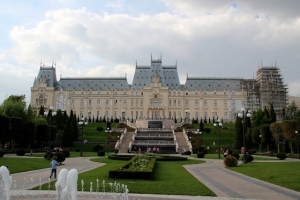 the Palace of Cuture, in its (almost-)full glory 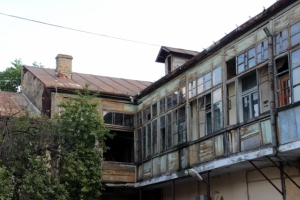 part-wooden houses in a Iasi courtyard 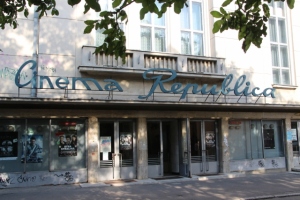 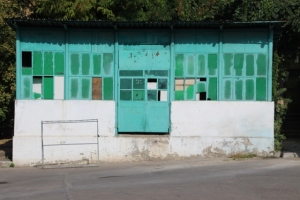 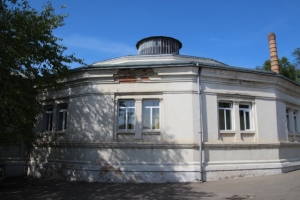 a beautiful round bath house, still in use 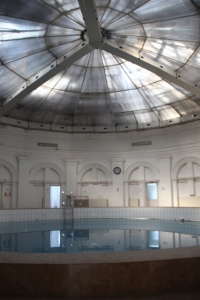 and inside the bath house 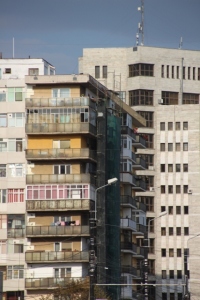 palatis, one of my fascinations, form the dominant housing in Iasi

Iasi itself is a pleasant enough town. The central axis is formed by a pedestrian street, along which the sites are aligned: an orthodox church from the 17th Century, invaded by a group of Italian tourists – the church was a very peaceful place minutes before -, the somewhat unfitting Moldavian Metropolitan Cathedral, and nearby both the old, and the strikingly modern new Catholic Cathedral. The pride of Iasi is no doubt the Palace of Culture, a turn-of-the-century, neo-gothic giant, and the very modern redevelopment behind it, complete with apartment buildings and a shopping mall and an attractive park. But the town also sports several less celebrated, yet equally interesting buildings, like the 1960’s-type cinemas, and a real bath house, still in use. 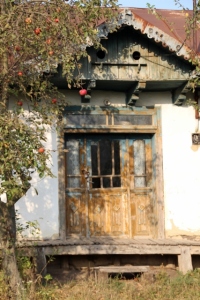 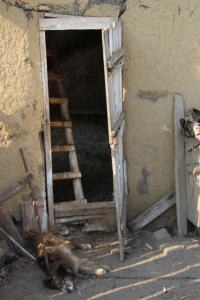 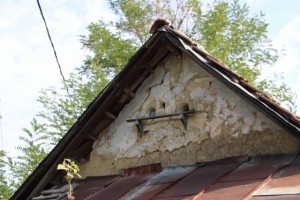 the barn has openings and a resting shelf for pigeons 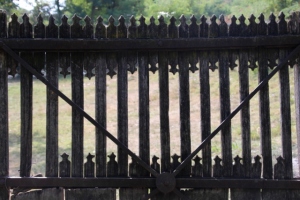 decorated fences are the rule, rather than the exception 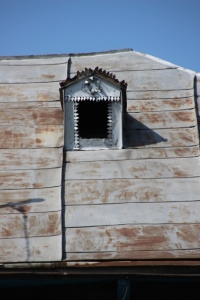 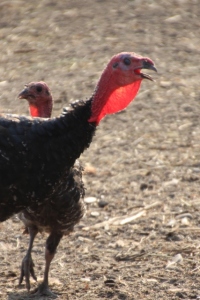 this yard is populated by turkeys, amongst others

Thanks to friends from Iasi we have the opportunity to experience not only the city, in particular its post-revolutionary industrial past, but even more so the villages around, on a much more personal level, visiting grandparents, uncles and aunts in the country side. Many of these villages have fewer ostentatious new houses then we have seen in other areas, like Curte de Arges and also in Transylavania, and seem more authentic – but perhaps this is just another way of saying that progress is slower to penetrate, further away from the main roads, further away from the big towns. The traditional houses we visit are made from earthen bricks – local material – and have a humble, single floor set-up with a verandah connecting several rooms. Others are bigger, with a number of different entrances, but still ground-floor only, no need to expand vertically. Well, perhaps a little higher would have helped, to accommodate a tall Dutchman. Humble or not, houses have been constructed carefully, and people have made the effort to decorate, whether it is the fences or the roofs and the windows. 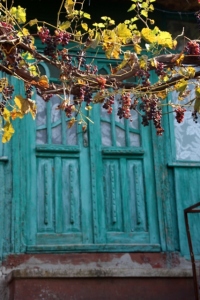 every self-respecting house has grapes 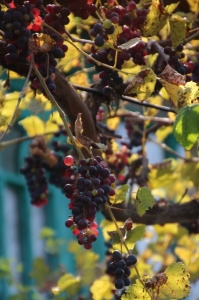 and it is harvesting time! 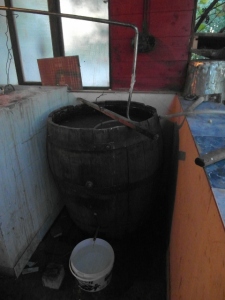 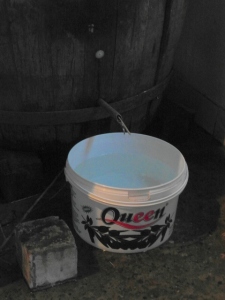 and there it is, liquid gold with a faint plum taste

The yards are usually surrounded by subordinate buildings, barns and storage. They hold a variety of animals – chicken, turkey, geese, chained dogs, and there is room for pigeons -, and the garden is practical, for growing vegetables and fruit. Each and every house also has its grape vines: any self-respecting Moldavian family produces its own wine – with varying levels of success. But not only grapes, all other garden produce is being processed, too. Most villages have no shop, and people are much more self-sufficient that we can even begin to imagine. Peppers and cucumbers are conserved for use later in the year, milk is traded for bread, or a chicken. And plums, well, there are so many of them, the only way to process that satisfactorily is to turn them into alcohol. Tuica, the home-distilled plum brandy, is a big hit, not only in terms of popularity, but also as the result of copious consumption. We were fortunate enough to witness the production process, in something that in first instance looks a rather amateur-like set-up of a distillery column, cooled by a leaking barrel of water. And indeed, we smell the alcohol long before its starts dripping from the end of the column, suggesting that not only the barrel is leaking. Yet, thanks to experience and improvisation, the process is salvaged, so that at the end of the evening several buckets of tiuca can be transferred into plastic bottles. And the stuff tastes remarkably good; after a while, the pure alcohol is even replaced with something vaguely resembling plums!

Next: the factories and palatis, the industrial heritage in Iasi