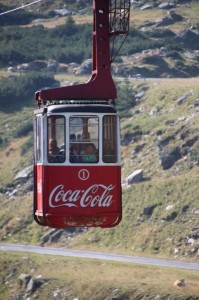 A spectacular road across the Faragas Mountains, with plenty opportunity to get out of the car, too

Romania’s highest mountains – the highest part of the Carpathians – are the Fagaras Mountains, with peaks of over 2500 meters. This is the barrier that separated Transylvania from Wallachia. In due course there have been several roads built across these mountains, but for Ceausescu, Romania’s megalomaniac communist ruler, this was not enough, and he ordered the construction of a road right across the mountains, which became the Trans-Fagarasan Highway. 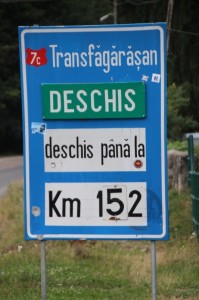 at least they tell you whether the pass is open, at the start of the Transfagarasan Highway

The story goes that Ceausescu, having seen Czechoslovakia been invaded by the Soviet Union, wanted a route to mobilise troops north should Romania await a similar fate. Never mind that there were already other routes, far more accessible for an army, and never mind that the Soviets would have worked out to attack in the winter, when the Transfagarasan Highway, which reaches 2000 meters altitude, is closed because of snow. Or maybe he just wanted to demonstrate what Romania could achieve. Which it did, in 1974, after four years of hard work and quite a few fatalities.

We drove up from the north, hairpin after hairpin, to about 1500 meters, from where a cable car starts its ascent to the top – well, to the top of the road, the highest point of which is 2042 meters, from where a 900 meter tunnels leads to the other side of the mountain. From the cable car, one has the most stunning views of the mountains around, and the peace of mind to quietly look at it, something a lot more difficult when you drive up, and need all your wits to negotiate the bends. At the end, just before the tunnel, is a small glacial lake, and the usual tourist stalls. 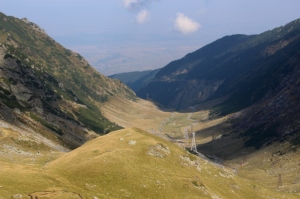 the view north, from the top 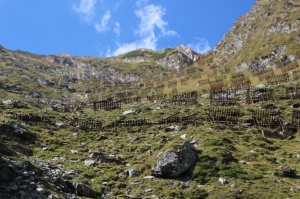 I suppose this is to hold the snow, in winter 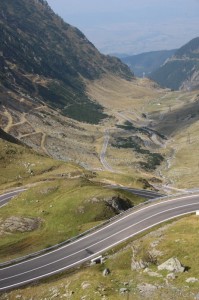 hairpins galore, the northern side 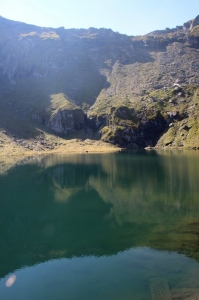 the small lake at the top

The next 2.5 hours were an attack on the knees, walking back to the car. First scrambling down a rather steep slope, along something that was occasionally marked, but didn’t look much of a path, and then, the final 2/3rd of the way, along a well-signposted path, gradually getting back into forest, past what is called the Balea Cascade, and to the parking lot. Great walk, great views. The closer we got to the car, the clearer the path became, now also marked with the rubbish people leave behind.

And then we drove on, back up again – hairpin after hairpin -, to the lake, once more taking in the views, then through the tunnel, and down the other side, which is equally impressive – hairpin after hairpin, and the occasional tunnel. Incidentally, these tunnels are also being used by the sheep herds that roam the flanks of the mountains: sheep have a funny way of blocking the entire road when they cannot go left or right! Luckily, most drivers take this lightly.

Perhaps crossing the Transfagarasan Highway is in itself reason enough to visit Romania?

Next: to oil town Ploiesti, back in Wallachia 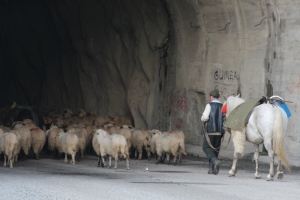 sheep also use the tunnel 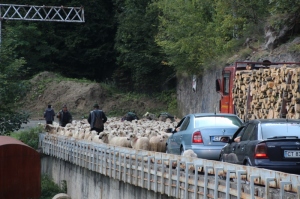 and have a habit of blocking the road