24. the Transfagarasan Highway 26. the Prahova Valley 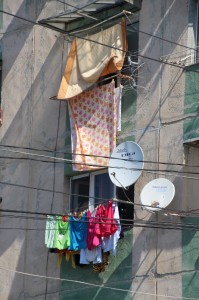 laundry outside palatis in Ploiesti

Oil capital of Romania, Ploiesti has a certain charme for those who appreciate its palatis and modern buildings, as well as its unique oil museum

Ploiesti doesn’t have a tourist information office. It doesn’t need one. There are no tourist attractions. 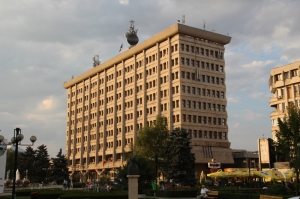 one of those vintage communist era buildings

And yet, no complaints from our side. After all, we abandoned Transylvania because we found it too touristic. And Ploiesti does have its attractions, although perhaps not mainstream. Ploiesti is not only the centre of Romanian oil industry, it is also close to the Prahova Valley wineries. Reason enough, I would say. 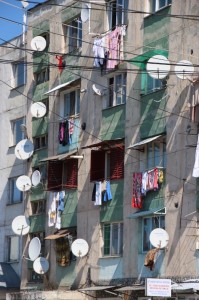 more palatis, with a wild growth of satelite dishes 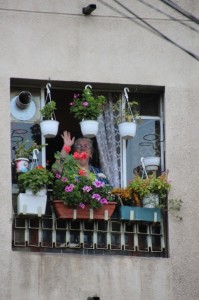 one the inhabitants is perfectly happy, here 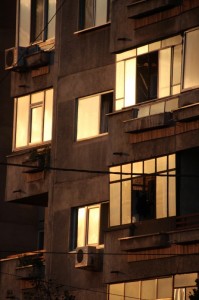 palati windows and balconies in the sunset 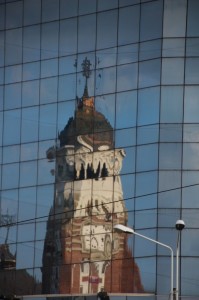 the church, reflected in a modern office building

The town itself is home to the world’s first oil refinery, established in 1856 – which made it a target for Central Powers in WW I, who tried to occupy it, and for Allied air raids in WW II, who tried to destroy it. To no long-term avail: Ploiesti’s oil industry is still going strong, albeit thanks to foreign investments, these days. For the rest, not much from 1856 remains in town. A few buildings are pre-war – pre WW II -, but most of the centre has been reconstructed, so to speak, and now supports the familiar communist era palatis, as well as vintage communist official buildings. Not your average tourist fare, but I find it fascinating. 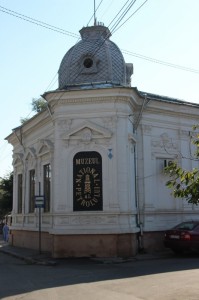 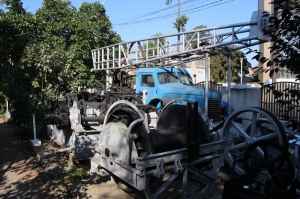 the yard of the oil museum, could be the yard of any oil company, really

Only Ploiesti can house an Oil Museum. In one of the few pre-war buildings, with a garden filled with a host of Christmas trees, blow out preventers and a horse-driven drilling installation, the history of Romania’s oil industry is explained. For the occasion, Gaby the director welcomes the foreign tourists, after which Gaby the guide takes us around, past pictures of the early days, the bombing raids, the major blow outs that burned for no less than three years, the world oil conferences held in Ploiesti – with ancient group photos of oil men, in suits, but on muddy geological field trips not different from what I used to do a lot less long ago. At a certain stage, the tour becomes a little too focused on the Romanian oil heroes, but that is easily forgiven in between the miniatures of rigs, and of maps with oil fields lighting up. What is striking though, is that the history of Romanian oil appears to have stopped with the introduction of communism; no more world records, no more major achievements, no more prestigious medals for Romanian scientists after WW II. 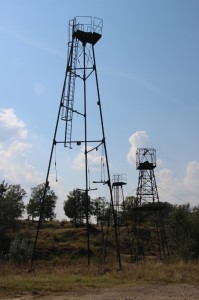 not all the structures in Moreni are modern 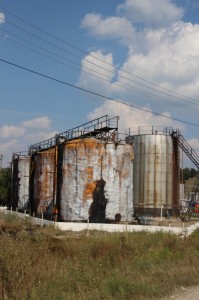 not all the storage tanks, either – but they don’t leak 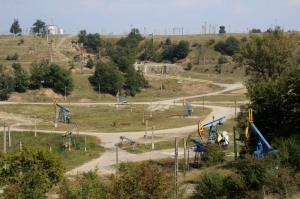 but by and large, the Moreni field looks well-maintained 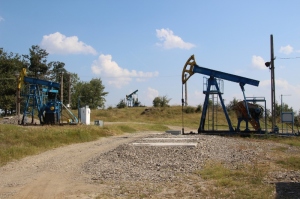 another couple of knodding donkeys 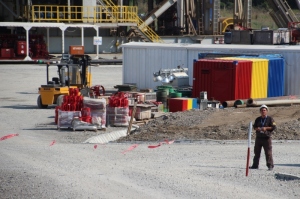 materials in front of a drilling rig, equally well-kept, and even with a bit of colour!

Outside town, we encountered the Moreni Oil Field. Half-expecting an Albania-of-twenty-years-ago experience, with hundreds of derricks polluting the horizon, nodding donkeys at 50 meter intervals, and oil spills in every puddle, every creek, Moreni is actually the opposite. Sure, nodding donkeys everywhere, but that is the nature of the oil, I would think. But every working installation looked well-maintained, fairly freshly painted in blue and yellow, new pipes running between the well heads and the storage facilities nearby, which were also spotless. For old time’s sake there were a few disused installations that were rusting away, where they had been for 50 years or more. Taking photos attracted the attention of some of the site engineers, and a woman in coverall and hard hat came to check. Why we took so many pictures? Because I am interested in oil fields. And did I have a permit from head office? No. OK. And that was the end of it. Things have come a long way, I would think! – 25 years ago I would have been put in jail for spying.

Next: near Ploiesti is the wine region of the Prahova valley 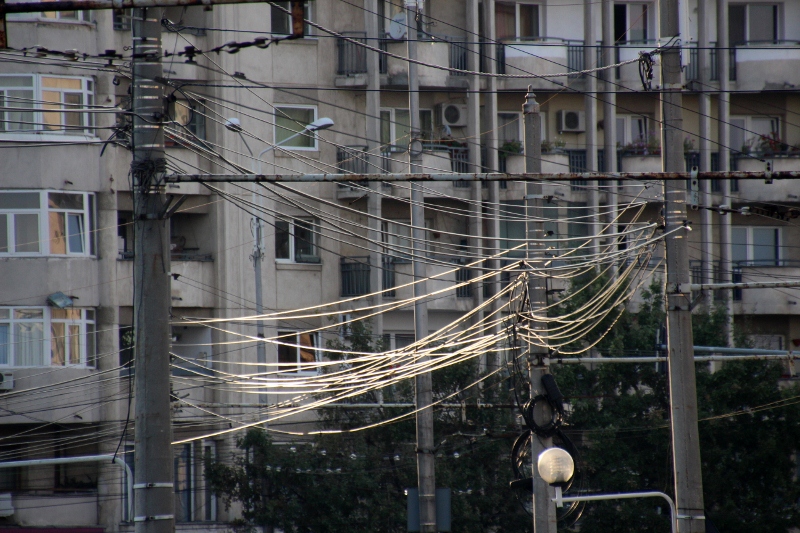 cables in Ploiesti still mostly run outside, in between poles