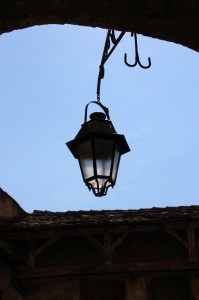 street lamp in Sighisoara, one of the German settlement cities in Transylvania from the 12th Century

A bit more history, featuring the Romanian Royal family and Transylvania, to put things in context (but no claim to be correct, after all, I am no scholar and there other versions…)

Many former colonies of 18th and 19th Century European nations have complained about the random delimitation of their borders, many of which were established at the Conference of Berlin of 1885, and after the collapse of the Ottoman Empire at the end of WW I. And many claim that border adjustments are called for to reunite same-language peoples, re-establish tribal integrity, or some other reason. However, Europe has had its share of shifting borders, too, throughout its history. Germany and Italy, some of Europe’s biggest countries, only came into existence in their current form rather late in history. And I have said it before, if all the national lobbyists in Albania, Macedonia and Bulgaria would be successful in their drive to recreate the Greater Albania, the Greater Macedonia or the Greater Bulgaria, along the maximum borders these lands have had – or are believed to have had – at various moments in the past, the world would be too small. 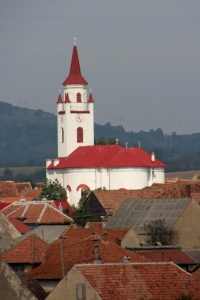 huge church, dominating one of the Saxon villages, rural settlements from the Middle Ages 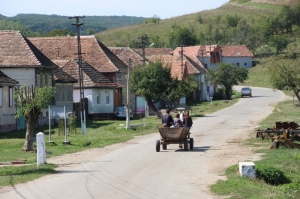 Romania is another example of shifting borders, of which Transylvania is perhaps the thorniest. For most of the world, the Transylvania question revolves around Dracula, the Bram Stoker character who was supposed to come from this haunted, not too far away, but still far enough away, place. For Romanians and Hungarians, it revolves around who – which nation – is the rightful ruler over this ancient principality, with such a mix of people populating it. I mentioned Saxons, Hungarians, Calderaris – a gypsy, or Roma-related group -, lots of people live there, yet, Romanian-speaking peasants have been the majority for most, if not all the time. And that is exactly the issue: were they most of the time the majority, or all the time? When the Hungarian king Geza II decided to mobilise Saxons and Szekely people to populate this area in the 12th Century (and that is quite some time ago…), there may, or may not, have been some, or many, Romanian-speaking subsistence-farming inhabitants already. 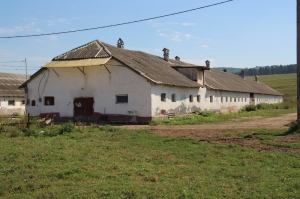 more recent addition, one of the collective farm buildings from the communist era 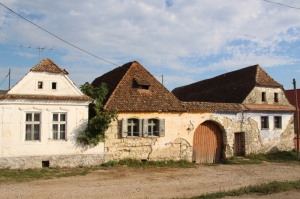 a house in one of the Hungarian Szekely villages in Transylvania 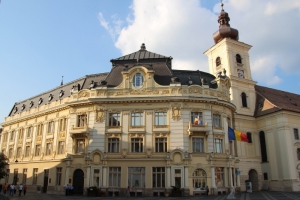 one of the buildings in Sibiu’s old centre, once the Hungarian administrative seat of Transylvania

Fact is that, except for a very short period of unification with Wallachia and Moldavia at the end of the 16th Century – we are talking months, not even years, here – Transylvania has been for as long as there is written record under some form of Hungarian, later Austro-Hungarian rule – except for the time it was an Ottoman vassal state. When Romania was first established as a modern country, in 1859 or so, it was a union of the provinces of Wallachia and Moldavia, and did not include Transylvania.

Enter the Romanian Monarchy. I mentioned earlier how Carol I became King of Romania. I think most critics agree that, by and large, he can be credited with doing a good job building a nation. One of his most important decisions, critical to the current extent of Romania as a country, was that he refused to join the First World War on the side of his cousin, the German Emperor, which brought Romania ultimately in the allied camp – for which it was handsomely rewarded after the war: it got Transylvania, on account of a majority Romanian-speaking people. 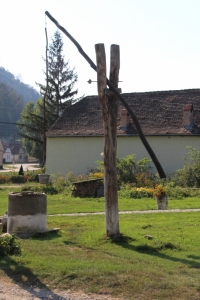 water well in a Transylvanian village

Carol I didn’t experience that anymore, because he died in 1914. Not having children of his own, he had selected his nephew, Prince Ferdinand, as his successor. The best thing Ferdinand did was marrying a granddaughter of Queen Victoria, Princess Marie, a strong and beautiful woman who became the driving force of the Romanian monarchy at the time. Unfortunately, Ferdinand and Marie produced a heir, Carol II, who proved a most useless character, and incurable womanizer, who managed to abdicate no less than three times, and rob the state of its gold and art treasures in the process. You may remember that the reason the Romanians had gone for a foreign king was the hope that a foreigner would rule better, exploit less, than one of their own. Thus was stipulated that the Romanian monarch was not allowed to marry a Romanian. Carol II, of course, had other ideas, and when he as crown prince eloped with a local beauty, he was forced to abdicate; only to return two years later, marry a Greek princess to secure his Royal future, and abandon her again, for another local beauty, Elena Lupescu, requiring a second abdication. In 1930, when his father died, he returned once more to Romania, promised to leave Elana behind, became king, and then broke his promise.

Carol II was exactly what the Romanians who, 55 years earlier, had chosen a monarch, had hoped to avoid. He used the state as his personal fief, sucked as much money out of the country as he could, and in 1938 abolished political parties when they became a hindrance to his enrichment scheme. Instead, he counted on the support of the Legion of the Archangel Michael, an openly fascist organization and hooligan gang, but when this Legion turned against him, he had the leaders killed. In the meantime he tried, but failed to manipulate the international scene: Stalin wanted, and took, Bessarabia, the eastern part of Moldavia, and Hitler forced him to give up Transylvania. Having had to secede all this territory, he lost all national support from a people who had no problems with the anti-semitic credentials of the Legion, but were infuriated by the loss of land. Which is when Carol II had to abdicate for the third time. It didn’t help, of course, that his Elena was Jewish. 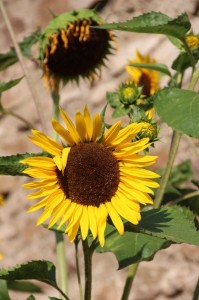 After Carol’s departure, the Legionnaires went on an uncontrolled killing spray, a pogrom which in terms of cruelty could have taught the Nazi’s a lesson, but in the end they had to give way to a military junta backed by Hitler, which, this time around, brought Romania firmly into the German camp at the eve of the Second World War – not least to attempt to regain Bessarabia from the Soviets. But then Romania switched sides in the course of the war – cynics would say, as soon as they realized that Germany was going to lose – and was thus ultimately one of the victors of the war: and Transylvania was once more returned to Romanian control in 1945, and is now integral part of the Romanian state (although not without its tensions, of course). With a clear majority Romanian speakers.

Carol I would have turned not once, but a few times, in his grave.

Next: crossing the Carpathians via the Transfagarasan Highway 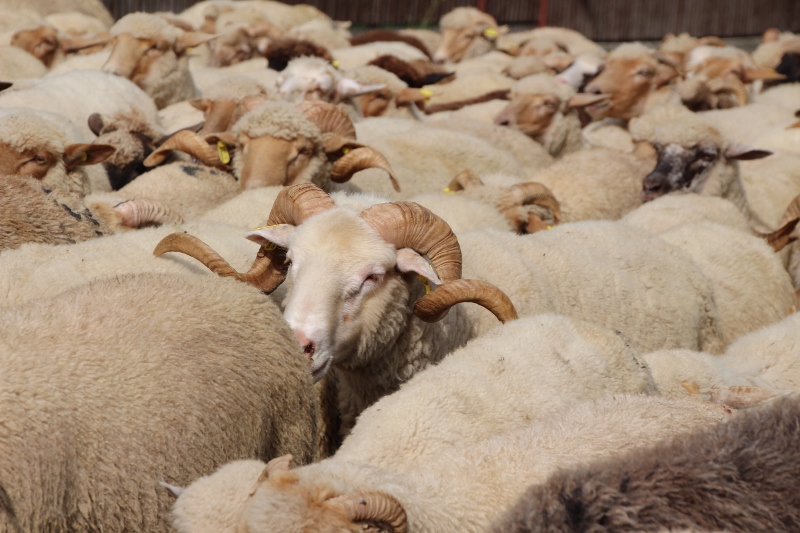 sometimes the roads are temporarily blocked 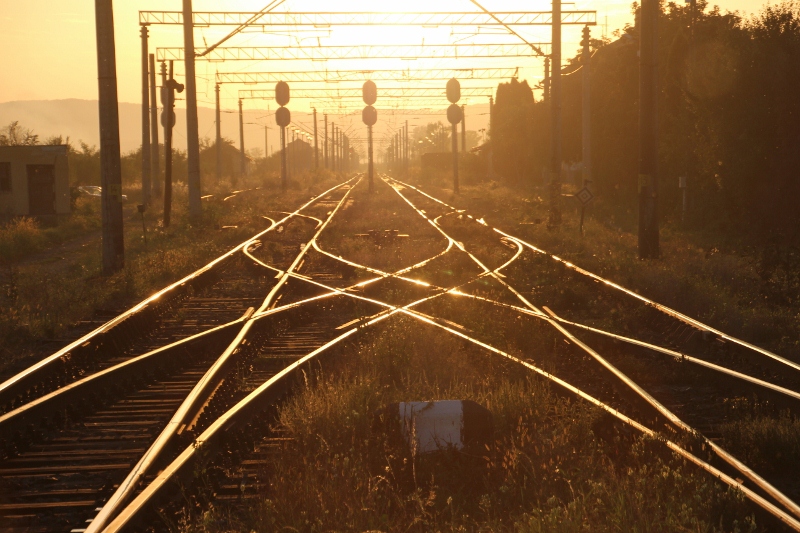