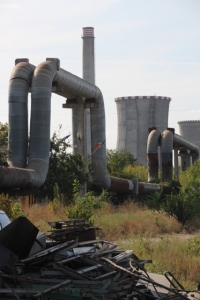 By now you know about my obsession with decrepit factories and with ‘palatis’, in reality called ‘blocks’, here, but ‘palati’ is a much nicer word. A view of what is left of Iasi’s industrial complex, and why. 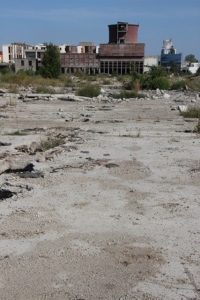 the place of a former factory, now gone to dust – literally

A tour of the old industrial complex of the city is an eye opener. I have already commented on the senseless destruction of capital, huge factory halls falling into disrepair, but here this has been taken to a different level, less visible perhaps, because entire factories have disappeared! Apparently, the privatization mechanism after the 1989 revolution was to sell a factory lock, stock and barrel, preferably to a foreigner with money – not necessarily an investor -, so as to draw less attention to the deal. The buyer would be interested in a quick buck only, and focused on selling the machinery as scrap iron, obviously huge business at the time – and still, presumably, because everywhere in Romania we encountered ‘fier vecchi’ signs pointing to yards full of metal waste. Further metal was to be had from the factory walls: gypsies got rich by spending their time meticulously taking apart the buildings, salvaging the iron bars from the reinforced concrete, and leaving nothing but a heap of dirt on the spot of the privatized factory. Which is why you don’t see those factories anymore. Even the manhole covers also made of metal, have all disappeared. Which makes driving here pretty hazardous! 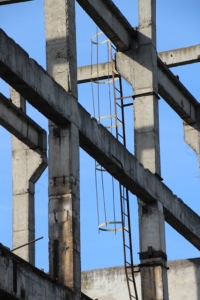 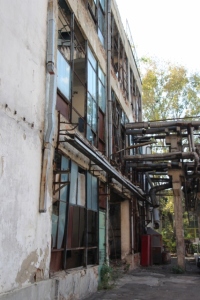 and one still standing, just 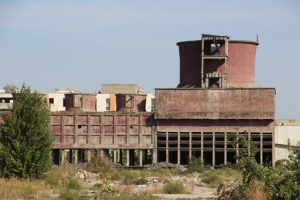 and another one, which is unlikely to ever produce anything again

Not all the factories have been taken down, some of the complexes still sport buildings in various stages of collapse; broken windows, whole parts of the outer walls missing, you know what I mean. None of those are working, there is nothing being produced anymore, from an industrial base that must have had quite some capacity 25 years ago – even though production at the time may not have been the most efficient. Yet, some people have managed to patch up a few corners of those buildings, or some of the smaller sweatshops, and rent them out to Romanian small enterprise, any type of business, really. Car parts, garages, building materials, that sort of thing. In itself a positive development, of course, but what is really needed is some form of legal structure that can be enforced – without it, it will only be the big guys, well connected politically, who will invest. Which also happens: on some of the flattened land new, cheap buildings – corrugated iron, mostly  – have arisen, and are being rented out to supermarkets and retail outlets. 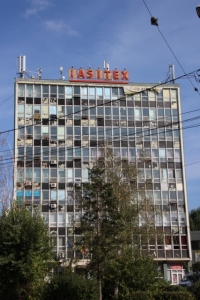 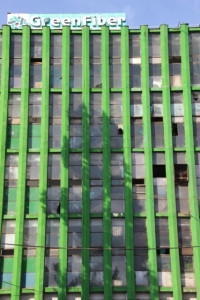 the green building, which I was not allowed to photograph from the public pavement

And then there are the few factories that have been saved, or that have been modernized and are still, or again, producing something. Almost always with foreign capital, but also occasionally with indigenous funding – which, in the eyes of the locals, is immediately suspect, of course, and probably for good reasons.

The dodgy-ness of some of this business was illustrated when I almost got arrested, in one of the complexes. As soon as I had stepped out of the car, to take some pictures, a guard – why do you need a guard, there, in the first place? – approached, rather menacingly. My quick-witted friend told him that I was a potential foreign investor, at which moment his attitude changed completely, and he enthusiastically started to call his boss. Not exactly what we wanted, either, so my friend told him that, really, my first visit had to be kept very low-key, as not to scare me, and my money, away. Which he perfectly well understood, of course. Of course? Elsewhere, I was on the public pavement, taking another picture of a building, when yet another guard appeared, telling me that this was forbidden. Based on what, he couldn’t explain – and even if I had been speaking fluent Romanian, I don’t think that would have changed anything -, but the fact alone that someone comes to tell you to back off means they must have something to hide. Or think they have something to hide. 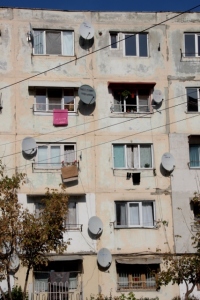 prototype, 5-story palati, where half of your life happens outside 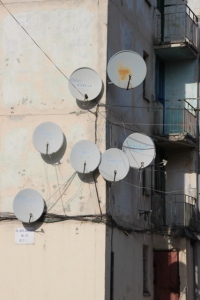 bunch of satelite dishes, outside one of the palatis 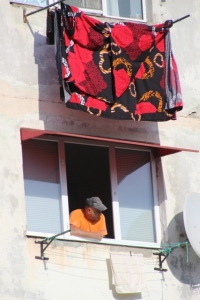 window onto the world 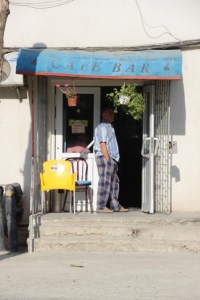 ground-floor apartment being exploited as a cafe-bar 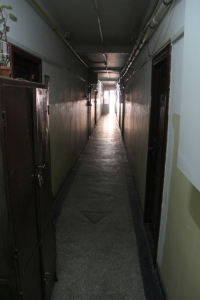 inside corridor of a palati 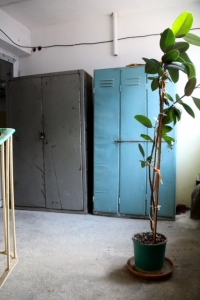 and storage cupboards on the corridors, as well as one plant

In the communist days that built these factories, they also needed people to staff them, and people needed to live, so around the factories, extensive ‘palatis’ were built, with one- or two-room apartments. And a two-room apartment is really that, two rooms, not two bedrooms. But often they came with a balcony. Which, of course, could be closed off, to create extra space. One of the fascinating elements of these palatis – well, the thing that fascinates me – is the creativity and ingenuity with which people have made changes to their individual apartments – and I can only see the outside, so just imagine how this must look inside. We did make  an attempt to see some of this inside, but we didn’t get much further than the corridors – indeed, where everybody has their outside cupboard, locked, because they have no room for that in the apartment itself.

You can read about all of this, these days, and I have done so, but seeing it with your own eyes, and having somebody who lived through this telling you about it, is a whole different experience. And I am still not sure that I can imagine all of it, the concept of living under communism and the subsequent rape of an industrial complex by the happy, non-scrupulous few.

And the saddest thing? We came across one factory building that was almost entirely intact. Built much longer ago, in the 1920’s or so, and with bricks, so there is no scrap metal value in the walls. Fabulous structure. Unused. Forgotten, it seems. Like so much from before communism. It seems.

Next: we go into Moldova,  the Republic, not the province 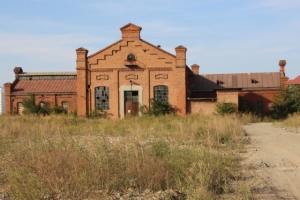 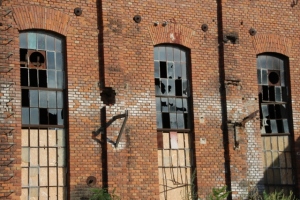 of which the windows have been smashed in, but for the rest, excellent condition