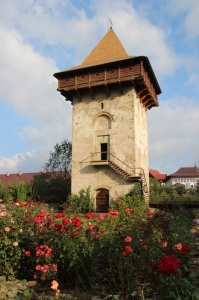 The church of the Humor Monastery in Bucovina, with its fabulous outside frescoes

The Humor church dates from 1530 and was built by one of the noblemen of Petru Raresh, son of Stefan the Great. There is no church tower, but this is compensated by the presence of a defense tower, constructed some 100 years later, when the monasteries were fortified to withstand Ottoman attacks. 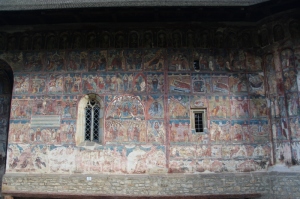 the outside wall showing the Hymn of Our Lady

The most important outside fresco is that of the Hymn to Our Lady, a kind of a cartoon but then a serious one  – you know what I mean. I haven’t counted them, but there are supposed to be 24 scenes. Whilst we were around, the sun came out, giving a totally different flavor to the frescos than if overcast. With the bright sunshine, I can actually recognized the predominantly red colours – which turn to blue as soon as the sun is gone again. 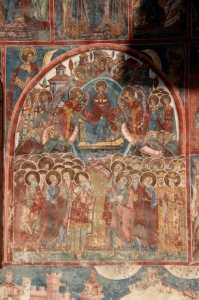 the centre piece of the Hymn to Our Lady, in the sun 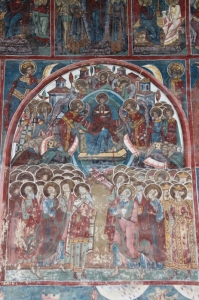 same thing, in the shade – which changes the colours significantly 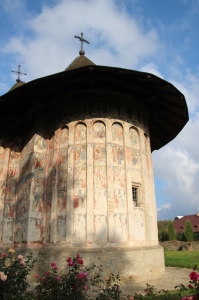 the church of Humor Monastery 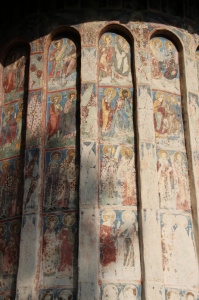 frescoes on the outside of the sanctuary 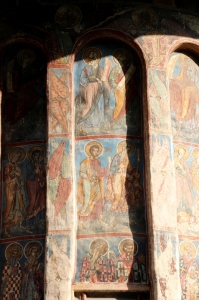 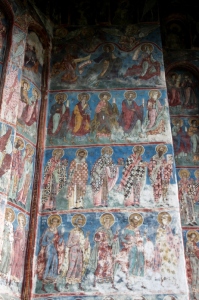