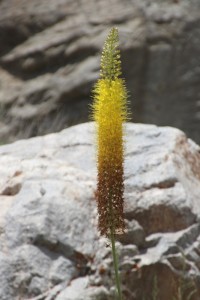 parts of the Panj River valley are filled with yellow flowers

In two days we drive from Khorog to Dushanbe, the last part of the Pamir Highway, and inevitably somewhat less exciting

We continue to follow Panj down-river, still the border with Afghanistan. Where upstream the Afghan side had looked abandoned except for the occasional hamlet on an alluvial fan, it now looks busier and busier, with more and larger villages. An interesting observation is that houses on the Afghan side are compact, grouped together, whilst Tajik villages are set up much wider, individual houses with gardens in between. One wonders how much contact there really is, across the river, now mostly a forbidding fast-flowing stream in between steep mountain sides. 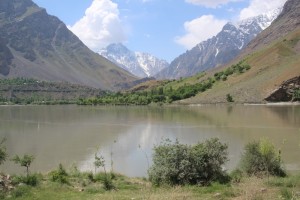 mostly a flast-flowing river, sometimes the Panj widens and slows down

The road follows the river through the same narrow gorges, which occasionally widen to allow for the creation of small lakes and pools, where cattle drink and children swim. There are a number of foot bridges, some which could support the occasional vehicle, too; apparently, this is all financed by the Aga Khan Foundation, which supports Ismaili populations on both sides of the river – there is little trace of any other NGO working here. At the bridge heads joint weekly markets have developed, like the Afghan market we visited in Ishkashim. 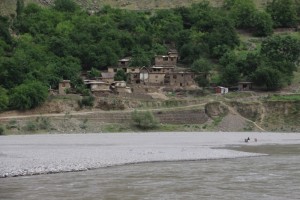 small, compact village on the Afghan side 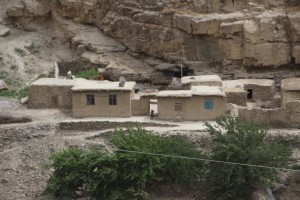 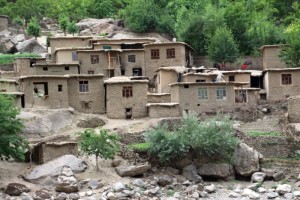 a tight community, as far as house building is concerned 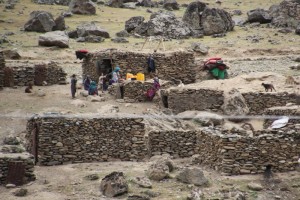 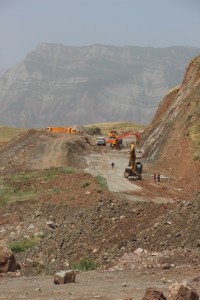 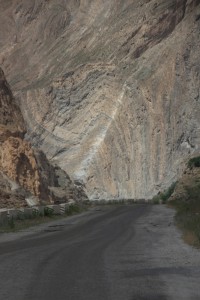 well, one geological photo, then: somebody painted the fold plane 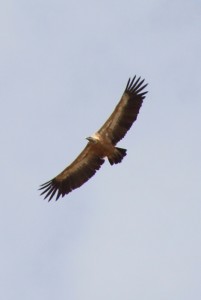 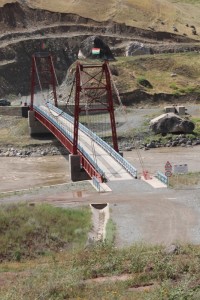 one of the new bridges connecting Tajikistan and Afghanistan – not a lot of traffic, yet

Whilst in Soviet times this road apparently was in good condition, much of it is now in a poor state, and is rapidly deteriorating further, another example of precious infrastructure falling to pieces; the little maintenance that is carried out is insufficient, a bit of earth in a pothole that will disappear with the next rains, or some patches of new tarmac to cover a hole, which is immediately torn up again before it hardens, by the many trucks that plough this part of the Pamir Highway.

Past Kala-i-Khumb, where we – and everybody else who travels from Khorog to Dushanbe or vice versa – overnight, we seem to slowly run out of Pamirs. The mountains get lower, the river wider, and the road somewhat better. There is even a 32 km stretch of excellent tarmac, built by a Turkish company 15 years ago, who unfortunately ran out of money because they also had to build several houses for local officials, and had to provide them with flashy cars, too. An Iranian company has now taken over, and a flurry of road construction activity bodes well for the future. 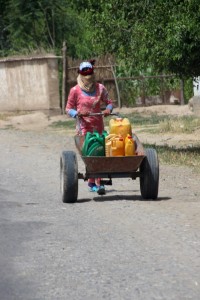 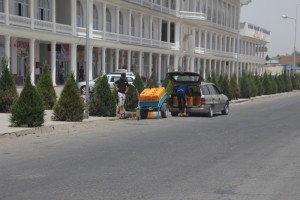 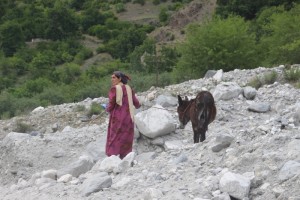 a woman walking her donkey

We finally leave the Panj River, and the Afghan border, behind us when we climb a 2000 m, or so, pass towards Kulob, where we enter another world. Gone are the simple villages, the small one-story houses, the agricultural patches of land, the dust roads. Enter a modern town, with lots of new construction, including relatively attractive high-rise buildings. Good roads, lots of cars, too. And guess who is back, too? Police checks, not for the GBAO permits, but for extracting as much direct taxation as possible. The one just outside Kulob is the worst we have seen so far, policemen stopping every car, circling around them, peeking inside, checking and registering passports, with the obvious sole motive of finding the slightest reason to level a fine. And just when you thought you were through, 500 meters further is the army check point, which also needs to register our passports, completely and utterly useless. Of course, you need to pay a little for this registration… 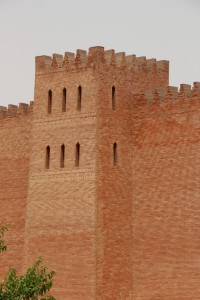 a tower of the fortress: 21st Century replica 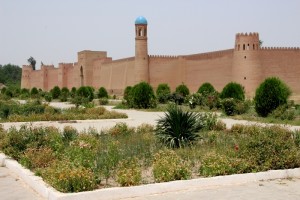 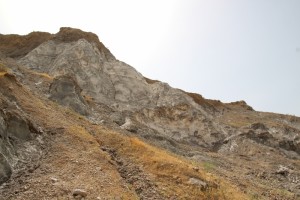 the Khoja Mumin salt mountain near the town of Vose

The next hours we drive through low rolling landscape, hardly visible because of the haze that has been accompanying us for the whole day, but in any case not very attractive compared to the impressive mountain scenery we have become used to. A rebuilt castle and a salt mountain are the only distractions from the road. Until we come to Dushanbe, into another world. 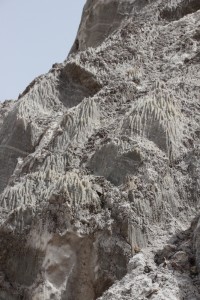 a salt mountain it is 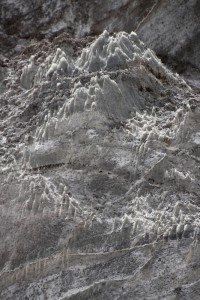 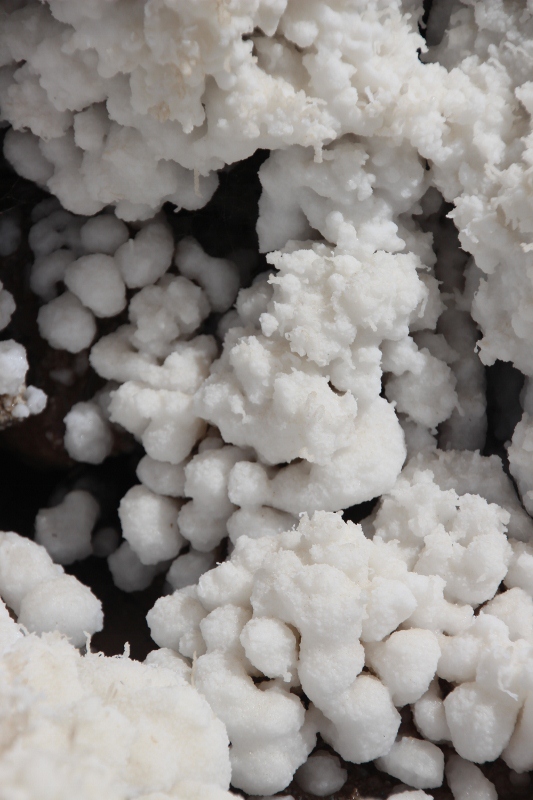 as well as salt redeposited