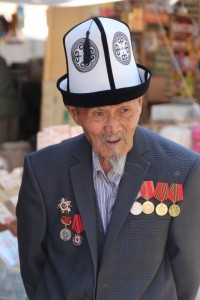 one of the customers in the Osh bazaar in Bishkek

The way to travel in Kyrgyzstan is by minibus, quick and comfortable, which is what we did to get back to Bishkek

In order to start our third leg of the journey, traversing the Pamir Highway, we had to return to Bishkek, from where we had arranged a car and a driver. Although we usually prefer public transport, traveling the Pamir Highway in Tajikistan by bus may be a little more complex, mostly due to the lack of buses, or trucks that take the occasional passengers, and those that go, go irregularly. 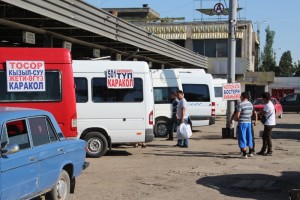 marshrutkas lined up for various destinations in the bus station

Having said so, in the rest of Central Asia travel by public transport is extremely easy. I have already mentioned the shared taxis, that depart when full – or as soon as somebody agrees to buy the rest of the empty seats, and then it becomes a private taxi, all still very competitively priced. Our favourite, however, is the marshrutka, an 18-seater minibus that you see everywhere, here. They cruise the streets of the towns, you wave them down wherever you are, pay the driver a little, and get out as soon as you think you have more or less reached your destination (or somebody in the bus tells you to get off, for the same reason) – our language skills remain fairy rudimentary. But marshrutkas also travel intercity routes, departing from the bus station (the auto-voksal; you no doubt remember the origin of the word voksal?) when full, which depending on the destination takes anything between 10 minutes and an hour, perhaps. But, contrary to what happens in so many other places in the world, once it departs, it goes in one, straight route to the next town, without endlessly dropping off and picking up passengers along the way. Very convenient, and seats are very comfortable, too. 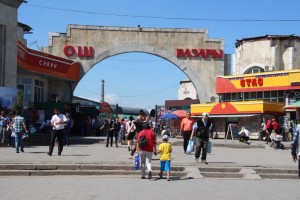 entrance to the Osh bazaar in Bishkek 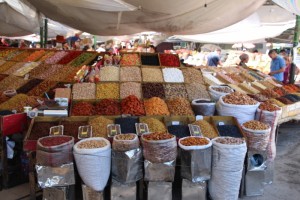 overview of the dried fruits department, well, one of them only 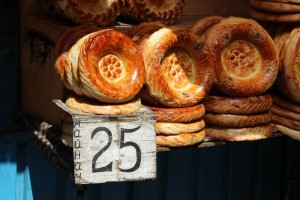 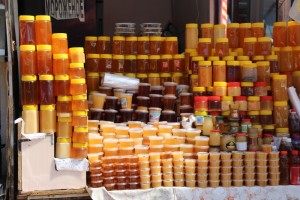 one of the honey stalls 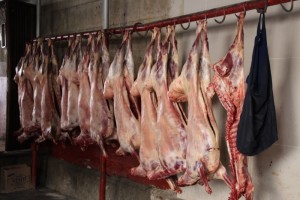 fresh meat being sold wholesale to the butcher shops 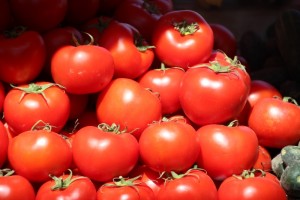 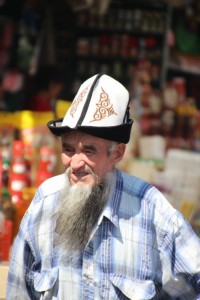 another man roaming the bazaar 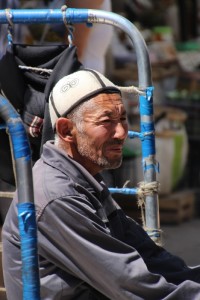 one of the porters, waiting for work 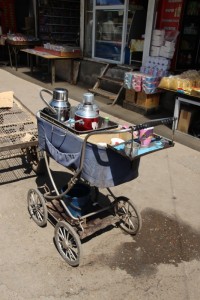 the tea lady is gone, left her trolley unattended 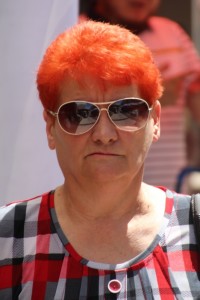 another customer in the bazaar

So, we went back to Bishkek by marshrutka. Did the one thing we hadn’t done yet in Bishkek, going to the bazaar; after all, the Osh Bazaar in Bishkek is the biggest in the country, very lively and very colourful. And look at it this way: otherwise I wouldn’t have had any pictures for this entry! 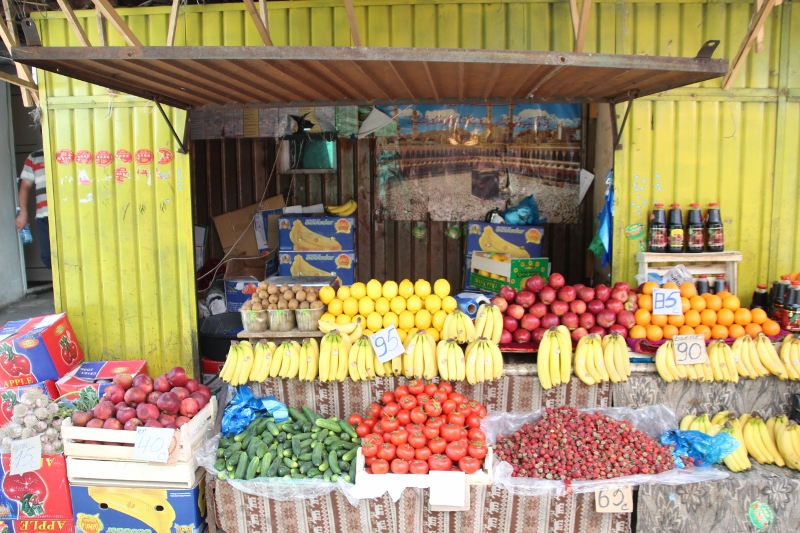 and the container shop, or one of them

One Response to 26. back to Bishkek