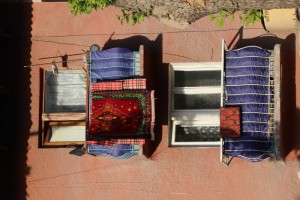 balconies in the centre of Osh

Kyrgyzstan’s second city, Osh, is in fact a rather small-town affair, but marked by both ancient myth and more recent history

Our time is up, in Uzbekistan. We head for the border with Kyrgyzstan, once again a couple of shared taxis away. In fact, we buy all the seats in the taxi, which provides ample space for our luggage and ourselves. Land border crossings are notorious, in this part of the world (and in many others), with customs officers trying to shake down unsuspecting tourists, soliciting bribes whilst searching your luggage, or just being difficult because they can. Especially exiting Uzbekistan, with its strict rules on registration and on foreign currency, is supposed to be bad.

None of it. A friendly customs officer called his friend as soon as he realised our origins, to discuss in detail the Dutch football competition, and the merits of Messi and Maradona, and that took most of the time, really. Big smiles all around, and in no time we were on the other side, in Kyrgyzstan, and in a bus to Osh, which is really only a few kilometres away from the border. 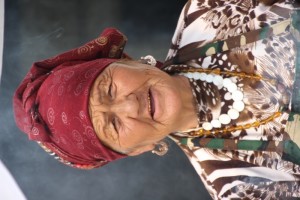 a woman in the Osh bazaar 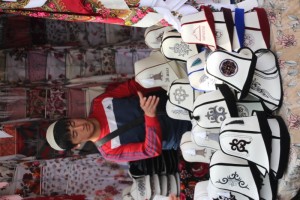 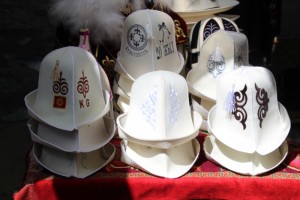 Kyrgyz felt hats in all the available colours

Osh is another one of these old Silk Road cities, both trading centre as well as silk production centre, situated at the entrance of the Fergana Valley. Although technically in Kyrgyzstan, a large part of the population is ethnically Uzbek, which has led to several rounds of violence, in 1990 and again as recently as 2010, with perhaps as many as 2000 dead, and hundreds of thousands who fled their homes. Somehow we are crossing not just a geographical border, but also a cultural one, between the more Turkic, settler-like Uzbeks and the more Mongol, nomadic Kyrgyz.

The centre of town is near what is called Solomon’s Throne, a steep rock set to have been the seat of King Solomon in biblical times. Rather unlikely, but never mind; the one who definitely has been here, and even built a mosque on top of the rock, is Babur, the late 15th Century khan who became ruler of Fergana when he was 12 years old, only to be chased out by competitors to the throne not much later. Babur claims 5th generation descent from Tamerlane, and 15th generation descent from Ghengis Khan; perhaps equally unlikely as the Solomon story, but Babur nevertheless pulled off a veritable stunt by moving to Afghanistan, and then on the India, where he established the Mughal empire which ruled from Delhi for well over 300 years. 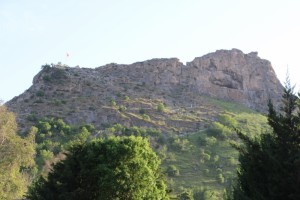 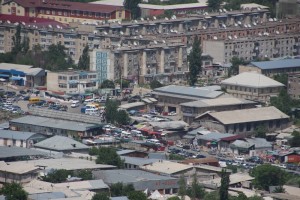 view of the market and the bus station, from Solomon’s Throne 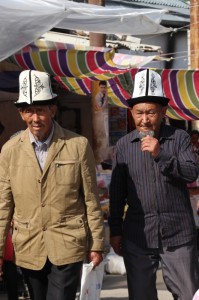 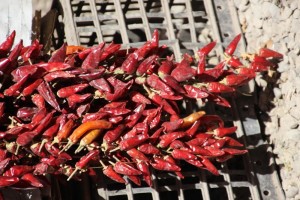 chili peppers for sale in the market 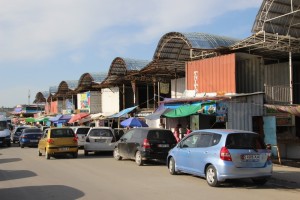 containers are the main building blocks, litteraly, of the bazaar in Osh 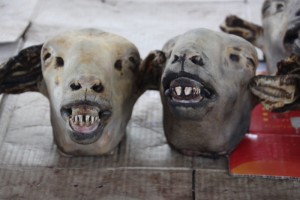 all sorts of things for sale, in the bazaar, and at least some are in for a smile 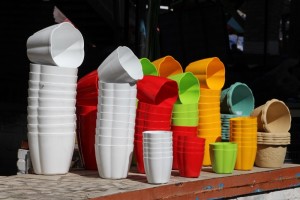 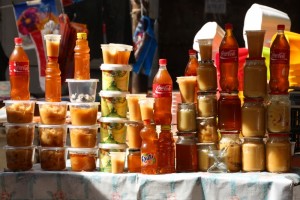 and more plastics, bottled filled with something, I don’t know what exactly (it is not honey)

There is not much on top of the rock, just the view over town, and of the distant, snowy mountains, as well as an ice cream seller who does brisk business with all the many Central Asian Muslim pilgrims who flock to this site, the Solomon connection being of considerable importance. Down in the town itself is the usual bazaar, less busy, less friendly, and with less of an atmosphere than the Uzbek bazaars we have visited. The Uzbek skull caps have made way for the Kyrgyz white felt hats, a kind of mini-yurt proudly positioned on a man’s head. Much of the bazaar consists of containers turned into shops, a bazaar structure more often found in this part of the world; less photogenic than earlier bazaars, until I got invited in the men’s tea house. I had taken a picture of the tea house, and walked around to show some of the men the result, and suddenly all of them, also the ones on other tables, wanted a picture taken of themselves, too. To which I grudgingly agreed, of course! the tea house along the river, only for men, obviously 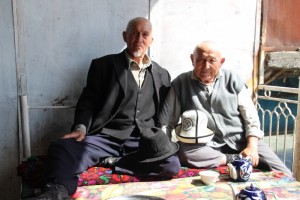 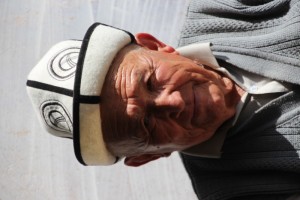 and a portrait photo of the same man 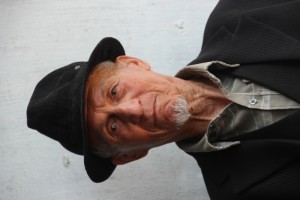 and his friend, hat put back on 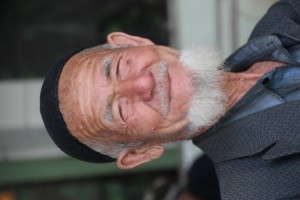 one of the other men in the tea house 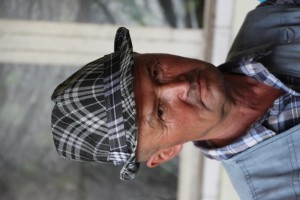 and yet another one, serious-looking 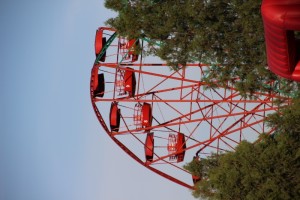 The centre of Osh is not very big, with its obligatory park – where we ate very well, with Georgian wine: Kyrgyzstan doesn’t seem to make its own wine, and thankfully imports wine from Moldova and Georgia, not from Uzbekistan! -, its Ferris wheel (every self-respecting town in Central Asia has a Ferris wheel) and its selection of statues of local heros. Ever-present palatis with closed-in balconies, the first attempts at a shopping mall, called Pekin Plaza, full of cheap Chinese-import electronics, and the first metered taxi we have seen in a long time! A pleasant enough place to spent a day or so, which is exactly what we did. 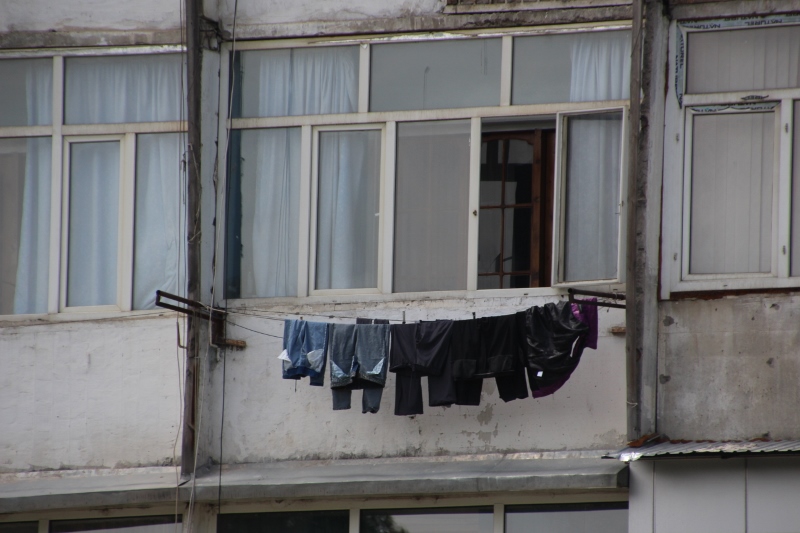