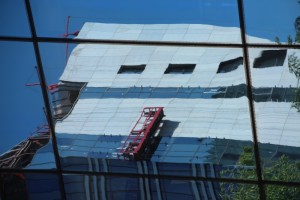 The most cosmopolitan city in Central Asia, Almaty is booming, rapidly shedding its Soviet past, although the Soviet-era Victory Day is still being celebrated, in ballet-form!

It is hard to believe we are still in Central Asia! After three weeks of travel through mostly dilapidating cities, admittedly with some great monuments and some colourful bazaars, but with most of its Soviet era infrastructure and architecture showing distinct signs of age, we have arrived in Almaty, a modern city with trendy cafes and restaurants, well-equipped outside terraces, fashion shops and levelled pavements. Even the Soviet architecture looks more attractive than elsewhere, the outskirts are full of new, colourful apartment buildings, and even the palatis in town – the ubiquitous Soviet-style housing blocks – seem better maintained than we have seen in most other places. 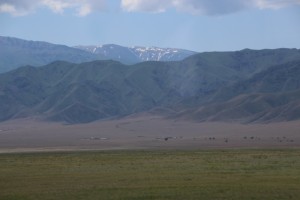 the vastness of the Kazach country side, between Bishkek and Almaty

As our cross-country Kyrgyzstan trip hadn’t worked out because of road closure, we decided to pay a quick visit to Almaty, just across the border in Kazakhstan. Driving in from Bishkek in Kyrgyzstan, the vastness that is created by endless plains and low rolling hills is impressive, somewhat reminiscent of Argentina, perhaps. Herds of cows, and horsemen trying to control the cows that randomly cross the motorway, add to this picture. Although not the capital – that honour befalls a Brasilia-type newly constructed Astana, somewhere towards the middle of the empty vastness that is Kazakhstan -, Almaty is still the city where business and commerce is concentrated, and it shows. Almaty is much more cosmopolitan than any other Central Asian city. 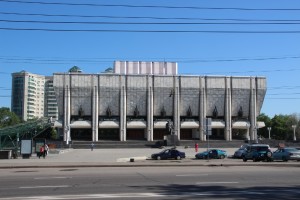 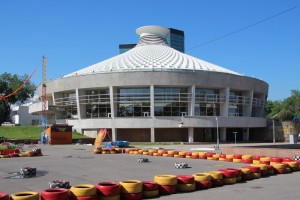 and the Circus, no doubt also Soviet, but more playful 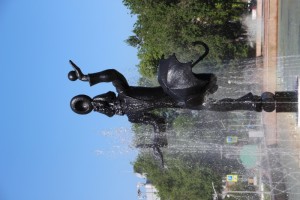 next to the Circus a modern statue of a clown: how playful do you want it? 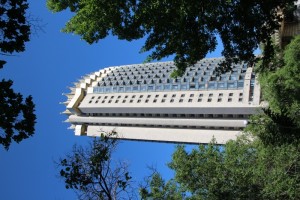 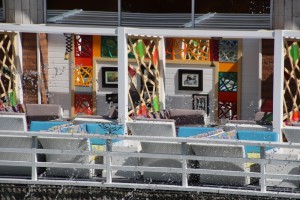 but even in this Soviet monster, the terraces downstairs have beem given a facelift

Well, except for the Hotel Kazakhstan, perhaps, although even here the terraces have been refurbished with colourful decorations. We headed for the hotel, because the cable car that can take you up to a nearby hill, from where there is a splendid view over Almaty’s southern mountains, snow-capped against the blue morning sky, this cable car wasn’t running anymore – perhaps for the better, as my more-than-ten years old guidebook already called it rickety. What better alternative to see the mountains than from the top floor of 26-story Hotel Kazakhstan. Except that the bar on the top floor was closed, and a rather tall and big man in dark suit was guarding the entrance to the lifts. But I can look very authoratative, and in Almaty that works, so I just walked into the lift, went to the 25th floor instead, told a few workers that were tiling a bath room in one of the largest suites I have ever seen, that I was here to take a couple of photos, walked into the suite, opened a few windows, and got the most breath-taking view over the mountains. Perhaps next time I rent the suite! 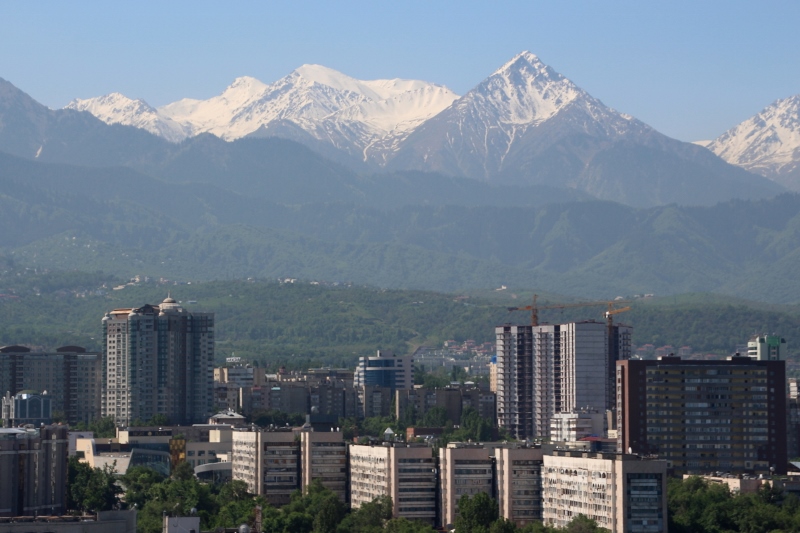 and the view from (almost) the top floor, the Zailiysky Alatau Range

In both Tashkent and Bishkek we had attempted to visit a classical concert, but failed due to lack of performances. In Almaty we tried again, and we managed to get tickets for a ballet performance in the Abay State Theatre of Opera and Ballet. An experience in itself. The first half, about an hour or so, was a compilation of various bits and pieces, some Stravinsky, some unreconstructed Soviet propaganda music, the odd flamenco. Especially the more folkloric pieces, lots of Kazakh-type costumes, did well with the audience. After a brief interval filled by an obviously popular local singer, the real thing started, a one-hour ballet depicting – you guessed it, after all, we are celebrating the 70th anniversary of Victory Day – the outbreak of the war, and how normal boys and men went off to fight, women stayed home to run the factories, some men died, or lost a leg, but in the end we all celebrated the Great Victory. A rather bad ballet, with lots of running and jumping, but little elegance and emotion – apart from crying mothers and wives -, but an experience it was, including the speeches at the end, of heavily medalled men who obviously had been there, 70 years ago. As in the other ex-Soviet republics, the end of WWII is still very much alive, and shamelessly exploited for the nationalist good. 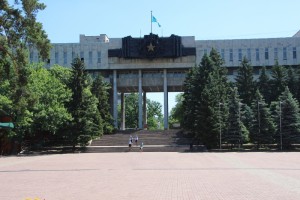 the extensive war memorial in Almaty 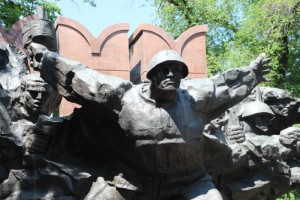 and a detial of one of the sculptures at the memorial 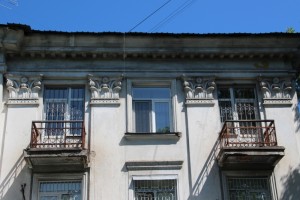 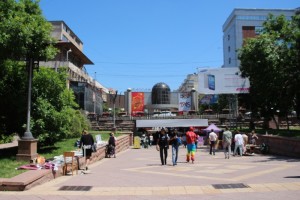 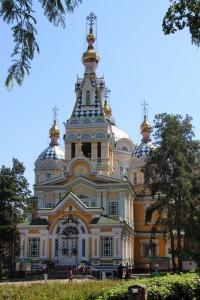 the Zenkov Cathedral, also predating Soviet times, and entirely made of wood 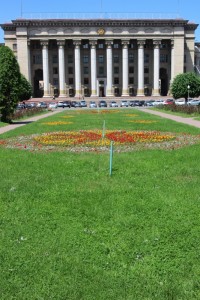 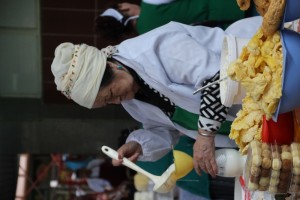 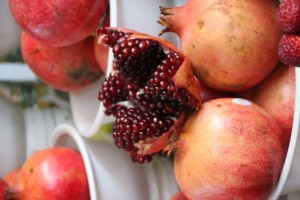 and a pommegranate, same bazaar 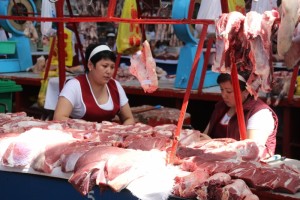 one of the many meat stall in the Zellyony Bazaar

We thoroughly enjoyed two days Almaty, wandering the boulevards, including a real pedestrian zone, appreciating the 19th Century Russian colonial architecture – Almaty was essentially a Russian city built as a frontier post back then -, checking out not only the local bazaar (of course), but also the well-stocked supermarkets, eating Italian and Turkish food, drinking ice coffees outside a shopping mall, and taking the metro back to our hotel – what must be one of the deepest, yet simplest metro systems in the world, with one line and just nine stations. 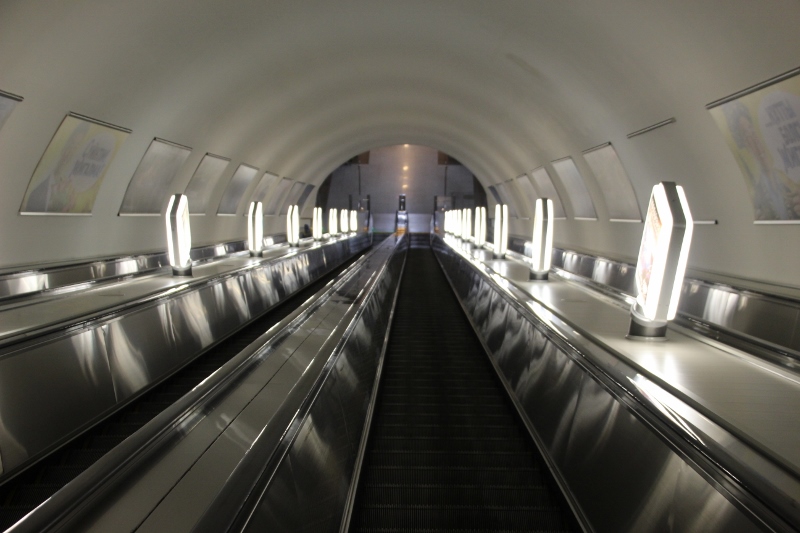