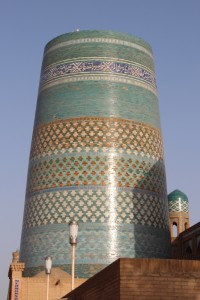 Well-preserved, albeit not so very ancient walled city with many attractive buildings, and an interesting bazaar to escape the flow of visitors

Although Khiva may well have existed for a very long time, and may even have been an oasis at the time of trade along the Silk Road, present day Khiva really only came into existence in the 16th Century – at a time that the overland trade was already in decline. Which might as well, because Khiva was chiefly known for its cruelty. My travel guidebook puts it nicely: “Treachery and murder suffused daily life, and too often trade took a backseat to theft”. The most successful trade was the slave market.

two Khiva men at the west gate of the walled city 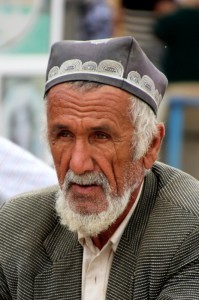 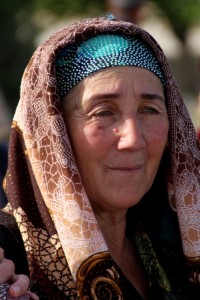 one of the local tourists 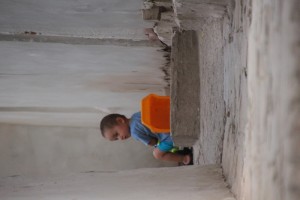 and a young boy in the backstreets of Khiva

This would be the khanate’s downfall, in the end increasingly powerful Russia was quickly getting fed up with its caravans being plundered and its citizens being abducted and sold into slavery. Yet it took three campaigns to finally subdue Khiva: the first, in 1717, was a typical example of Khivan treachery, the khan warmly welcoming the 4000 Russian troops, offering them accommodation and distributing them in small groups over houses all over town, to subsequently massacre each of the groups to the man. For good measure the expedition’s leader was tortured, flayed and his skin stretched over a drum. The second expedition, 100 years later, never made it to Khiva, as the Russians got stuck in the winter snow, but the third, in 1873 – and with what Rudyard Kipling named the Great Game heating up, the rivalry between Tsarist Russia and Britain over dominance over the region between India and Russia – the third campaign was decisive in that it turned Khiva in all but a vazal state to the Tsars. 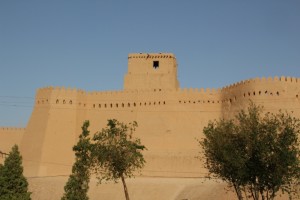 the view from our hotel, the outside wall 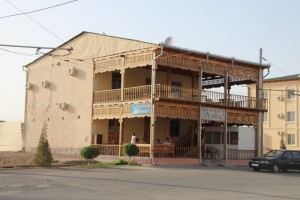 Khiva’s main attraction is the Ichan Kale, the walled city that was declared a museum town during Soviet times, its mostly 18th and 19th Century buildings restored. Our small hotel was right outside the main entrance gate, and from our comfortable terrace we observed the wall, and the watch tower of the Khan’s palace. As well as the arrival of hundreds of busses on the Sunday morning, between 9 and 10 am: what we didn’t know was that at the end of the school year, in May, schools in the wide surroundings organise an end-of-year trip for the children, and since there is really only one place to go, all turn up in Khiva, on a Saturday or a Sunday in May. Same Sunday we were there… 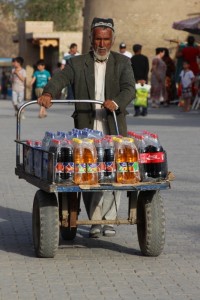 drinks seller in the old town 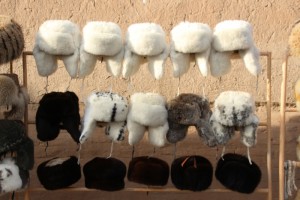 souvenirs, woolen hats in summer (did I miss something?)

And yet, although it was very busy, for most of the day, and there was the occasional “hello”, and the occasional posing in the photo with the foreigner, the kids were extremely polite, well-behaved – we have often experienced the opposite in many other places in the world. And not only the kids. The inevitable souvenir stall holders, the tourist guides, the waiters outside restaurants, nobody forced their wares, their services upon you, everybody assumes that the tourist is intelligent enough to make up his own mind, make his own choice, without having to be pestered every moment of the day. So it is possible! Let the Egypts and the Ethiopias, the Indias and the Indonesias of the world take note. 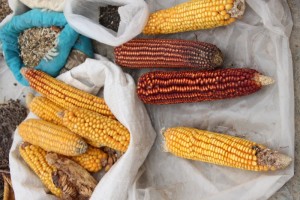 roasted corn for sale in the bazaar 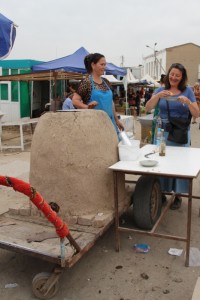 the mobile clay oven, and a cook selling samsas to a brave tourist 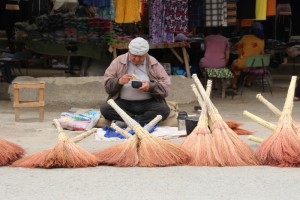 broom seller having his lunch 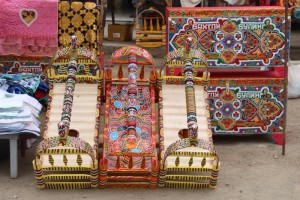 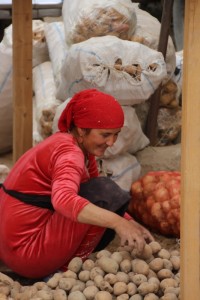 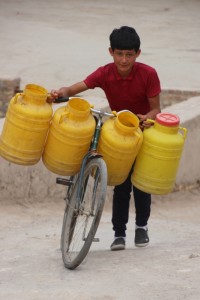 water carrier, although to be fair, these bottles are empty

To avoid the crowds, we wandered the bazaar for a while, appreciating the local produce and enjoying some of the local snacks. Top on the list in terms of local products were the baby cots with a hole at the bottom, for obvious reasons, and from the snacks the samsas, pastries filled with meat that are cooked on the inside of big, mobile clay ovens, did particularly well. This is also the area where men with large bags quite openly exchange money, undisturbed by passing policemen.

Later in the day, after the children had left, we explored the walled city again. Khiva’s defining monument is, funny enough, a half-finished minaret, called the Kalta Minor. The story goes that the khan at the time wanted the tallest minaret on earth, at least taller than in rivalling Bukhara, but when he found out that the architect he had commissioned had secretly agreed with the emir of Bukhara to build an even higher minaret, he threw him of the unfinished tower. Perfectly in line with the reputation of Khiva (and to be fair, the reputation of Bukhara was not much better). I could talk about all the fabulous madrassas, the religious schools, or the palaces and the mosques, but guide books do a better job. Save to say that my favourites were the Juma mosque, a huge prayer hall with hundreds of decorated wooden beams upholding the roof, and a couple of open courtyards providing light, and the Tash Hauli palace, a total of three beautifully decorated and colourfully tiled courtyards, the biggest one for the harem of the khan, and two more, accessed through a separate entrance, for reception and for dispensing justice (some would say dispensing judgement…). Fittingly, the first architect who was commissioned to build the palace, humbly suggested that the three years in which the khan wanted it finished may not be enough, and was subsequently impaled.

A gallery of pictures is the most efficient way to give you a taste of the Khivan monuments. 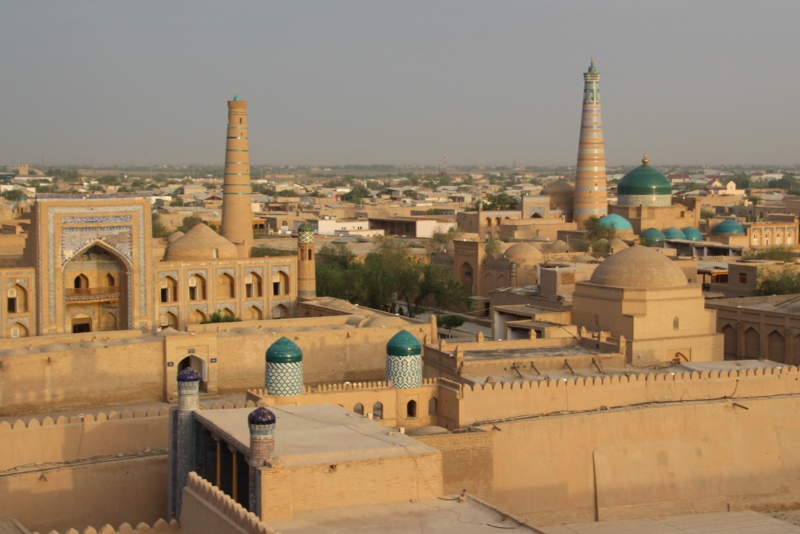 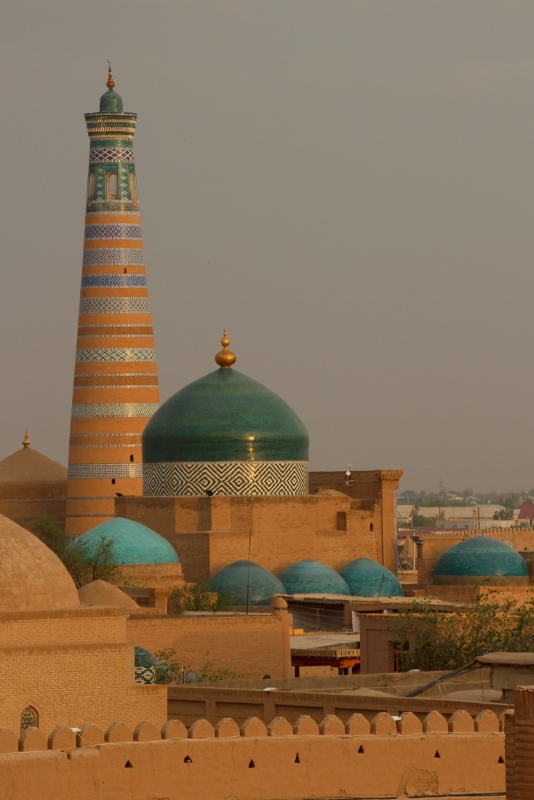 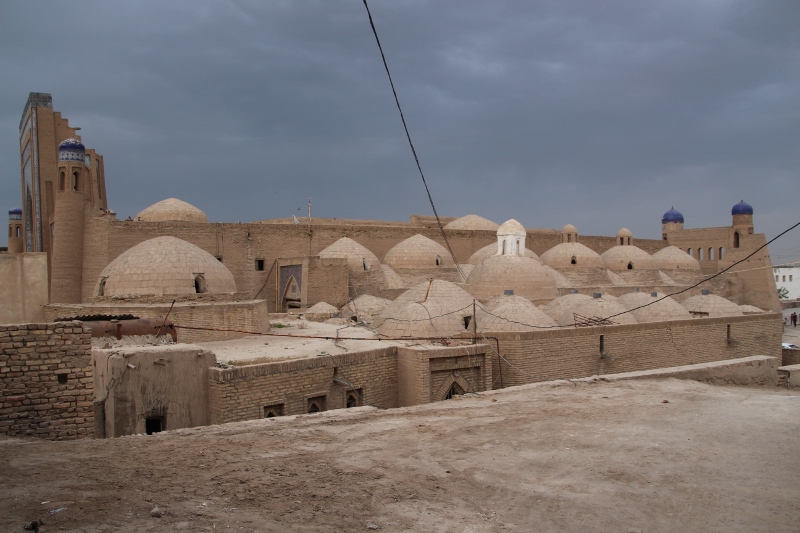 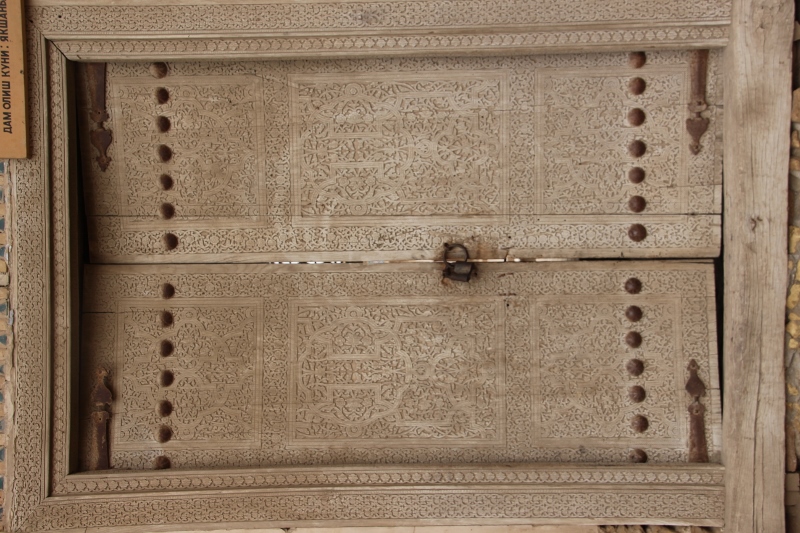 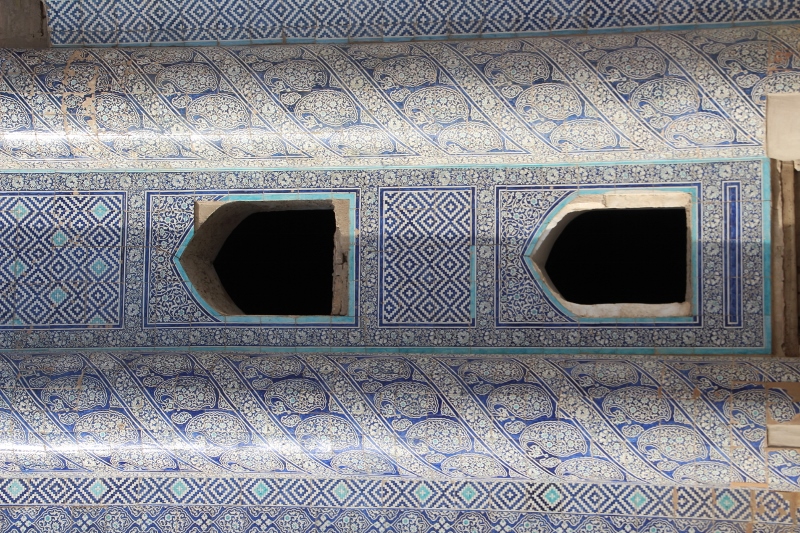 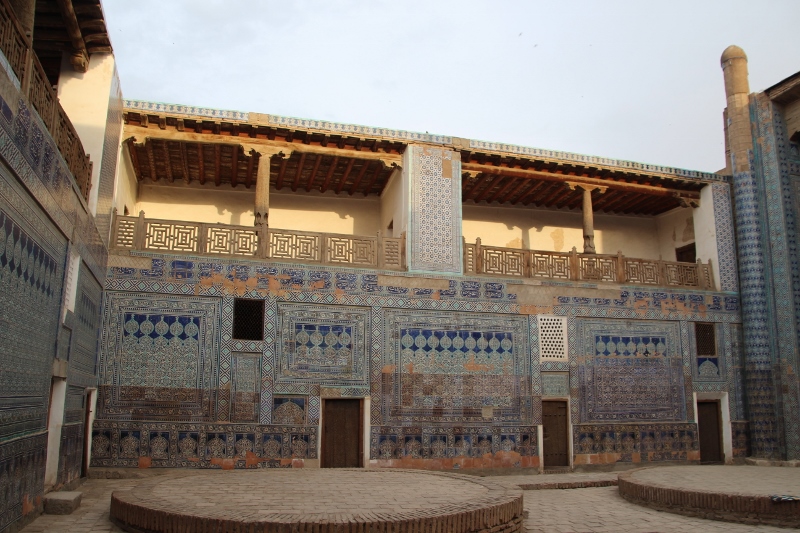 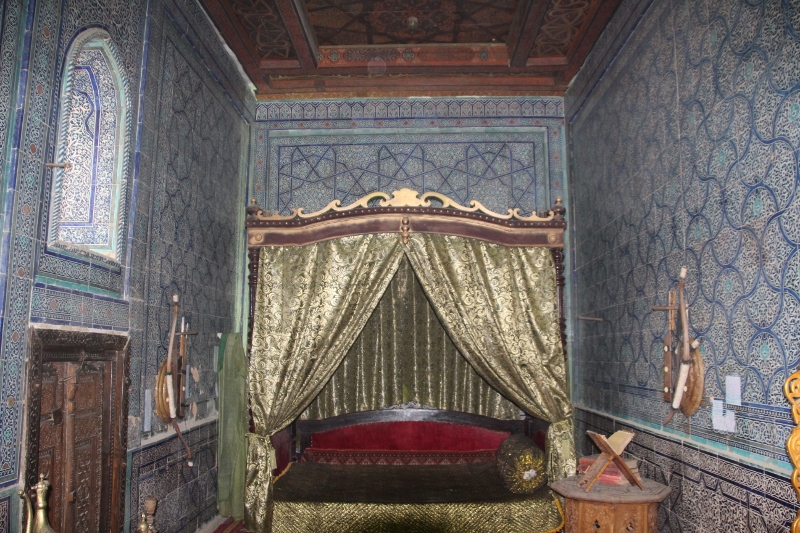 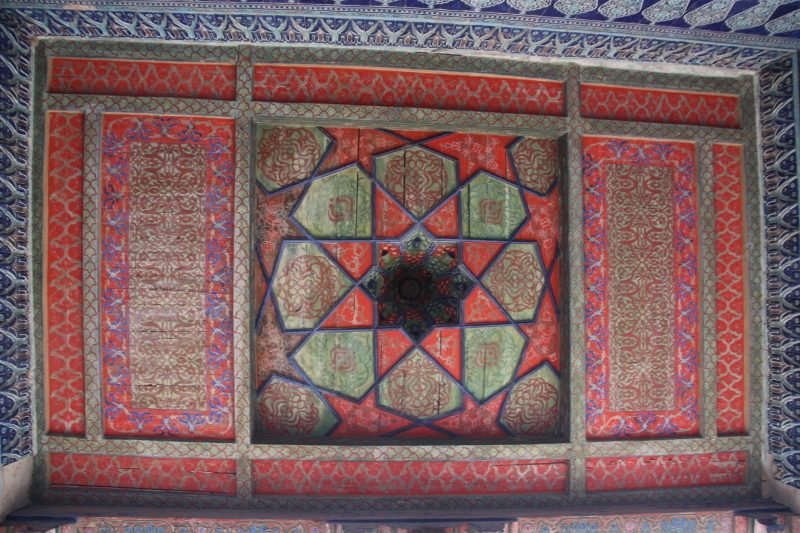 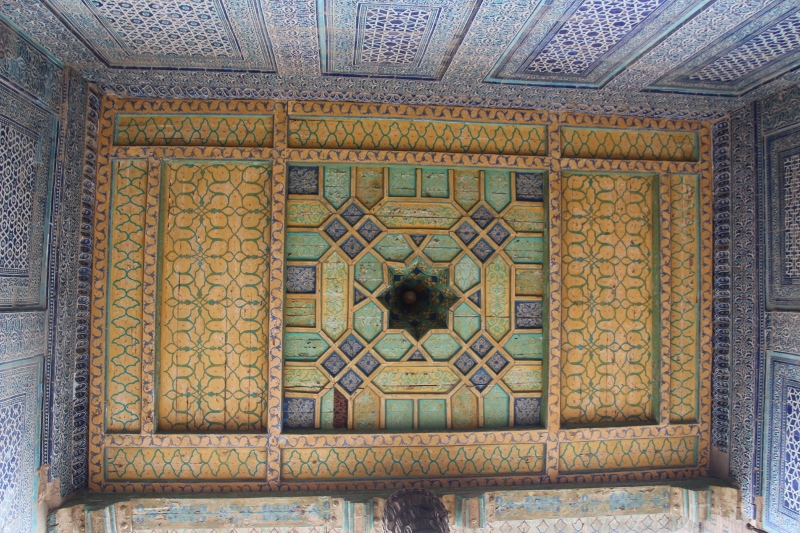 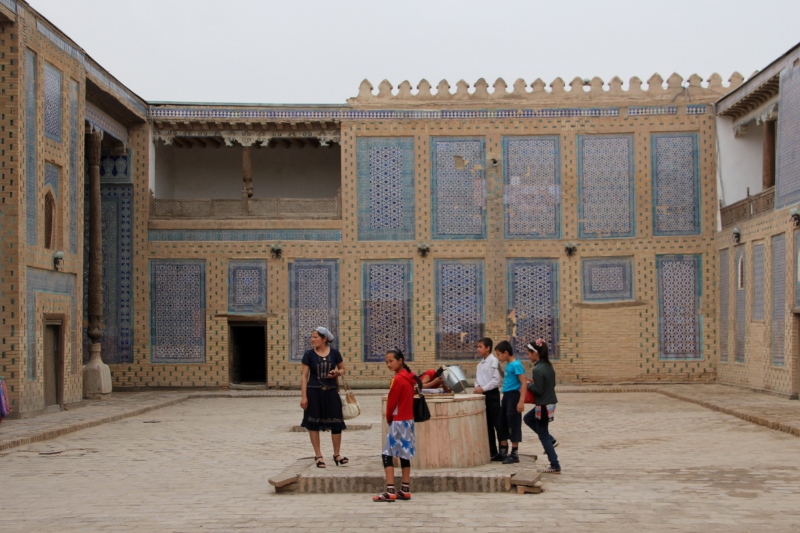 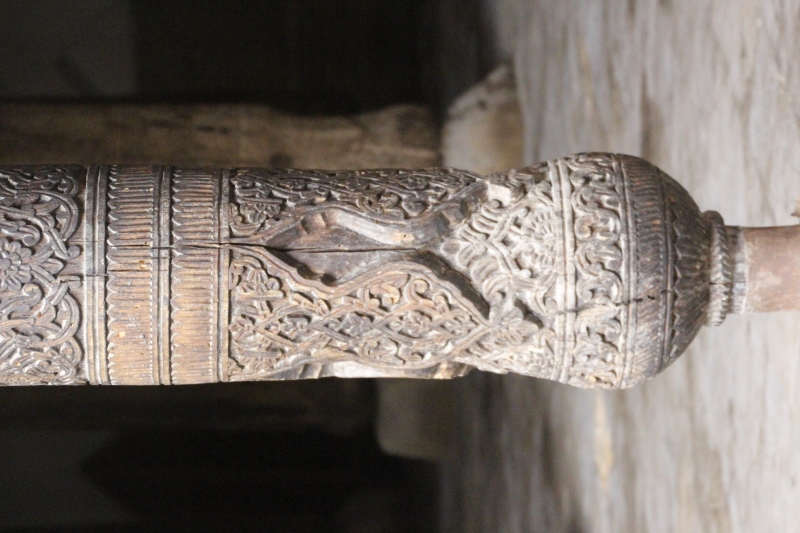 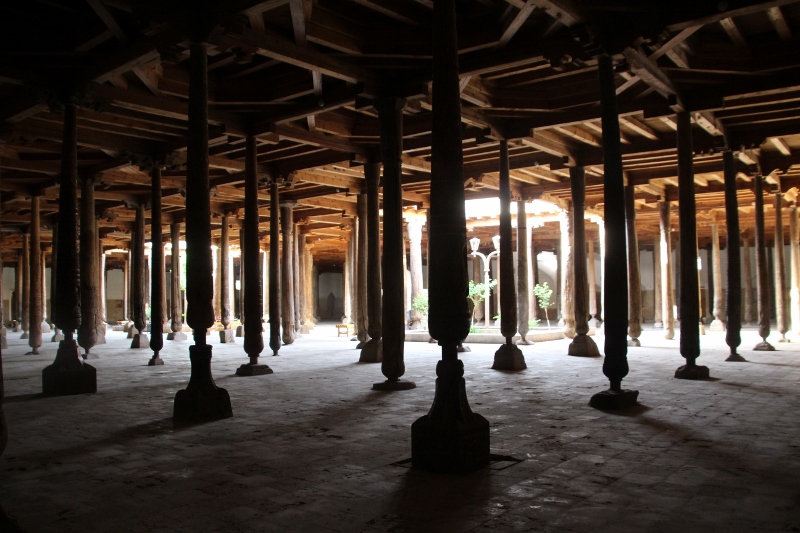 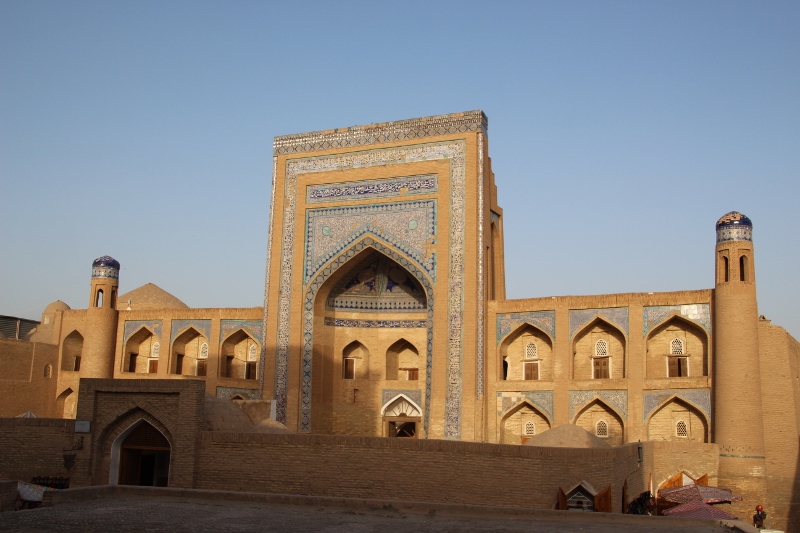 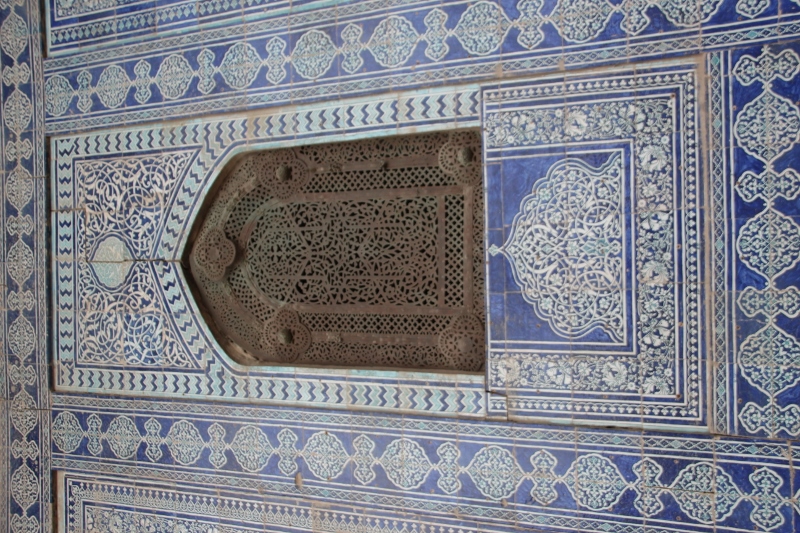 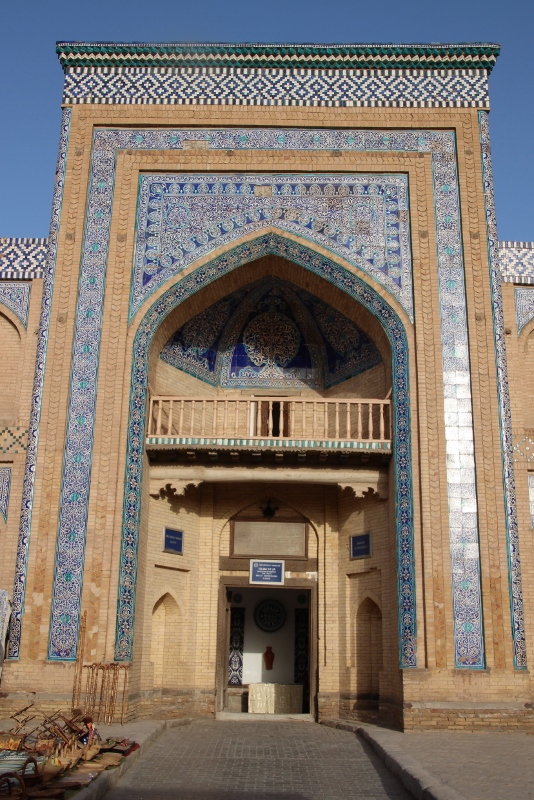 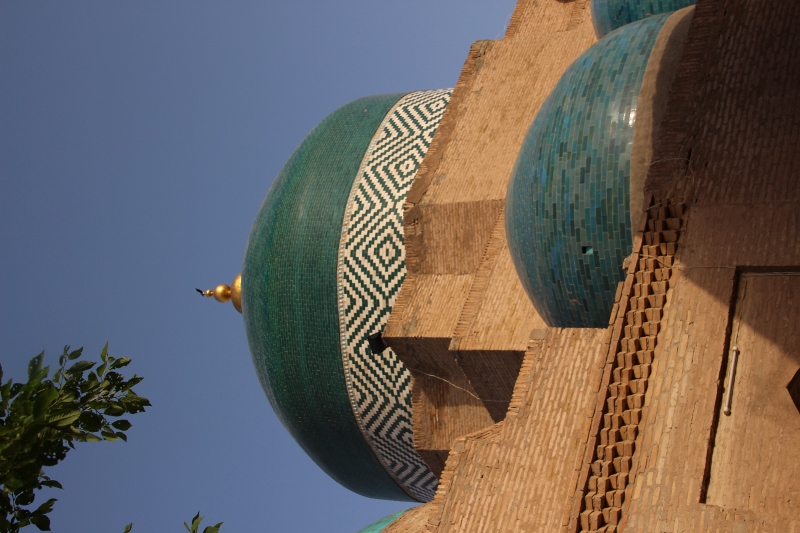