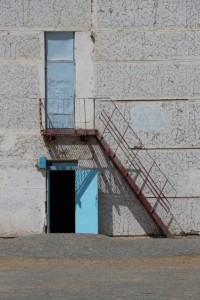 a door in Nukus

Soviet-style town, capital of Karakalpakstan, Nukus has little to offer the visitor, except for a view of the river, a hyge cemetery, and especially, the museum.

Our first stop this journey is Nukus, the capital of our first ‘stan’, Karakalpakstan – technically not a real ‘stan’, because it was never an autonomous SSR (Socialist Soviet Republic), but only an autonomous region within Uzbekistan. According to our guidebook, Nukus “is of limited interest to either tourists or inhabitants”. Which is a little harsh. It is actually an example of how the Soviets went about designing a new town. Ella Maillart, a Swiss woman who travelled what was then called Turkestan in 1933, arrived at the village of Nukuss on her way back to Moskou, to be told that soon they would be building a new city here. They did. 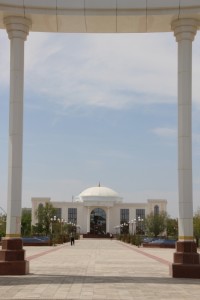 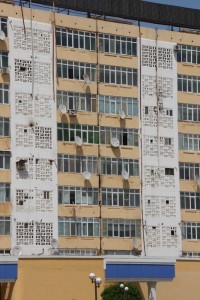 an appartment building in the centre of town 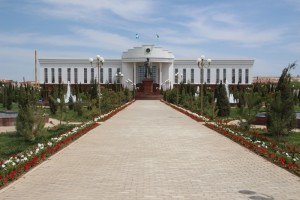 the government builing which one is forbidden to photograph

Wide avenues, non-descript office buildings that in nothing seen to be different from the apartment buildings, my favourite ‘ palatis’ (an Albanian term that refers to housing blocks five or six floors high – so that you don’t need to install an elevator – and constructed with as little architectural fantasy as possible; although, to be fair, there is some attempt in decoration at some of the buildings). There is no town centre, or it must be a junction where two restaurants, a fake flower shop and a fruit beer and ice-cream garden come together. One can wander for hours – well, for quite a while, anyhow – along the streets without encountering anybody, any shop or coffee house, and just walking around the local parliament building, which one is not allowed to photograph, will take you 20 minutes. 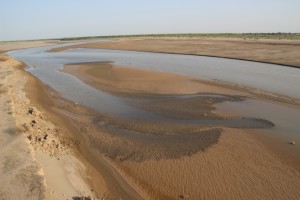 the mighty Amu Darya, on its way to the Aral Sea

Furthermore, Nukus is a good base from which to explore the Aral Sea, something we do not intend to do. Nukus is on the Amu Darya, the river that used to feed the Aral Sea, but doesn’t anymore, thanks to excessive water use for irrigation – the same Ella Maillart travelled the Amu Darya by boat in 1933 when the river was still some two miles wide after the rains, which is now quite impossible, I should think. 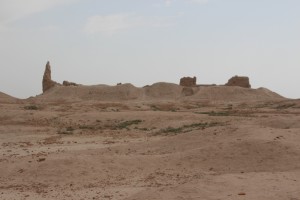 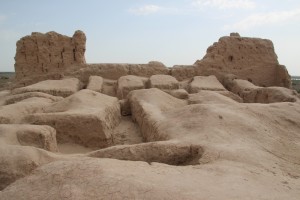 the last remaining wall, and several chambers in front 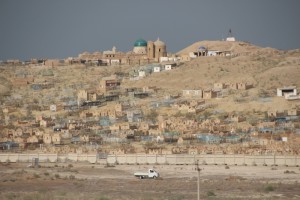 Outside Nukus is a nondescript desert fort, Gyaule Kale, from which just a few pieces of the mud walls stand upright (but which is an obviously attractive meeting place for young couples, several of which we disturbed in their intent to get to know each other better). From the Kale one has a great view over Mizdarkhan cemetery, which according to local sources is already in use for well over a thousand years. The cemetery, spilling out over a hill, does indeed have some old looking tombs and mausoleums, but even many of the more recent graves look unkempt, burial chambers having collapsed, wooden and corrugated iron roof parts falling down. I have a weak spot for cemeteries, and enjoy wandering around for a while, in this case specifically enjoying the wide variety of graves, indeed from mausoleum to simple wooden marker, but that it not enough to come all the way to Nukus. 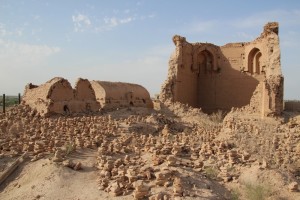 this is supposed to be the oldest mausoleum,or what is left, perhaps 12th Centry?

So why on earth did we come to Nukus? Because it has one other attraction, but what an attraction it is. Nukus has the museum! 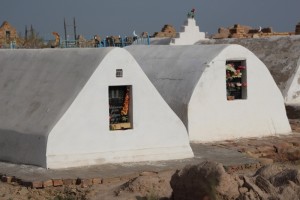 the variety of tombs is remarkable 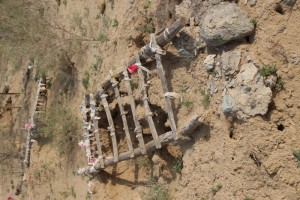 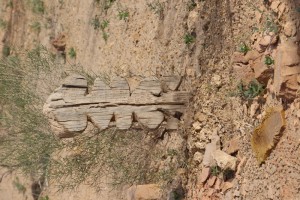 and the simplest of markings 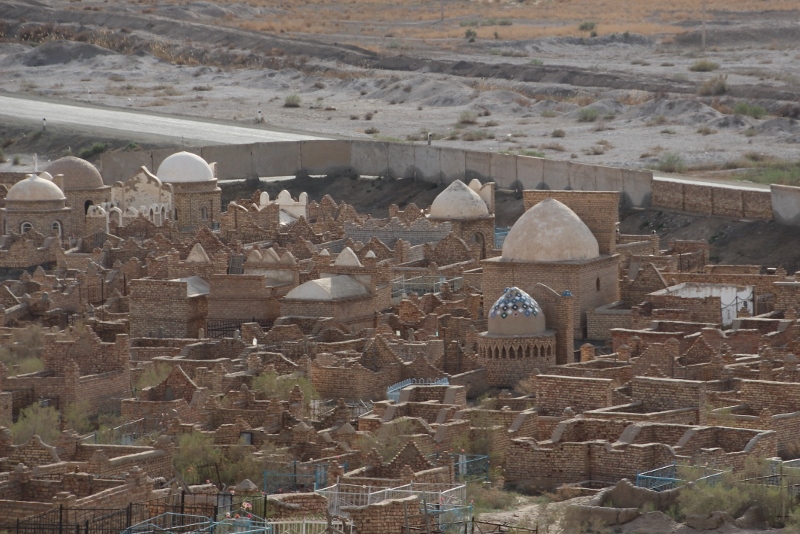 several tombs in the cemetery