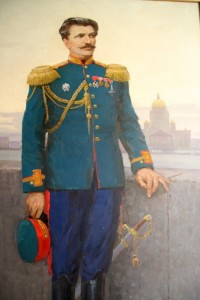 Near Karakol, we found a museum for the 19th Century Russian explorer Nicolai Przhevalsky

Those who have followed my other travelogues, or have inspected the various reading lists on this site, know about my fascination with early travellers and explorers, especially those of the 19th Century – ‘men of means and leisure’, quoting one of them. That fascination is, of course, largely limited to the English language domain. 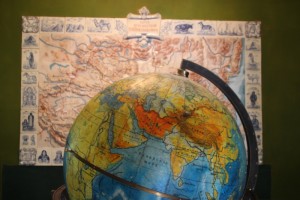 the globe, centred on Central Asia, and the 3D map with the Przhevalsky expeditions

So I never read any of the books Nicolai Przhevalsky wrote about his explorations, but I knew of Nicolai Przhevalsky. A Russian army officer, who was fascinated by unknown territory, and managed to convince the Russian Geographical Society to sponsor his travels – and the Russian army to grant him leave of absence, in exchange for all manner of strategic information Przhevalsky could gather on his travels. Which, coincidentally, concentrated on the ill-defined border areas between Imperial Russia and China, and those towards British India. Great Game, all over again. It remains unclear whether the man was foremost interested in exploring – his long-proclaimed, ultimately unfulfilled aim had been to reach Llhasa -, or foremost interested in military intelligence, a spy, in other words. But then again, many of the British explorers in this region at the time also seamlessly combined the two interests. He was also convinced of the Russian supremacy over any of the Asiatic peoples he came across (incidentally, also not unlike the prevailing European thoughts at the time), and one of his most famous statements was that ‘only three things were necessary for success of long and dangerous journeys in Central Asia, money, a gun and a whip’. How times have changed: we are having a pretty successful trip, and we just carry a bit of cash. 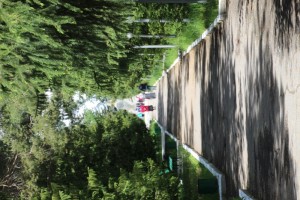 the path towwards the museum and the monument in honour Przhevalsky and the monument itself, a piece of rock, really 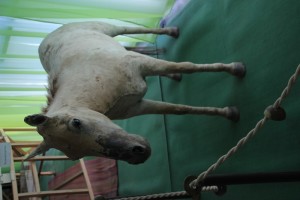 the Przhevalsky horse, a stuffed version, in the museum

It so happened that Przhevalsky died in Karakol, less than 50 years old, from typhoid caught from drinking polluted water, and was, conform his wish, buried here. And as a celebrated explorer, he was honoured with a museum halfway last century. Reason enough to visit the place.

On the one hand, you could discard the museum as a really small, somewhat chaotic collection of bits and pieces, adorned with the compulsory stuffed animals that every museum seems to need, here – including a stuffed version of the Przhevalsky horse, a short-legged horse discovered by and named after the explorer -, but on closer inspection there is quite a bit to treasure, including old photos, and some beautiful line drawings of the places that have been explored. There is even some English language explanation, although most of it is in Russian of Kyrgyz. Enough to entertain someone who is fascinated by explorers.