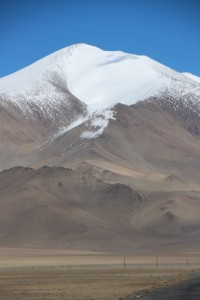 this is the sceneray along the Pamir Highway

Our first stretch on the Pamir Highway takes us from green yurt-strewn valleys in Kyrgyzstan over high, desolate and windswept mountain passes, to the turqoise Karakul Lake in Tajikistan

The Pamir Highway, connecting Osh in Kyrgyzstan with Khorog, and ultimately Dushanbe, in Tajikistan, was built in the 1930s by the Soviet military, across some of the highest country on earth: the Pamirs are often referred to as ‘The Roof of the World’ (although that same epitaph has been assigned to Tibet, too), and the road crosses a number of significant high altitude passes.

Any ideas about the western concept of a highway need to be buried right here and now: the Pamir Highway is high, but has nothing to do with four lane motorways as we know them. Two lanes is the maximum, and often the road is quite a lot narrower than that; large parts are gravel-only, haven’t been sealed, and where there is tarmac, it is often badly potholed, or torn up by trucks. Not a comfortable ride. But all of that (and a lot more), we take for granted, because there are not many travel experiences more spectacular than driving the Pamir Highway. 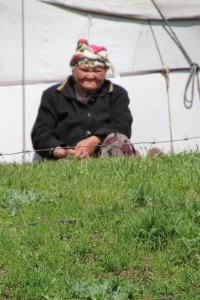 older lady in front of her yurt 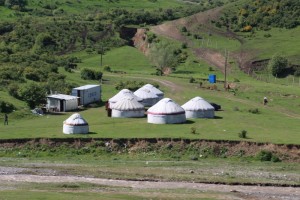 yurts in the valley that leads to the Chilyrchyk Pass 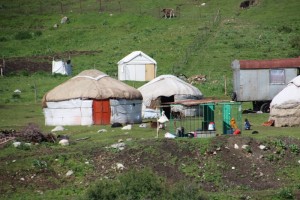 The first leg goes from Osh to Karakul, just across the Tajik border. Osh is at around 1000 m altitude, Karakul a little over 3900, so we have some climbing to do. Initially, we ascend to the Chilyrchyk pass, still in Kyrgyzstan, which is at a humble 2389 m an oasis of green – something we didn’t appreciate so much at the time! The valley that leads to the pass, on the north side of the mountains, is just being populated again for the summer, and yurts go up everywhere. This is where the sheep, the cattle and the horses will be grazing from May to September, and many have arrived already, although we do meet several herds on the road, too. 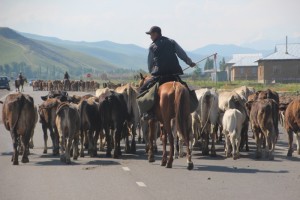 herds along the road, on their way to summer pastures 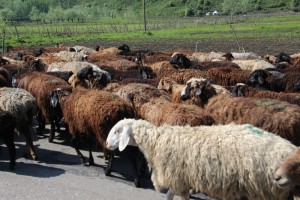 On the other side of the pass the road initially follows the Gulcha River. This area is more densely populated, here are the permanent villages, where people and animals retreat in the winter. Occasionally the valley narrows, and we drive amongst steep mountain sides which do not allow for a lot of views, but soon we climb again, the valley broadens out again, providing brilliant snow landscapes with high peaks on all sides. The last part are some steep hairpins, that lead to the Taldyk Pass, at 3615 m, and a little further, after a saddle in the mountains, to the Forty-Let (?) Pass at 3550. Once again, or rather, still, snowy peaks surround us. (I have tried to capture this in photos, but you need to realise that this is only a substandard replacement for the real thing, the wide landscapes all around you are impossible to translate to a small, or even a large screen.) 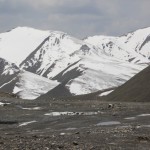 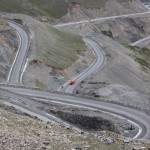 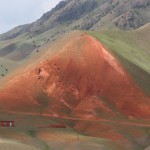 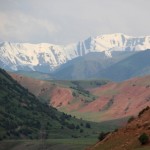 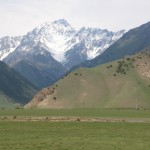 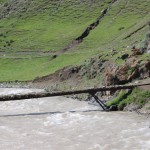 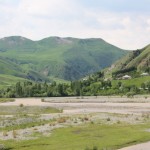 From the double-pass the road descends to Sary Tash, a border town – which really looks like a border town – from where the road splits left to China, and right to Tajikistan. Unfortunately, the weather has been closing in, and heavy clouds prevent the view over one of the highest peaks in the Pamirs, 7135 m high Pik Lenin (now officially called Koh-i-Garmo, but everybody still calls it by its old name – by the way, there are plenty of other good old Soviet-name peaks around here, like Revolution Peak at 6940 m, and the highest of all, Pik Kommunizma, which was the highest point in the former Soviet Union at 7495 m). 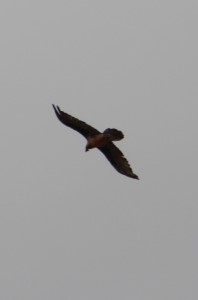 So far we have enjoyed a rather good road surface, by past Sary Tash the road deteriorates, all the way to the Tajik border – and then it gets even worse! The border crossing is a lengthy affair, and I don’t know why, because our driver took care of all the formalities. We need to pass customs, passport control, drugs control (really, a separate section), and then the military, and all of this takes well over an hour, without any official ever looking at us, or our luggage! And it is not that it was busy, at the border post, there was just one other vehicle, coming the other way. It was very cold at the border, but I still got out of the car, to try to take some pictures of a large bird of prey – I have learned long ago not to take pictures of border posts. Despite this, a soldier, very friendly, came to remind me to put my camera away; never mind that the dashboard camera of our car was happily recording each and every move, and each and every simple brick building of the border post (but not the eagle). 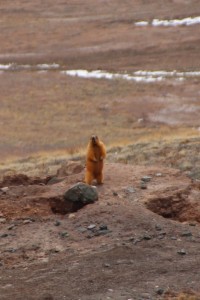 the one lively thing in these mountains are the marmots

Between the Kyrgyz and the Tajik border is some 20 km of no-man’s land. The actual border is at the Kyzyl-Art Pass, 4282 m, to which we slowly climb; obviously, no-man’s land also means no man to maintain the road, which is gravel, and in rather poor condition. We now start to appreciate the green valleys in Kyrgyzstan again, as around us there is absolutely nothing anymore, just bare rocks and further snow-covered peaks. And yet, we also pass an old road maintenance complex, dis-used as such (as to which the road testifies), but occupied by some people, who apparently live here, with their animals. 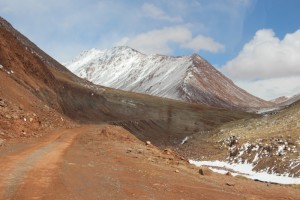 the Kyzil-Art Pass, the border between Kyrgyzstan and Tajikistan

The pass itself is an even colder affair than down at customs, thanks to a strong wind blowing, but we have to get out, of course, to take in the landscape all around. Desolate nothingness. Strikingly impressive. 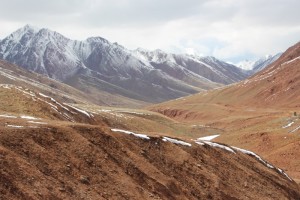 another view of the pass, totally desolate landscape 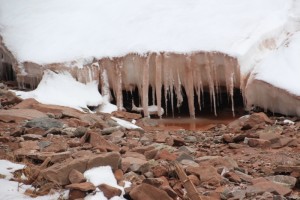 plenty of ice, too, at the pass 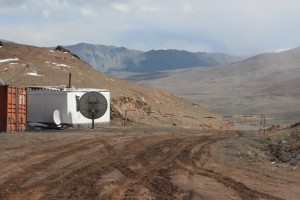 a sneaky photo of the Tajik border, at which we have been looking for an hour or so

At the Tajik border we repeat the sequence, in reverse, which also takes an hour, for no apparent reason, without us ever seeing any of the officials. Maybe we just miss out on tea? 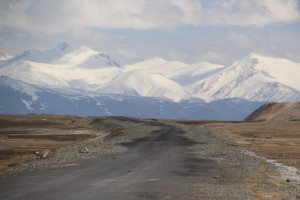 the Pamir Highway, this is what it looks like

Soon after we continue again, and across another pass, the Uy Buloq Pass at 4232 m, we spot the Karakul Lake, created some 10 million years ago by a meteorite. For the first time we see some bright colours again, the turquoise, green and blue of the lake in the changing sunlight. But the area around the lake is just desert, a sandy expanse where the occasional yak still seems to find something to eat. Our target for the night is the village of Karakul, situated at the lake shore. Which we reach just before a sandstorm hits the village. 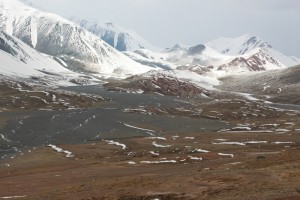 landscape itself does not become more lively, even on the other side of the pass 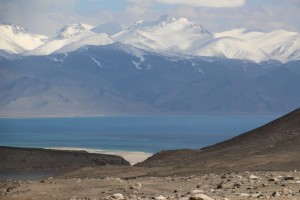 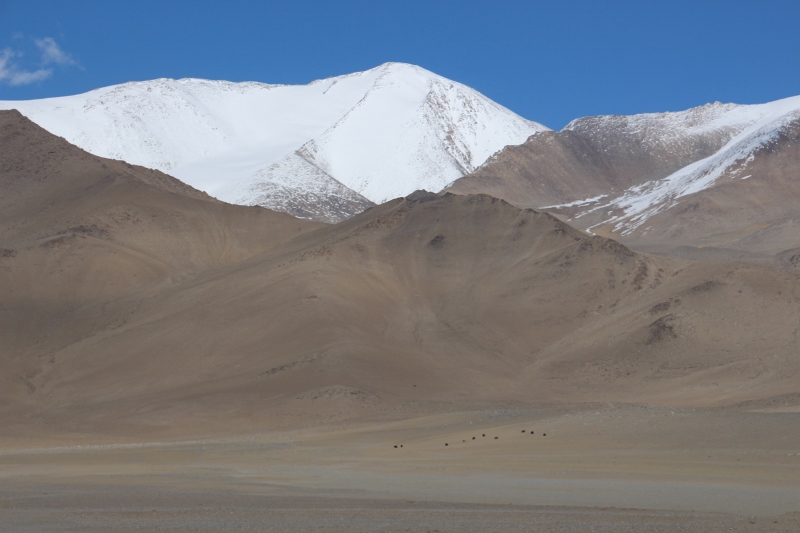 the desert around the lake, with some distant animals – yak – still surviving