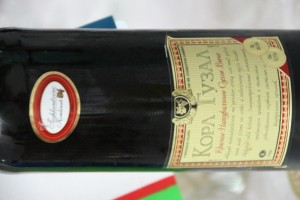 the Kora Guzel, or Black Beautiful, the best of the wine tasting lot

What I didn’t know, Uzbekistan actually produces several wines, some of which we tasted.

The one thing that keeps surprising me is the near-universal production of wine. Almost every country seems to make some of it, seemingly regardless of climate, or religion. My first confrontation – which it was – was with Dodoma Red in Tanzania, of all places, and since then I have had locally produced wine in such unlikely places as India, Ethiopia and even Cambodia.

So I should have expected Uzbekistan, despite being a Muslim country, to produce its own wine, why not? Already on our first day, in Nukus, we discovered some home-grown wine (which we bought, and a week later poured through the sink shortly after opening). Yet, in a Khivan restaurant we were pleasantly surprised by a local dry red wine, which was quite drinkable. 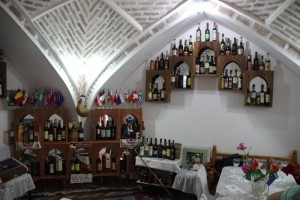 the wine tasting room, with eight bottles ready to try

So sure enough, when we found the wine tasting cave in Bukhara, in a tiny corner of a disused caravanserai, we had to try. An older couple, obviously knowledgeable about wine, received us, put a Dutch and Ukrainian flag on the table – they apologised that they didn’t have an Argentinian one -, together with a couple of glasses, and some biscuits. No bucket, wasting precious wine by spitting it out, that is unheard of, of course.

I won’t discuss the eight different wines in detail. There were two dry whites, both from the Surhan area, the border area with Afghanistan in the south of the country (this was also where our Khivan dry red came from). Madam tried to convince us that the taste was that of apples, but to me, apple vinegar came closer. The three dry reds that followed weren’t much better, tasted a little dusty. The best one was the Kora Guzel – the black beautiful -, closely followed by the Ramsjurja Sarkent – the pearl of Sarkent -, both from near Tashkent. The latter had won two gold medals, one of which came from Yalta Crimea Ukraine, oh no, Yalta Crimea Russia.

Asked if wine drinking wasn’t in contradiction to the Muslim beliefs, madam explained that spirits, that was bad, indeed, but wine came from grapes that naturally fermented, so that was OK. Pressed on the issue, after she also offered us a cognac tasting – “and what about cognac?” -, she became slightly irritated: why I didn’t understand that cognac comes from wine, which comes naturally from grapes, so that, too, was OK. 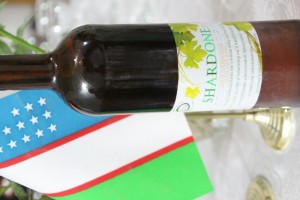 a Shardone, from Chardonay grapes 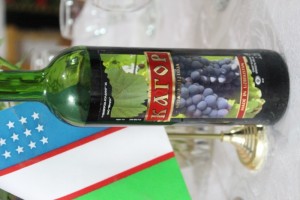 and the sweet red Kagor (practice your cyrillic), made as in the Cahors

We finished off with a half-dry white, a true Shardone, a half-sweet red (what is the difference between half-dry and half-sweet?), and a sweet red, the latter having been produced according to French technique, or so she told us. The wine, a Kagor, did not particularly resemble a French Cahors, but was, in fact, not bad at all. Most surprising of all, of course, is that these wines come from the Bukhara region itself, pretty much a desert climate. But then, I told you already, I have been surprised before…

Altogether not such great wines, but great experience!