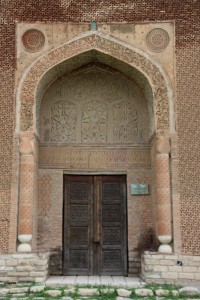 the nicest, most authentic mausoleum in Uzgun

Uzgun sports a minaret and some old mausoleums, and a very friendly atmosphere, and is well worth the trip from Osh 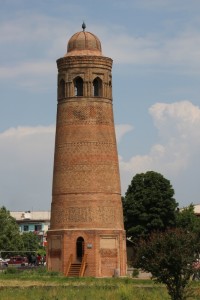 Having already seen most of Osh, we had a day spare, which we used to drive to nearby Uzgun, a town with a series of three 10th-11th Century mausoleums. Of interest because of the intricate brickwork that was used in those days as decoration, well before the blue-coloured tiles became the norm. Perhaps because of the mausoleums, Uzgun receives quite a lot of pilgrims, and is a notably more religious town than we have seen so far, with a large number of mosques, and many women covered. 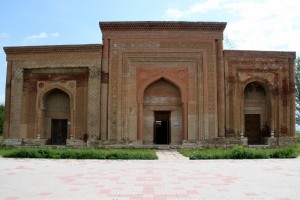 the three mausoleums, in various states of repair 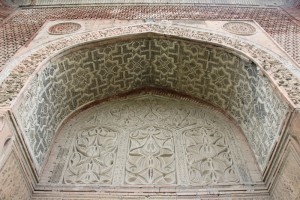 the attraction here is the intricate brickwork, from the time before coloured tiles 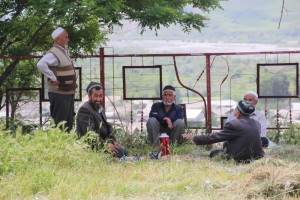 the old men of town come together every week, to commemorate long dead frieds

At the mausoleums, a group of men was having a picnic, and with a big grin invited us to join, at least for a cup of tea. They explained that they were remembering a comrade, and that they do this every year; what a nice idea. They also insisted that I take a couple of pictures, to which I, naturally, obliged. Great faces! 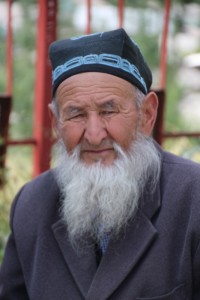 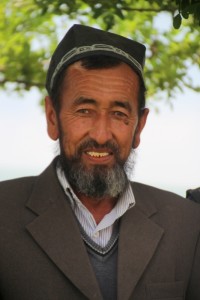 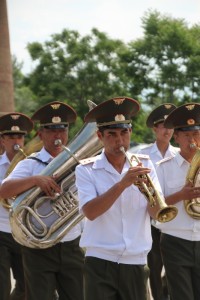 It happened to be some celebration day, and the military band was out with a squadron or two, to put up a show in the main square. Very young soldiers, all of them, who did their best to come across as fearsome, yet the show was stolen by two kids letting a couple of doves escape. How tacky can you get, but the public loved it, a bit – many are ethnic Uzbeks, here, and I suppose the army is predominantly Kyrgyz. 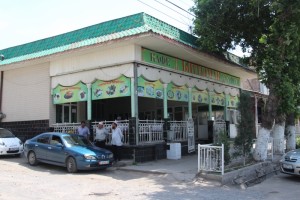 and this in one of the best restaurants in Osh, packed at lunchtime

In the afternoon I decided that I would be able to see the Pamirs better if I would have a haircut first. I located a hairdresser, took a seat in her 20 ft container, and let faith control the rest. What can I say? As with so many things in ex-Soviet republics, efficiency trumps aesthetics. I now understand much better why Kyrgyz man are wearing these traditional hats on their heads, I am seriously considering buying one myself. And I will most certainly not post many photos of me anymore, this blog!