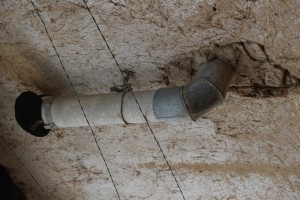 a chimney in the old town of tashkent, no doubt post-dating the time of Osipov

A bit if general history on Turkestan and Tashkent, and the remarkable, if short-lived, coup d’etat of one K.P.Osipov

As I have mentioned earlier, much of Turkestan, the name by which Central Asia was known before the Soviets introduced the current names of the Republics, had already been subjugated to Russian, Tsarist rule in the 19th Century. This was the time the Russians expanded east and southeast, with the ultimate objective to threaten the British Empire in India – a kind of an early Cold War dubbed the Great Game. This had been concluded with a treaty at the end of that same century, the treaty that created the strange North-eastern pan handle of Afghanistan as the buffer zone between the then-British and then-Russian Empires. Subsequently, Britain and Russia found themselves at the same side in the 1st World War, until the Russians suddenly withdrew from the battle against the Central Powers, mainly Germany, Austro-Hungary and Turkey, because of the Bolshevik revolution at home in 1917. Russia was suddenly fighting a civil war, where the so-called White Russians, loyal to the Tsar, were battling the Red Army of the Bolsheviks, and this extended into Turkestan, of which Tashkent was the Bolsheviks bulwark. 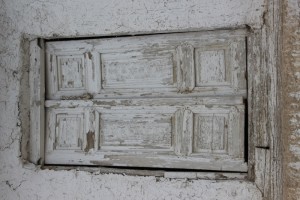 a door in the old town, which may well be from Osipov’s time

Except that the population mix in Turkestan was a far more explosive one than elsewhere, with perhaps 1.5 million Russians dominating some 15 million Muslims, who had understood that Lenin was encouraging them to throw off the imperial yoke – only to realise that Lenin only referred to the Indians in India, not his own ethnically different, and discriminated subjects. Blend in 40,000 prisoners of war, mostly Austrians and Hungarians, who lived in increasingly squalid circumstances and had no way to return home, yet were trained fighters coveted as mercenaries by both White Russians and Bolsheviks, and the scene is set for some interesting local politics. 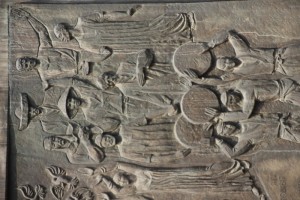 above the metro entrance, frieze of good socialist ethos

Tashkent was a pretty dangerous place, in those days. The Bolsheviks had done away with the previously governing elite, and had promoted train drivers, factory workers and farm hands to run the town, and in fact the whole region, not hampered by any experience, knowledge or tact. Execution of prisoners was the norm, and just the appearance of being an enemy of the system was sufficient to land in jail. A potential Muslim uprising in the now-Tajik city of Kojand was bloodily suppressed in January 1918, by a combined force of Bolsheviks and POWs that plundered every house, raped every woman and then burned down the city. 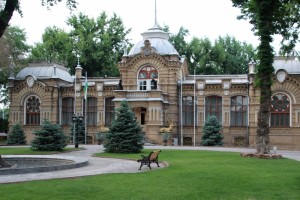 this is definitely pre-Bolshevist, the Romanov villa belonging to a cousin of the Tsar, and the only old building outside the old town

In this atmosphere of fear and incompetence stood up K.P.Osipov, a young Bolshevik Commissar who managed to convince the White Russians that he was on their side. On 6 January, 1919, he then initiated a coup by calling the other Commissars one by one to the barracks where he was stationed, with the story that he had a mutiny on his hands. Unsuspecting, the Commissars came to his rescue, only to be shot on sight. Having rid himself of the Bolsheviks elite, if I may call it that, Osipov declared himself ruler of Turkestan, supported by the White Russians. However, he had underestimated the strength of the Bolsheviks, who fought back and recaptured much of the town of Tashkent within two days of the coup. Osipov, realising that things turned against him, walked into the central bank, forced the clerk at gun point to hand him several millions of roubles, and disappeared with a few followers in the direction of Bukhara, never to be seen or heard of again. Pretty gruesome, but also pretty effective, for an opportunist, whose rule certainly must have been one of the shortest, yet lucrative in history. Hardly the work of a drunk, as he is consistently being depicted by Soviet historians, as well as the artist who created a painting of the coup, now hanging in the Tashkent Museum. Which, unfortunately, is closed on Tuesdays, the only day we were in town. 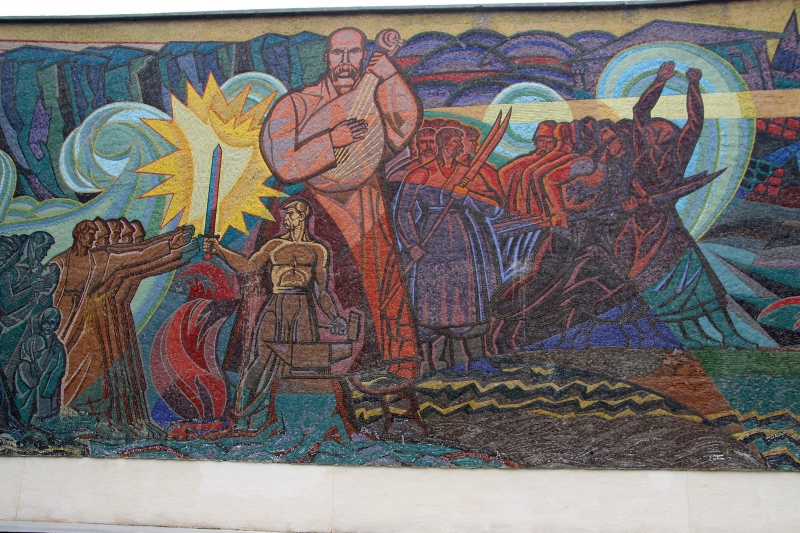 another good socialist scene, decoration on the side of a building to uplift the people’s spirit!

2 Responses to 15. the opportunist