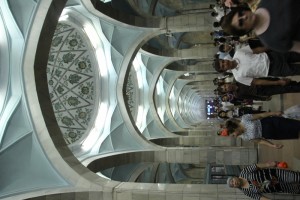 inside one of the metro stations of Tashkent

The Uzbek capital is mostly big and ugly, although the old town and the Chorsu Bazaar add some couleur local

I recently learnt that Tashkent had been the fourth largest city in the former Soviet Union (after Moscow, St. Petersburg and Kiev). Today I actually realised what that means. Tashkent is huge, with wide avenues and enormous parks, once again lots of green. Walking it takes some stamina! Yet that is precisely what we did on our first afternoon.

Incidentally, there is no need to walk in Tashkent. Quite a few official taxis cruise the streets, and every other saloon car seems to serve as a taxi, too. You can just about hail every car, and pay seldom more than 1-2 US$ for a trip in the city. Not much future for Uber here. There are busses, trams, trolley busses, and then there is the metro, four intersecting lines, every five minutes a train. But to appreciate Tashkent’s size, you have to walk at least part of the city. 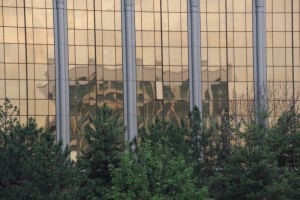 mirroring windows of a government building 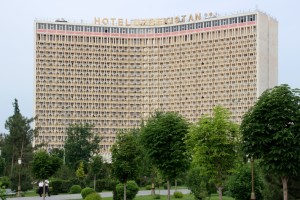 Nothing is really beautiful, here (although some claim that some metro stations are – we haven’t seen them all, and in any case I couldn’t show you, because one is not allowed to take photos inside, part of standard police state paranoia). The government buildings are your average Soviet-style, large and concrete, with dark-blue or gold coloured mirroring windows, the apartment buildings the average palati-style, 4-5 floors only (with no lift), with closed-in balconies to create an extra room – although so once in a while efforts have been made to cheer up the buildings, either by using extra concrete to vary the outline of windows, or by having the sides of the palatis decorated. Remarkably little high-rise, in fact, I think the monstrous Hotel Uzbekistan is probably the tallest building in town, and is one of the very few. Parks are enormous, and there are many of them, Tashkent is quite a green city in that respect. But there is nothing really beautiful, here, not even the man on the horse in the middle of Amir Timur square. Just impressively big. 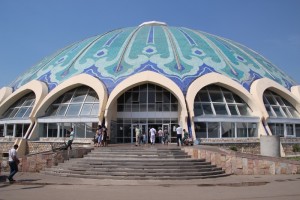 A case in point in the Chorsu Bazaar, the biggest market in town. We have seen many markets on our travels, but never something so well organised as this one. Almost all of it inside, in purpose-built halls. The central hall contains meat, cheese, dairy, all stuff that benefits from cooling, and cooling there is, in neat vitrines set up in large circles. The fresh products, fruit and vegetables, are in a neighbouring hall, once again stalls in rows, trying to keep some structure in what is being sold where. At one end, the bread, coming straight from a set of enormous stone ovens, on the other end, behind the rice section where hundreds of rice sellers stand next to each other selling nothing but rice, are the spices, in small buckets, or in huge sacks, colourfully displayed. Other buildings hold clothing, shoes, plastics – on first inspection mostly imported from China and India, it looks, doing honour to the old Silk Road once again! But once more, the bazaar is not particularly beautiful, just impressive from its size and organisation. And its cleanliness, not to forget! 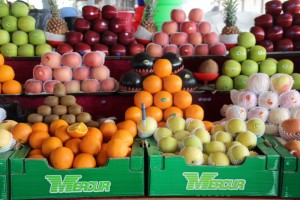 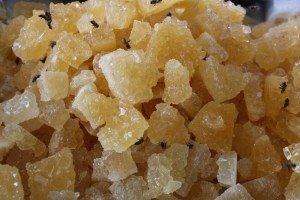 sugar chrystals, eaten as sweets (also by the wasps) 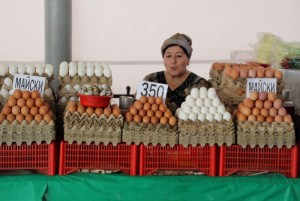 the eggs lady, one of many, in fact 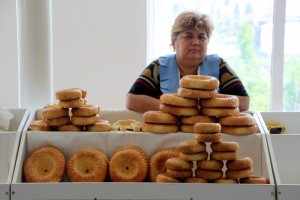 the bread lady, one of even more 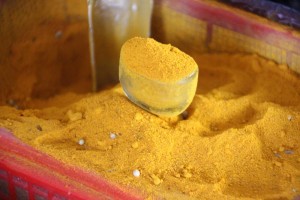 the spice department, well, a very small part of it 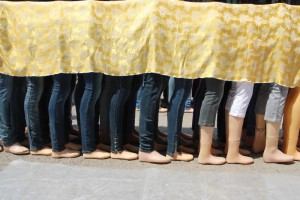 not all of what is sold, is food stuff! 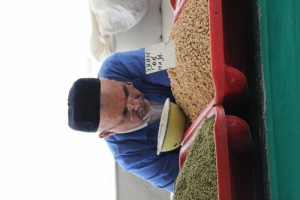 rice seller in the Bazaar 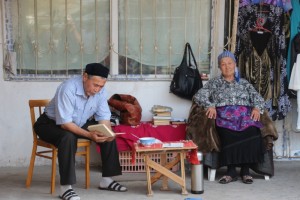 It has not always been the case. Tashkent was already a trading town on the Silk Road thousands of years ago, and later, like others, was a Khanate that vied for dominance with Samarkand and Bukhara, and with Kojand in the east. Also like the others, in the 19th Century it was absorbed in the Russian empire, and subsequently more or less smoothly into the Soviet empire (but see my entry on The Opportunist). But little remains, as an earthquake in 1966 flattened much of the city, and was used as pretext to demolish everything else, too, and build a model Soviet city instead. Tashkent today. Except that Soviet funding is no more, and bits and pieces begin to fall apart, without being repaired. Which gives the whole lot a bit of a shoddy appearance on closer inspection. Which doesn’t bode well for the future. 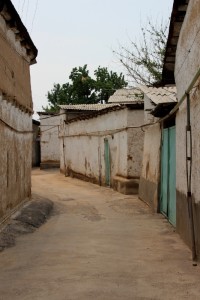 street in the old town of Tashkent 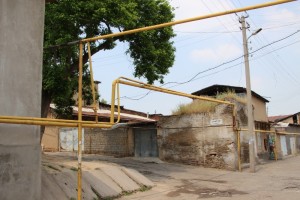 and the intricate gas supply system, locally raised to allow cars to pass

Ironically, the part that survived the earthquake, and also now seems better maintained that the impressive centre of the city, is the Old Town, a maze a streets in between mostly mud-walled houses. Apparently, especially the walls devoid of doors and windows withstood the 1966 tremors, without any problem. There are a few historical buildings in this area, too, nothing remotely comparable to Samarkand and Bukhara, but because of their location in Tashkent, important gathering places for the local people. The Old Town itself is mostly frustrating for those who don’t know it – like us -, as most narrow streets turn out to be a dead end, after having turned several corners. As in so many other Uzbek towns, the gas supply system runs outside the houses, through an intricate network of yellow pipes, then bent upwards at intersections to allow trucks to pass. But this system is also aging, and on more than one occasion in the Old Town we noted the distinct smell of gas; an explosion one day could do more damage to these walls than an earthquake! 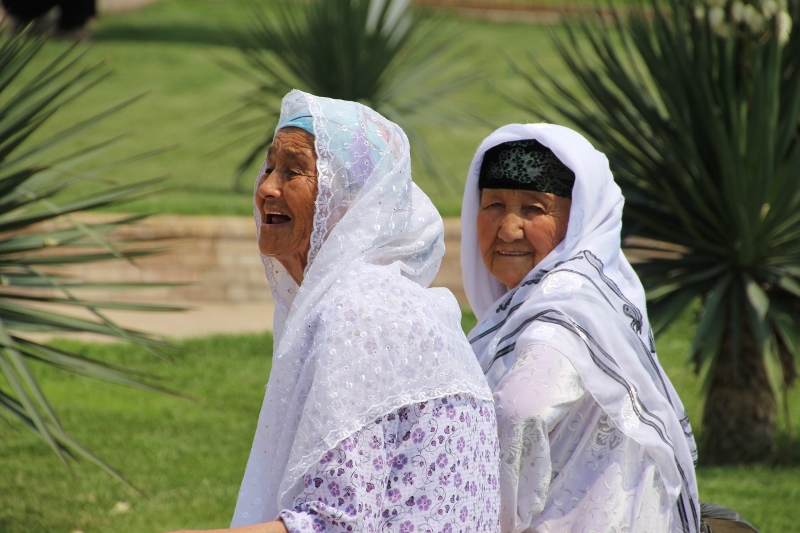 two ladies on their way to a local shrine