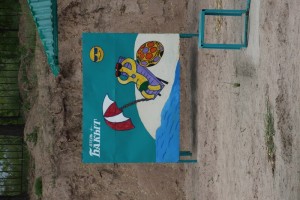 the beach in Cholpon-Ata could be a funny place, in season

The prime tourist attraction in Kyrgyzstan is the Issyk-Kol Lake, a large, slightly saline body of water in the Tien Shan Mountains. Issyk-Kol means warm lake, on account of a water temperature – at some 1600 m altitude, the lake nevertheless never freezes over- although ‘warm’ is perhaps not the first impression that comes to me, feeling the water. And the main resort town on the lake is Cholpon-Ata. 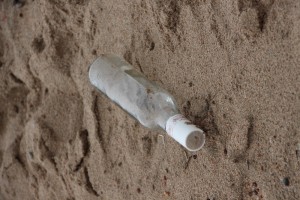 one assumes this is a remnant of last season, perhaps?

What we didn’t know, of course, is that the resort season is really very short, July-August, if at all, and when we arrived, mid-May, it was definitely not the season. The bus dropped us somewhere in town, after which we spent an hour or so, with our suitcases in tow, looking for a place to stay. At one time, a man offered us his bed & breakfast, but this was so far out of town, that it would have become a prison to us, without transport – and besides, we had the strong impression that his wife was not at all enthusiastic about the idea of having guests -, so he dropped us back in the centre, 20 minutes later. To cut a long story short, we ultimately found a guesthouse that hadn’t opened yet, but was willing to offer us accommodation, nevertheless. Very friendly, very helpful, but we did need to make our own beds, and clean the room somewhat, which may not have been cleaned since last September’s end of the season! But, he, we did have a roof, a bed and even hot water for a shower.

Next challenge was to find some food: luckily, one restaurant in town was open, serving the standard Kyrgyz fare of lagman – a noodle soup with some veggies and a little meat. Even better, the town’s supermarket was open, for the necessary supplies. Contrary to my earlier assessment that Kyrgyzstan does not produce its own wine, I was mistaken. They do, and thus did we – foolhardily – have to try. Wrong decision. From now on we will stick to imported Georgian and Moldovan wines only! (We found out that they also produce a Calvados, in Kyrgyzstan, which – even foolhardier – we also tried, after all, with ‘trois etoiles’, you can’t go wrong, no?; mistake, you can.) 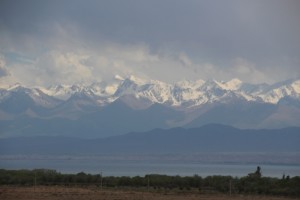 We had to check out the lake shore, of course, next day. A short walk brought us to the beach, which was totally deserted. Again, it looked that nobody had been here since the facilities had been boarded up, in September last year. Mind you, in summer, this could be a quite attractive place, nice sandy beach, communal changing rooms, food stalls, play grounds, even a jetty stretching out into the lake, which is on all sides surrounded by snow-capped mountains, a spectacular sight. But for now, the feeling of total abandon dominates, with rubbish and animal faeces strung around, and no mountain view is going to compensate for that. 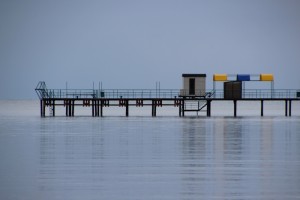 the jetty streching far into the lake the beach facilities are all boarded up, literally 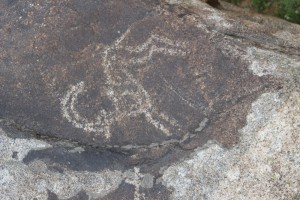 this is the most common theme, a long-horned ibex 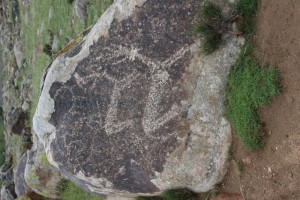 and another engraving, two unidentified animals 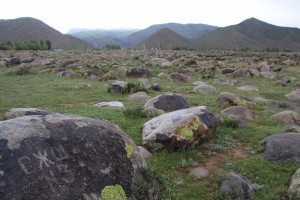 the boulder-strewn field full of petroglyphs

Luckily, Cholpon-Ata has another claim to fame, its petroglyphs – ancient rock engravings – just outside town. One can walk there, but given the overall gloom hanging over town, and the unreliable weather, we convinced a taxi driver to take us. The site, once again dramatically positioned with a backdrop of snowy peaks, is in fact a huge fenced-off field, strewn with boulders, on some of which various animal and hunting scenes have been carved. Apparently, they date from 8th C BC to 1st C AD, and also from 5th-10th C AD, and some even as recent as 15th Century – which I find highly unlikely, especially because the subject matter appears all very mono-thematic: although small sign boards claim scenes of goats, hunters, camel caravans and what else, we mostly recognised long-horned ibexes. And graffiti, of course. Somewhat disappointing, I would say, but this may also have been the result of a well-meant, but potentially disastrous attempt of some years ago to protect the engravings with chemicals. Which may be the reason one cannot see that much anymore… 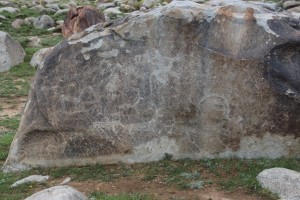 another set of engravings, slightly more varied than the usual 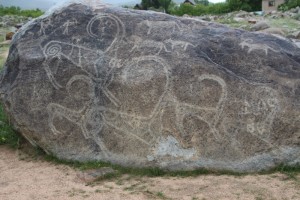 the most expressive rock engravings, right at the entrance of the field 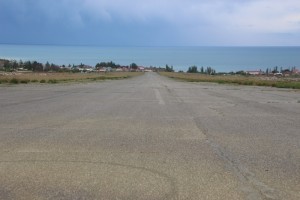 the road back to town…

Our taxi driver decided, on the way back, not to bother with the tortuous road we took up, but use the airport runway instead – which was marginally better surfaced than the road. 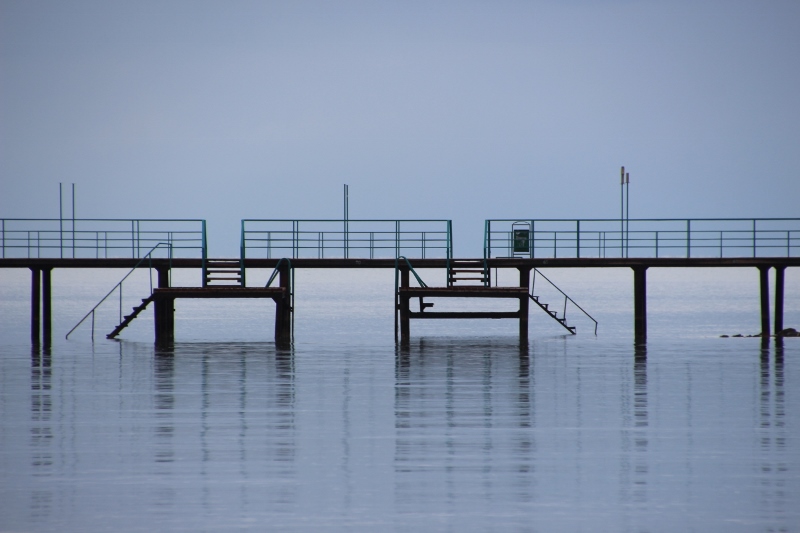 another view of the jetty 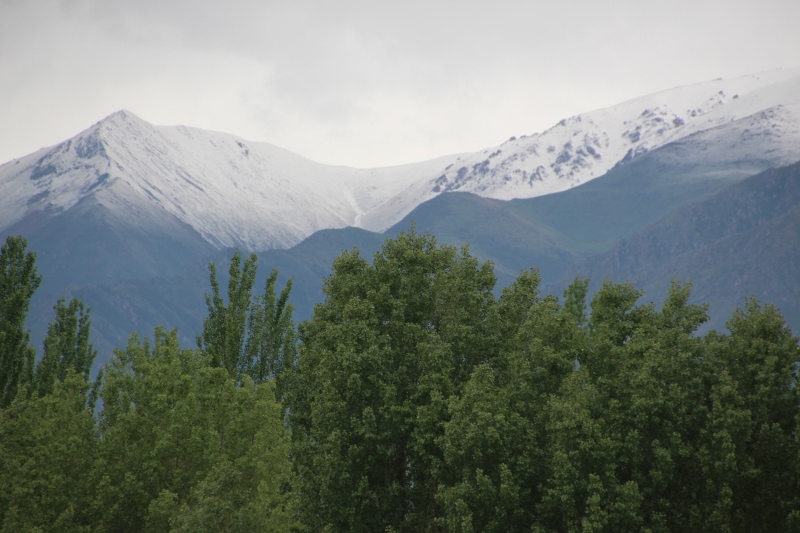 the backdrop to the petroglyphs field