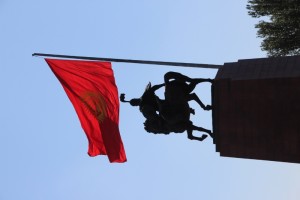 the Erkindik Monument in the centre of Bishkek

Pleasant but slowly dilapidating small-town capital of Kyrgyzstan holds a unexpected, and un-apologetic, shrine to Lenin in its museum 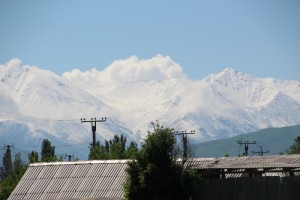 the Ala-Too mountains south of Bishkek, and clearly visible from town

In Osh we encountered our first set-back. We had planned to cross Kyrgyzstan from west to east, slowly, traveling from place to place, enjoying the landscape and a more rural setting, but apparently, the road, the only one, is closed – or broken, or impassable, we never learned what the exact problem was (that old language barrier again, you know). So we took a plane, and flew to Bishkek, the Kyrgyz capital. 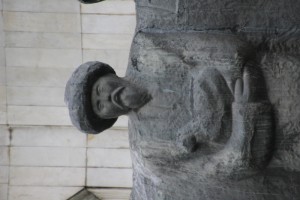 yet another monument, this is detail of the so-called Friendship Monument

I suppose first impressions count for much when you get to a new place, and with rain pouring down the evening we arrived, as well as the next day, our first impression wasn’t great. As in many other cities we have been to so far this trip, Bishkek is also falling apart: some of the roads on the way in have enormous potholes, the many parks could do with some maintenance, cutting the grass for starters, and pavements need urgent repairs – especially obvious when it rains heavily! The centre is around the Alo-Too square, a for Soviet standards humble open place where Kyrgyzstan’s rallies take place, close to what is called the White House, a monstrous seven story building that houses parliament and presidential offices. This was twice, in recent history, the scene where a revolution took place: first in 2005 to overthrow the regime of physics professor-turned- president Akayev, who became increasingly corrupt during his reign, and then again in 2010, when the initially clean, but – how often do we need to see this happening? – increasingly corrupt president Bakiyev and his family clan was thrown out. 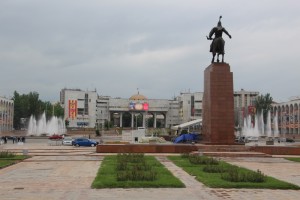 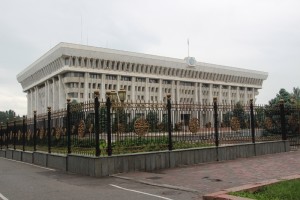 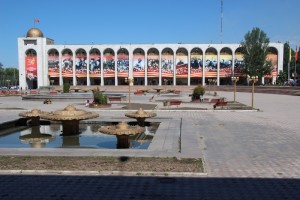 one side of Ala-Too Square, decorated with Victory Day propaganda 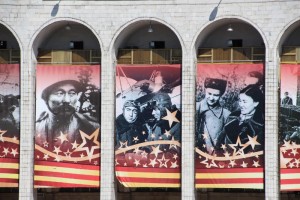 war images from everywhere, to pump up the good old nationalistic feelings again

On our second day the weather was better, and the town looked better, too. All over the former Soviet Union the 9th of May is being celebrated, Victory Day, the victory over Nazi Germany. In Russia itself this is being beefed up as a major nationalistic theme, but it is interesting to see that in the other, now independent former Soviet republics this is also still a big issue. We saw much of it in Uzbekistan, and here, too, even ten days later, the town is still decorated with red and yellow flags, and the Alo-Too square is plastered with propaganda related to this victory. And not only outside, inside too, in both the Fine Arts Museum and the State History Museum (where else do you go if it rains?), are special exhibitions on the Great Victory, with posters, paintings and photos. 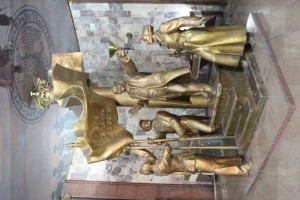 Lenin and comrades inside the State History Museum

However, what sets the State History Museum aside from all other museums in the world, is that it has still a whole floor dedicated to the memory of Lenin. More than in any other country, I believe, the man is still unapologetically being venerated here, and it shows in the museum. The ceilings are adorned with murals of the revolution – the Bolshevik one, not the more recent Kyrgyz ones – and in all corners a series of rather gross sculptures depict the victory of the proletariat over the bourgeoisie, sculptures that appear bronzes, but on closer inspection may well be clay (which of course is much more appropriate if you try to depict proletariat over bourgeoisie). Unfortunately, some parts had fallen off, but have been adjusted again with plastic sticky tape! There are also many vitrines, half of them empty, others filled with photos, obviously-read book – Lenin’s personal library, perhaps? -, paraphernalia, altogether quite chaotic, and no English text to enlighten us. It is forbidden to take pictures inside, but when I asked the woman selling tickets, she nodded over her mobile phone, which I took as a yes – whether she understood what I asked remains unclear, but the rest of the staff had gone off to lunch, so nobody stopped me. 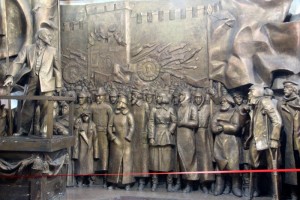 Lenin, once more, addressing the masses 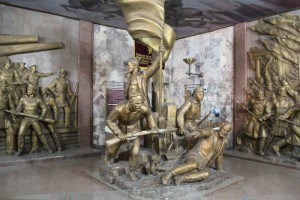 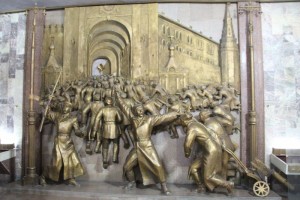 and the storming of the Bolshevik equivalent of the Bastille (note the machine gun on wheels, bottom-right) 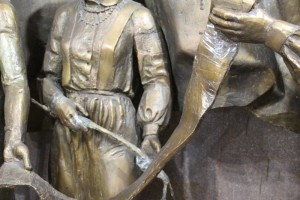 some peices have been taped back, provisionary repairs that haven’t passed the stage of provisionary yet (and never will) 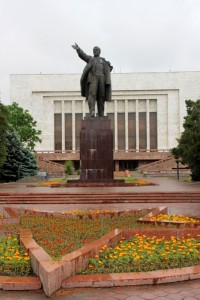 Lenin, outside the State History Museum 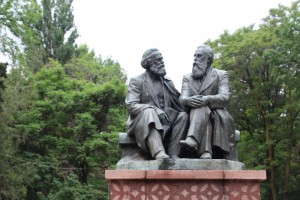 and Marx and Engles, casually discussing

Outside the State History Museum, another larger-than-life statue of Lenin, as well as a statue of Marx and Engels – where in the world do you still find this! And leafy boulevards, somewhat too big for the Bishkek traffic, which never really seems to accumulate into a traffic jam. A friendly town, village-like, almost, without real highlights, or it must be that in Bishkek we found our first real ice-coffee in a shopping mall. 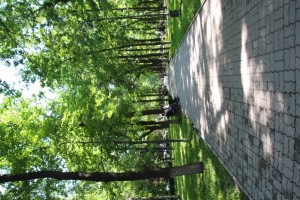 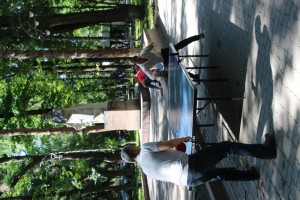 with multiple table tennis tables for entertainment of the masses 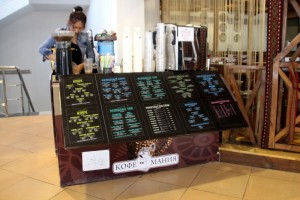 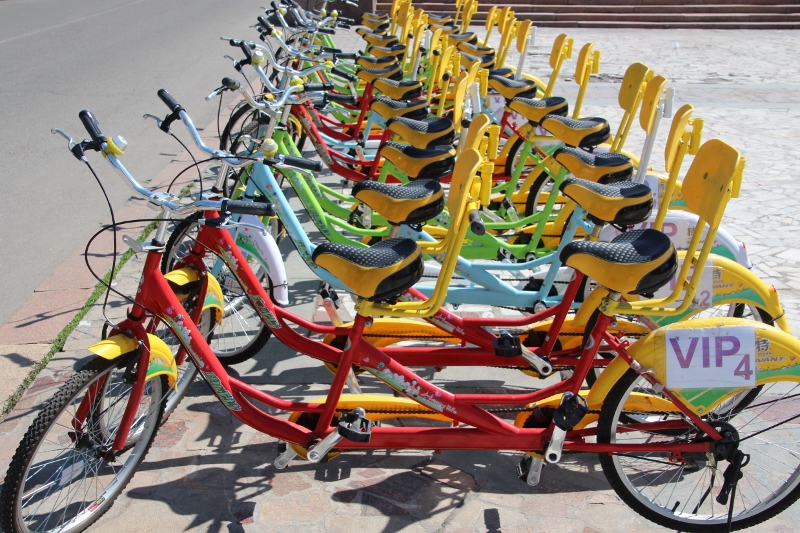 bicycles for rent on Alo-Too Square

One Response to 19. Bishkek