the Panj River, with Afghanistan on the other side, and Yamchum castle on the left 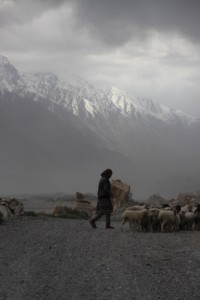 sheep on the road along the Panj River, Afghan mountains in the back

There are lots of ancient sites worth stopping for along the Panj River, the border between Tajikistan and Afghanistan 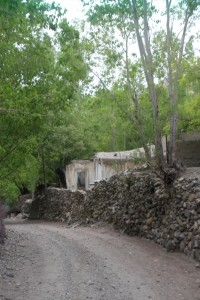 Langar, with gardens and tree-lined streets the greenest willage we have seen for a while

At the village of Langar the Pamir River, that formed the border with Afghanistan, empties into to much larger Panj River – which now becomes the border. The Panj ultimately turns into the Amu Darya which we have seen earlier in Uzbekistan, the Oxus of antiquity. Langar is quite different from what we have experienced so far; instead of the dry and bare, wind-swept plateau villages with their dusty streets in between small, mud-brick houses, here the streets are lined with trees, the houses surrounded by agricultural patches of land with all kinds of crops. The word ‘lush’ is perhaps too generous, but everything is relative, and it is quite a relief to see so much green again. 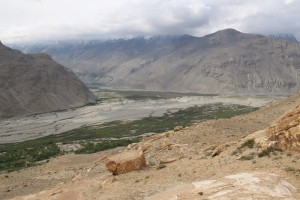 where the Pamir River joins the Panj River at valley level agriculture is being practised again, unlike in the High Pamirs 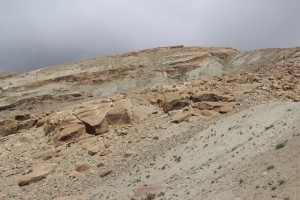 harder sandstone rock layers form the base for the petroglyphs 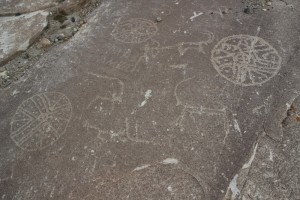 these are likely the original petroglyphs, not recently enhanced 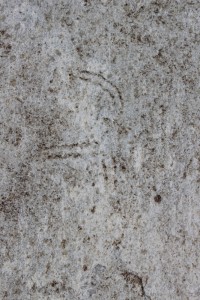 and this one, too, is original, if you can recognise the image 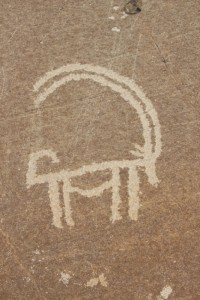 whilst this is a recent, even more stylilised addition 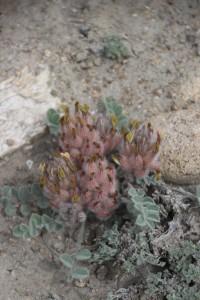 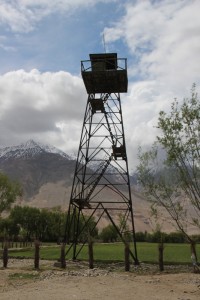 High above the village are, once again, petroglyphs, and this time we were not barred by snow reaching them. So one early morning I scrambled up the mountain scree, along a hardly discernible path, to the hard rock faces that were supposed to contain the images. They did, but unfortunately, many of them have been enhanced by local people trying to be ‘helpful’, who have scratched a bit more, and others have added new petroglyphs, or their names, or just random scratches, thereby thoroughly destroying this unique site. It is hard to identify original images, and those I found are all of ibexes, and the occasional hunter (I think). 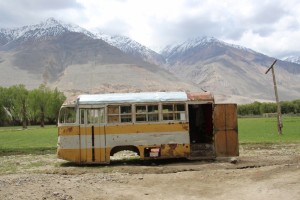 The drive along the Panj River dramatically illustrates the difference between the Eastern Pamirs and the Western Pamirs. Here, lots of agriculture on the river plains, helped by extensive irrigation, and on the lower slopes terraces have been constructed, too, around and in front of houses. The Tajik side is quite densely populated, village after village, and fairly prosperous, compared to what we have seen so far in the country. The opposite, Afghan side is a lot less developed, only the occasional hamlet on an alluvial fan, where some of the run-off water is being used to create a few patches of green. Striking. 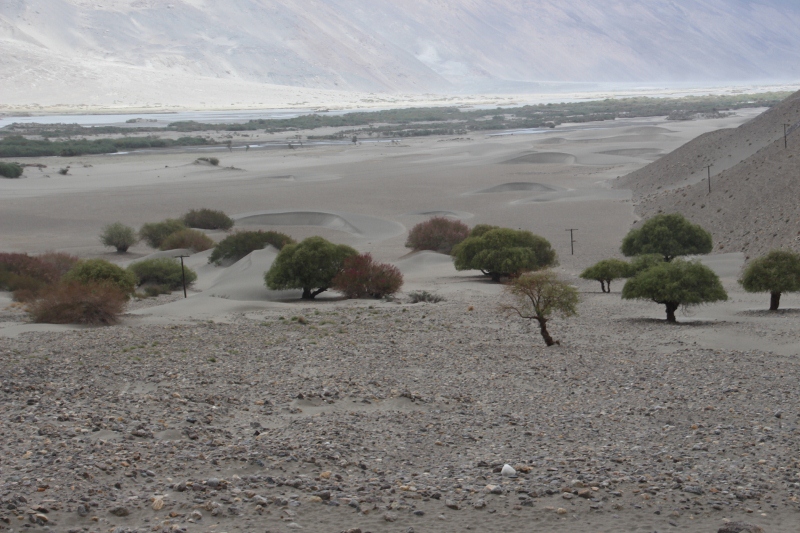 in places extensive dune landscapes have developed on the valley floor 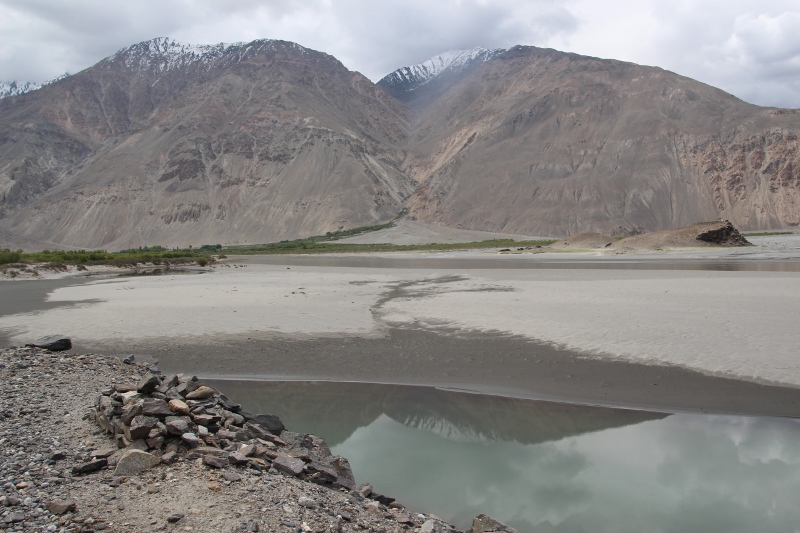 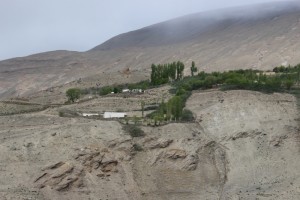 agriculture even along the slopes above the village 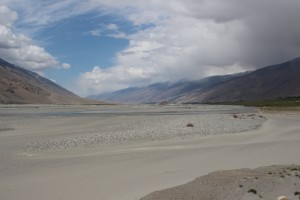 another view of the Panj River 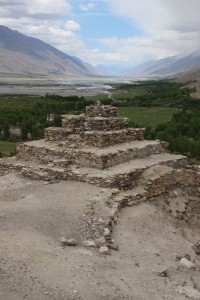 4th Century Buddhist stupa near the village of Vrang 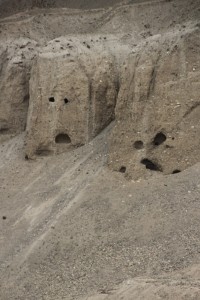 man-made Buddhist caves in the mountains near Vrang 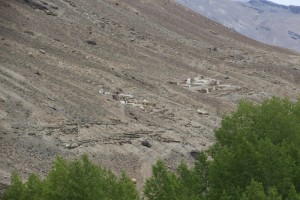 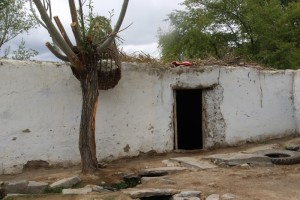 one of the houses in the village of Yamg 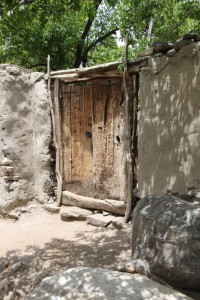 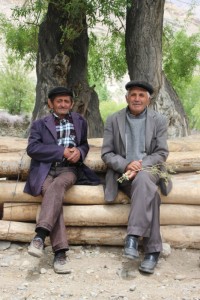 two of the inhabitants of Yamg 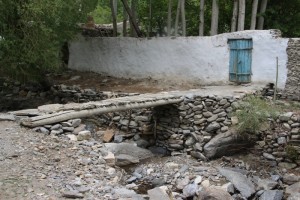 and another house, with bridge 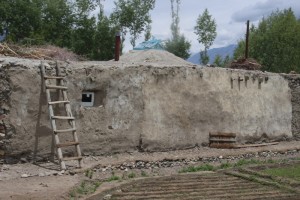 this is a typical Pamir house, with roof window 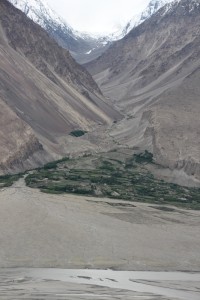 view of an Afghan alluvial fan, from the fortress 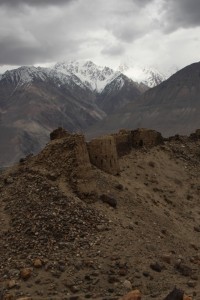 the dark remains of the Yamchum fortress 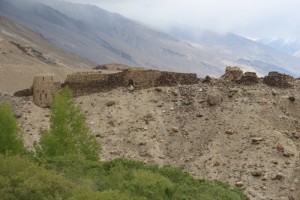 another view of the Yamchum fortress 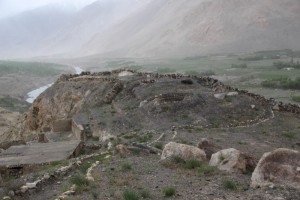 Along the way are a number of sites to visit, like a Buddhist stupa made of rocks near the village of Vrang. There are also traces of other build-up, now ruined, buildings here, and man-made caves in the conglomerates on the other side of the small valley. A number of castles, equally ruined, testify to the strategic value of the Wakhan Valley, already in the 3rd C AD; many of these castles have been used until even the post-Soviet era, by Russian border troops stationed here, but by now they are just ruins, nothing more. An interesting Muslim shrine to Ali, the son-in-law of the prophet Mahomet, tries to merge Zoroastrian beliefs, the four elements earth, water, air and fire, with a Bhuddist stupa-like structure and a shamanist offering plateau. Near the shrine is also the now-abandoned Khaka Kale, a 2nd or 3rd C fortress overlooking the river, and until recently used the Tajik army. In the village of Yamg we wander around a bit through the narrow streets, before visiting a small museum dedicated to a Sufi saint, who lived here in the 19th Century. His heritage had been ignored by the strictly-secular Soviets, but in 1993, after independence, his relatives resurrected his house again, and created the museum, mildly interesting. Above another of the ruined castles, Yamchun Castle, is the absolute gem of the valley, the Bibi Fatima springs. Hot water of a perfect temperature streams out of the rock face in copious quantities, into a pool which is alternately open to women and men, lightly regulated – to the extent that Sofia needs to chase away a few all too enthusiastic men who are ready to invade the women’s term before they have left. After the hot bath, walking back to the car, we are rudely brought back to reality, with a snow and hail shower quickly wiping out the warmth again. 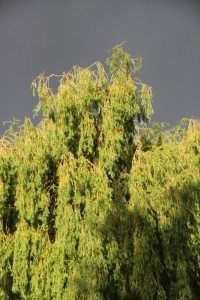 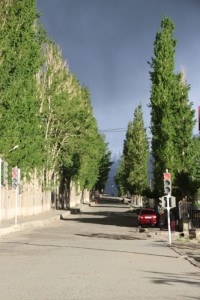 and the first traffic light, since Osh

At the end of the day, still followed by rain, we arrive in Ishkashim, an even bigger a town, with the first traffic light since we left Osh, although rather superfluous, without any traffic to speak of. This is where every Saturday the Afghan market is being held, an interchange between Afghan and Tajik traders on an island in the middle of the border river. Obviously, we had timed our arrival on a Friday afternoon… 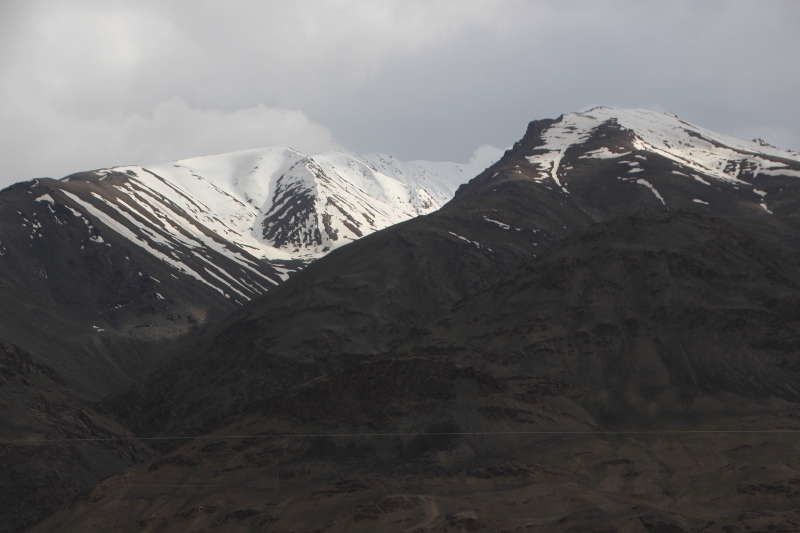 Afghan snow-covered mountains all along the border