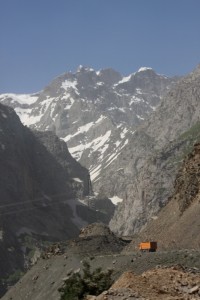 the road leading to the Anzob tunnel

The Anzob tunnel, on the road between Tajikistan’s two main cities, is a nightmare; I show some video footage of the experience

In the old days the main road between Dushanbe and Tajikistan’s second city, Khujand, went across a high mountain pass, painstakingly zigzagging up, and down on the other side. No more! An Iranian company was given the task to drill a tunnel through the mountains, and they completed this, the Anzob Tunnel, in 2007, less than 10 years ago. Well, ‘completed’ is too much said. There is a hole on both sides of the mountains, and they are connected, but the road through the mountains has not been surfaced, the tunnel is leaking, there is water all over the place, and potholes are growing by the day. Our Landcruiser just about manages to get through, how smaller saloon cars do it, I don’t know. Some don’t, actually. One car has broken down inside the tunnel, and a little further another, a huge truck coming from the opposite direction, too. The rest of the traffic snakes around it, creating a huge traffic jam where only one lane is available. Other obstacles appear – last minute, because the tunnel has hardly any light – too, in the form of giant fans on a rickety frame, which have been placed in the tunnel, blocking one lane, in an attempt to ventilate the air. A failed attempt, that much is clear. 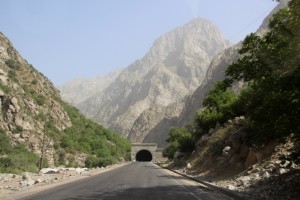 the entrance to one of the smaller tunnels along the road 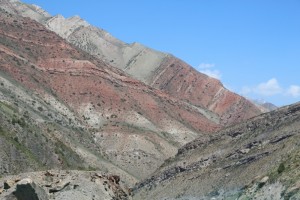 the mountains around the tunnel area 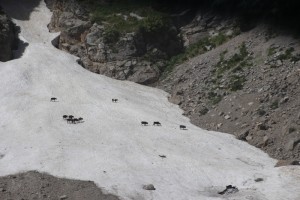 and the occasional small glacier, populated by cows 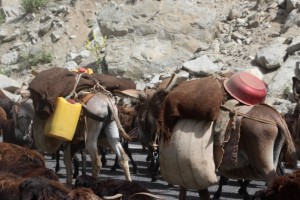 here, too, the road is often filled with sheep herds accompanied by donkeys

We negotiate the tunnel at snail’s pace, frequently stopping for approaching traffic, at other times avoiding the biggest potholes – difficult to spot as they are filled with water. The tunnel is 5, or 8, km long – different sources, different numbers – and driving through it is a rather unpleasant experience. Somebody compared it to driving into the mouth of hell. No better feeling than, after 20-30 minutes, driving out again.

It is not clear what is going to be next, for the tunnel. Obviously, the situation is deteriorating by the day, despite brave workers actually trying to implement repairs inside the unlit and unventilated tunnel, quite a hazardous undertaking. The Chinese have been invited to upgrade the tunnel, but don’t want to touch it, claiming that the Iranians have drilled in the wrong place. Drill a new tunnel, perhaps, in the right place?

Pity they haven’t maintained the road through the pass anymore. 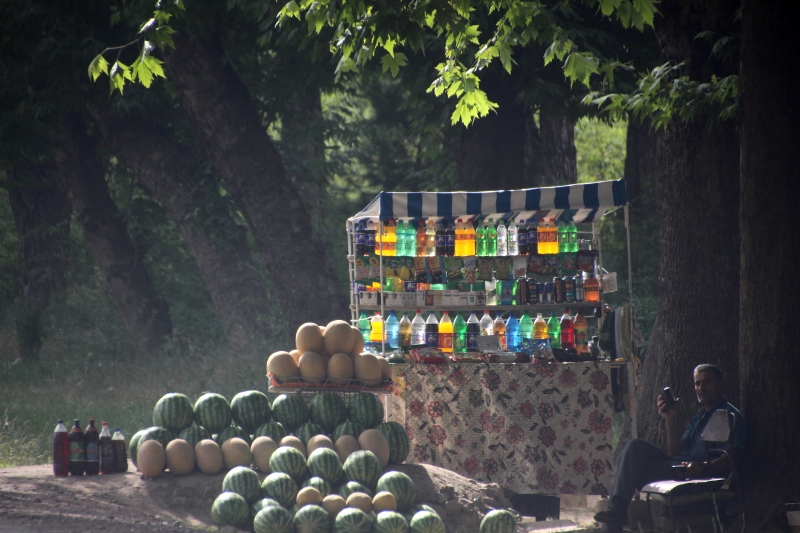 vendor selling drinks and melons along the road