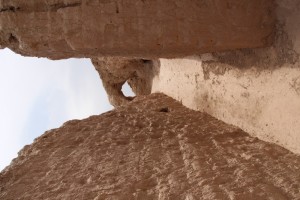 a mud-walled corridor in Toprak Kale

The desert between Nukus and Khiva contains a range of ancient castles, impressive solitary hill top fortifications that are fun to climb and explore.

Outside Nukus we have already seen the remains of one of the ancient mud-brick forts in Karakalpakstan, but there are many more in the area, and in the Khorezm province nearer to Khiva. Assuming a certain similarity between these castles, we opted to go and see just a few, en route from Nukus to Khiva. 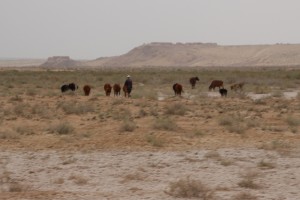 Ayaz Kale, two castles visible from far, perching on the only rocky outcrop in the surroundings

Why anybody would have wanted to build a castle, in the middle of the desert, was long unclear to me, until I read somewhere that originally, say 2-3000 years ago, the Amu Darya just vanished in the desert, in a large swampy delta, which created a fertile zone attracting lots of population – and population, of course, needs to be controlled by war lords, I suspect not different from the present day situation in Afghanistan or Somalia. In any case, the few sources on these castles are somewhat vague on their original construction, placing that the earliest fortifications in the 7th Century BC, with other structures variably put up in the 2nd to the 12th Century AD. Whatever is the case, they have been falling apart for the last hundreds of years, apparently because the Amu Darya forced a connection to the Aral Sea, thereby draining the wetlands of the surrounding area and turning them into desert (so one could argue that the irrigation schemes now draining the Aral Sea are in fact putting things right again…). 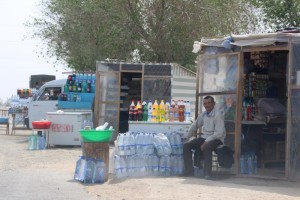 also the outskirts of Nukus: stocking up for the long ride through the deserts 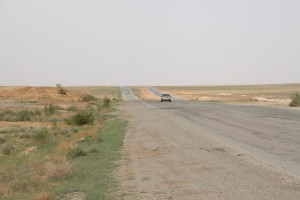 soon, the country outside Nukus becomes rather monotonous 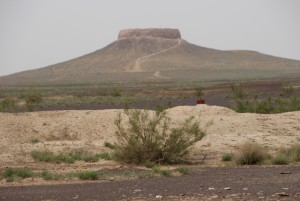 Chilpak Kale, along the road, an impressive hill top 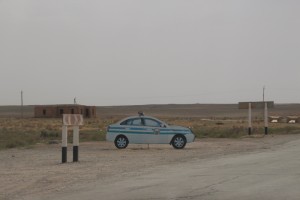 except for the cut-out, cardboard police cars

We managed to find a driver and a car prepared to bring us all the way, a long drive through a rather featureless desert, the only excitement an occasional distant fort, or a cut-out police car – to temper the speeding, I suppose, which cannot be very effective given that almost every driver here is a local, and once you have seen the cardboard car, it won’t scare you anymore. What does impress the people is real police, or the anticipation of real police: close to known police check points our driver slowed down, significantly, and even put on his seat belt. Sheer fear of what police can do to you, at the least of infringements. 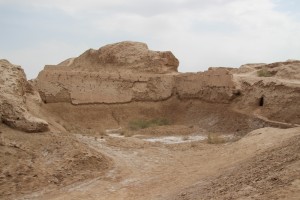 The vegetation varies, from little to very little, yet there are occasional cows roaming around that find still something to graze on. Sure enough, we also encounter the odd camel, along the road.

Near the village of Boston – really – we turn off the main road to enter what is called Ellakoale, meaning fifty castles. As I said, we would be opting for a few only…. 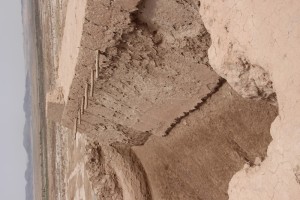 this wall must have stood for hundreds, if not a thousand years, and is construction-wise not different from what the people do now 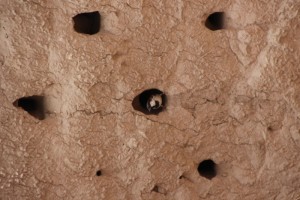 nowadays, the fort is mostly populated by birds 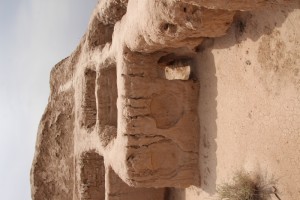 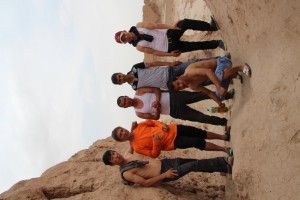 Uzbeks love having their picture taken, even if they are drunk; these were the only other visitors 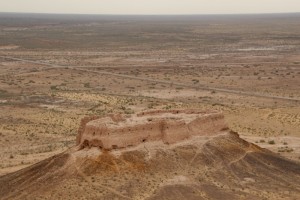 the lower of the two Ayaz Kale’s 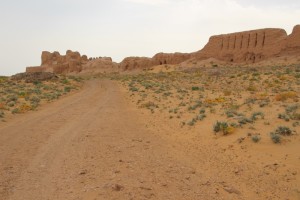 view of the upper Ayaz Kale 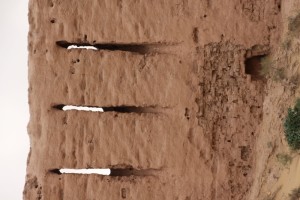 part fo the defenses of Ayaz Kale are still standing

The castles are, well, somewhat as expected, mud piles in the desert. They must have been impressive structures, once, but lack of maintenance makes them crumble ever more. Yet, it is a great feeling to be wandering around these places, without any other tourists: we are the only ones here, except for a group of drunk locals who clearly expected to have the place to themselves, too, and didn’t seem to appreciate being disturbed, observed. Toprak Kale is apparently an old Royal fort, with underground, now-roofless chambers inside a fairly large walled structure, Koy Krylgan Kale was touted as a perfectly round fortified structure, which did not impress us that much – round, OK, but perfect is hard to see with so little of the walls remaining, and fortified no more, whilst Ayun Kale is the largest of the three, and apparently the largest of all, a huge hill top construction on a rocky base, with a lower second castle nearby. 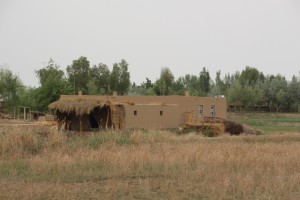 a modern house, using the same materials as were used for the Kale’s

Altogether a worthwhile excursion, not in the least because driving from one to the other also gives us the chance to observe rural life, mostly dominated by the cotton culture. It is April, time to saw, and lots of people are busy in the fields, some of which already show the distinct green lines of cotton seeds turning into plants. Nearer to Khiva, this area is obviously more prosperous, and houses vary from neatly built mud-walled structures to whole compounds of modern, single story villas – although many of the latter ones are still conspicuously empty. Although in the desert you come across the inevitable rubbish, the houses and yards are spotless clean, the gardens well maintained. 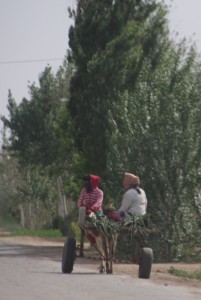 a rare view, but there are still some donkey carts around entrance of a simple rural house around Boston

The last part of the trip, to Khiva, we once more cross the Amu Darya, across a large, modern bridge. Police check points of either side, of course, and many travellers have reported that they had to show passports: after all, you are now leaving Karakalpakstan! In our case, the smart phones of policemen kept them sufficiently occupied not to bother any tourists. 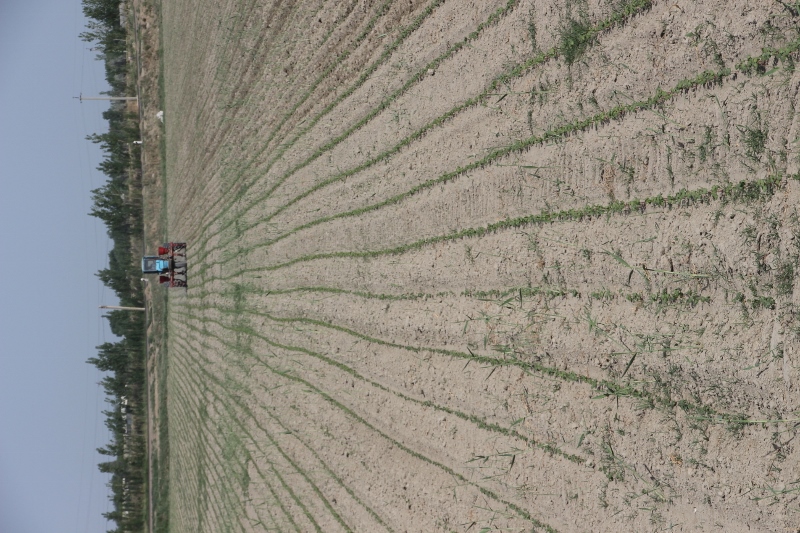