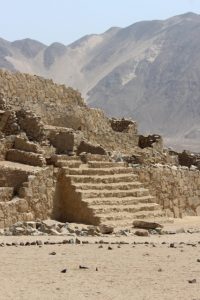 stairs to one of the six pyramids in Caral

The ruins of Caral are the most ancient archaeological finds in Peru, by far. Against our expections, they proof to be spectacular.

Barranca is another one of these small coastal town that have not much of interest. Earlier we perhaps could have enjoyed the beach, but the season is over, and almost everything along the boulevard is closed. Yet, the centre has a pleasant enough atmosphere to establish ourselves for a couple of days. But we are not here for Barranca, we are here for the archaeological site of Caral, by far the oldest in Peru. 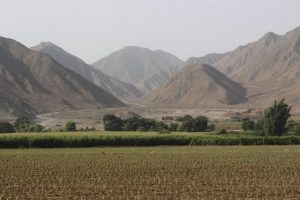 the valley of the Supe River

The road to Caral, an unsurfaced road branching off the Panamericana, follows the Supe River, through an attractive valley. Lots of agricultural production, from sugar cane to maize; fruit trees everywhere, and passion fruit plants blooming. A little further back, there are several lesser pyramids and other structures being unearthed, all part of the Caral culture, and subordinate to the royal complex we are heading for. 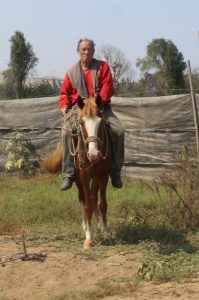 local transport is by horse 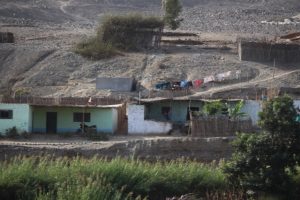 humble houses in the country side 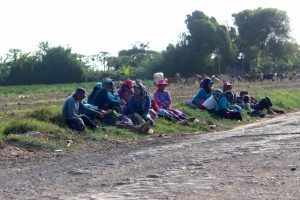 workers waiting for transport at the end of the day 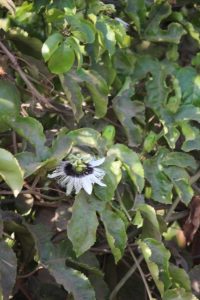 the flower of the passion fruit 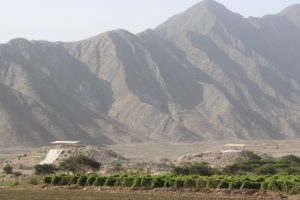 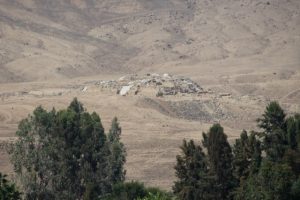 not much progress yet 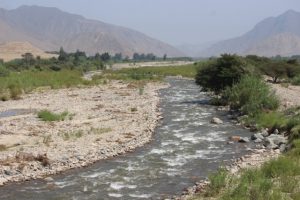 the Supe River, which we cross by footbridge on the way to the Caral site 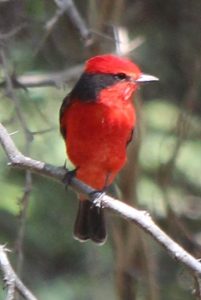 and there he is again 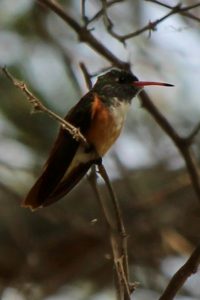 but with others, this time 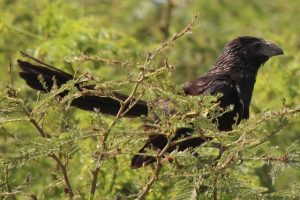 even though not all the birds are brightly coloured

Although the site has been mentioned in earlier records, it was only properly explored in the late 1990s, by an archaeologist who, using aerial photographs, decided that the six stone hills she observed could possibly be man-made, rather than natural. So she started digging, and unearthed six stone pyramids, dating back some 5000 years ago, so long before the Moche and the Chimu cultures, long before the – inferior – adobe pyramids we have seen in around Chiclayo and Trujillo. 5000 years ago, that is time-equivalent with Mesopotamian civilisations, and Egypt’s pyramids. 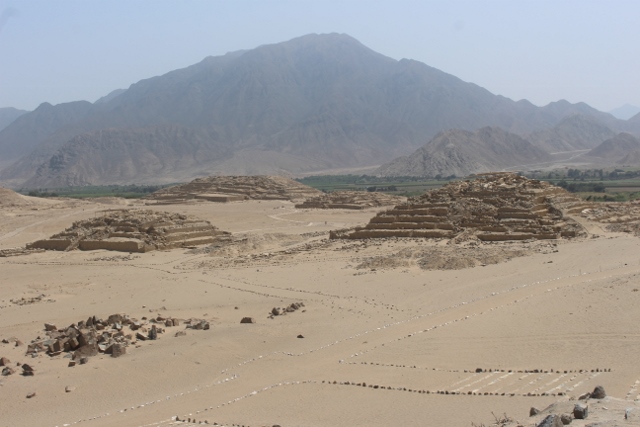 the first views of the pyramids – not unlike Egypt, no? 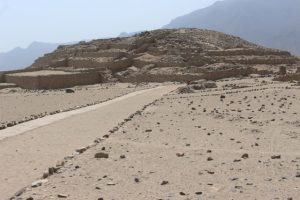 one of the bigger ones, indeed called the Great Pyramid 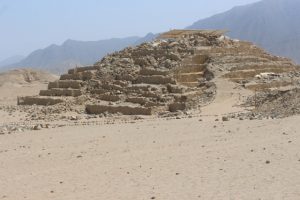 and this is the ‘La Galeria’ Pyramid 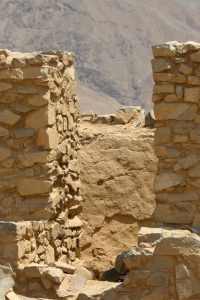 entrance to one of the dwellings 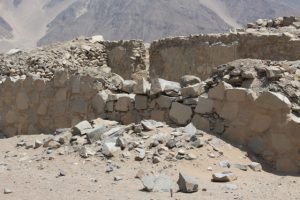 outer and inner wall, the latter one with stucco remaining 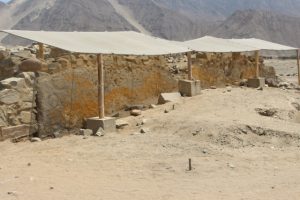 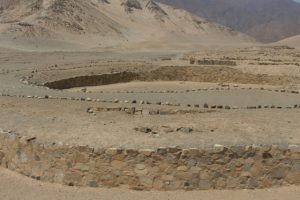 one of the circular plazas, used for offerings 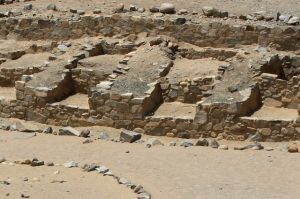 niches that may have been storage places – for offering material 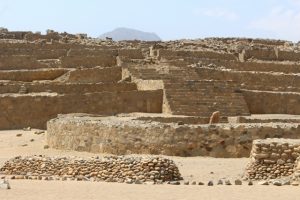 the stairs to the Great Pyramid 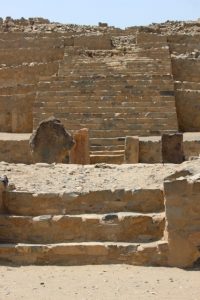 another view of the stairs 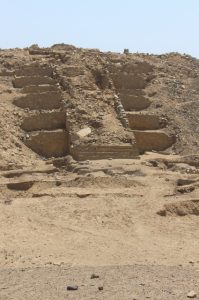 other,not yet excavated, stairs to a smaller pyramid 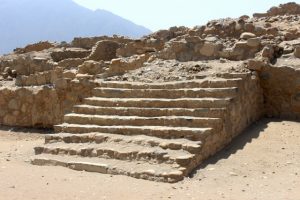 We didn’t have a lot of expectations: a site not very well known, even though it is relatively close to Lima, the unsurfaced access road, absence of tour buses. But what’s attractive is that our 10 year old guide book mentions that here, at last, we could wander around freely, could climb the pyramids, unconstrained by ropes outlining what is out-of-bounds, and instead directing the prescribed route, the path. Finally, Indiana Jones revisited! 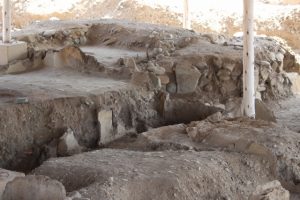 a residential place, note the stucco remains on the wall 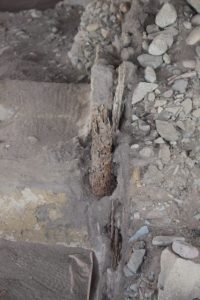 and the stump of one of the wooden beams once supporting the roof – also 5000 years old! 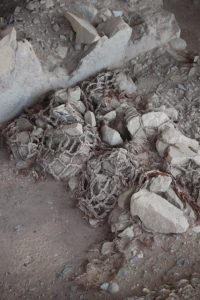 cottton nets used to collect stones and place them inside the walls – also 5000 years old! all together a fabulous example of aan old house

Not so, anymore. However much we argue, you can only enter the site with a guide, one who makes sure you do NOT climb the pyramids, do NOT wander around freely, and furthermore tries every trick to shortcut our tour as much as possible. From a distance we already noticed that we may have to readjust our expectations. The many different buildings stretch over a large area, and they look absolutely fascinating from afar. “Ah, senor, una hora, no mas” – one hour, no more, according to the guide. To cover this vast area, look at each and every construction, around each and every corner? Even without climbing the pyramids that is not going to be enough.

One reason that these pyramids have been kept so well, is that when they were abandoned, around 1800 BC, they were filled in and covered with rocks, so that from the outside they were unrecognisable. (Another reason maybe that they now don’t allow tourists to climb the pyramids anymore!) On site, several people are working to unearth more and more from the structures, the six pyramids in a large circle and several ceremonial platforms, an amphitheatre, residential dwellings and other pieces of construction. Our guide, in fact, turns out to be a nice guy, although he gets exhausted by the very many deviations from the official route we propose. At one stage I get told off by somebody else on the site, because I have drifted too far away from my guide: no amount of ingenuity is going to help, here! In the end we spend a good two hours, all on the official paths, thoroughly enjoying this impressive complex. 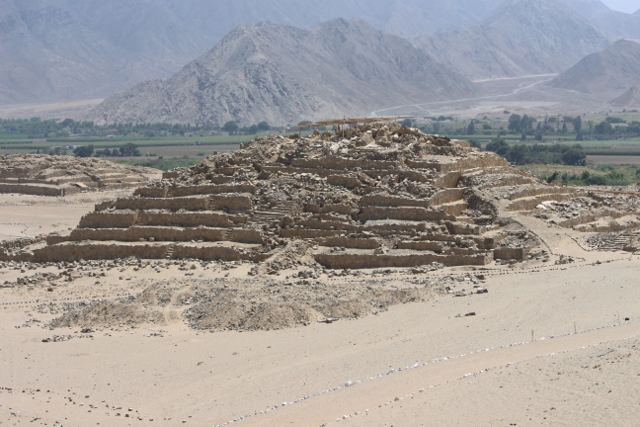 another view of the ‘La Galeria’ Pyramid 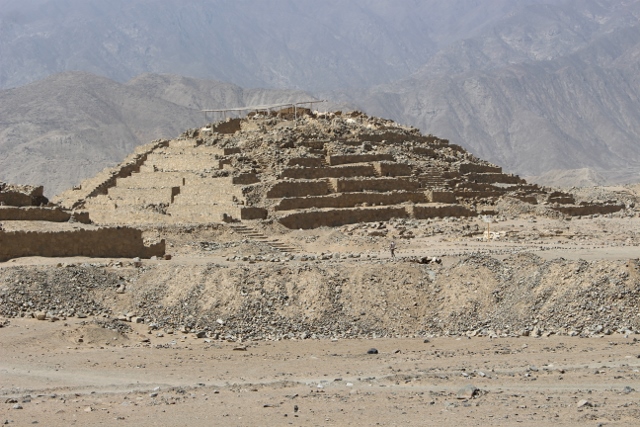