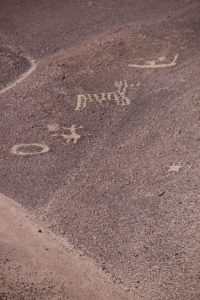 geoglyphs on a mountain side in the Cerros Pintados

Geoglyphs, enigmatic figures on the mountain slopes, occur in many places in the Atacama desert, but nowhere as numerous and varied as in the Cerros Pintados.

Another fascinating element of the Atacama desert are the geoglyphs, which date – probably – from somewhere between 900 and 1450 AD. Unlike petroglyphs, which are images carved into the rock, with a sharp object, geoglyphs are images on the rock slope created by either removing loose material from the slope, so that equal colour frames are created, or by adding rocks, of the same colour. Or mixing both techniques, of course. Done at the size common here, this results in a striking gallery of geometric figures, and human and animal figures, visible from far away. Why the early inhabitants did this? Perhaps to guide trade caravans that came down from the mountains, but really, I don’t think anybody really knows. Why here, and not somewhere else? Why so many in one place, if it is only for signposting? 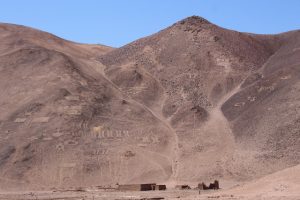 this gives an idea about the scale of the geoglyphs, compared to the houses below 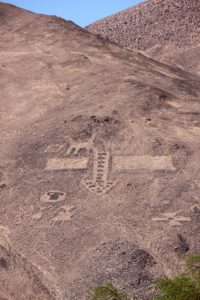 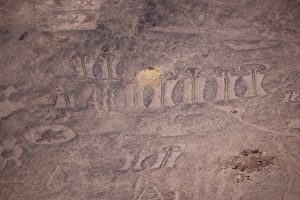 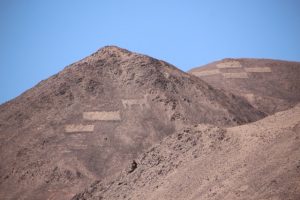 a huge lama, and rectangles, from which the loose stones have been removed 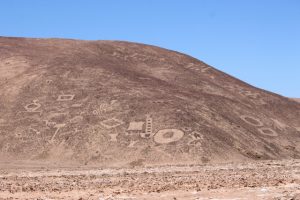 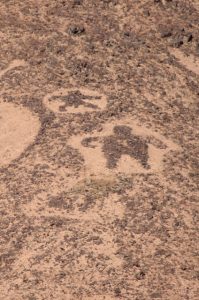 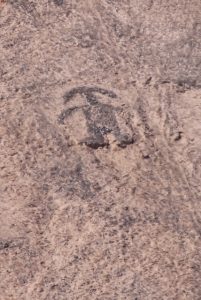 this is the additive technique, laying stones together 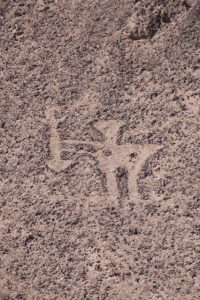 and this is the other, taking loose material away (and add the nipples)

The first location we visit is immediately the most impressive, and most extensive in terms of different figures. Cerros Pintados, in the Salar del Pintados – Salar is an area exploited by the saltpetre industry, the oficinas – is actually a national monument, containing over 400 geoglyphs in several groups along a mountain slope. A walking path leads past the figures, in such a way that you never get really close (and thus cannot damage them by removing rocks or otherwise, a good decision). In any case, from nearby you would probably have difficulty recognizing many of the figures. Downside is that we don’t get a good feel of the size of these figures, which according to people we talked to are several tens of meters tall, each of them! Imaging the work this has taken, once again under the burning sun, I assume. 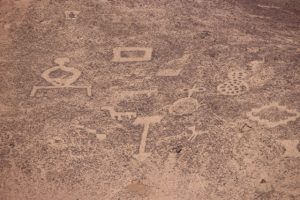 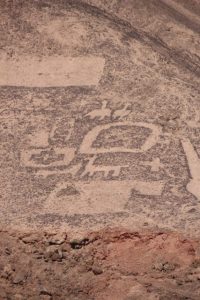 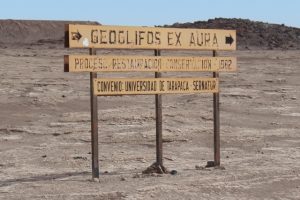 one of the signs elsewhere along the road, indicating geoglyphs nearby

Some of the more important geoglyphs are in the guide book. But driving around, there happen to be many more, just small, individual panels. To be honest, we don’t spot them ourselves, all of them are properly indicated by the Chilean department of culture, with a sign along the road. And, to be equally honest, after you have seen a few, or a few more, like we did, you have seen them all, I think. But they remain a fascinating element of early civilizations in the desert. 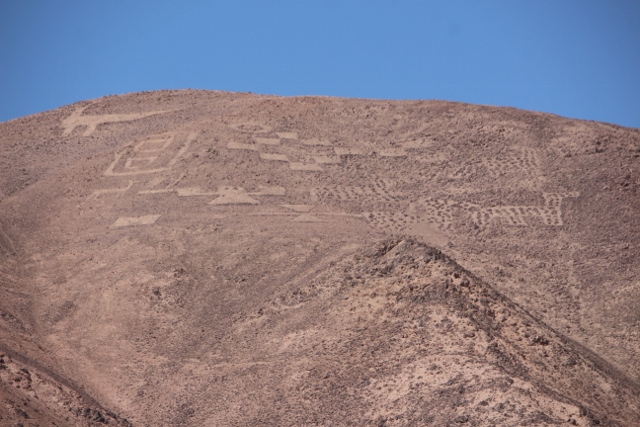 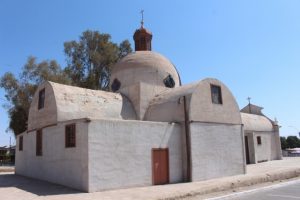 the interesting church of Matilla 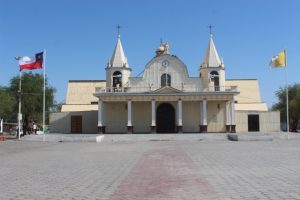 and the horrible corrugated iron monster in La Tirana 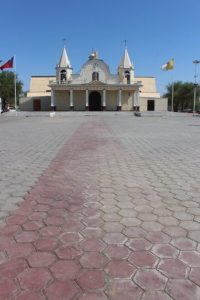 with a massive square in front 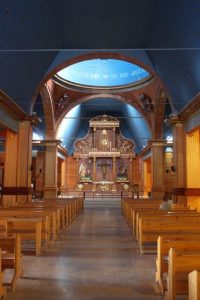 and pretty ugly inside, too

After Cerro Pintado we drive to the oasis towns of Pica and Matilla, a weird experience. One moment you drive through the desert, and then suddenly this distant green blob is appearing, and coming closer and closer, there is this town, with fruit plantations around, palm trees, and – that’s why – a mineral spring. Exploited not only for irrigation, but also for tourism purposes: we could get ourselves a ticket to the spa. One look makes us decide otherwise. Several tour busses have unloaded their cargo, who are all fighting for a little space in the communal bath. We treasure our Thermas de Socos experience, and instead drive on to La Tirana, another village, but less oasis-like. La Tirana is three times nothing, except for its festival in July, when thousands of pilgrims come to worship the local Virgin. It is February, a lot quieter, which gives us the opportunity to admire the church; unlike the many charming little wooden churches we have seen mostly, this one is a huge corrugated iron monster, truly horrible. Also on the inside. Nothing compared to the elegant Eiffel church in Coquimbo. Like the geoglyphs, perhaps you don’t need to see them all. the desert on the way to Pica, not yet the oasis