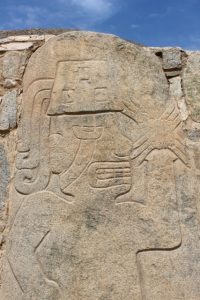 a carved megalith in the Sechin complex

Near the town of Casma is Sechin, one of the most enigmatic archaeological complexes in Peru, and clearly different from what we have seen so far.

We are moving south again, direction Lima, with two weeks left. Our next target is Casma, which is so small, that the main busses don’t stop there. We change to a combi, a minibus, in Chimbote, where we initially planned to stay for a night or so. Luckily, we don’t, now. Chimbote is a large fishing port – attractive, lots of fishing boats – with a large fishing industry. Unattractive: the smell from the  processing plants is pervasive, and the whole town smells fish. 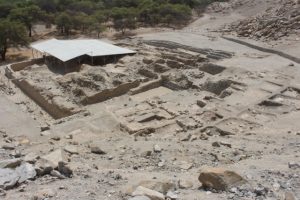 the Sechin complex from above 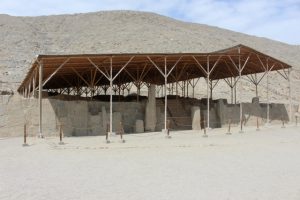 and from right in front 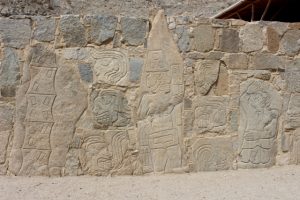 this is how the outer wall looks, large megaliths put together 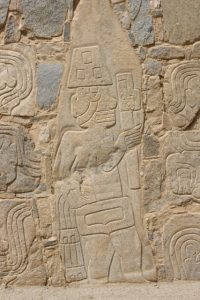 one of the warrior temple priests 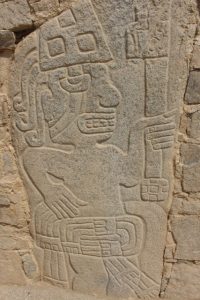 and another one, weapon in hand 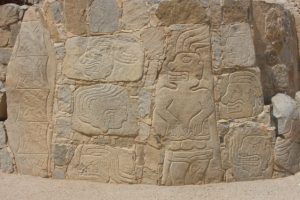 the stones are carefully put together, with smaller ones in between 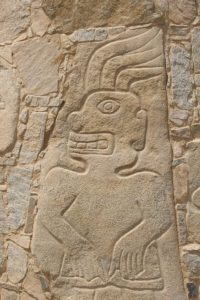 one of the stranger figures, Kamagurka-like

Casma itself is not very interesting, but just outside is Sechin, one of the more enigmatic pre-Inca cultures of Peru. In fact, not much is known about this complex, thought to be dating back to 1600 BC, or even older. The main building is a temple of which the surrounding wall is made of carved megaliths, held in place by smaller rocks and mud. It looks like this has been recently done, but everybody on the site assures me that it is the original structure, save for a few blocks that have been put back after earthquake damage. The carvings are quite something, representing priests on some of the blocks, and body parts – interpreted as severed heads and other parts – on others. Having been in Peru for some time now, these images are clearly different from what we have seen so far, especially the heads, with bulging tongues, rough hair, popping eyes. But very expressive. 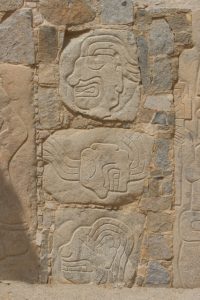 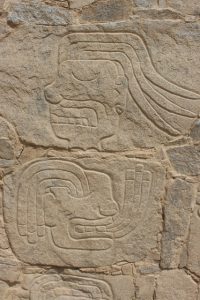 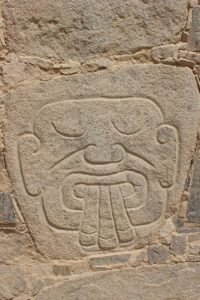 or this one, a rare frontal depiction 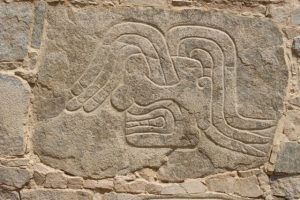 and my favourite one

Further sites include a fortification, or perhaps it is an ancient observatory, up in the mountains, but Casma doesn’t have much of a tourist infrastructure. I fail to locate a travel agency cum tour operator, taxis are not interested to drive up to the castle, and the only person who offers to take us demands an extraordinary amount of money for the two hour excursion, and turns out to have no car himself. From the photos, we decide against it: we have accepted that we cannot see everything in this country. And Casme is too limited to stay much longer: we count six different pollerias, essentially the local – and far superior – version of Kentucky Fried Chicken, but not much else in terms of eating. Time to move on. 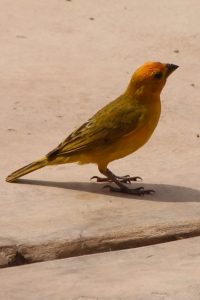 some colour comes from the birds 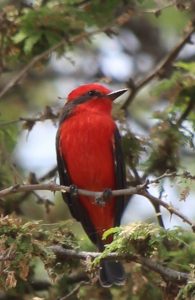 not in the least this bright red one 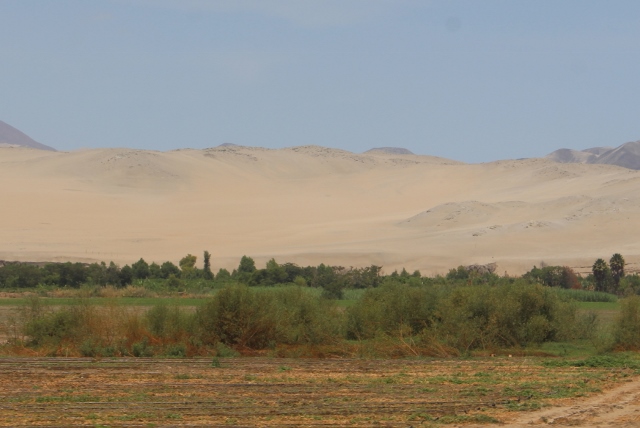 and this is the local landscape, pretty dry all around except the river valley