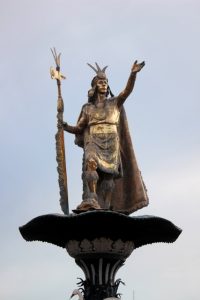 statue of Pachacuti Inca Yupanqui, the first Inca to expand the empire

Before we continue our travels into the Inca heartland of Cusco and the Sacred Valley, a little history about the Incas, to put things into perspective.

I suppose before we get to Cusco, once the splendid capital of the Incas, a little history is appropriate. After all, just the thought of the Inca empire already invokes grand images of hilltop fortifications, plumed warriors and golden temples.

It came as a surprise to me to learn that the empire actually lasted less than a hundred years. The Incas had lived for a quite a while like any other mountain tribe, controlling a small area only, and it was not until around 1438 AD, with the accession of Pachacuti to the Inca throne, that, in two generations, the Incas expanded their geographical control, conquering and subduing many of the other small, agricultural cultures. The empire now stretched more than 5000 km, from Ecuador in the north to Bolivia and parts of Chile in the south, and united for the first time coastal people and mountain people under a common administrative system. Obviously, the Inca domination was not only military, but owed much to the governance put in place by their rulers, setting up a near-perfect hierarchy, and a network of state food stores and arms caches; providing protection against not only raiders, but also famine, in return for tribute, and the obligation of every family to each year donate 2-3 months work to the empire. This created the workforce which ultimately put all those fabulous temples and fortifications in place, and built a road network connecting the entire empire in a way never done before. There are Inca trails everywhere, not only at Machu Pichu. 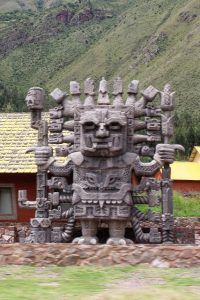 another representation of the Inca, in front of the Inca museum in the Sacred valley 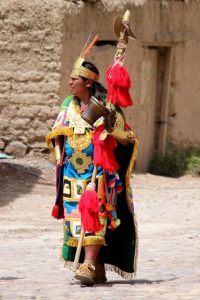 and look, there are still a few of them alive!

When Francisco Pizarro, an illiterate adventurer from the Extremadura in Spain who had already spent 20 years in the Americas, first arrived in northern Peru, in 1527, for not much more than a reconnaissance, Huanya Capac was third generation emperor – grandson of Pachacuti -, but by the time Pizarro came back in 1532, Huanya Capac had died, from what was probably smallpox. And the empire he left behind was being torn apart by a civil war between two of his sons. Pizarro had returned to conquer, and marched to Cajamarca, in northern Peru, where, with 168 men, he managed to capture one of the warring brothers, Atahualpa, who led an army of – get this! – perhaps some 80,000 warriors. But the Inca warriors and their primitive weapons were powerless against the steel body armour of the Spanish, and the armoured horses, from which the Spaniards hacked down with their razor-sharp steel swords that cut through any form of protection the Incas may have had. It simply proved impossible to wound, let alone kill, a Spanish mounted soldier. Well, soldier, these guys were all opportunistic adventurers, with very little formal military training, but thanks to their amour and weapons they were invincible.

While Atahualpa was kept in captivity, his armies nevertheless managed to kill his brother, and win the civil war. Pizarro attempted to control the empire through his hostage, who thought that if he gave the Spaniards what they wanted, lots of gold and silver, they would ultimately leave again. Wrong, of course, when they saw how much gold and silver their hostage could command, they only wanted more. Ultimately, they executed Atahualpa, marched to Cusco, conquered it, and put a younger half-brother on the throne, the puppet emperor Manco Inca. Who, for a while, made the same mistake, trying to placate the invaders in the hope that they would leave again. 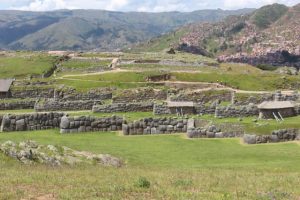 the fort as Saqsaywaman, above Cusco with the zig-zag defense walls created by Manco Inca 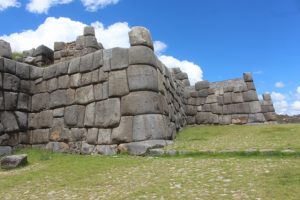 another view of the Saqsaywaman defense walls

In 1536 Manco had realised that they Spanish would never leave, and managed to escape. He assembled another massive army, of perhaps 100,000 warriors, and made a last attempt to rout the invaders by besieging Cusco. They came close to eliminating the Spanish inside the town, but just not close enough: with a small cavalry force the Spanish broke through the Inca lines and conquered the fort above Cusco, Saqsaywaman, thereby temporarily lifting the siege and securing their survival. At about the same time Manco’s most successful general, who had finally succeeded in killing several Spanish columns sent to relieve Cusco, by luring them into narrow ravines and then bombarding them with boulders from above, was sent to capture Lima, where Pizarro himself was now based, a suicide mission which ones again demonstrated the supremacy of Spanish cavalry on flat ground. Lots of warriors died, as did the general himself, and many of his sub-commanders. Manco retreated into hiding, first to Ollantaytambo, and when more Spanish troops were mobilised, ever further into the jungle away from Cusco. And no matter that the Incas fought another 40 years of guerrilla war, they had now definitely lost control over their empire. Less than a hundred years after it had been established.

next: the Inca capital, Cusco. 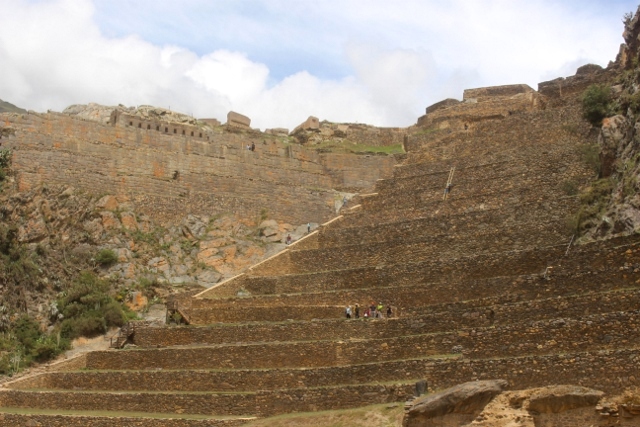 the hastily reinforced defense works at Ollantaytambo, after Manco Inca had been forced to withdraw 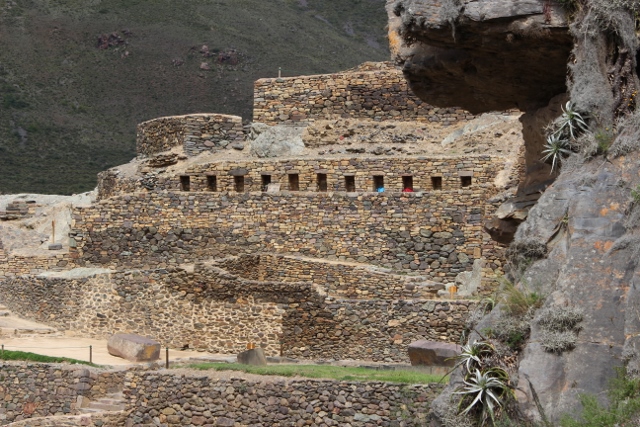 the military section at Ollantaytambo