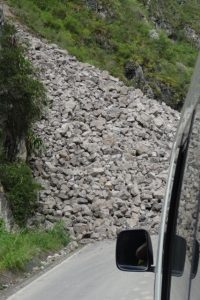 rocky landslide on the way to Chachapoyas

Traveling the long road from Chiclayo to Chachapoyas, in the Amazon Region of Peru, turns out to be not very comfortable, and full of hazards, but ultimately with the rewards of changing scenery. It is just that taking pictures was difficult.

After a few days at the coast we need to move inland again, to Chachapoyas. According to the guide book a ten-hour bus drive, so we find a convenient place in between – ten hours in one go is too long. There is a comfortable bus that can bring us, during daytime, all the way to Jaen, six hours away. Sounds reasonable. Until we find out that the bus has not just tinted windows, no, dotted windows, with black lines diagonally across. Which do not only make sure that we don’t see a lot from the views– and forget any photographs! – but it also makes me sick if I look out.

What doesn’t help is that the north of Peru obviously receives a lot less money for road maintenance – or its politicians are more adept at stealing it, if I am to believe the local taxi drivers. The last few days around Chiclayo we had already noticed many potholed roads, and in some of the smaller towns the main through-going street was so bad, that the tarmac had been removed altogether, leaving an unsurfaced road to the whims of the rainy season. With predictable effect, on the road, and also on my stomach, when our bus drives, just a little too fast, across these roads.

Luckily, the road gets better as we go along. And reaches the mountains. And goes up, across the 2145 meter Porculla Pass, zig-zagging upward, and then down again. Which doesn’t improve my stomach condition either. Apparently, this is one of the lowest Andes crossings along the entire mountain chain. Great! From what we can see outside, it is dense fog – even with normal windows we wouldn’t have appreciated much of the view.

Eight hours later, not six, we arrive in Jaen, it is already dark; not one of our best travel days, after all. 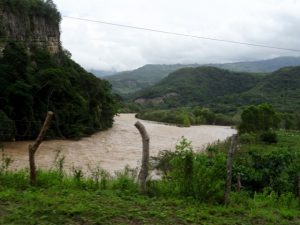 Utcabamba River, the one we will be following upstream in the next few days 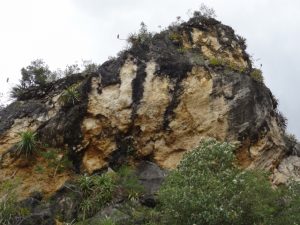 random rock – I have to show something from along the road, haven’t I?

The next day we got back to the mini-buses again, no more strange-windowed big busses – which from Jaen only leave at night, anyhow. We found one that would go directly to Chachapoyas, four hours drive only. Great! “Ah, but we cannot guarantee that the road is open, there are two major landslides along the way, and if they haven’t been cleared, you may need to walk across, to find transport on the other side”. I already see myself hauling our suitcases 200-300 meters across the landslide – the wheels under them will be of little use here, I fear. But anyhow, better to move than to be stuck in Jaen.

This time we can look outside – although taking pictures is still a challenge, in the fully packed minibus. We have crossed the Andes, and we have arrived in a different landscape, still mountainous, with impressive valleys and steep slopes, but now with an unmistakable jungle vegetation. This looks more like Laos, or Vietnam. Or the Amazon, of course, but that is so far unknown territory for us. Except that we are now entering the Amazonas region of Peru. Quite nice, in fact, this change in scenery.

The closer we get, the greater the anxiety, with everybody in the bus. Will they have cleared enough to create a passage for the car? We stop for lunch, an anti-climax. The restaurant only has chicken, of which we get a fried variety. The not-yet-cooked chicken are not only running around outside, but also inside the restaurant. We test whether chicken have cannibalistic tendencies. 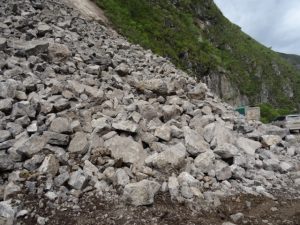 the rockfall, our first obstacle on the way to Chachapoyas

Back on the road, the driver claims that the later we get to the landslide, the bigger the chance it will have been sufficiently cleared. Hmm, but it has started raining again. There is still very little traffic coming from the other side. Then we reach the site of the landslide, or rather, a long row of vehicles lining up in front of it. We join the queue. But a pick-up truck decides to overtake everybody else to try to get to the front. Just at that moment the first cars come through from the other side. The good news is that there is an opening. The bad news is that Peruvians will never back-up; the next ten minutes the whole road is blocked again, not by rocks but by cars, and I still don’t know how they managed. In the end we are lucky, indeed, the traffic starts flowing again, and after a while we pass the landslide. An impressive rockfall, covering the entire road, with just enough blocks removed to allow passage. And, a couple of kilometres further on, the second one, too, this time more a mudslide than a rockfall. The road has disappeared under the mud, and a track cuts across it. 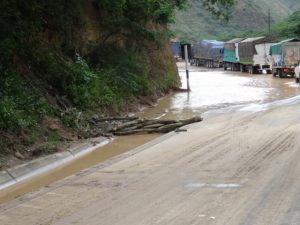 nearing the second landslide, water on the road and cars lined up 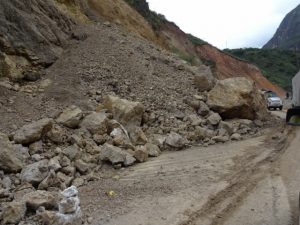 the second obstacle, the mudslide

We are almost there! And then we encounter a third landslide, a new one, obviously. Which cost us another 45 minutes, as it is being cleared, too, by people with shovels and by draglines; heavy equipment, working around the clock, it seems. But in the end this one, too, is sufficiently opened up. Saves me hauling those heavy suitcases through the mud.

When we get to Chachapoyas, almost six hours after we left Jaen, the sun is even shining again.