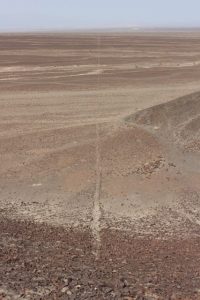 a real Nasca line, dead straight, observed from the top of a low hill

The small town of Nasca is nearest to one of the most enigmatic features of Latin American archaeology, the Nasca lines, a series of sizeable geoglyphs on the desert floor

I know, I said earlier about geoglyphs that, once you have seen some of them, you have seen them all. But in fact not all geoglyphs are alike. The most famous of them are around the town of Nasca: the Nasca lines. And they are quite different from what we have seen so far. 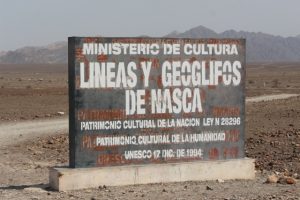 this is about the only responsibility the ministry has taken: anouncing the lines

When we think of Peru, we immediately think of Incas, but in fact many cultures have preceded the Inca empire, and lasted for much longer. The Paracas and Nasca cultures – whether they called themselves so is questionable, of course – are two of those, who dominated this area, Paracas from 900 to 100 BC and Nasca from 100 BC to around 800 AD, or thereabouts. Like so many others, they left lots of traces, in the form of buildings, cemeteries, and exquisitely decorated pottery. However, unlike others, they also left a network of lines and intricate figures on the desert floor. The curious thing is that you can actually not see them on the ground, you have to be in an elevated position, preferably a plane. Which raises the question how these people have ever been able to create these images, or the absolutely straight lines, some going on for several kilometres! 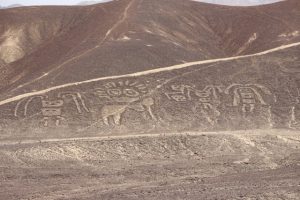 we first visit some of the Palpa lines, older and more traditional-type geoglyphs on the hill side 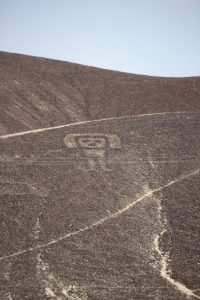 The easiest answer, of course, and popular in certain circles, is: they have been created by extra-terrestrials. That also explains their function, directing the spaceships to a suitable landing spot. More scientific explanations suggest it is an astronomical calendar for agricultural purposes, or a religious expression of shamans, or directions to water resources. The one thing for sure is that scientists are a long way from consensus, on this one. The technique is clear, however, like with other geoglyphs, stones at the surface were removed, and placed at the side, so that the clear, lighter-coloured underground contrasts with the stones, and the normal desert floor. The drought, and the winds, then worked together to keep the lines clear – although what we now see, has, in many places, been somewhat restored by archaeologists; it is not that what we now believe is blatantly obvious has always been so clear, and certainly was a lot less so when the lines were first observed in the early 1940s by an American scholar who happened to look out of the window when he flew over the desert. 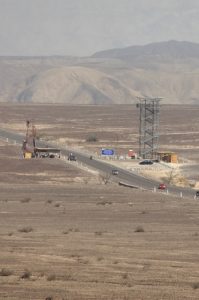 the observation tower, left of the Panamericana highway, and the new, as yet unused one, to the right 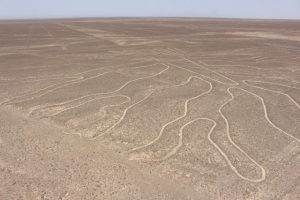 from the observation tower along the highway, contours of ‘the tree’ 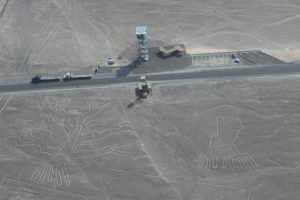 but flying over, ‘the tree’ and also ‘the hand’ are so much more obvious

Our exploration strategy is two-pronged. We first visit a few of the observation points, hill tops, as well as towers that have been erected, to get a first impression. It is actually not always easy to distinguish between what are geoglyphs and what are tracks, until you see the tracks go right through the geoglyphs. Although the place is a UNESCO World Heritage Site, the only protection from entering the desert are the occasional signboard from the ministry of culture, that prohibit entry. No fencing, no guards. In fact, the Panamericana Highway cuts right through one of the tallest figures, right next to the observation tower. Some of the older ones, near the village of Palpa, are somewhat easier to spot, as they have been constructed on the hill side. 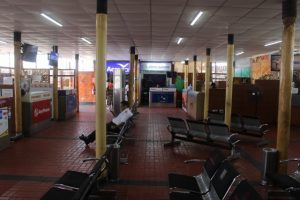 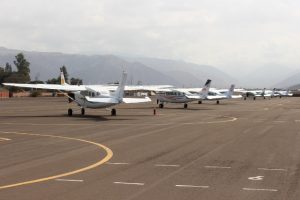 obviously, low season, most small planes have been parked for the day 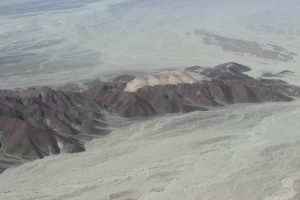 the landscape, from the plane, is also quite something 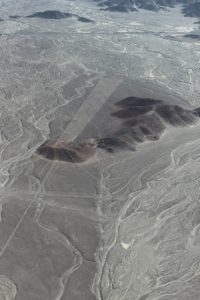 full of winding dry riverbeds, and straight lines and trapeziums 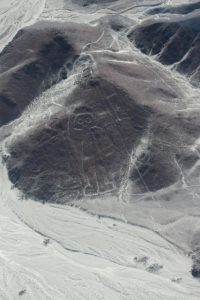 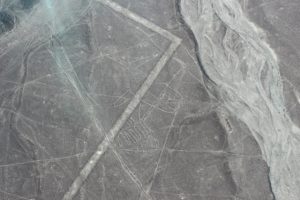 ‘the whale’, not entirely unscrathed 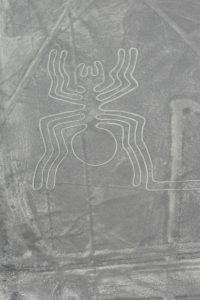 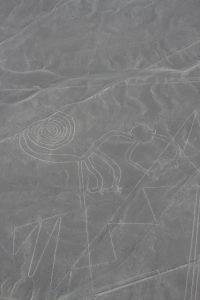 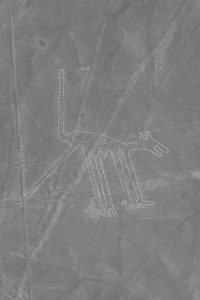 The next day we take a flight in a small aircraft, the best way to get an overview. There are quite a few airlines offering flights, which all cost the same. And it looks that people are, based on their arrival, stuffed in the next plane that leaves, four or five or six to the plane. We have a booking with MovilAir, but fly with Air Paracas, which could equally well have been Air Nasca or AeroDiana or any of the others – which begs the question why there are so many different operators, in the first place. During the half hour flight we pass over a total of 14 figures nearest to Nasca, out of the more than 300 that have been discovered! Including some of the most famous ones, the humming bird and the condor, the parrot and the monkey. The dimensions of the individual figures measure anywhere from 40 to 280 meters in one direction. Apart from the figures, there are also many trapezoids, rectangles, and indeed, straight lines in apparently random directions, sometimes radiating from one point. Why, we don’t know, really. But that only add to the mystery of this open-air museum, one that is not easily taken anywhere else.

next: the mummies – there is more than just lines in Nasca! 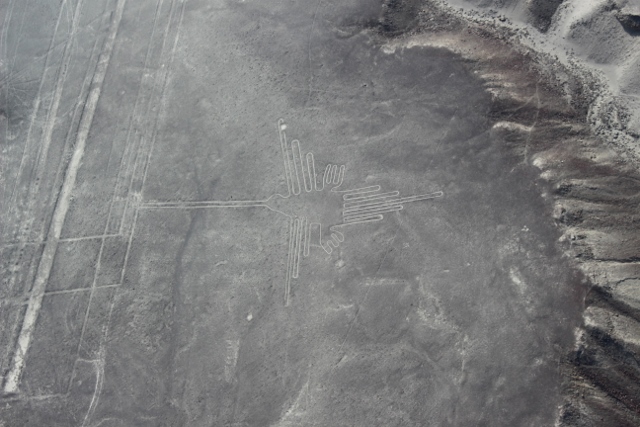 and the most famous of all, ‘the humming bird’ 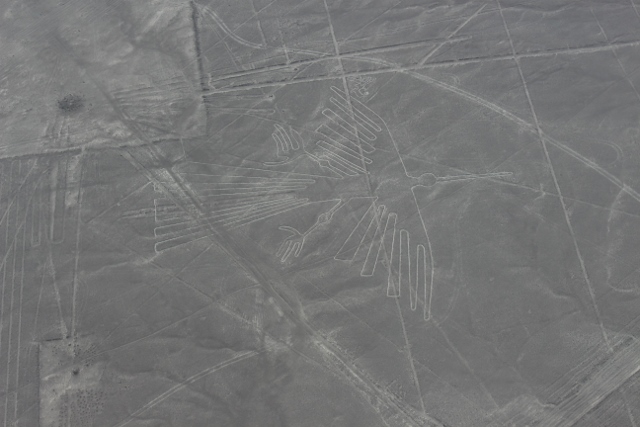 about the same size is ‘the condor’ (which looks a humming bird to me, too) 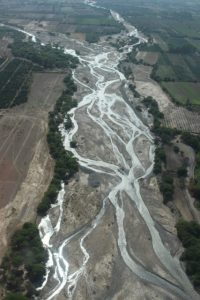 the desert is cut trough by the occasional more permanent river 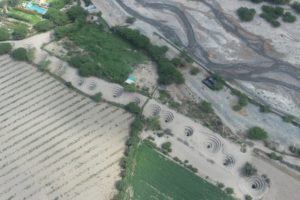 One Response to 36. Nasca