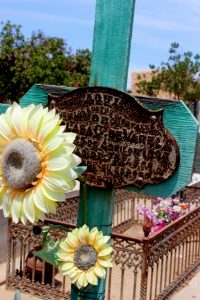 one of the old graves at the Lego Cemetario in Caldera, near Copiapo

Instead of small-town Copiapo, we check out the cemetry of Caldera and the beaches in the neighbourhood, which don’t disappoint. 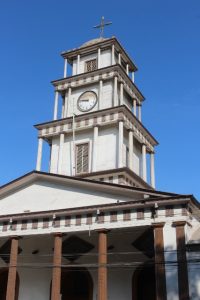 Back from our failed border crossing attempt we establish ourselves in Copiapo, quintessentially small town Chile: mostly low, single story houses in centre, not particularly attractive, but quite atmospheric. Our luck hasn’t restored itself yet. On top of permit problems of yesterday the car also has developed a problem, so we contact the rental agency, waist another morning, and finally get a new car. The only one available is a camionetta, a pick-up truck like the ones we have seen the miners use in the previous days. But who cares? 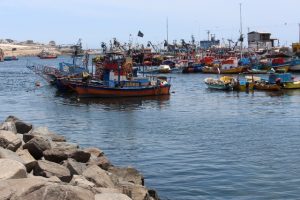 the fishing harbour of Caldera 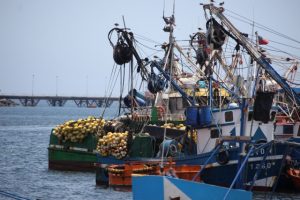 with slightly larger vessels than we have seen so far 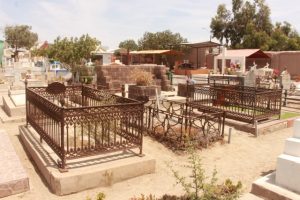 some of the old graves in the cemetry of Caldera 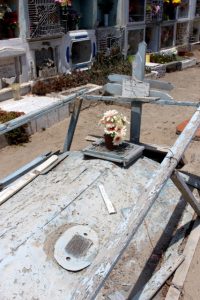 a half-rotten wooden frame around an old grave 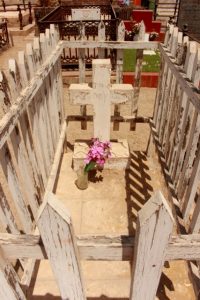 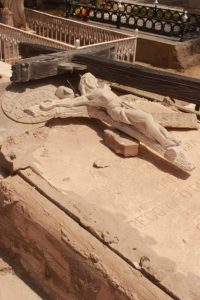 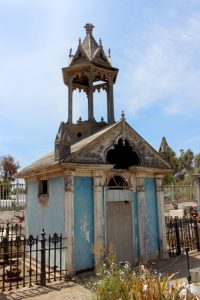 We drive to Caldera, a small fishing port an hour away from Copiapo, with bigger ships than we have seen so far, and with a small beach. Caldera has achieved fame for its Lego Cemetery, which was the first cemetery in Chile to allow people from different denominations – read: Brits and Germans, who were not Roman Catholics – to be buried, too. The cemetery, from 1876, is still being used; between the modern graves are the old ones, framed by rusted iron fences, or rotting wooden ones, with half-collapsed crosses and barely readable inscriptions. Many are overgrown, with the plants planted well over a 100 years ago, and no descendants to take care of the graves anymore. Yet, the caretaker explains that they leave the graves as they are, why not, respect the deaths. One is particularly interesting, a large wooden tomb in the corner, no name, but apparently the grave of John Mackensey, according to legend the late 19th Century vampire of Caldera, who was killed by the town’s inhabitants – but in reality was nothing more than a bohemian Brit with bloody gums. 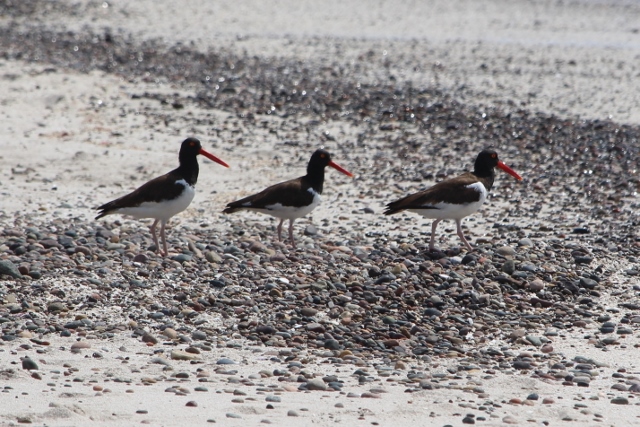 oyster catchers on the beach the beach at Bahia Ingles 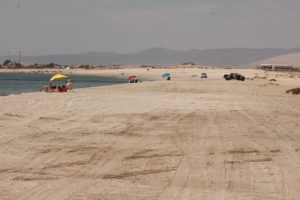 compared to that of Las Machas, opposite

Along the coastal road south is Bahia Ingles, named after the English, who played such a big role in Chilean coastal history, as pirates and as supporting the navy, and later on as investors, in the mines and the railways, and as traders. This is the most photographed beach in Chile, famed for its clear and turquoise waters. It is pretty windy today, the sea is a little rough, and we don’t spot the special colours, only those of the parasols on the beach, which is, unlike any other beach we have seen so far, packed with holiday makers. Just a little further, within view of the Bahia Ingles beach, there is almost nobody anymore, at Playa Las Machas. Also zero facilities, of course, but even at the most popular beaches in Chile there are not many facilities, Chileans bring everything themselves. We dip our feet once more in the Pacific. 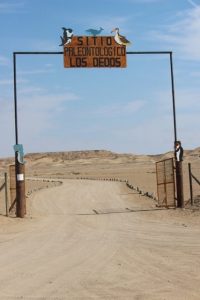 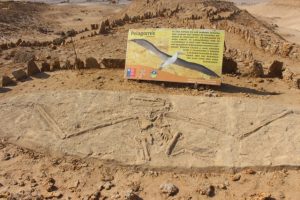 concrete fossils in the Parque Paleontologia 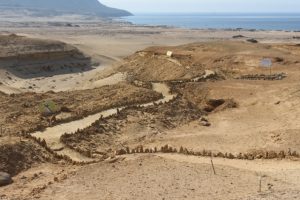 but the views from the park are nice

Quite unexpectedly we come across the Siteo Paleontologia Los Dedos, a palaeontological park. This has to be explored, of course. A very enthusiastic caretaker – a reason in itself to visit this place! – walks us to the first location, where we get to look at large-scale fossils in situ, in the place where they have been found. Except that the real fossils have been taken to the museum and have been replaced by concrete replicas. Hmmm. Still, there are plenty of bone pieces to admire, and great views. 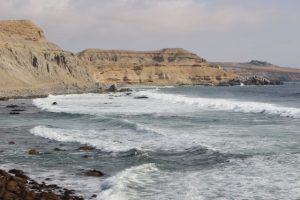 another bay, little further along the coast 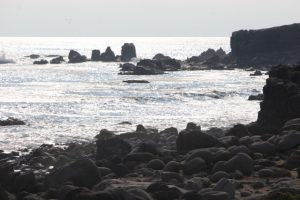 and a rocky strech, crashing waves

Thanks to our camionetta we can get to more beaches, further off the road, but not all are equally nice. Some have been used as drinking and 4WD joy-riding places for local youth, evidenced by mutliple tracks in the sand and empty beer cans. And dipping our feet becomes less attractive when we encounter lots of giant jelly fish stranded on the beach. 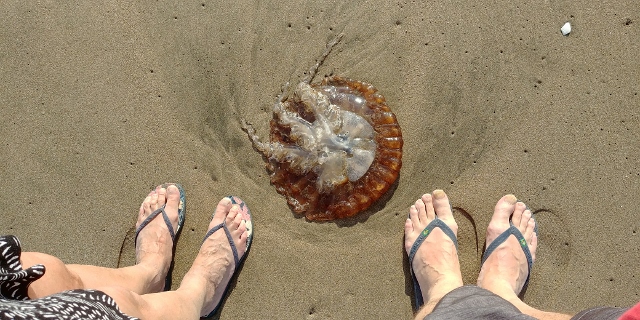 no feet in the Pacific, this time… 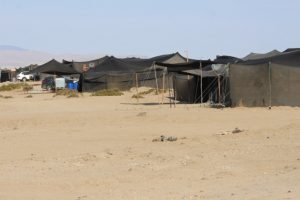 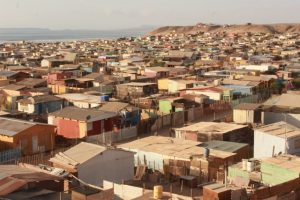 the houses of Puerto Viejo

Some places along the road have been developed, with what I call glamping Chilean-style. Big black tents have been erected, on or near the beaches, and it seems that tourists put their own tents, and sometimes their caravans, under these tents. For privacy? Because it is cooler? Beats me.

At the end of the road is Puerto Viejo, which means old port. But there is not much of a port here, really, and only a small beach. It is a strange village, with a strange atmosphere. It looks poor, yet each ramshackle wooden house is fenced off, with chicken wire or corrugated iron; many seem to have been boarded up. Not a place to stay, as far as we are concerned. We get back to Copiapo.

next: wildlife spotting at the island 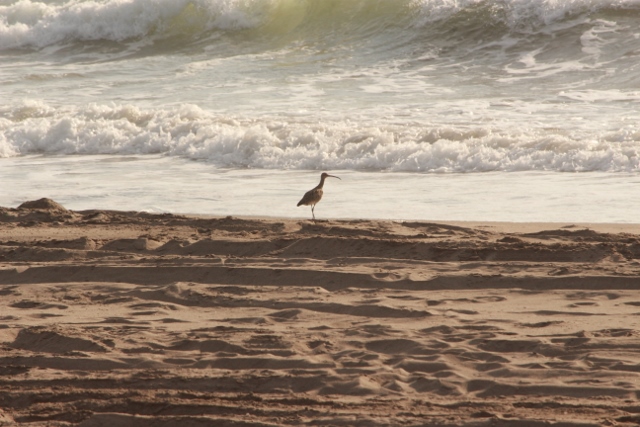 and a lone occupant of yet another beach