19. Vicuna and the Elqui Valley 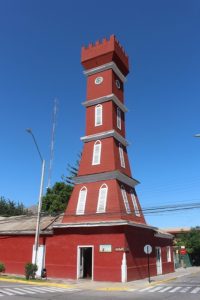 the Torre Bauer in Vicuna

Convenient and pleasant Vicuna is a good base for an excursion into the rather hippy-esque, grape-growing Elqui Valley and its pisco distilleries. 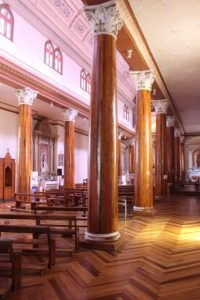 the interior of the church in Vicuna has beautiful wooden pillars 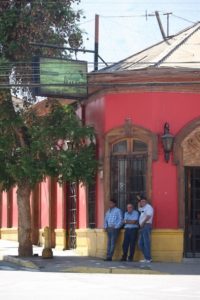 An hour land inward from La Serena is Vicuna, a convenient base to the Elqui Valley, known as one of Northern Chile’s touristic highlights. More about the valley later. Vicuna is a small town, standard lay-out, except that the Plaza de Armas has been renamed Plaza Gabriella Mistral, in honour of the Nobel laureate poet born in the area. The most eye-catching building is a red wooden fake-medieval tower, Torre Bauer, in one corner of the Plaza, prefabricated in Germany and shipped and erected in Vicuna in 1905 to the mere glory of the German-born mayor of the same name. And that is really everything there is to say about Vicuna, except that it is a very pleasant, quiet town, home to our excellent guesthouse for a few days. Oh, and the observatories, but that warrants a separate entry. 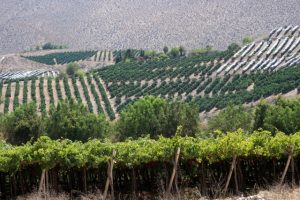 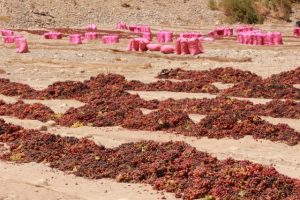 the grapes are dropped in the sun to dry 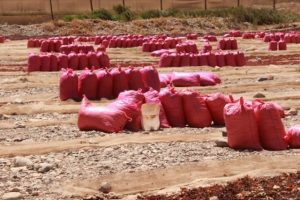 and four days later packed in bags as raisins 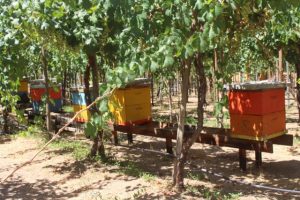 this in the vine yard of a pisco distillery 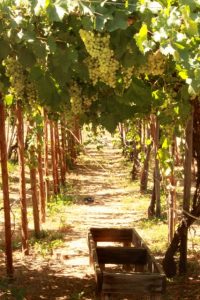 moscatel grapes in the shade 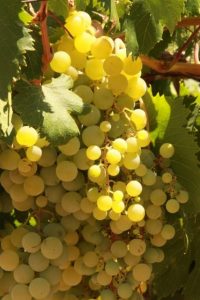 ripe to be harvested 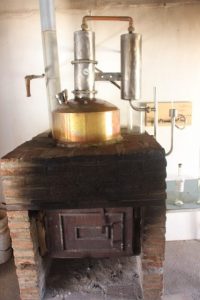 A little east of town (and perhaps west, as well, but it was dark when we arrived last night) start the extensive grape vines which give this area its fame. “Oh no”, I hear you thinking, “not more wineries!”. Well, the first grapes we pass are in fact for eating, not drinking. Or more specifically, for raisins. The ripe bunches are dropped on a piece of waste land, spread out in lines, and dried in the sun. Four days later, grapes have turned into raisins, it is that easy. Well, a bit of cleaning and packaging, details really, but the sun and the dry air do most of the work.

But not all of the grapes are wasted onto raisins. The vast majority is actually used for the production of pisco, the main ingredient for pisco sour, Chile’s (and Peru’s) national drink. There are quite a few distilleries around Vicuna and in the valley, some industrial-size, and some artisanal – which means small-scale, big price. We leave the industrial-size for some other time, and visit two of the small-scale ones, Los Nichos and Dona Josefa, outside the village of Pisco Elqui. Until 1939 Pisco Elqui was called La Union, but to counter Peru’s claim to exclusivity of the drink’s name, based on a town called Pisco in Peru, Chile renamed the village and created its own claim. Production of pisco turns out to be pretty simple, really. Let the grapes ferment for a couple of weeks and distil the resulting wine, leave in oak barrels for a while, add water and put in a bottle. Dona Josefa produces 80,000 bottles a year, and sells all of them directly to tourists who come to visit, and buy. 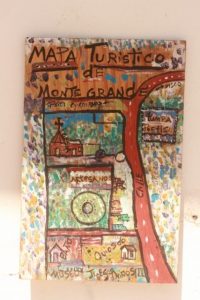 the tourist map, painted on a tile against the church wall – this sums it up 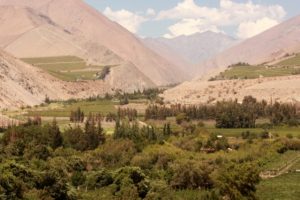 Pisco Elqui is in the Elqui Valley, further east. The valley is extensively cultivated, with various fruit trees, but mostly grapes, which produces a lovely view all along, the radiant green of the grape vines at the valley bottom and a little up the slopes, and the rest just bare, dry rock, with no vegetation whatsoever, except the occasional cactus. Along the valley, small villages like Pisco Elqui provide a low key backpacker tourist environment, immediately reminiscent of Villa de Las Rosas (see the earlier entry on The Sierras, in Argentina). Lots of handycrafts, lots of locally made food, sold on the plazas in front of the small wooden churches. Free-wheeling, aimlessly wandering people. Guitars, singing of folk songs. The distinct smell of marijuana. Hippie-esque, I called that earlier. 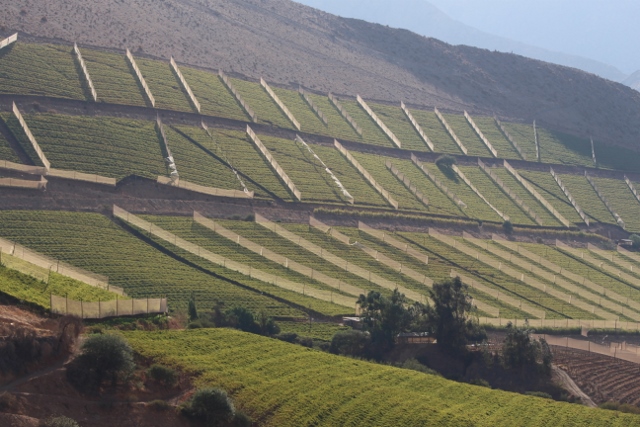 mostly grapes on the valley floor, and on the lower ranges 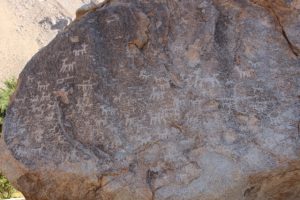 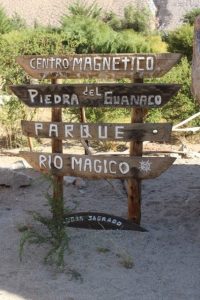 in the magnetic centre of the earth, through which flows the magic river 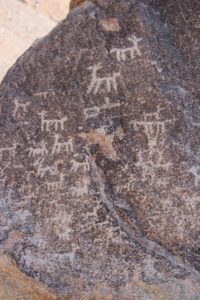 the guanacos in a bit more detail, the top ledt of the rock 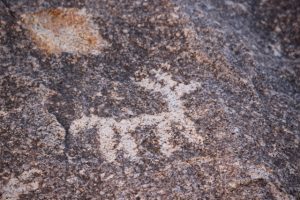 and this shows the scratching technique used

In a little side valley, that of the Cochiguaz River, there is even a real hippie commune, founded in the 1960s by a group of then young people who were convinced that in the Age of Aquarius the magnetic centre of the earth had shifted from the Himalaya to the Elqui Valley. Really. They renamed the river the Rio Magico and the valley the Valle Mistico. Really. I am sure your Spanish is good enough for this. To our surprise we also came across a large rock with petroglyphs, full of images of guanacos, an indigenous lama-type animal. The images are pretty basic, and I wouldn’t have been surprised if they actually date from the establishment of the commune, but apparently they are really old. And thus serve as spiritual anchor for the commune – on the internet I came across pictures of mass worshipping and the like, but we didn’t see anybody else ourselves. 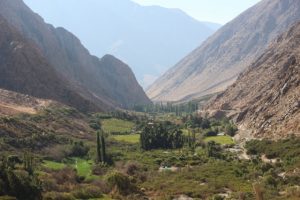 this is the Mystic Valley of the Magic River

On the way back we finally found some place where they do the right things with grapes. A winery, indeed. Caves de Valle, at 1800 meters claimed to be the highest in Chile, was established some 25 years ago by a geologist, who decided on a career change – where have I heard that before? –  and has been making wine ever since. Of quite acceptable quality, to the effect that we even bought a bottle, a rare Malbec in Chile, which we consumed the same evening. End good, all good.

But there is more to come on Vicuna… 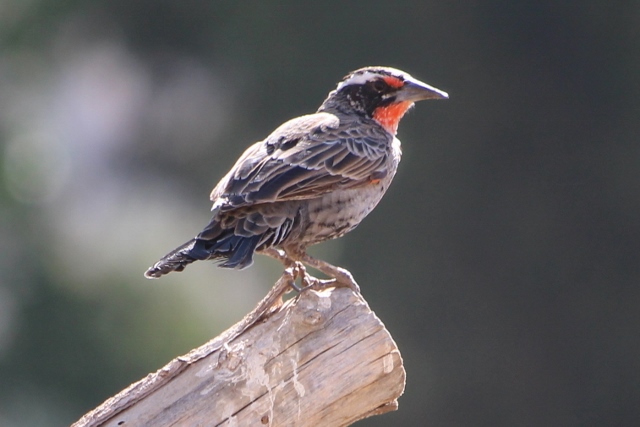 and there is even some bird life