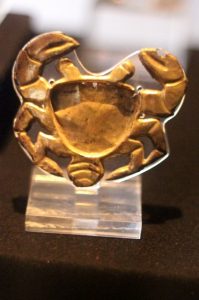 one of the most pleasing things of this trip: the universal respect for the crab

A few random observations – and personal interpretations – about Argentina, Chile and Peru, to wrap up this travelogue.

Having come to the end, the beginning of our first substantial Latin American journey, four months ago, seems very long ago. Of course, the first month, or so, was dominated by family and friends’ matters in Argentina, a country well known to us. Moving to Chile, we immediately noticed the big differences between the two countries. Chile was so much better organised, more disciplined, and the people seemed so much less divided than politically polarised Argentina. Also, Chile seems much more efficient, more hard-working, too. A potential explanation (mind you, in the world according to me)? Argentina has mostly been populated with Southern European – Spanish and Italian – immigrants, who were predominantly making a living in agriculture. Chile began stimulating immigration much later, and attracted Germans and Brits, not only in their armies, but also in industry and trade, and exploitation of the mines and associated ports and railways. 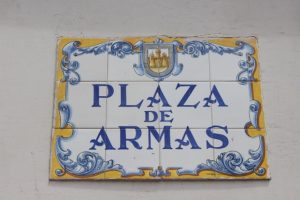 another constant: every town and village in Chile and Peru has a Plaza de Armas

But as soon as we got to Peru, we realised that Chile and Argentina are actually very similar; Peru is really different. Firstly, of course, because it is far less organised and far less disciplined than either Argentina or Chile. Peru is much more chaotic. There no respect for queues, everybody will try to get in front. And there is no respect for traffic rules, despite tons of police officers, all armed with whistles. The whistle is the most important piece of equipment of the police officer, or guard, or anybody with some perceived form of authority in Peru, and is used almost constantly, without any apparent reason. I have stood next to a policeman, who looked around, blew his whistle forcefully – always forcefully -, and then walked away again. Of course, when I was innocently climbing a pyramid in Chan Chan, I completely ignored the frequent whistles of a guard trying to draw my attention, hoping to get out of sight quickly enough. perhaps not everything is so well organised, but they are working on it 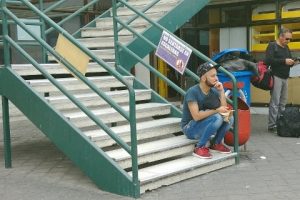 and not everybody is so well disciplined, not even in Chile (the sign reads “don’t sit on the stairs”)

The moment you enter Peru you realise how dominantly white Caucasian Argentina and Chile both are. In Peru the ethnic differences are immediately obvious, with lots of indigenous Indian influences, creating a great variety and a beautiful mix of features. The exception here is Lima, which is pretty much white Caucasian again – and obviously determines what is shown on Peruvian television, which is equally white Caucasian, non-representative. The spin-off of this diversity in Peru is that we encountered, in various places, people in traditional outfit, colourful dresses for the women, mostly, but also men in traditional cloths. And not in the least: the conspicuous white top hats around Cajamarca. In Chile the only colourful outfits were worn during the Arica carnival, or sold in tourist stalls. Incidentally, Chileans do dress more formally than Argentinians: where I finally got used to wearing shorts in Buenos Aires, like everybody else, I quickly had to adjust again to long pants in Santiago – like everybody else! 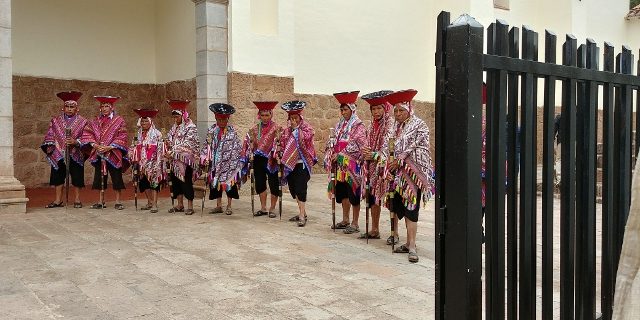 the men in traditional, ceremonial clothing 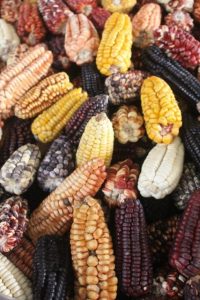 the advantage of indigenous: lots of different colour maize 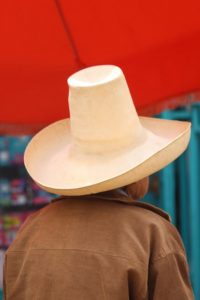 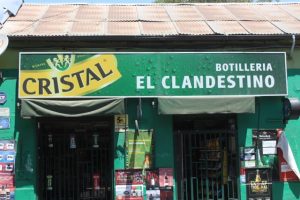 One of the things we were concerned about was the crime reputation of Peru, stories of muggings and robbery, often accompanied by the threat, or worse, of knives or guns. Yet, we never felt uncomfortable, or unsafe, during our entire trip. This was, of course, helped by applying common sense, avoiding dark alleys after dark and run-down neighbourhoods without people, but you would do the same in Amsterdam, or any other big city in the world. 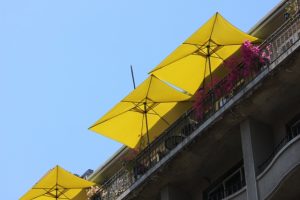 People are mostly not overtly friendly in Peru, neither are they in Chile. And if they are, it has taken them a while, they need to get to know you first; although in smaller towns and villages, and especially in the Amazonas area, the people are more forthcoming. Also, in Peru there are no give-aways, nobody will offer you something to try, nobody will spontaneously share something with you – how different from Southeast Asia, for instance, or the Middle East. We sat in a taxi, indeed in the Amazonas area, having an amicable conversation with the driver, when he bought a roll of biscuits for the long way back and began eating them, all of them, one by one, without ever offering us anything. Whilst we had bought him water, and shared our bananas with him, on the way out. No sense of reciprocity. But it works the other way too, a Peruvian taxi driver won’t understand why you would give him a tip, he gives you back what you have paid too much. And nowhere – almost nowhere – in Peru have we been ripped off, or did somebody try to overcharge us. In buses we were always asked the correct price, and given money back if we inadvertedly had paid too much. Taxi drivers sometimes tried to ask for an extra sol (which is 30 cents), but mostly charged us the standard fare. Tips in restaurants were gratefully accepted, as if they were unexpected; unlike Chile, where the 10% service fee is, although optional, standard added to the bill, and if there is a peso missing, you will be interrogated about the reason why. Everybody in Chile wants a propina – a tip -, for whatever they have, or have not, done for you, which becomes irritating in the end, a form of begging, almost, from people with a regular job.

Talking about begging, the veneer of affluence and respectability is cracked at night, in the big cities in Argentina and Chile, by the many people sleeping on the streets and in the parks. In Peru begging is more commonplace, it is a poorer country, and some of the elderly and disabled have no other means. A notable group of beggars were Venezuelans, who had escaped the misery in their own country. And here the Argentinians, Chileans and Peruvians were united: the Venezuelans were the bad guys, responsible for all the crime and everything else that was wrong in the country – not different from blaming  foreign minorities in so many other countries. Yet, especially in Peru most waiters and bar tenders, and many shop assistants, were from Venezuela. 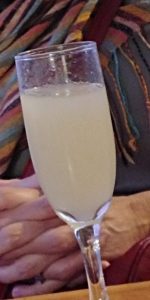 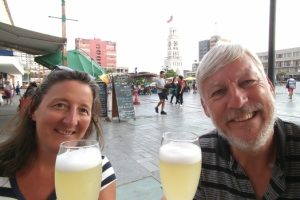 and the ever-present consumers

We cannot not comment on the food and drink, of course. The prejudice against Chilean wine is actually correct, Argentinian wine is generally better – or maybe because we are used to it. Peruvian wine I have already discussed, too sweet. The best pizzas and pastas? Also Argentina, with a much higher content Italian immigrants. Choosing between pisco sours is more difficult, both the Chilean version as well as the Peruvian version have their advantages, the Chilean pisco perhaps better than the Peruvian, but the Peruvian cocktail superior. And the Peruvian food, much better and much more varied than the food in Argentina or in Chile; great ceviches, great stews, and really, some of those 3000 plus potato variations are definitely tastier than what we eat in Europe.

I have lots of other observations, of course. About the lack of trust in Argentina, and in Chile, too, where supermarket customers are not allowed to weigh their own vegetable purchases for fear of cheating, and where you pay with credit card and pincode, but are also asked to sign the credit card slip. Rather excessive, in my view. About the Peruvian bus system, which requires you to register with your passport if you want to buy a ticket at the terminal, even for the smallest of minibuses, which subsequently, 500 meters outside the station, picks up any passenger along the road, completely anonymously. Why bother, in the first place? Or about the noise in Peru, where every taxi, every moto-taxi, drives through the street constantly blowing his horn – if he is empty, to attract potential passengers, if he is full, to attract the attention of friends and acquaintances in the street, to which he can wave and show how successful his business is. And all other cars, who think that by blowing their horn they can miraculously solve a traffic jam, or make a traffic light go green. But I have to wrap up this blog, having come to the end of our trip. 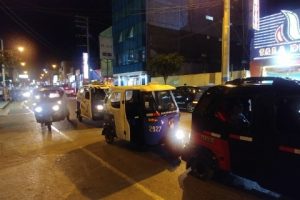 and more of the same

Going to South America, as a travel destination, was a great experience. Not in the least because we both speak the language – my travel companion a bit better than I do, but even she was sometimes lost in Peru; never realised that there were so many differences between the same language in different countries. Speaking the language means that you are not dependent on English-speaking locals, like we had in Iran or Vietnam or most other countries we travelled. Even though we spent almost four months traveling, we still haven’t seen everything there is to admire, sometimes because the weather played havoc – many of the planned Chilean Andean activities we had to skip because of floods -, and at other times because of unwilling customs officials, or striking truck drivers. Or just because we ran out of time: there is so much to see, especially in Peru, that one has to make choices. Who knows, we may be back before long. After all, South America is much bigger than just the South Pacific Coast and its Andean edge we explored this time. 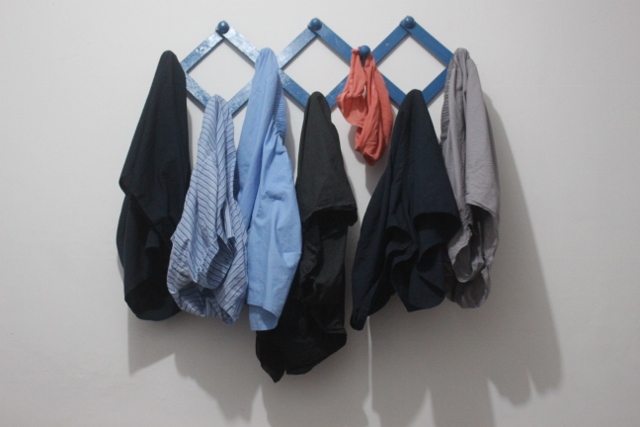 a piece of art…

One Response to 66. looking back