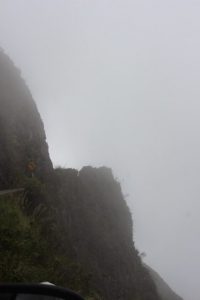 the road to Cajamarca, for most of the way a narrow ledge between the steep slope on one side and the abyss on the other

To get to Cajamarca, back on the other side of the Andes, takes us a day, and because of the weather, we don’t see a lot of the apparently beaytiful countryside.

The transport problem – because of the road floodings between Chachapoyas and Leymebamba – keeps on haunting us. For our travel onwards, to Cajamarca, we are once again dependent on buses from Chachapoyas, and there are currently very few coming through, at very unpredictable times. We decide to hire a taxi for the eight-hour drive, also because that way we can best enjoy the spectacular views along the road, or so we are promised by guide books and everybody working in the tourist industry. 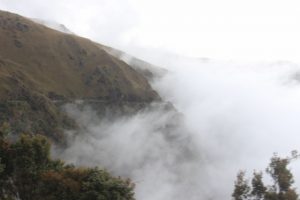 also, mostly mist along the way 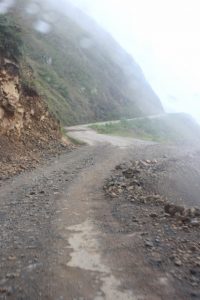 which also affects the the road views 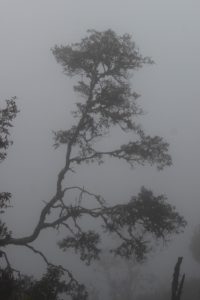 When we leave at eight in the morning, it is raining. Buckets. But once we are climbing, from Leymebamba’s 2000 m to cross the Calla Calla Pass at 3600 m, about an hour later, the rain stops. We are now driving through dense fog, instead; so much for the views. Once again, I wouldn’t think that there are many people living here, so high up the mountain. But then our driver stops, in the middle of nowhere, blows the horn a few times, and out of nothing – well, out of the mist – comes a man towards our car. To pick up some batteries that the driver had brought him from the village. There is little else to tell about the next few hours, as we see preciously little of the countryside. Just as well that this is called the cloud forest! Except that the road is in horrible condition, frequently potholed, or all together without hard surface, and in many places really not more than one lane wide; luckily, we don’t meet a lot of traffic. Luckily, too, we mostly cannot see all the way down, down the steep abyss! No guard rails, no nothing, I wonder how often people drop over the edge here. The only highlight is coffee at Dieguitos, a small restaurant in the middle of nowhere. 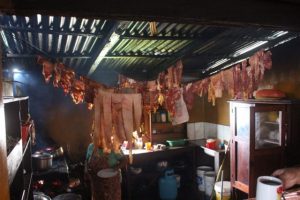 restaurant Dieguito, and the kitchen, full of meat drying 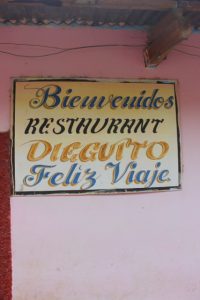 the highlight of the first part

The fog only clears, once we get close to Balsas, at about 850 m altitude on one of the main rivers, the Maranon River. In the process, the scenery has changed again, from the cloud-forest of the Amazonas Region, to a much dryer country side, with the return of cacti. We have crossed the Andes once again, back to the Pacific side. Unfortunately, the views don’t last. Long before we reach the next pass, only just under 3000 m high, the road and everything around us is shrouded in mist again. It is not until we get to Celendin that things get better. And flatter, too. Gone are the steep mountains and deep valley that so characterised the central part of the Andes, in come more gentle folding landscape, Switzerland-like once more. 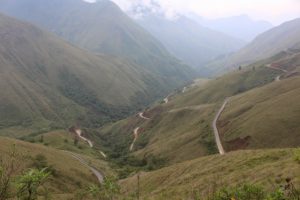 the road, going down 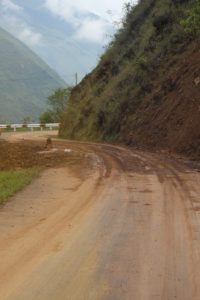 and this is the road surface, often enough 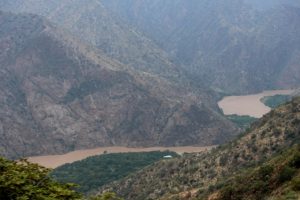 view of the Maranon River, near Balsas 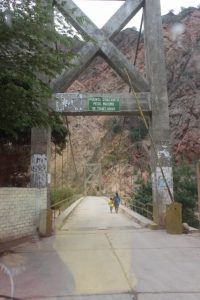 the bridge acrosss the river, for the time being 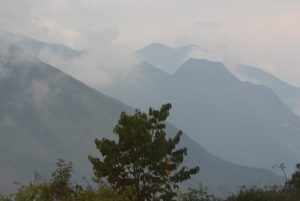 not much of a clear view on the way to Celendin 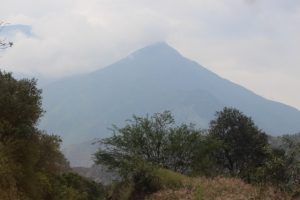 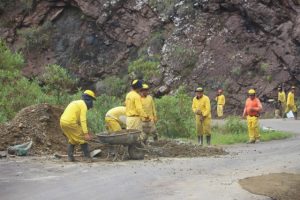 past Celendin, the road gets better 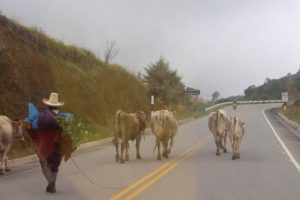 also with a lot more traffic 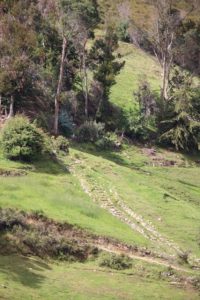 so once in a while, an Inca trail crosses our path 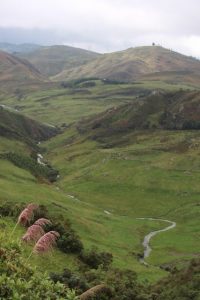 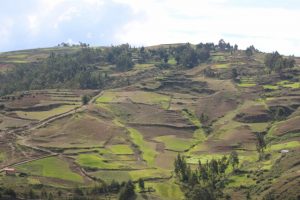 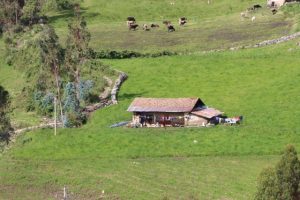 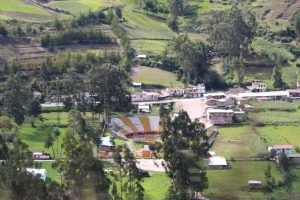 some villages have bull rings, which, apparently, are still actively used

Celendin, apparently, is famous for the production of oversized wide-brimmed hats, and indeed, these are very popular, amongst both men and women. In fact, all the way to Cajamarca, the hats are a feature of the landscape, and of every little village in between. I am almost tempted to buy one.

For the last two hours, to Cajamarca, the road is better, two-lane and asphalt. Which prompts the Peruvians immediately to overtake each other again, at neck-breaking speed, irrespective of whether they can see, or not, what is around the next bend in the road. Perhaps the single lane version, with or without guard rails, is a better solution for this country, after all. 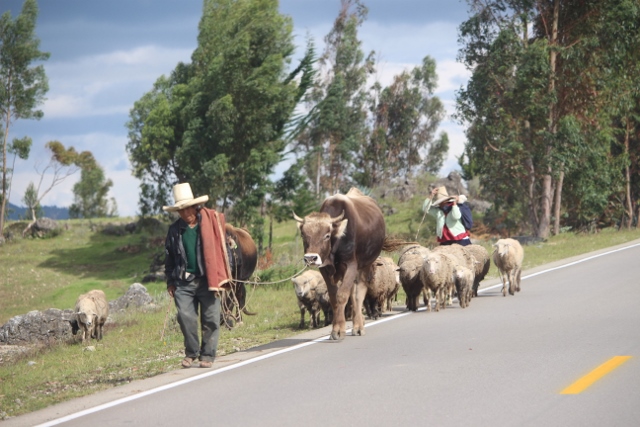 a family on the move