21. Ovalle and the Hurtado Valley 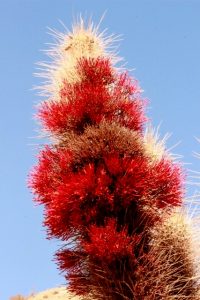 blooming cactus on the way to Hurtado and Ovalle

A beautiful drive through the mountains and the Hurtado Valley, covered with blooming cacti, an interesting Valle del Encanto with petroglyphs, and disappointing Ovalle

The road to Ovalle, or at least the one we choose, leads through the Hurtado Valley, starkly contrasting with the earlier Elqui Valley. No lovely little villages here, no soft-green plantations. A rough road – suddenly we are quite happy with our 4WD camionetta – leads up several valleys, across a few low passes, into what ultimately becomes the valley of the Rio Hurtado. Initially there still some grapes around, but soon we lose all of the vegetation… except for the cacti! Many of which are adorned with big bunches of bright red flowers. Others are faintly yellow, or carry fruits. I love these cacti, in the wild, and this collection, kilometre after kilometre, is a truly fabulous sight. 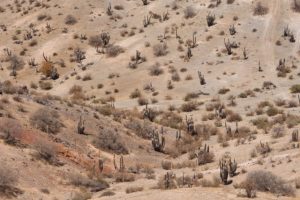 the vegetation, low scrub, and cacti as far as the eye can see 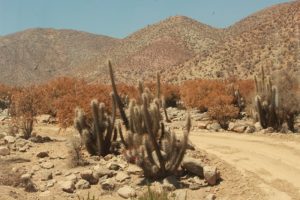 bare mountains in the distance, cacti in front 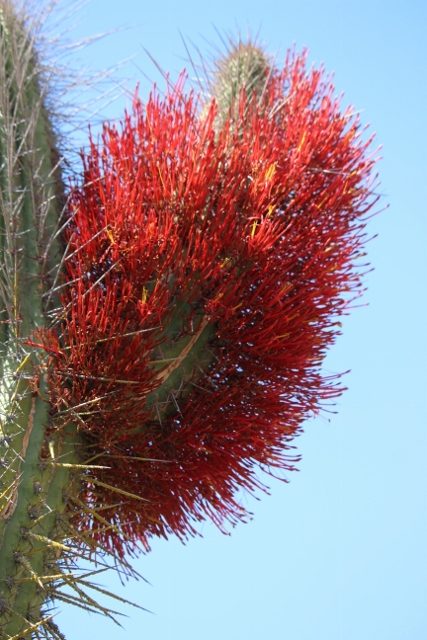 and how about this for flowers? 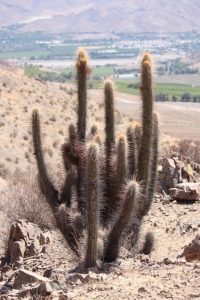 another cactus, with yellow fruits at the top 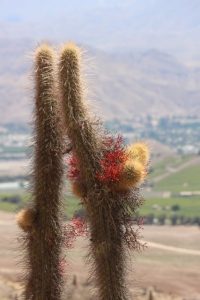 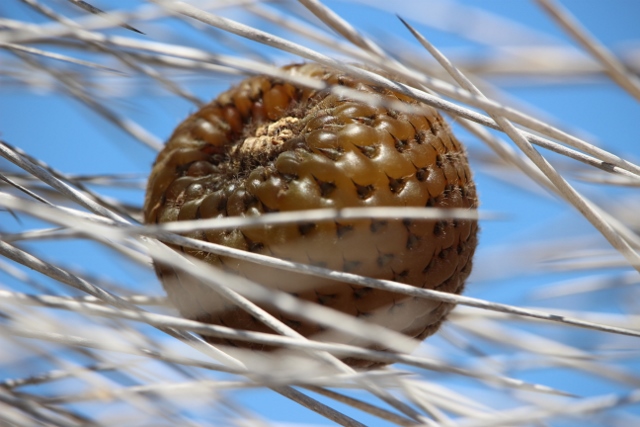 a fruit hidden behind the spines 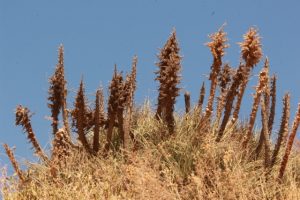 an other type of plant, also looks cactus 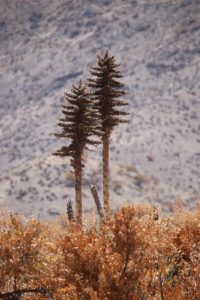 and this tree-like thing, whatever it is 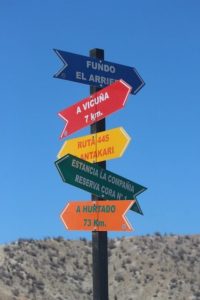 in the almost colourless desert, a bright signpost 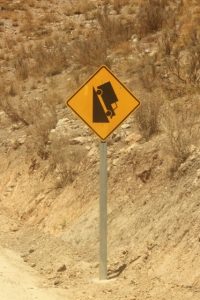 this is indicating a very steep slope indeed! 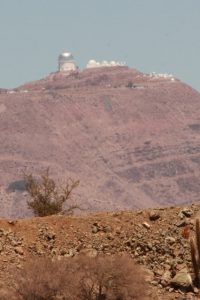 this is a bigger observatory, it looks 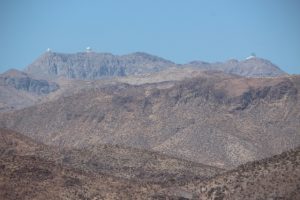 absolute nothingness – except for the observatories 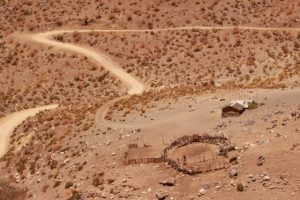 Very occasionally, we see signs of life. More observatories on the top of the hills, a forgotten farm, or a direction to a distant hacienda. But mostly, all around us nature, no signs of life. It is not until the village of Hurtado, a sleepy place of some 400 inhabitants, that we feel that we are back in the world again. Not in the least because the charming little churches we know from the Elqui Valley start appearing, too. 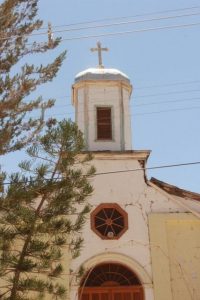 the main church of Hurtado 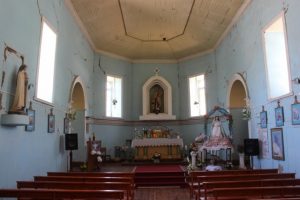 inside needs a bit of work 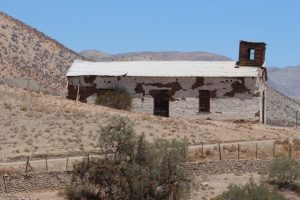 another church, unused now; I think it is called Seron 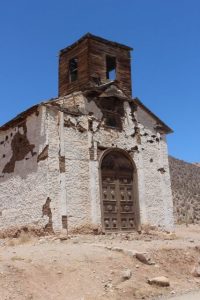 front view of the same church 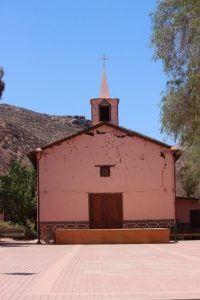 and this one, too, is in the valley, and may be called Samo Alto

Our luck hasn’t been restored entirely, yet. Arriving in Ovalle, we find that we have a flat tire. And it is Sunday, the day that all the restaurants are closed in the evening. The next day, the museum, for which we came here, is closed – every Monday every museum is closed. The other attraction in town, the much heralded Feria Modelo, an iron market said to be the biggest fresh produce market in northern Chile, is a big disappointment, too. The building is from 1986, not very old at all, and the market itself is not very busy, and quite well organised, and thus has no atmosphere to talk about, let alone it being photogenic. 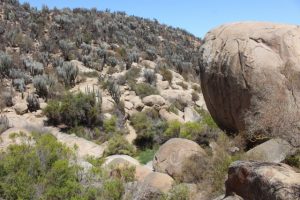 the rocks in the Valle del Encanto 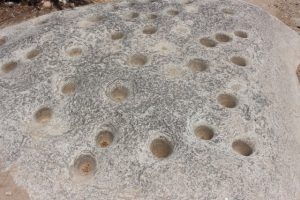 some of which have lots of holes, perhaps even in patterns 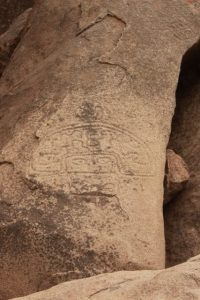 but we came for the petroglyphs 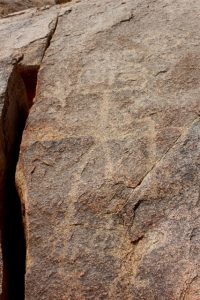 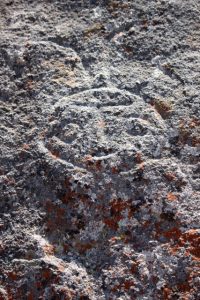 others deeply carved in the rock 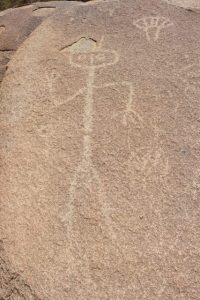 this is part of a larger frame

We decide to leave Ovalle, and treat ourselves to a stay in the Hotel Thermas de Socos, in a village a little further. On the way, we stop the small Valle del Encanto, where a collection of ancient petroglyphs has been found. We scramble over several rock outcrops, and indeed find a number of, well-signposted, petroglyphs, mostly geometric forms and stylilised human heads. Quite different from the guanacos of the hippie establishment earlier, these are firmly assigned to the El Molle culture, an indigenous society who lived in the area around 500 – 700 AD – altogether no so very old, I think, compared to other petroglyphs in the world. A noisy guide tries to convince me that the holes we see in several of the rocks were used to grind maize, but also for star-gazing and producing halogenic substances. Hippie culture, after all? More disturbing are the few other visitors to the site, either with screaming and nagging children, or with a loudly music-playing telephone to accompany their walk. Welcome to nature, anybody?

How contrasting then is the thermal spa, the Hotel Thermas de Socos. We are two of seven guests in total, we have the pool for ourselves, and the signs warning everybody to respect silence between 14:00 and 16:00, the time for siesta, are unnecessary today.

next: heading further north to Chanaral 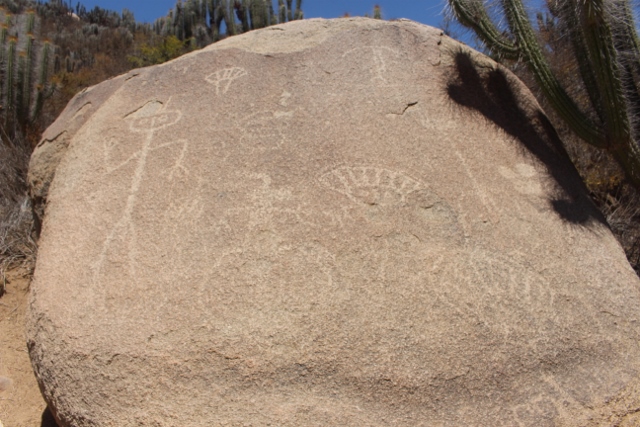 which shows the scale of things