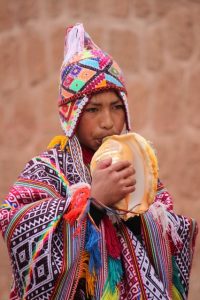 A small village at the beginning of the Sacred Valley, Pisac has an impressive Inca fort, and lots of colourful people in the traditional as well as the alternative sense. 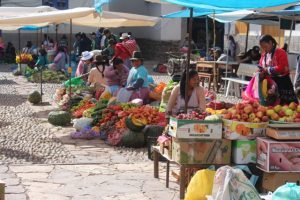 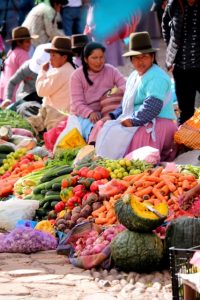 and some of the women sellers 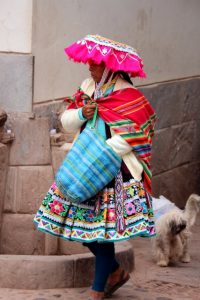 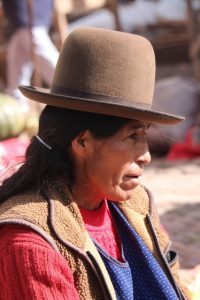 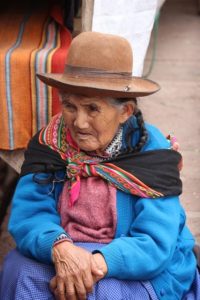 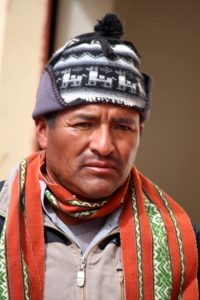 men, too, have dressed up but women steal the show 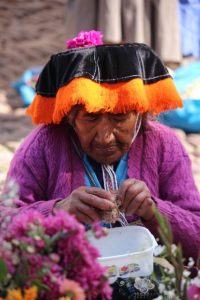 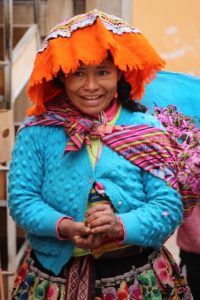 or just having fun

Our guidebook says that during the week Pisco is a small sleepy village in the Valle Sagrado, the Sacred Valley, but on Sundays the place comes to live thanks to the huge, colourful market, that attracts people from villages in the wide surroundings. So we have planned our travels such that we are in Pisac on Sunday morning. Where we find most of the Plaza de Armas given over to souvenir stalls, and only a small part set aside for some women selling fruits and vegetables. Very disappointing, although some of the women do sport traditional dress, which is colourful indeed. 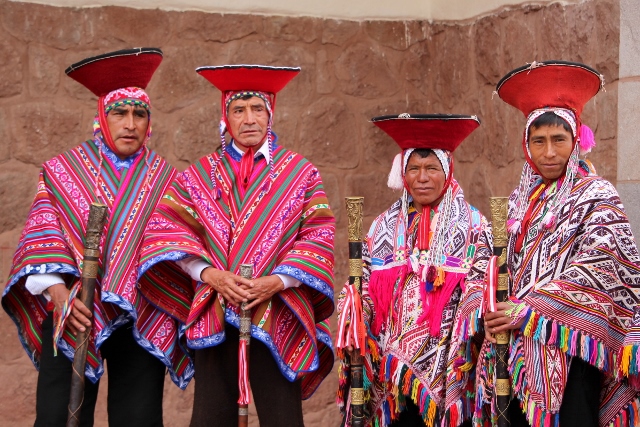 and elders they look, in front of the church 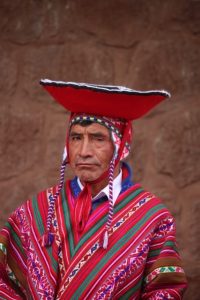 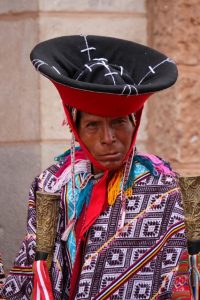 with hat and leader’s staff

However, at around 11 am a group of men and boys, also traditionally dressed, the boys playing the conch, the men wearing a staff symbolizing their authority, march through town, on their way to the church. This is a weekly ritual – not sure how much focus on tourists there is, they do collect donations – where the leaders of the indigenous villages come together for mass in Quechua, the local Indian language. They line up in front of the church for a very long time, and the interest of the tourists quickly disappears again. 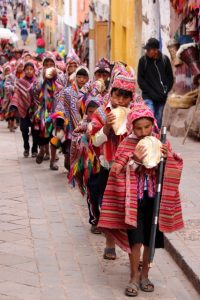 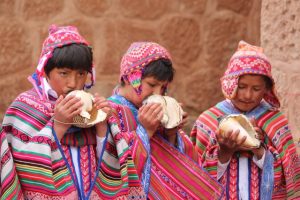 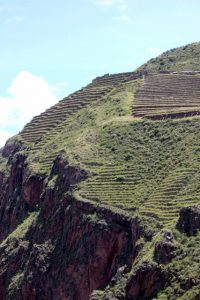 steep terraces below the Pisac fort 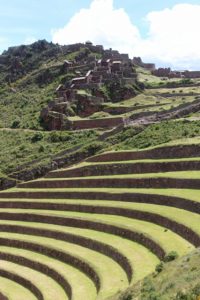 military buildings in the back 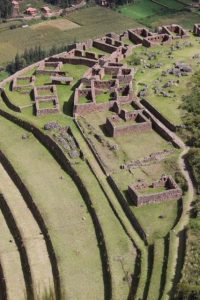 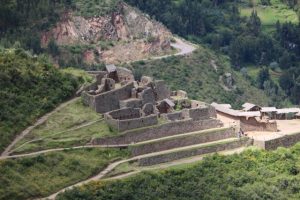 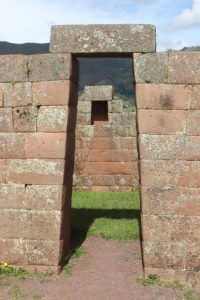 and a temple, recognisable from its perfect stone wall 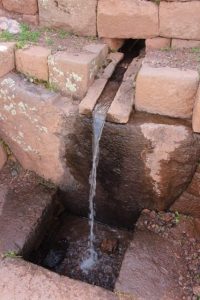 Luckily, Pisac also has extensive Inca ruins – oeps, archaeological sites, I mean. We have ourselves dropped at the top, where we enter the site through several military buildings, the highest of which is at around 3400 m. In the opposite mountain side are the graves of around 1500 Incas, in man-made caves and closed-off alcoves, all severely robbed – and off-limits to tourists. Over the next four hours, or so, we walk down to the village again, which is 400 meters lower, passing many other Inca structures, and looking out over extensive Inca terraces, which were watered by an intricate irrigation system, some of which is still operational. Lots of exotic plants and flowers line the way, too, and slow our progress. At one point the path is closed, which would have forced us to backtrack quite a bit, but with some goodwill – mostly from ourselves – we manage to bypass the obstruction and continue our walk. A relief from the busy Cusco experience, as except in the upper area, there are not that many tourists here. Especially past the obstruction. 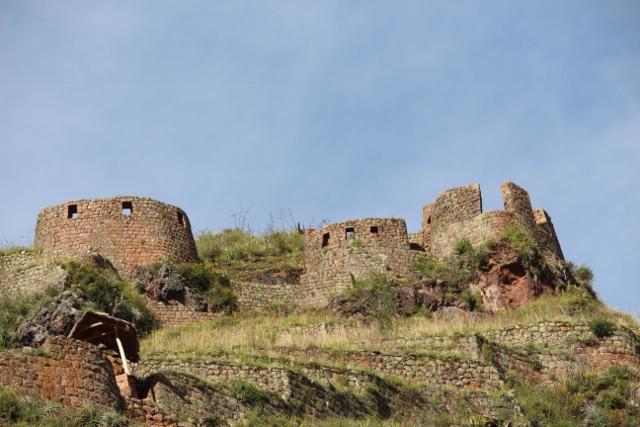 and some distant defense works 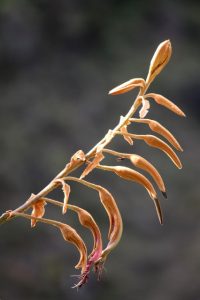 some fauna along the way 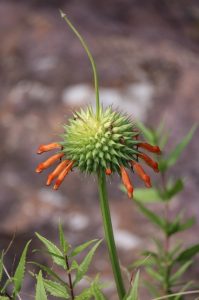 and a beautiful flower 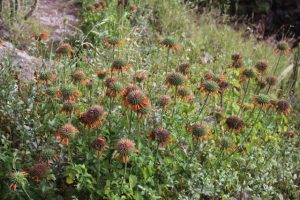 not alone in the field

Back down in the village, we actually regret that we need to move on the next day. Pisac is a lovely place, cobbled streets and all, and has a colourful crowd. Not only the local market women, but there is also a large contingent of foreigners, apparently living here, who, let’s say, have embraced the local culture in their own way. We would have called them hippies, in the past; there are special sessions, magic assemblies, and quite a lot of hallucinogens being used, the mildest ones derived from the San Pedro cactus leaves according to, no doubt, ancient Inca recipes. No need to mention that the crown is dressed appropriately, some with rainbow-coloured hair, others with long, flowing dresses, feathers and flowers in their hair. Afterall, Pisac is at the beginning of what the Incas called the Sacred Valley, although presumably for other reasons. I wonder what the Peruvians make of this. 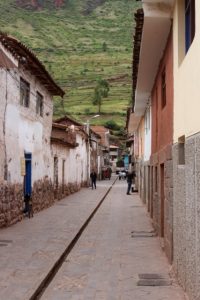 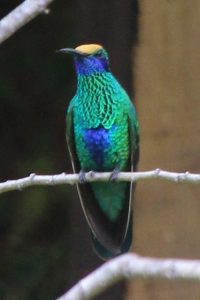 The need to move on – after all, we haven’t got all the time of the world! – means that we, unfortunately, miss much of the magic. 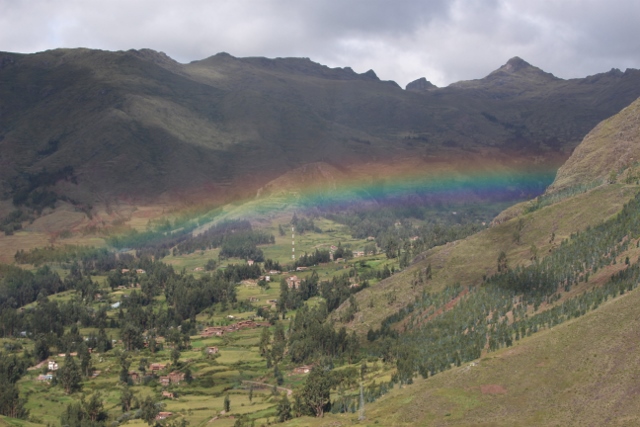 the rainbow fixation of the hippies is based on something real, afterall