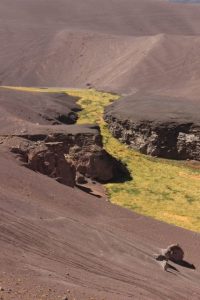 some rare vegetation in a valley towards the Paso San Francisco

Despite a set-back, we drive up the increasingly scenic Paso San Francisco, on the way to Argentina, only to experience the next set-back.

Our luck seems to be running out. We will have to shelf the idea of crossing the Pircas Negras Pass – a pass which is only open in (Southern Hemisphere) summer -, because of bad weather. In summer!

But there is another pass, Paso San Francisco, a little further north. It means a longer drive on the Argentinian side to return to La Serena, but at least we can complete the idea of a clockwise loop. And this pass is open, according to the carabineros, who add that we need to be at the border by one o’clock latest, afterwards they don’t let anybody through anymore. The two border controls, Chilean and Argentinian, are about one-and-a-half hour’s drive apart, one on each side of the pass. 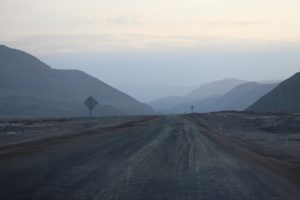 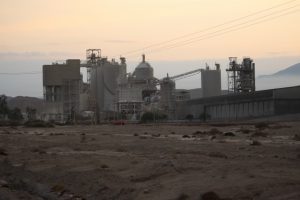 the mining activities don’t add much to the colours

We leave early, with the jerry can, water and food within reach, just in case! The weather is lousy, it is overcast, and for the first hours everything is grey. The road, unsurfaced, follows the valley of the Copiapo River, which is straight, and boring. Yet, we are gradually climbing: popping ears. Every few kilometres there is another turn off, to another mine, and the only traffic is mine-related, sturdy pick-up trucks that put our small sedan to shame. until the sun breaks through… 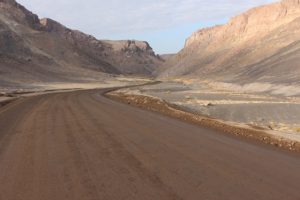 and everything looks a lot brighter, suddenly 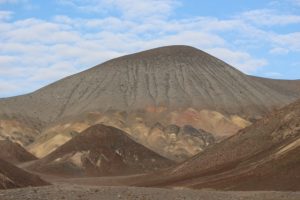 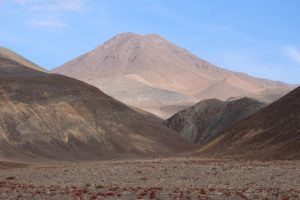 the shape of a volcano, perhaps? 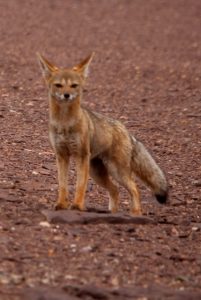 a curious fox hopes to get fed 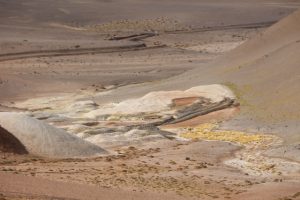 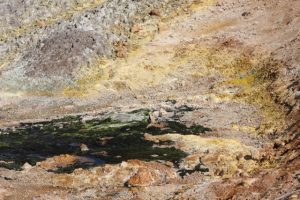 being won commercially, it seems

It is only when the sun comes out that we start appreciating the landscape. Still no vegetation to speak off, except in the occasional valley which supports a little water. But the rocks are taking on their true colours, red, green, yellow, grey and black. There are Salinas, extensive salt flats, there is Laguna Verde, a high altitude lake on the Chilean side, there are flamingos, even foxes. Past the Chilean customs post, which we clear in no time, we enter the area of the true mountains, the higher peaks, snow covered. Amongst them, the highest active volcano in the world, 6893 m Ojos de Salado – cloud covered, unfortunately. But spectacular landscape we have, and it takes us much more than one-and-a-half hours to reach the Argentina customs. Through which we expect to breeze through, as well. 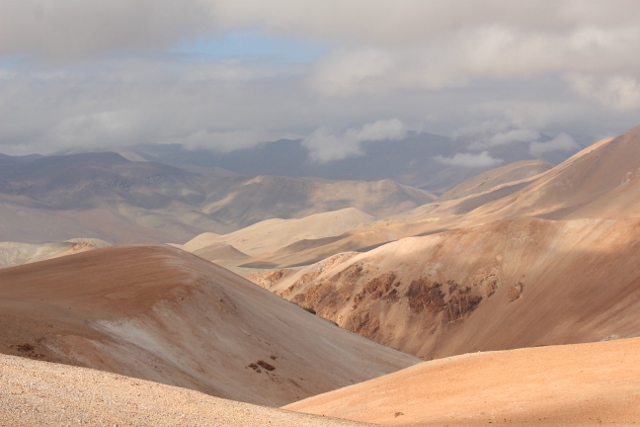 we are getting higher, obviously 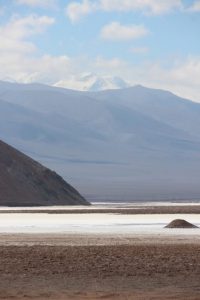 the first snowy tops, above the salt flats 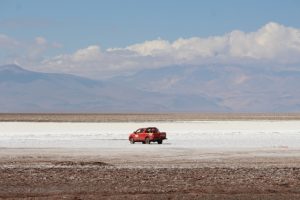 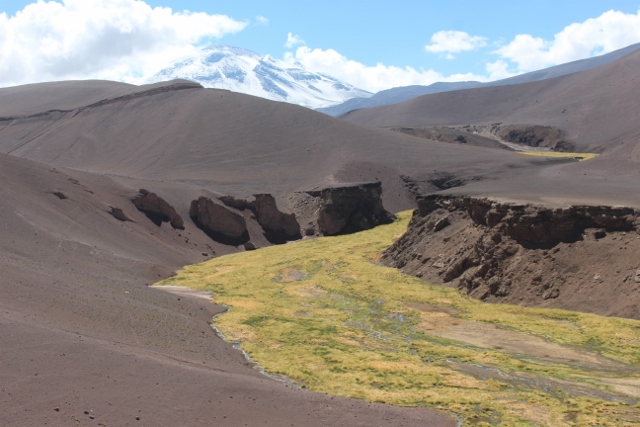 snow, desert and greens in one view 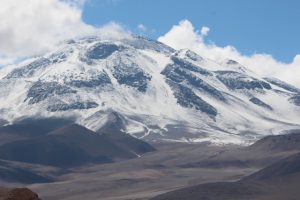 one of the snow covered mountains on the way 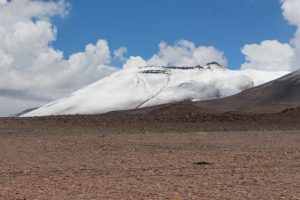 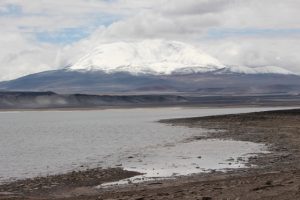 Laguna Verde, in between customs posts 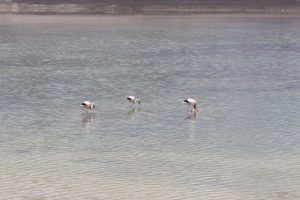 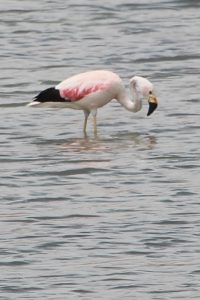 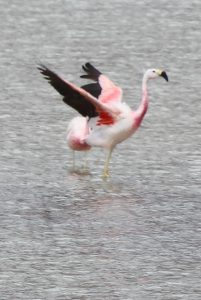 ready to take off 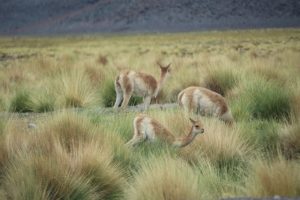 near the Argentine customs office, guanacos

Hmm, not so quick. Although we do have an International Permit from the rental agency, the Argentine computer system doesn’t recognise the permit number. Whether that means that the car is not properly registered for international crossing, or whether the Argentine internet connection has broken down just now, so that their system wouldn’t have recognised any car at all, we will never know. That they could, in the past, in such a situation manually enter the permit in the system, but that from 2019 onwards they are not allowed to do this anymore, doesn’t help either. Long story short, we can not cross the border with our car. We have to go back to Copiapo.

Our luck seems to be running out. 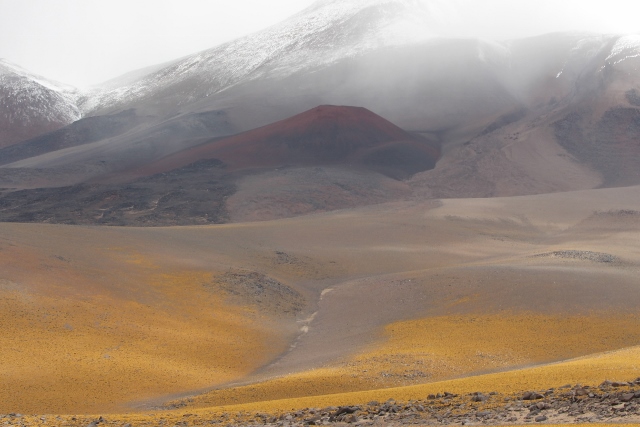 at the foot of the cloud covered Ojos de Salado 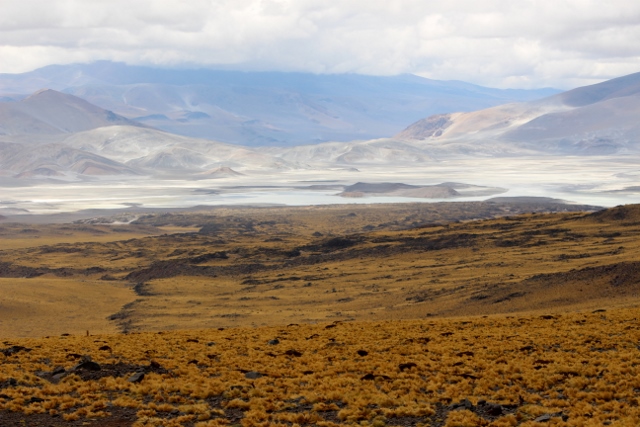 and another view of the mountains

One Response to 16. the border