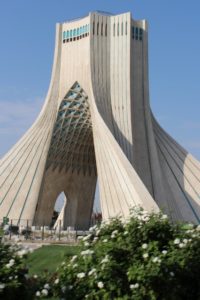 Azadi Tower in Tehran, built in 1971 to commemorate the 2500th aniversary of the Persian Empire

Tehran does have its tourist sites, from bazaars to palaces and museums, although not all are equally fascinating.

Despite Tehran not being very beautiful, there are a couple of sights to visit. The starting point, as so often, is the bazaar, a network of connected alleys, corridors and little squares, sometimes including basements and second floors. The corridors are covered, either by tall, vaulted stone structures, by corrugated iron, or by transparent yellow hard-plastic sheets. Part of the vaulted bazaar looks genuinely old, but is poorly maintained; other sections have been restored, and look relatively new, decorated with shiny new tiles. The corrugated iron and the plastic sheeting looks possitively shaky, as if it could collapse anytime, but nobody seems to be bothered. 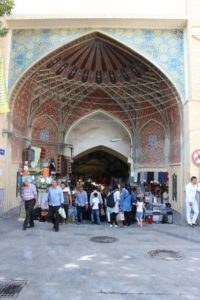 the entrance to the Tehran bazaar 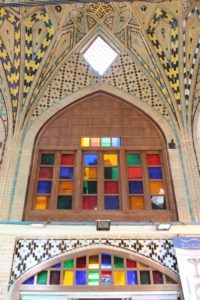 vaulted structure in the bazaar, and stained glass windows 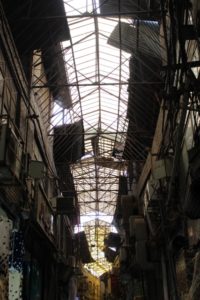 another form of cover in the bazaar 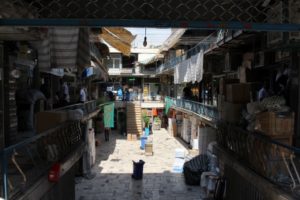 one of the little open squares in the bazaar, with three levels of shops 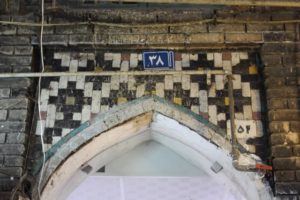 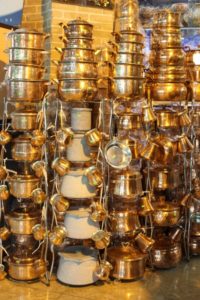 copper ware displayed in the bazaar

We wandered around for a few hours, and encountered mostly cloths, once again arranged by sort: shoes alley, bras and underpants corridor, etc. Not very photogenic, and in all honesty not very interesting either. Despite there reputedly being more than 4000 carpet dealers, no one approached us – the only tourists, as far as we could see -, and we failed to locate any of them. Which is perhaps for the better, even though we didn’t have any plans to buy…. The spices bazaar proved to be a narrow and remarkably short stretch, mostly selling nuts. Fresh produce, usually the most colourful element in a bazaar? None of it. Perhaps we were unlucky, or maybe we have already seen too many other bazaars, and we are just spoiled. The one element of Tehran’s bazaar that I didn’t like, is that the alleys and corridors are not only full of people – that’s OK, that just creates an atmosphere -, but also full of handdrawn carts, moving with great speed, and little concern for the haphazard tourist who wants to take pictures. 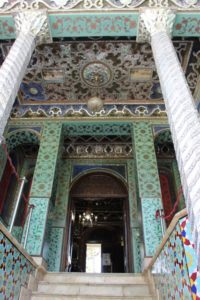 one of the building entrances in the Golestan Palace

Close to the bazaar is the Golestan Palace, touted as the prime Tehran tourist spot, the highlight of the city, but in reality once again somewhat disappointing. Of course, it is a splendid selection of buildings, but it is drowning in an overdose of tiles: too many colours, to many different patterns, geometrical, flowery, but also with scenes of daily, and Royal life. Beautiful marbles, beautiful mirror-plastered rooms inside, but it is perhaps too much, too ostentatious. 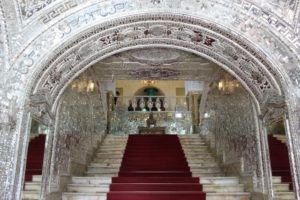 mirror entrance to the main hall of the Palace 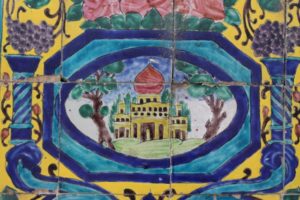 some of the many painted tiles in the palace 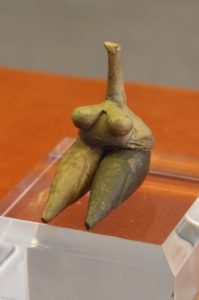 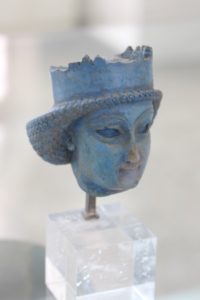 an artefact from Persepolis, in the National Museum

Which cannot be said of the National Museum of Iran, which has a display of archeological finds from Paleolithic times to that of the Sassanid dynasty, halfway the first Millenium AD. What starts as a rather underwhelming series of flints and bone pieces quickly develops into an fabulous array of painted pots, water jars, utensils etc., culminating in examples of Luristan Bronzes from west Iran and stone friezes from Persepolis. All beautifully presented, and with English explanations provided. 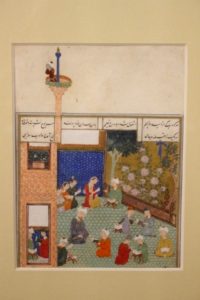 a 15th Century miniature, in the Museum of Islamic Art

The next-door Museum of Islamic Art is another jewel, far more varied than one would have expected – also because the art on display is not necessarily related to Islam, but has been produced after Islam entered Iran in the 9th Century. Once again, pottery, dishware, but also mirhabs that decorate praying niches, and painted miniatures for which Iran was famous. All together an excellent way to avoid the hottest part of the day, when it is easily 38 oC.

Moving from one place to another is easy. There is the metro, incredibly deep in places (think Tottenham Court Road Tube Station in London, and then four times), but very efficient, very fast – once you have descended to the subterranean platforms, which may take a while. The main squares in town are connected by a Bus Rapid Transport system, essentially dedicated bus lanes with dedicated busses that speed from platform to platform; also fast, but incredibly crowded, so much so that you do not necessaily get on with the first bus that passes. Usually not a problem, but because there are separate doors for men and for women, important to check whether we get both on the same bus! Taxis are also quite OK – once you have worked out a mutually agreed, and understood, price with the driver -, although they suffer from the traffic, of course, and can get hopelessly stuck.

To add some fresh colour to our day, we decided to visit the bazaar in Tajrish, a northern suburb from Tehran. Much smaller, of course, than the Tehran bazaar, but here we found our fresh fruits and vegetables, the spices and nuts, and a whole range of photogenic food subjects. 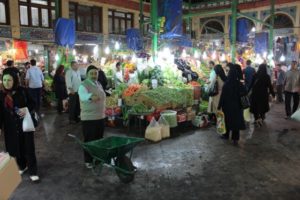 the fresh produce section of the Tajrish bazaar 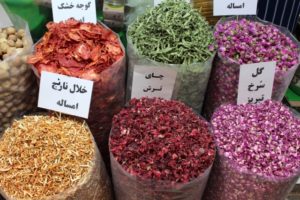 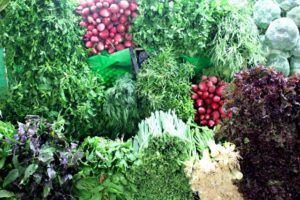 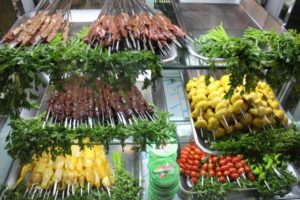 an enterprising kebab shop, with mushroom, tomato and liver kebabs 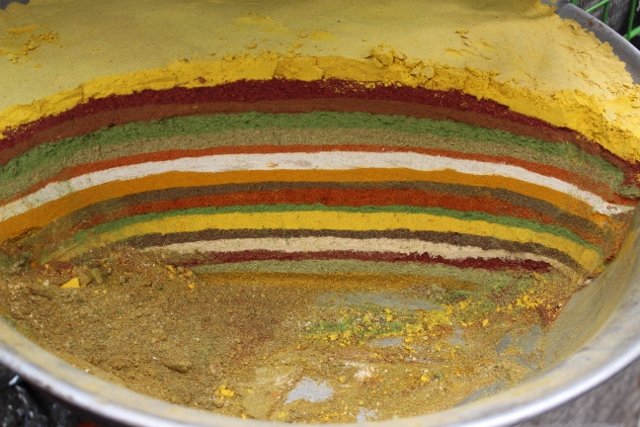 seven spices in the bazaar (or more…) 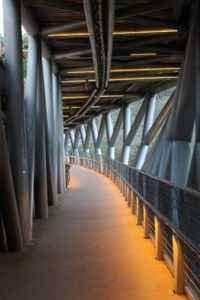 different levels on the bridge 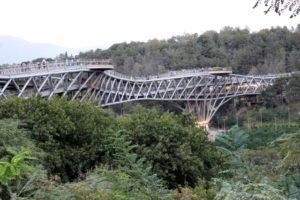 the Tabiat Bridge by daylight

Halfway Tajrish is the Tabiat Bridge, a pedestrian crossing not across a river, but across a highway, connecting two parks on either side. I told you earlier about the importance of parks for Tehranis, but this one beats all others. The bridge, opened only in 2014, is mightily popular, a beautiful design, tastefully lit at night, providing views over the city and over the mountains to the north. Viewing platforms, fast food courts, children’s playgrounds; now what better place for a family outing could you possibly imagine?

next: to Rasht and Masuleh 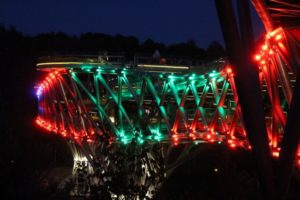 the bridge by night, lit in different and varying colours 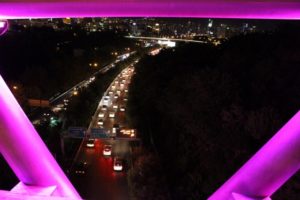 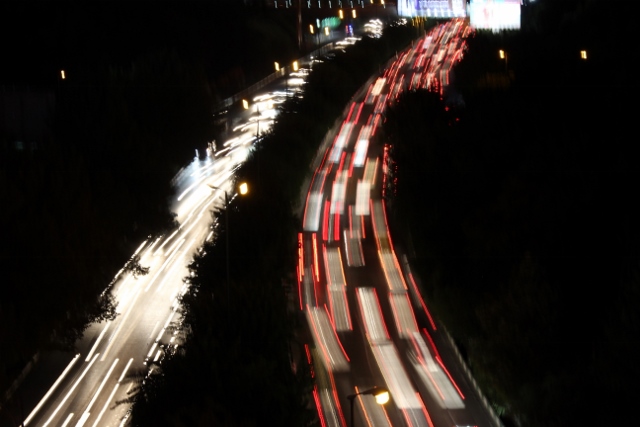