10. the Aras River Valley 12. the road to Sanandaj 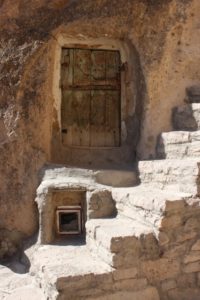 Trogdolyte village Kandovan is a delight, and so was the way getting there and back.

There are quite a few ‘special’ villages in Iran, with or without extensive tourist infrastructure. Kandovan, just outside Tabriz, is one of them, and where Masuleh and Ushtebin disappointed somewhat, Kandovan is very special, indeed. The relatively soft volcanic rock that has been eroded in the form of steep conical shapes against the mountain slope provides excellent material to build your house in, which is what the present village clan has been doing, apparently, for the last 700 years – although the place may have been inhabited for much longer, like, by Adam and Eve; no lack of myths, in Iran. 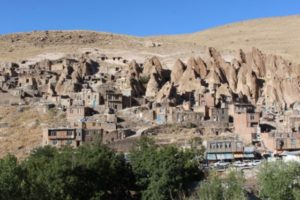 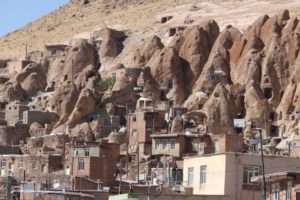 and another view of the village 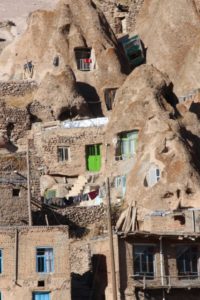 some colourful additions to the rock face 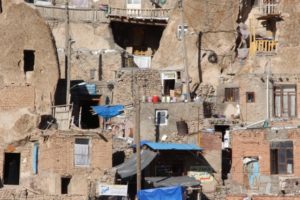 The temptation of apples has since been replaced by those of the tourist trinklets, of which there are plenty around. Some of it originally from the village, like the hand-woven carpets and socks, and the excellent honey, most of it imported to satisfy the hunger of the local tourists, who have arrived in masses. There is something interesting about Iranian tourists, they don’t seem to come so much for the site itself, but more for the opportunity to shop, and take selfies. And to have an alternative for the ubiquitous family picnic, in this case the stream at the bottom of the village. 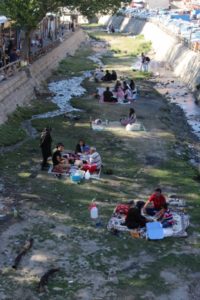 the local tourists all flock to the picnic spaces 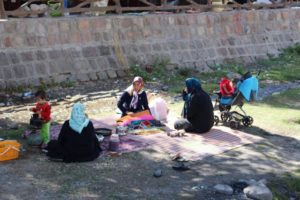 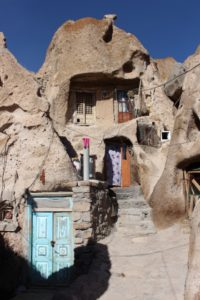 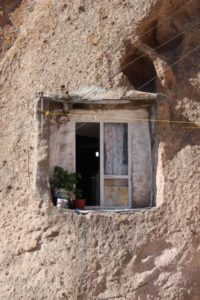 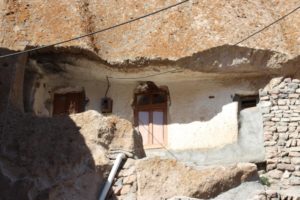 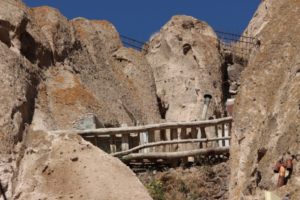 another balcony, and fences to prevent the tourist falling 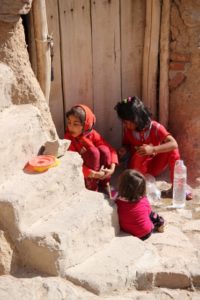 the girls are not distracted by thr tourist anymore 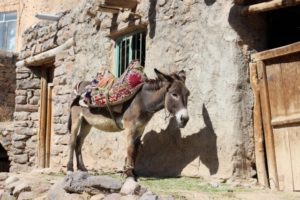 a donkey patiently waiting to be let in 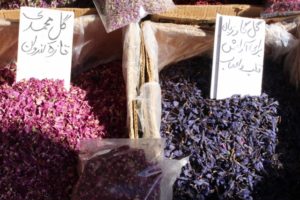 no Iranian village without bazaar, of course 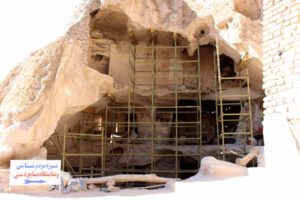 and this is how they look inside… construction still going on

The thing to do, though, is to wander through the village, up the steep steps, across from the cave-like houses and down another rocky path – well prepared, of course, with steps and concrete wherever convenience demands it. Around every corner hides another surprise, a wooden balcony, or an old door, or a donkey waiting to be loaded. The village people: somewhat more colourfully dressed than the average Iranian, especially obvious in the women, but unfortunately very sensitive to having their picture taken.

Oh, and coming and going to Kandovan is a story in itself. Not wanting to rent a car again, but instead opting for the local transport, and the ‘adventure’ of finding our own way, we headed to one of the local bus terminals in Tabriz, only to find out that it had been closed. A friendly man walked us to the main street and waved down – waved down! – the Rapid Transport Bus, and told the driver to drop us at a certain square, where we could pick up a bus in the direction of Kandovan. As is quite customary in Iran, the driver refused payment (it later transpired that we would have had to buy our bus pass outside the bus). At the square, two other passengers got off, too, took us by the hand, almost, and walked us to the bus for Sahand, close to the turn-off for Kandovan. In fact, one of them had to go the same direction, and joined us on the bus. And had paid for our tickets, to the great disapointment of another passenger, who also had wanted to pay, because he spoke a little English, which he subsequently practiced on me for the full half hour it took to arrive in Sahand – except for the moment he called a taxi for us, to wait at the bus stop, and bring us to Kandovan. A smoother ride is hard to imagine! Expecting to be able to pick up a taxi back in such a touristic place, we found out that there are no taxis, in fact. Everybody comes with their own car. But a retired petroleum engineer – we found out later – and his wife offered us a lift to Tabriz, but not after first having emptied the back seats, stacked with things they had bought, and now put in the boot, which thus didn’t close anymore, but never mind, there is always rope. Halfway they stopped at a picturesque spot to take a photo with us. We were just about able to discourage them from taking us all the way to the hotel, which would have got them badly stuck in traffic. Where in the world? And so much more fun than renting a car.

next: the road to Sanandaj