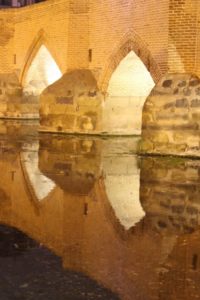 The small town of Ardabil is mostly of interest for its mausoleum of the founder of the Safavid dynasty, and for some restored bridges from that era, but as everywhere in Iran holds some nice people surprises, too.

We are still coming to terms with the internal travel issues in Iran. Going from Rasht to Ardabil, apparently there are no busses; only the direct bus from Tehran to Ardabil passes through the outskirts of Rasht, where they need to stop for a police check. Perhaps we can get on then, if there is space. What time? Hmm, maybe 10 o’clock, maybe 11. The alternative would be to take a savari, a shared taxi, to Astara on the Caspian Sea, and from there another savari to Ardabil.

It was pouring down, when we left. No way I am going to wait for an uncertain bus, that may arrive at any time during the morning – probably later, not earlier -, and may, or may not, have room for us. Shared taxi to Astara it will be. And you know, there is something called ‘dar bast’, litterally meaning closed doors, and then you have the whole taxi for yourself (for which you pay for all other, unoccupied seats, of course). Half-way Astara our driver, a very friendly chap with whom communicating was difficult as he did not speak any English, and we didn’t not know any Farsi to speak of, but who had made very clear that he could only go as far as Astara, not all the way to Ardabil, our driver pulled up at a tea house of a friend who spoke some English. And who casually suggested that our driver could also bring us all the way to Ardabil, if we wanted. OK, sounds attractive, and after we sorted out the extra costs, all of us happily skirted Astara and the Caspian Sea, and continued to Ardabil. By now it had transpired that our driver spoke some Turkish, part of the collection of languages Sofia speaks, which helped a little with the communication. 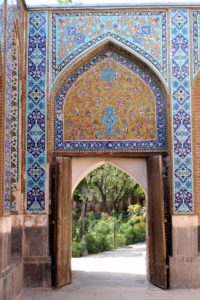 a courtyard in the Sheik Safi-od-Din mausoleum complex 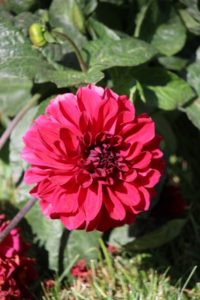 a flower in the peaceful garden of the mausoleum 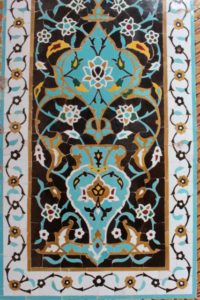 some of the tiles in the courtyard are so delicate 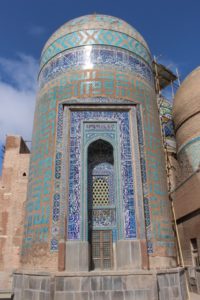 the best preserved cupola in the complex 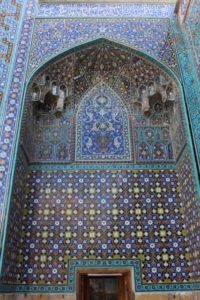 one of the entrances to the mausoleum itself The drive itself? Totally uneventful, or it must have been for the fact that it rained the entire way, and not a little. Explains why this part of Iran is so green. Just past Astara, which is a border crossing, we drove along the border with Azerbijan, complete with barbed wire fences and guard towers. The driver made clear that stopping and taking pictures was absolutely forbidden here. Understandable, of course. Except that all along the road Iranians, defying the sodding wheather, had brought out not only carpets and barbecues – it was Friday again -, but also tarpaulins to stretch over tree branches, and sometimes tied to the fence, so that the weekly family outing would not have to be canceled. And were happlily feasting on their picnic. Knowing the selfie culture in Iran, it would surprise me if they would not also have taken lots of pictures, too. Along the border. 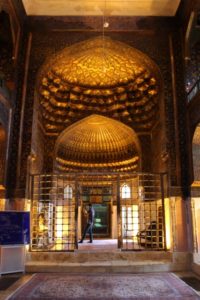 inside the mausoleum, the entrance hall 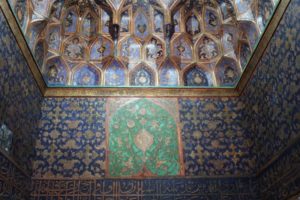 Ardabil then. Seventy km from Astara on the Caspian Coast, Ardabil is already at an elevation of over 1100 m. It has a history as a military outpost, a mountain stronghold, even as an independent khanate in the second half of the 18th Century. But most of its fame stems from the mausoleum of Sheik Safi-od-Din, whose descendents established the Safavid Dynasty, rulers of the third Persian Empire (roughly 1500 – 1780 AD). The mausoleum is a fabulous complex, from the outside perhaps just a collection of cupolas, most of the majolica tiles long gone, but once through the gate one enters an oasis of peace. A walk along a green garden full of colourful flowers leads to a couple of courtyards, where the tiles have survived, and ultimately into the mausoleum. Which consists of several halls and small rooms, all splendidly decorated again, with a lot of gold and blue tiles covering the arches and doorways and walls and ceilings, and with colourful carpets on the floor. One of the halls is called the ‘China Room’, built with niches on all sides to house the Sheik’s collection of over 2000 Chinese porcelain, niches now empty as most of the treasure has been carted off to the Hermitage Museum after a 19th Century Russian invasion (not unlike other colonial powers did, too, in those days). 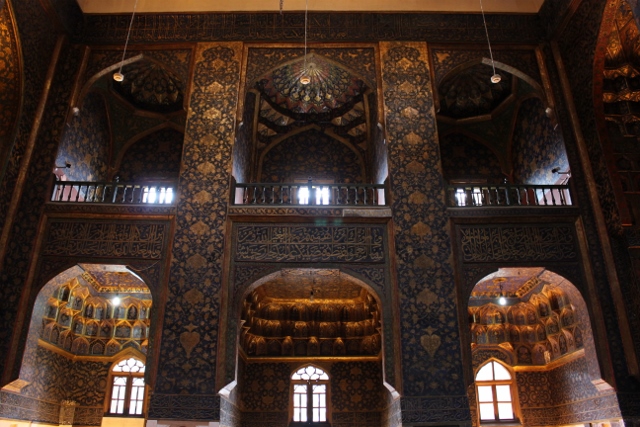 the main hall of the mausoleum, or one side of it, at least 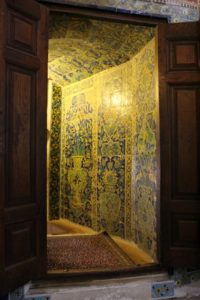 one of the fully-tiled passages 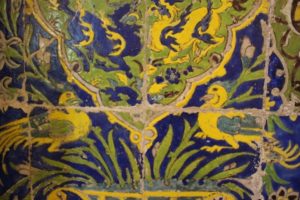 one of the tiles in the passage 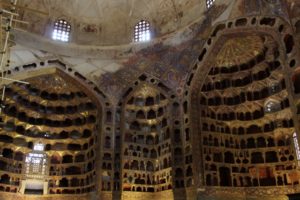 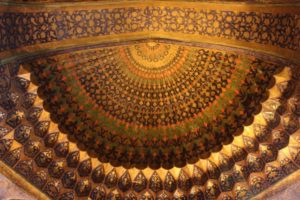 part of the ceiling 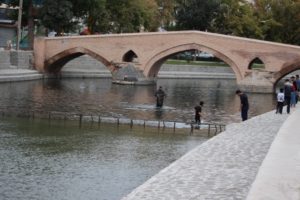 The other interesting architectural highlight in Ardabil are several restored Savavid bridges across the Baliqli Chay, which translates as the Fishy River. In reality, this is mostly a muddy, stinking trickle of water, in which, incredibly, there are indeed big fish jumping up when chased by a couple of men trying to catch them, in front of an audience of spectators. They catch one, and by wading through the water, make the river even more muddy, more stinking, and less attractive, despite the presence of the small Pol-e Ebrahiminad, one of the bridges. 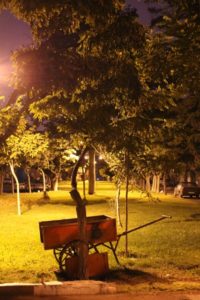 one of the small parks in Ardabil, at night

In the evening I went out to locate the more famous, seven-arched Pol-e Jajim, the biggest of the Safavid bridges. It is much busier now, in the streets, then earlier on, much livelier. Where I thought the bridge was, I encounterd only a building site, heaps of rubble in the river, but nothing more. They wouldn’t have torn down this historical landmark? But when I ask around, a young man and his wife walk me to where the bridge is, a little further downstream. They were on their way anyhow, and they enjoy talking. At the bridge, we say goodbye, I walk on to take some pictures, whilst they disappear into a hamburger joint. But three minutes later the man comes running after me, explaining that he had been scolded by his wife for not inviting me to a drink; you don’t let newly-made friends walk off like that in Iran. No escape. Lovely people.

next: the road to Tabriz; or jump directly to Tabriz 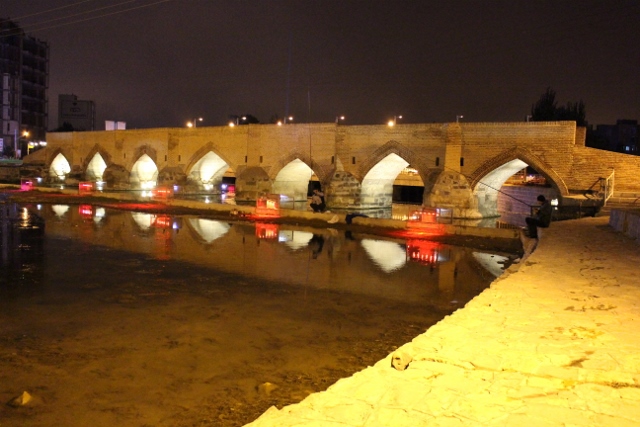