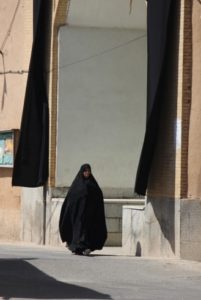 woman passing a mosque decorated with black flags for Moharram

A brief introduction to the Shia mourning period of Moharram, and how it looks in the run up to Ashura.

The schism between Sunni and Shia Muslims is almost as old as Islam itself, and revolves around the succession of the Prophet Mohammed. In Shia eyes, Ali, the son-in-law, should have rightfully inherited the Muslim leadership – and he did, for a short period of time, after initially having been passed over. The real issue, however, came with Ali’s second son, Hossein, who equally claimed the leadership role as his birth right, but was murdered by his competitor to the job, Yazid, the caliph of Damascus, in a battle near Karbala, in present-day Iraq, in 680 AD. 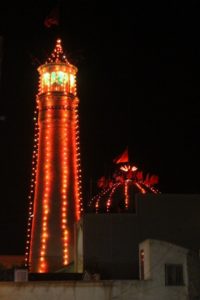 mosque decorated with lights along the minaret and the cupola 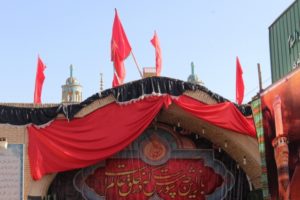 entrance of a tent erected for Moharram

Shia Muslims still mourn Hossein’s death, more than 1300 years afterwards, during the ten days of Moharram, linked to the lunar calander and this year falling at the beginning of October. It is easy to dismiss this, from a Western perspective, as the last convulsions of bad losers, and now get over it, but being in Iran in October, I beg to differ. Moharran is in fact a deeply religious ceremony, in which an entire nation – religion – genuinely participates. This is Religion with a capital R. Our Easter celebrations (perhaps with few exceptions, like in Antigua Guatemala) don’t come close to this. 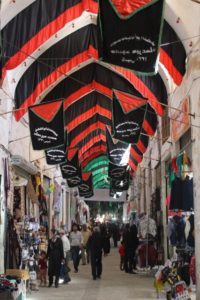 inside the covered bazaar, red and black dominate 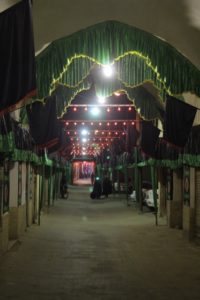 more green and black, and red lights, in an alley 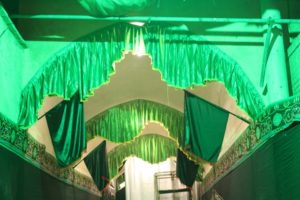 a covered alley decorated, green being the colour of Islam 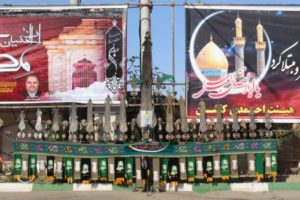 metal structure to be carried during Moharram procession 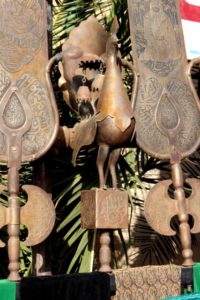 details of the metal are often animal figures 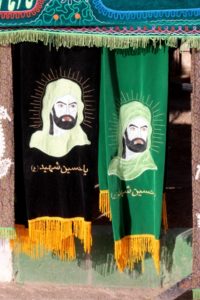 and the face of Hossein is everywhere

All starts, as far as we could see, already weeks before the first day of Moharram, with the construction of huge tents, covering the courtyard of a mosque, or an outside square. Banners in black and green with – I presume – Koran verses are being put outside, in streets and alleys, flags are raised all along the streets, and on top of the mosques, further decorations of coloured cloth and lights are strung across the streets and in the bazaars, strings of coloured lights are being hung along the minarets. Yet, all of this is tastefully done, never ostentatious, never frivolous; after all, we are talking about a mourning period, here. Outside the mosques huge metal structures appear, decorated with metal animals, birds and leaves, sometimes with colourfull feathers, and with multiple portraits of Hussain, as well as a photograph of somebody, perhaps a recently deceased, perhaps a long-dead family member who died as a martyr, I don’t know. 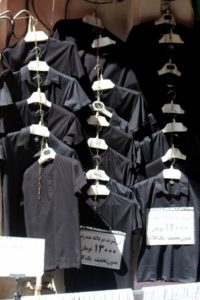 in some of the shops, only black shirst available 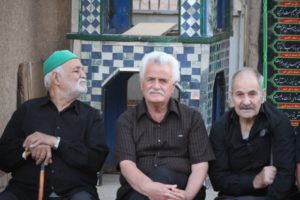 the men have started to wear black 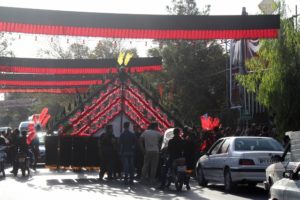 a group of men, crossing the street

Come Moharram, more and more people start wearing black. Of course, almost half of society – most of the women – already wear black the year round, black headscarfs and chadors, but now the men, too, put on black cloths, trousers and shirt. In many clothing in the bazaar shops you cannot buy anything else but black.

Small groups of men – always men – start appearing in the streets, and in the bazaars, black-dressed men with drums, or with a microphone, chanting and re-telling the story of the battle of Karbala. The women look on, as spectators, often at a respectable distance. In make-shift tents the story is also enacted, in a way, with the bad guys in red or yellow, the good guy – Hossain – in green. Apparently, people also organise private parties, where an actor is invited to tell the story, never mind that is has been told so many times already. The closer we come to Ashura, the last day of Moharram and the day Hossain actually died, the more prominent the parades through the streets become, the bigger the gatherings, the more emotional the outpour of grief.

For Ashura itself, the culmination of the mourning period, we had planned to be in Bijar. An experience, see next entry. 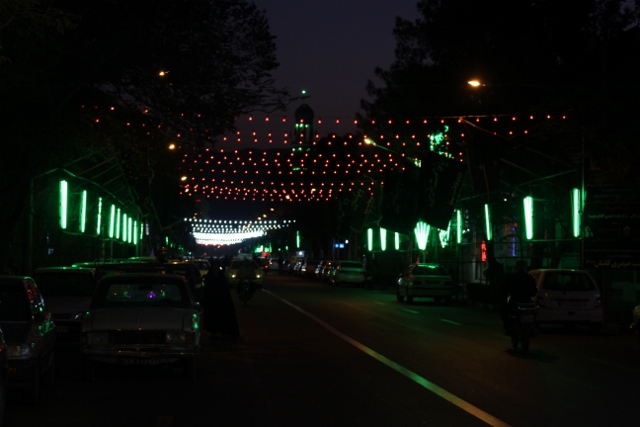