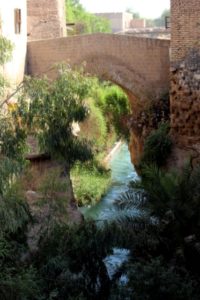 the Pol-e Mostofi, a cute little old bridge in Shushtar

The small town of Shushtar has some remarkable sights, but traces of relatively recent dilapidation abound; perhaps it is the heat.

the proof is in the tablet: it was hot!

And now for something completely different. We have left the mountains of Kordistan, and entered the flat, low-lying land of Khuzestan, further south. The journey by bus is long, but exceedingly comfortable – VIP busses, properly airconditioned, reclining business class seats, no intermediate stops except for lunch. The last 45 minute taxi ride is very uncomfortable. Many of our Iranian aquaintences on the way had warned us that is would be too hot, now, in Khuzestan. We ignored their advice. They were right. We arrive in Shushtar at 6 pm. Late afternoon. And it is still 45o C. 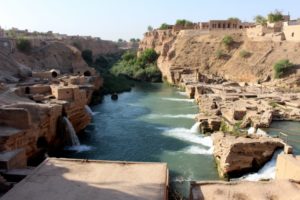 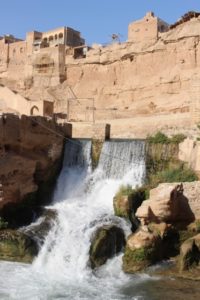 with water chanenled through steep falls 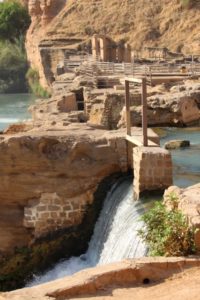 moer of the water system

Yet, Khuzestan is a must on the extended tourist trail of Iran, and we had selected Shushtar as our base, mostly because it has a nice hotel in a traditional house. With airconditioning. 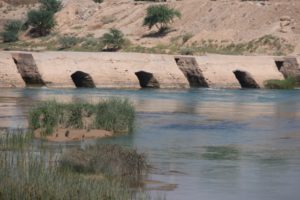 Shushtar is located on the Karoun river, a surprisingly significant river in such a dry and hot area. For many years, Shushtar has manipulated the river flow to provide for irrigation, as well as using the water power for milling flower, seeds and all other sorts of things. To do so, they built an early dam, and forced the water through a multitude of channels and chutes, driving the water wheels. Much of this has been restored, and has been turned into a fascinating site. The dam, the Band-e Mizan that leads the water to the mills, is somewhat less impressive, but, given its 7th Century construction – apparently designed and built by captured Roman slaves – and its ability to raise the water level by some 2 meters, quite an engineering achievement.

Another part of the water system was formed by the bridge, and part-dam, across the river, the Pol-e Shandravan, an impressive, if now ruined, multi-arched structure. Nearby, a smaller river channel is crossed by the still functioning cute little Pol-e Mostofi, and the restored, Pol-e Sengborum, probably from the 19th C.. Close to the bridge is a delapidated mansion, sadly abandoned, and the Sallasal Castle. This was once dominating the river front – and even until the 1920s an attractive three story building, to which many old photos testify -, but now not much more than a pile of rubble. Until you discover the underground chambers, the Shavadun, which were dug out by hand in Sassanid times, up tp 20 meters deep in the rock, to provide for a cool day room, complete with air circulation systems. Or the so-called Darian channel, a partly underground canal, equilly hand-dug, that allowed water to pass from the river into an age-old irrigation system for the agricultural fields further south. Or the ancient stables, now turned into a small museum, with tools and other artefacts, and the historical photos – which show the castle in its 1920 form. 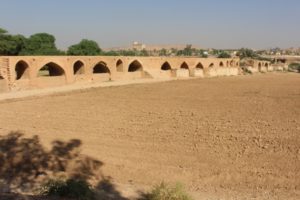 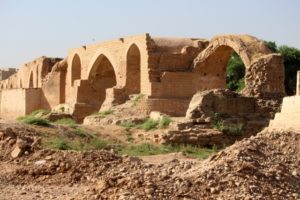 and the same, from another angle, showing part of the ruins 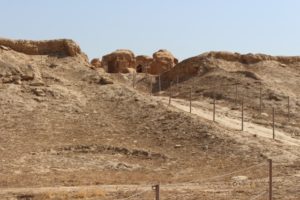 the Sallasal Castle, or what remains of it above ground 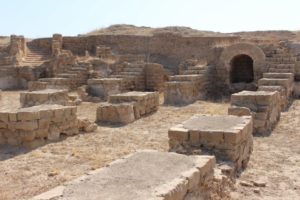 a few more remnants of the castle 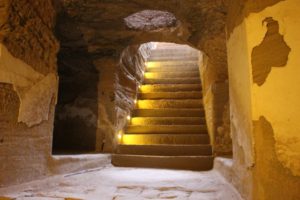 the underground Shavadun, the ‘cool room’ 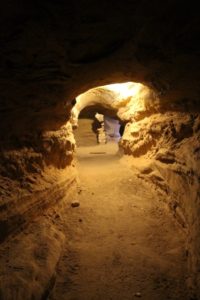 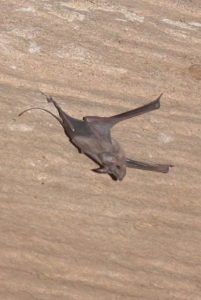 some of the underground chambers are still inhabited (by bats)

Obviously, there used to be many more old buildings in town. Everywhere are the traces, in the form of ruined houses, where the curved arches and niches from the interior are now brutally exposed. Instead of restoration, these are being pulled down, and replaced by phantasy-less, ugly brick cubicles. How ironic that a country that has produced such a wealth of architectural treasures, now seems to have forgotten all about it. 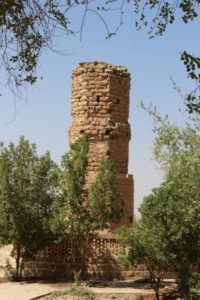 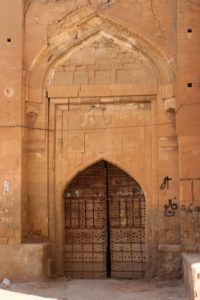 an old door, in an attractive, yet simple arch 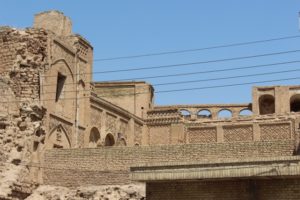 one of the old houses, almost entirely destroyed

Walking the small alleys in between the major roads, everywhere is rubbish, in plastic bags left to rot. And rotting they do – not the bags, but what is inside, generating a pervasive stank in the heat of the day. The occasional dumpster hasn’t been emptied for a long time, and that, too, adds to the smell. Yet, Shushtar is a friendly town, which once again doesn’t seem to get a lot of foreign tourists. After eight in the evening, it gets busier in the streets; people visit the bazaar, the restaurants and the food stalls – falafel and some kind of large samosa are popular. The fast-food joint, a combination of Domino’s, MacDonalds and KFC, is doing good business, although the pizza we had was positively horrible. Back  to the kebabs again, tomorrow! 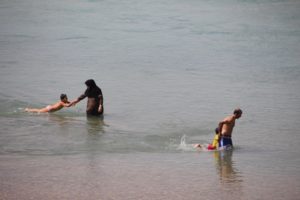 escaping the heat, fun in the water, for the whole family….