19. the Andimeshk to Dorud railway 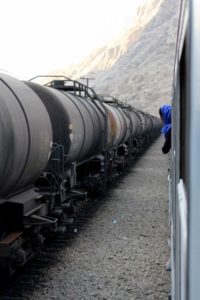 on the single track Andimeshk to Dorud railway the train needs to wait for oncoming traffic, often oil transport

What we thought was going to be a rough train ride, turned out to be one of the most comfortable journeys ever, through fabulous mountain scenery in between the tunnels.

I love train rides, and one of the best train rides in Iran is the one from Andimeskh to Dorud, through the imposing Zagros Mountains. According to the guidebook I have, this is a ‘super-scenic’ railway, but it takes some sacrifices. For starters, ‘the train leaves at 5.30 am from Andimeshk’; it is ‘often overcrowded to the point of sheer mayhem’, and is both a ‘cultural experience’ and a ‘test of endurance’. Right. We are prepared!

In order to make the early departure, we decided to move from our comfortable heritage hotel in Shushtar to Andimeshk (on the way visiting some of the sights in the area, like a ziggurat), even though there is nothing to see in Andimeshk, and the local hotel doesn’t inspire a lot of confidence. Before checking into the hotel, we pass by the railway station, to check on the trains. Where we learn that there is a train at 2 pm, or in two hours time. Sounds a lot better than 5.30 am, and saves us an idle afternoon in Andimeshk. We offload our stuff from the taxi, and take a seat in the – also important! – airconditioned waiting hall of the station. (Incidentally, the only other passenger train seems to leave at 3 am, which defies the purpose of the trip, because by then it is pitch-dark…) 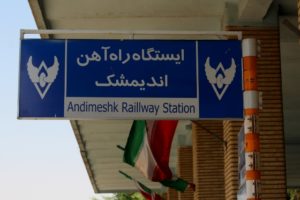 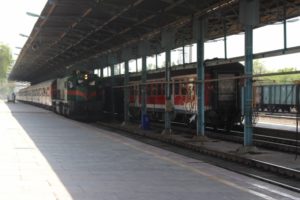 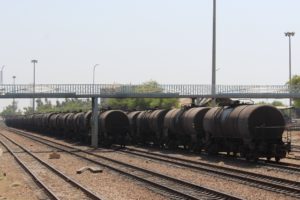 The train arrives a little before 2, even. There are indeed a lot of people getting on, but according to our ticket we have reserved seats. With some help of bystanders we get into what we think is the right carriage, which is divided in several 6-seat cabins, and into the right seats, only to be told by the head steward in the train that we are wrong, and need to move to carriage nr 8. Which is not very full, but our seats are occupied by some women, who flatly refuse to have others in their cabin. Upon which the steward walks to another cabin, still empty, unlocks it for us, and tells us to stay put. Who are we to argue? For the next six hours we have a six-seat cabin for ourselves. Overcrowded? Endurance? 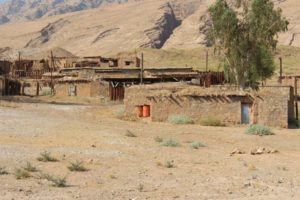 a village along the railway line

In fact, the only hardship comes when the trian is not moving. There is no AC, and the air-circulation system works by having all windows open, a system that doesn’t function very well with a stationary train. So sometimes it is hot, very hot. But our friendly steward comes along with water, and with tea, and when we share some of our fruit with him, he feels obliged to buy us icecream. And he makes sure, that nobody gets into our cabin. 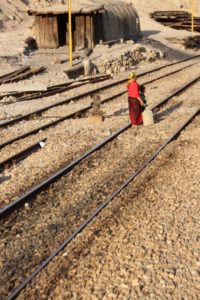 The cultural experience only comes when we venture outside the cabin. Soon, the entire train is aware of the foreigners, and the entire train has to have a look. And try a conversation. Which fails, of course: that language barrier again. Although I don’t understand the first question, I know the answer: ‘I am from Holland’. What also works: ‘Iran good!’, with thumbs up. Then the entire train needs a selfie with the foreigner. Equally tiring. Our own fault, of course, we should have kept the door of the cabin locked. 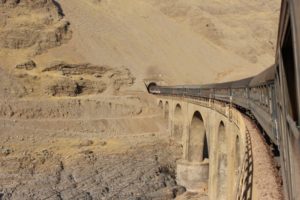 But then we would have missed half of the scenery. Which at times – when the train is not thundering through the many tunnels en route – is indeed breathtaking. Bare landscape, as so often in Iran, but with steep, craggy mountains, towering rock faces, a feast for the geologist (the structural geologist, for those who care). And also for the oil companies: the first part of the trip is home to quite a few oil fields, visible from the train. For some part the track follows a river valley, where the occasional village exists, and where the train even stops to take on or drop passengers. Or waits to let an oncoming train pass; most of the line is single track. But mostly the train runs through seemingly uninhabited terrain, of spectacular beauty, untouched by humans – except for old track that is just being discarded along the route, without any attempt to take it away. Yet, here too, the inexhaustable infrastructure drive of Iran is visible, in new road construction, and in railway improvement projects. 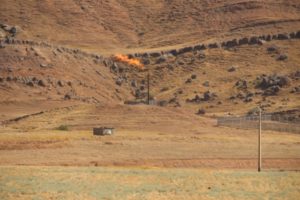 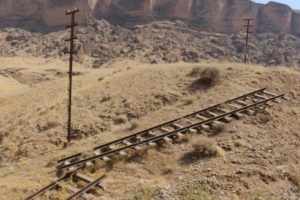 old traack has been discarded, and dumped 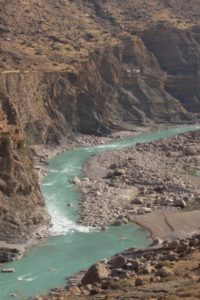 one of the rivers along the track goats, too, use the tracks

By 7 pm the sun has sunk behind the mountains. And when we arrive in Dorud, an hour later, it is dark, except for the full moon. Our friendly steward comes by one more time, to tell us we have arrived. From one of the most comfortable train trips ever.

See for some of the scenery the gallery below.

next: one of Iran’s highlights, Isfahan 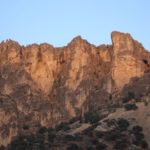 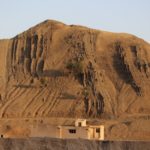 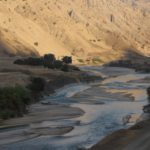 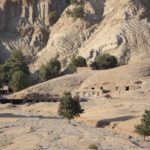 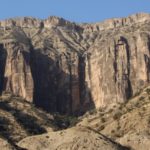 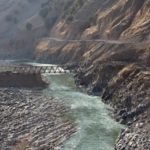 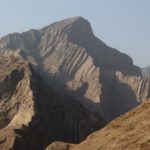 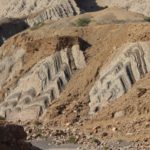 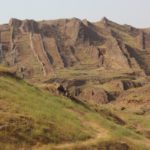 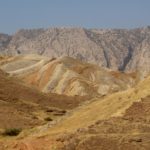 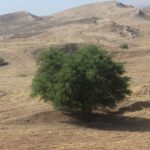 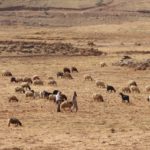 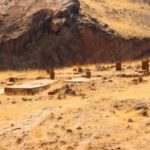 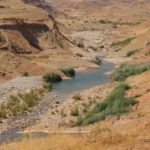 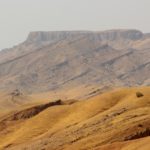 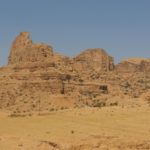 4 Responses to 19. the Andimeshk to Dorud railway