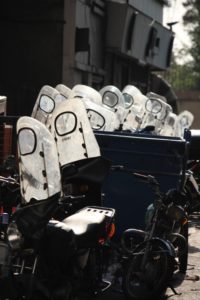 motorbikes as part of the Tehran street scene

Modern Tehran is not particularly pretty, but there are hidden gems, and the people make up the rest, to provide for a friendly and relaxed atmosphere – if you forget about the traffic.

Any notion we may have in the west that Tehran is a somewhat backward place, is wrong. Modern express ways, linked by complex fly-overs, lead into the city. A slick metro system connects the suburbs, and provides rapid transport from one neighbourhood to another. The shop windows, as well as in apartments, have the latest and the biggest flatscreen TVs. Everybody has his or her smartphone ready (I haven’t seen any Pokemons, though…); a 16-year old kid teaches me with a couple of expert swipes, how to bypass the Google Playstore, before setting me up for mobile internet. 4G, no less. 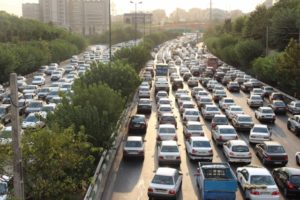 There are some complications, though. With a car fleet that does not only contains the newest Korean 4×4’s, but also a significant number of aging vehicles, including the ancient, home-grown Paykan automobiles (out of production since 2005), plus thousands of motorcycles, used by many to bypass the traffic jams but in fact adding more than anything else to the chaos – perhaps with the exception of the driving style of the average Tehrani -, the noise and the smell in the streets are at times unbearable. Traffic is dense, very dense. The metro was supposed to alleviate this, but apparently, there are still more than 2000 cars being registered per day; people complain that the metro is too busy. Add the occasional hand-drawn cart, and you get a good overview of Tehran traffic. (To stop motorcyscles from using the pavement, obviously a much-used technique to bypass traffic jams in the past, the municipality has placed knee-high metal poles at the edges of pavements, allowing pedastrians only to pass.) 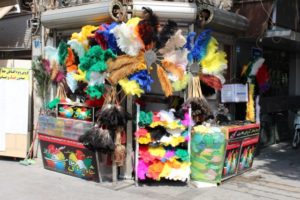 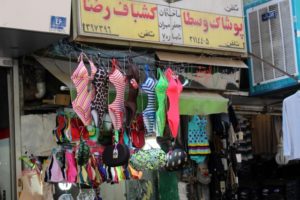 no discussions about burkinis here!! 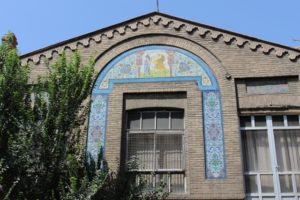 occasionally one finds a little gem along the streets

Crossing the road is, well, a hazardous excercise. There are overground passages at the busiest of intersections, but often enough one is forced to risk life to get from one side of the street to the other. My favourites are the one-way streets, which are not always really one-way, because a bus lane at the far side may actually go the other direction. And if there are no busses, is being used by motorcycles to go the other way. Or motrocycles in opposite direction, to avoid the traffic jam. So once you have finally managed to cross the three lanes one way – which in fact means five lanes of cars -, an unexpected bus, or motorcycle, or both, may still lurch at you in that seemingly empty last lane. 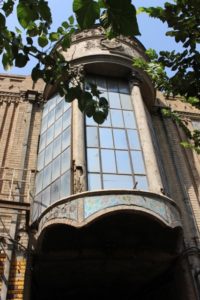 another old architectural gem in just a street 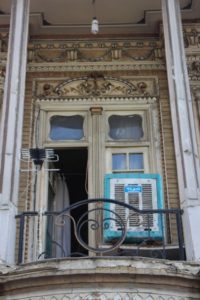 and an old, decorated balcony, now with antenna and airco

Still, we survived our first days walking through Tehran. In itself an interesting experience, without the need to actually go and see any of the sights. There is a tendency for shops in the same branch to concentrate: lamps and chandeliers in one street, shoe shop after shoe shop in another, seamlessly changing into hand-bag street, before we reach ‘ wedding invitation street’ – seriously, at least 500 meters of shops specialised in wedding invitations only! Oh, and there is even a section with fish mongers, which announced itself by the smell, from the other side of the street. But great fish! 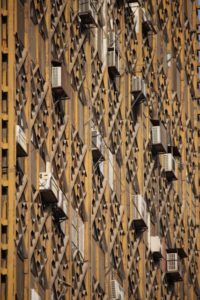 Most of Tehran is not particularly beautiful. There are obviously no building rules governing esthetics, and concrete new buildings of uncertain style rub shoulders with dilapidating old structures, often only held together by extensive scaffolding, or so it seems. But occasionally one discovers a dusty old pearl amongst the street fronts, an almost collapsed, decorated balcony, some old windows, or a majolica tile decoration that was once blue, but now greyish brown from pollution and lack of cleaning. Or one discovers the Tehran theatre front, of which the door obviously closed long ago. 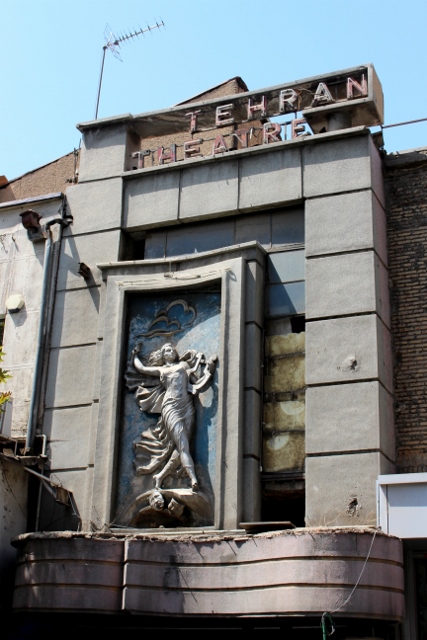 the front of the Tehran Theatre, long closed 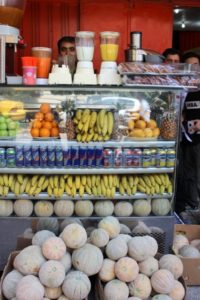 Downtown Tehran is a lively business; the pavements are full of people. Which creates a market for fresh juice stalls, that briskly sell their freshly pressed carrot juice, or mango, or melon, or any other. All – or most – of these people are mightlily curious about foreigners, yet ever so friendly, ever so polite. The lady at the table next to us in the restaurant, who asks whether we mind her smoking, only to have created a bridge to start a conversation; she never lit up her cigarette. The shop keeper, who in impeccable English, strong British upper class accent, tells about his paint mixing techniques – using glittery nail polish to create gold- and silver paint. The boy in the metro who, seeing us studying a network map, asks if he may help us. The casual passer-by who says ‘hello’, or more often, ‘welcom to Iran’. A taxi driver who offers his services, but immediately backs off again when we decline; a money changer or a waiter outside a restaurant who solicits our clientele, but never keeps on nagging after a polite ‘no thank you’ – in how many other countries is that still the case? 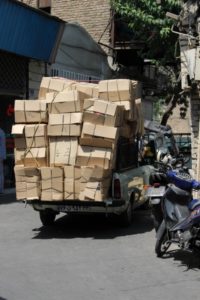 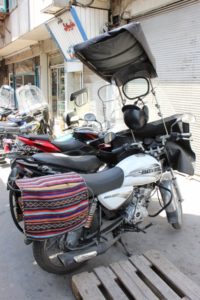 the latest motorbike design, with sun roof and saddle bag 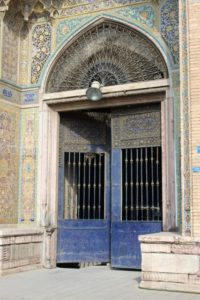 just the entrance of a madrasse, nothing mentioned in whatever travel guide 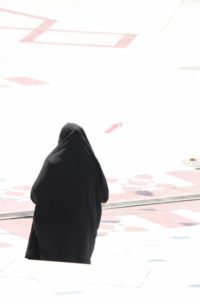 this, too, is the street scene in Tehran

Talking about money changers, Iran has a funny financial system. The official exchange rate at the banks is about 15% worse than what you get at moneychangers, who openly operate in the streets near the touristic spots, and at the exchange kiosks on Ferdowsi Street that buy and sell dollars, Euros, or any other current currency. They give you Iranian Rials for your money, at a rate of 35,000 to the US$ making you an instant millionair with less than a 100 dollars. But prices are mostly quoted in Tomans – which don’t exist, there are no Toman notes or coins, yet everybody knows that there are ten Rials in the Toman. Alternatively, prices are quoted without the zero’s, but you need to know that this is the Toman zero’s, not the Rial zero’s. Very confusing to the first time visitor, yet, nobody seems to take advantage of us uninitiated; taxi drivers quote a fair price, the cost of a fruit juice in the streets seems pretty normal – we cannot really check the prices, of course, because they are all in Farsi, including Farsi script! 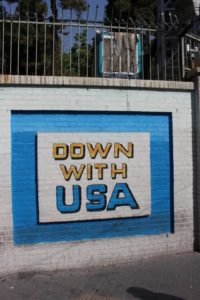 and I could not not include this one, of course – but a-typical for Tehran, these days

All in all, Tehran and its people combine to a pretty relaxed atmosphere. Which is not something you would have expected upfront, if you had believed our Western media.

next: the touristic sights of Tehran 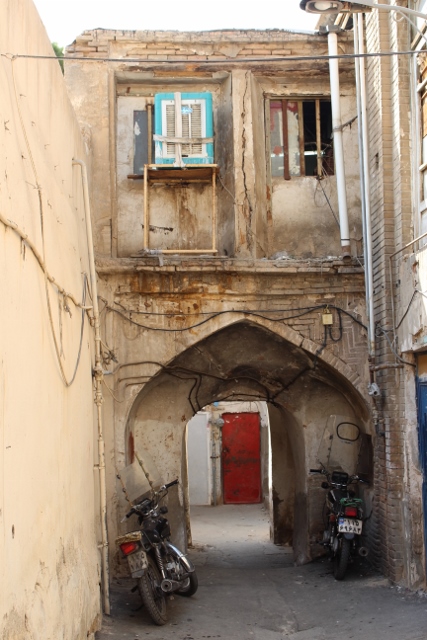 the result of purposelessly wandering through Tehran