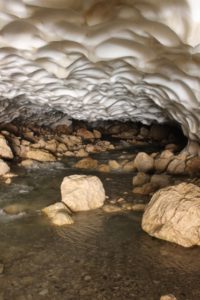 ice cave in the Zagros Mountains

An unexpected phenomenon in the Zagros Mountains above Isfehan makes for an interesting day trip, featuring nomads and cold feet.

After a couple of days in Isfahan, after an overdose of turquoise tiles and tree-lined avenues, it is time for some variation again. Through the travel section of the BBC website we knew about a rather unexpected phenomenon in the Zagros Mountains nearby, a real glacier. And a contact number, which worked.

Farshid picks us up early morning, and off we went in search of ice – not the icecream variation so abundently present in Iran, but the real thing. A couple of hours drive further we see the first white stuff, but this turned out to be some local saltworks, where villagers had diverted part of the river into ponds, to have the water evaporate. The resultant thick salt blocks mean that the water must be pretty salty to start with. 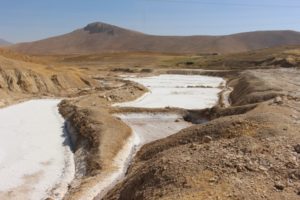 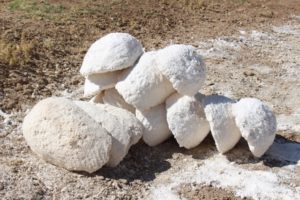 with quite some significant salt blocks as result 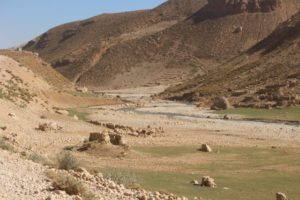 the upper ranges of the Zayandeh River, that flows to Isfahan

Just past the town of Chelgard, we swap cars, from the comfortable saloon into the back of a sturdy pick-up: our own personal Zaymed in standard blue. This is nomad country, there are tents all over. Well, nomads is maybe too much said. These people, from the  Bakhtiari tribe, move every year for three to four months to their summer pastures, with sheep and all. But come end of September – and the beginning of the school year -, they move back to their homes in Khuzestan, and these are proper homes. The tents, too, are solid affairs, many placed on a concrete base, often with the lower walls reinforced with large bricks. It is not that these are wandering tribes, they move back and forth between fixed locations. Still, a significant effort. And, given the heat back home – which we can testify to -, not a bad decision. 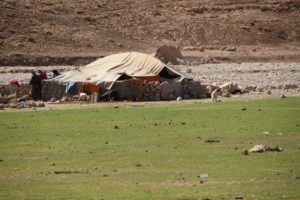 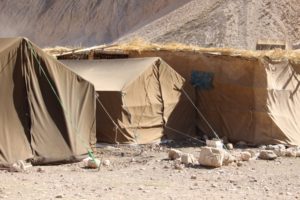 tents in the camp near the gorge 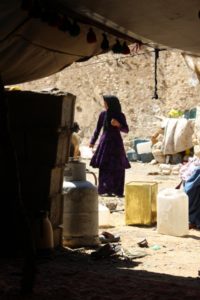 view from one of the tents 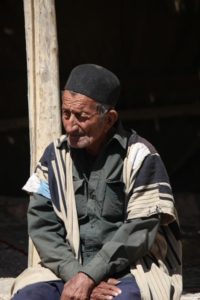 one of the Bakhtiari men in the camp 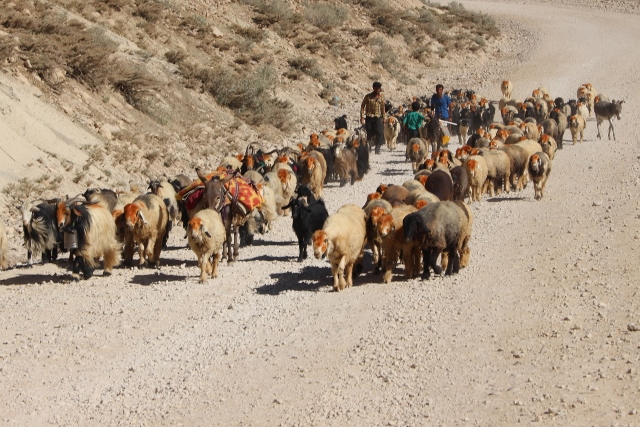 the first sheep are already on the move 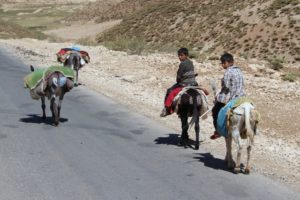 the sheep flocks are accompanied by donkeys 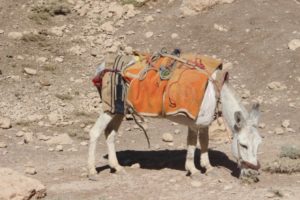 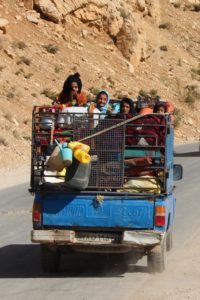 some of the nomads move by car, these days – the old Zaymed, once again

After another 15 or 20 minutes in the back of the pick-up, following the Chama Valley, we arrive at another nomad camp, at the entrance of a small gorge. We are not the only ones, Iranians have also discovered this place. Farshid had told us to bring slippers, but the nomads have quickly caught on to the tourists and their needs: you can buy slippers locally, and there are other stalls, too, socks, shawls, the obligatory honey, albeit fairy small scale. In any case, next week the business will be over, when the nomads have returned home. 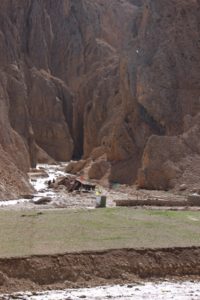 the entry to the gorge

The slippers come in handy: it turns out we have to wade for a couple of hundreds of meters through the stream, relatively fast flowing, and, literally, ice cold. After a minute, or so, your feet are numb, you don’t feel anything anymore. So I also don’t feel my left slipper disappear, only notice it when I get out on a small piece with dry rocks, not even half-way. Farsid has all experienced this before; he caught my slipper on the way down. Lucky me, doing this entirely bare feet would be an even bigger attack on the body. 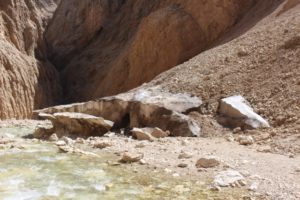 the first piece of ice, from an almost melted smaller ‘glacier’

We wade further, sometimes moving from rock to rock, sometimes shuffling along the side, to keep on our feet against the strong current of the water. Somehow, we get used to the cold water. We pass a piece of compacted snow, a ‘glacier’ that already has almost entirely melted. But a little further our reward is waiting. A large piece of snow and ice is blocking the gorge. The river itself goes through underneath, creating a spectacular ice cave. Wandering in, the water is not only at my feet, but also in my neck, from melting ice. I am not sure whether this qualifies as a proper glacier, but the effect is quite impressive, snow and ice at the end of summer in Iran. 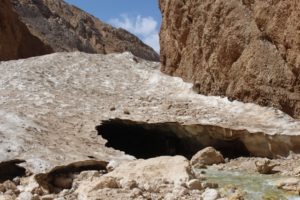 the traget of our trip, a large plug of ice and hardened snow 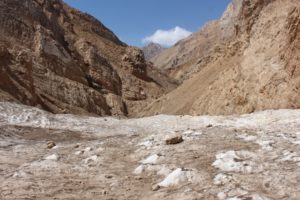 the ice is dirty, and muddy, but still slippery! 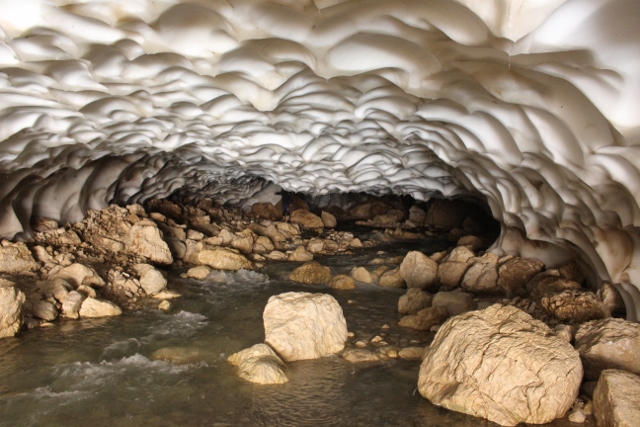 under the plug, an impressive ice cave has developed and this is the cave on the other end 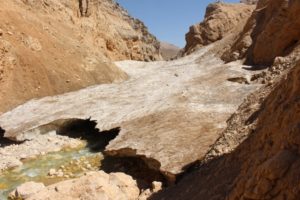 the ‘glacier’ from above 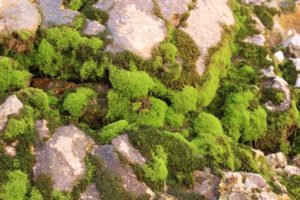 even here, there is some life, in the form of mosses that benefit from a small cascade

According to Farsid we are at well over 3000 meters high, here, and not surprisingly, it is nice and cool, a reprive from Isfahan. Putting on our shoes again, we scramble over the ice to the other side of the blockage, not a very difficult climb. Indeed, the ice sheet doesn’t continue very far upstream, there is little continuity, and little permanence in this ‘glacier’. Still, it is something special, indeed! 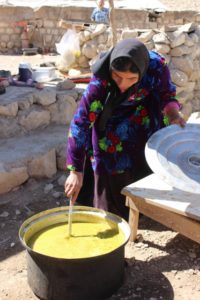 back in the nomad camp, time for a cup of ash, tasty bean soup 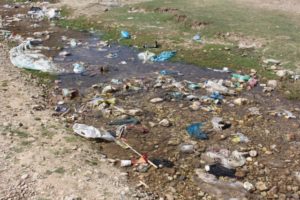 the result of a summer’s camping

Back in the nomad camp we have a late lunch, a cup of bean soup and fresh lamb kebabs – you cannot get them any fresher than this. That the kebabs contain not only fresh meat, but also lamb kidney and lamb heart (lamb liver is finished), is part of the game, part of the nomad’s menu. More disturbing is that the valley is full of rubbish, plastic battles, bags, everything is being thrown away. And blaming this on the tourists alone is unfair, I think, the amounts are such that this is more likely the result of a summer’s camping. Why is it that people litter their own environment? After all, they do come back here, next year again. Would the winter, with much bigger quantities of snow and ice than we have seen today, have cleared the rubbish? To somewhere further downstream, like Isfehan, perhaps? 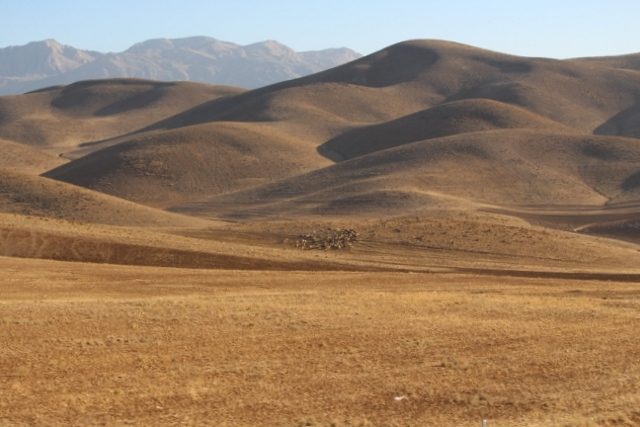 the landscape on the way back, with a few sheep left